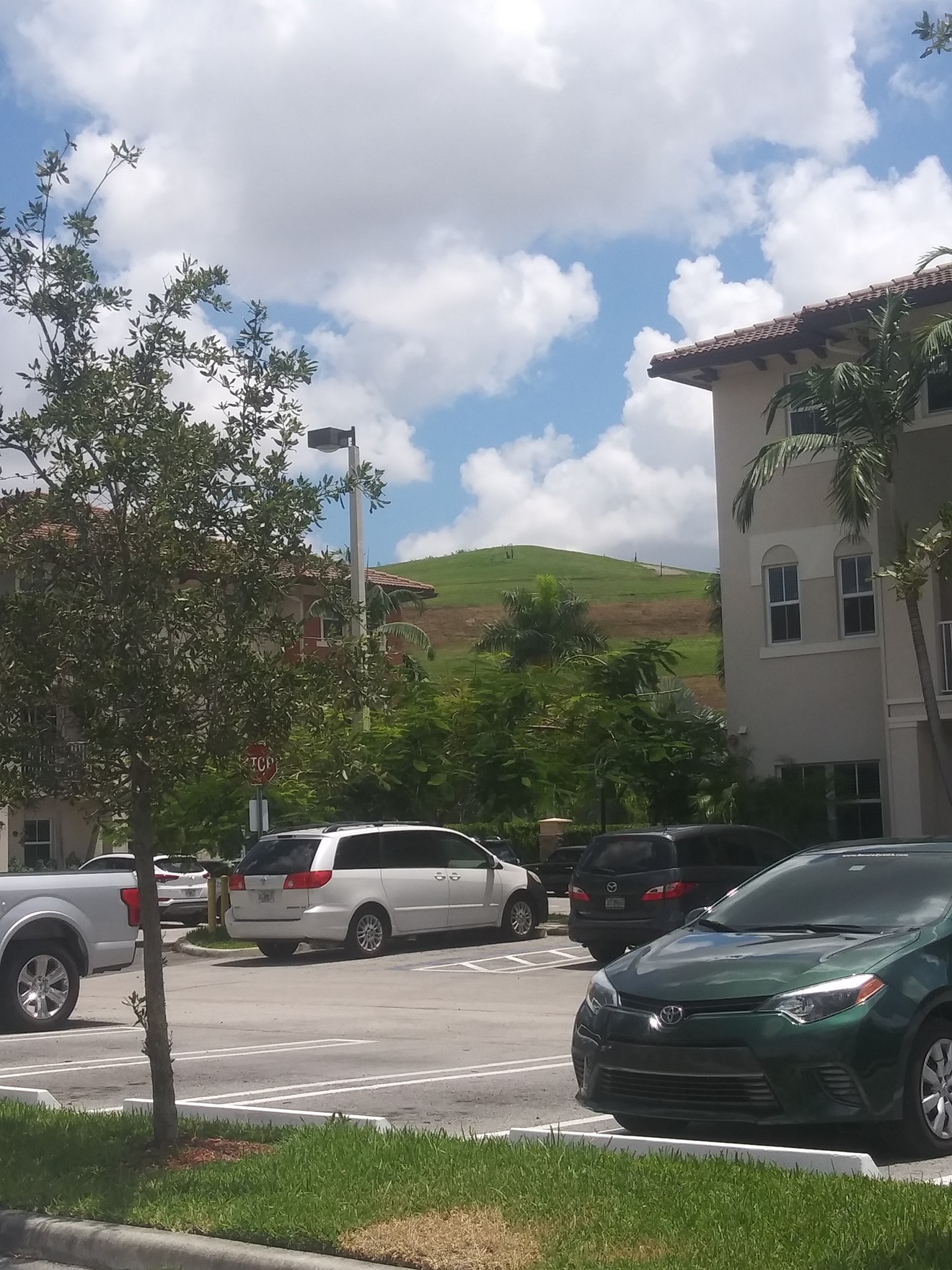 View of the Medley Landfill, AKA "Mount Trashmore," from the parking lot of the St. Maarten condo complex in Doral. Photo by Joshua Ceballos
A few months ago, Jennifer Diaz rented a condo for her 64-year-old mother in Doral. She had heard there was a garbage dump nearby, but for the price, she thought it would be worth it. When she moved her mother in, neither of them expected to be next-door neighbors with "Mount Trashmore" — the Medley Landfill.

Located at 9350 NW 89th Ave., the landfill has been in operation since the 1980s. The site, which takes in 800,000 tons of garbage per year, was supposed to reach maximum capacity by 2032. But now, the company that runs the dump is trying to obtain a permit to extend its life and expand it 75 feet higher into the Miami sky.

This past May 13, Waste Management submitted a permit application to the Florida Department of Environmental Protection (DEP) to raise the maximum height of the trash mountain from 265 to 340 feet and allow the company to continue to add waste into 2035.

Although the landfill has the distinction of being one of only a few elevated pieces of geography in the county, some neighbors aren't too happy about the proposed expansion. Residents of the St. Maarten condo complex in Doral, which is located across the street from the outer edge of the dump site, say the landfill is already a big nuisance — and they don't want it to get even bigger.

"Sometimes on a hot day, the smell from the landfill makes you want to vomit and you have to run inside," says Diaz, age 40. If the landfill grows, she says, it'll be a big problem for her and her mom.

Waste Management tells New Times that it has a contract with Miami-Dade County to provide waste disposal services until 2035 and that its proposed expansion is simply to put the company in line to finish its contract. Representative for Waste Management would not comment on what it would mean if the permit were denied.

A DEP spokesperson says the department initially planned to grant the permit for the expansion but later received an outpouring of public requests to deny it. Now state officials say they will discuss the topic of the landfill expansion at an administrative hearing.

"On July 18 and 19, 2019, the Department received 50 requests from private citizens and one request from the City of Doral who requested an extension to file a petition for an administrative hearing," the DEP said in a statement. "As a result of the multiple requests... the issuance of the final permit modification for the proposed vertical expansion by the Department will be delayed until the conclusion/resolution of the administrative hearing process."

Local resident and former environmental engineer Ann Ryan is one of the individuals rallying Doral citizens to call for the landfill's closure. In her Facebook group End Medley Trash Operations, Ryan calls for locals to send letters to the state by Thursday to push for a hearing and stop the expansion.

"Within the next two decades, that landfill is gonna look like a fucking pyramid," Ryan, who's been fighting the landfill since 2014, tells New Times.

Waste Management says it has been in "full compliance" with regulations throughout the time the landfill has been in service, and there shouldn't be complaints about its work.

The Medley Landfill was written up by the Florida Department of Environmental Resources Management for above-normal levels of arsenic in March 2015 and for odor complaints in March 2016, according to Miami-Dade County documents. Records show Waste Management has worked to remedy issues pointed out by the county and met compliance for hazardous chemicals. However, odor complaints continue.
KEEP MIAMI NEW TIMES FREE... Since we started Miami New Times, it has been defined as the free, independent voice of Miami, and we'd like to keep it that way. With local media under siege, it's more important than ever for us to rally support behind funding our local journalism. You can help by participating in our "I Support" program, allowing us to keep offering readers access to our incisive coverage of local news, food and culture with no paywalls.
Make a one-time donation today for as little as $1.