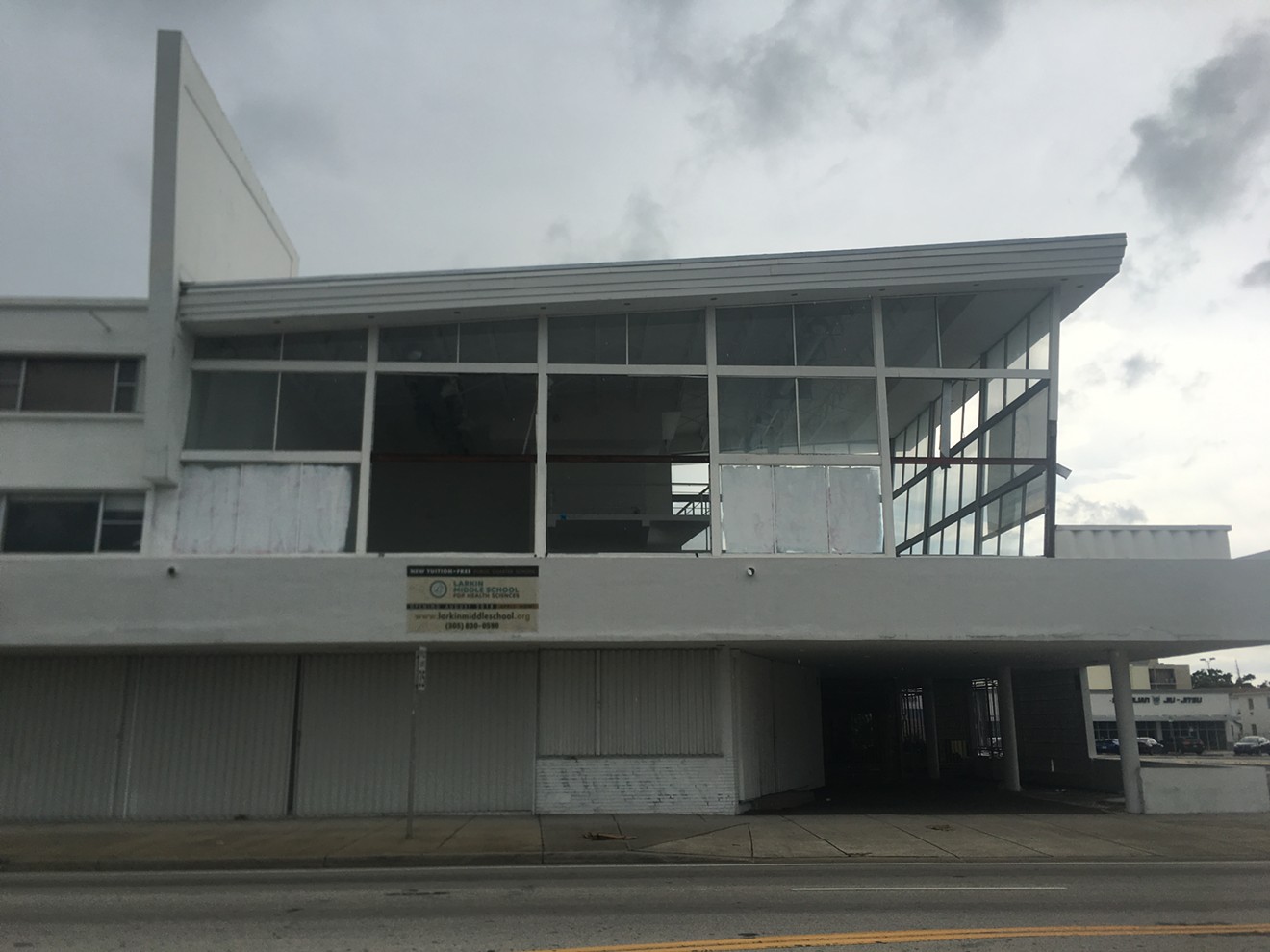 Photo by Jerry Iannelli
After 12 elderly patients died during Hurricane Irma at the Rehabilitation Center at Hollywood Hills in Hollywood last September, South Floridians were not stunned to learn that the doctor who owned the facility, Jack Michel, had a history of fraud complaints. As WPLG's Bob Norman noted last November, nothing stopped Michel — who owns the Larkin Community Hospital network — from opening a nursing home after previously paying a $15.4 million federal fine to settle Medicare and Medicaid fraud claims in 2007. Since then, several Larkin doctors also have been criminally charged with fraud.

Michel reportedly owns the historic Admiral Vee Motel building at 8000 Biscayne Blvd., a striking MiMo-style structure that film producers used as the Sun Gym in the 2013 Mark Wahlberg and the Rock movie Pain & Gain. The building has been in a state of disrepair for years, with busted windows, water damage and homeless people sleeping under the breezeways. Last March, the Biscayne Times chronicled how Michel had let the once-gleaming property decay.

But recently, someone has slapped spiffy new signs on the side of the building advertising the "Larkin School for the Health Sciences," a charter school serving kids from grades 6 through 8. The signs say the school will open in next month.

A New Times reporter visited the facility on Wednesday, and the building is still missing windows and strewn with garbage. But the school published a press release last February asking parents to apply to send their children, and on the website Glassdoor show the school looking for a principal just 12 days ago.

Back in 2016, Larkin Hospitals announced that Miami-Dade County Public Schools had approved its charter-school license that March. The state Department of Education says that the school currently has a license to operate. Both officials at the school and media representatives for Larkin Hospital did not respond to phone calls and messages from New Times today.

Photo by Jerry Iannelli
According to the South Florida Business Journal, Michel has been working on opening the school since at least 2013, long before the hurricane-related deaths occurred at his nursing home, but also years after he paid a fine for allegedly defrauding the government.

According to a Miami-Dade County Commission briefing on Larkin Hospitals, Michel bought the medical chain in 1998 from a doctor named James Desnick. In 2004, the federal government unsealed a civil fraud case against Michel, Desnick, and others; prosecutors said the group used "an astonishing array of kickbacks and interconnected seniors living facilities to bring elderly patients who frequently had little or nothing wrong with them.” In 2006, Michel and others agreed to pay the $15 million fine to resolve the case. They were never criminally charged.


New public middle school opening in #Miami, #Florida, in August 2018. Applications are now being accepted for grades 6 and 7. Online enrollment applications and additional information are available at our town hall meeting and at https://t.co/gW9Rmk43Ge pic.twitter.com/or1LzW9eU4

Then came Hurricane Irma. In a story that made national headlines, the Rehabilitation Center at Hollywood Hills — a 141-patient nursing home facility that Larkin owns in Broward County — infamously lost the use of its air-conditioning unit during the storm and turned into a 99-degree oven where 12 elderly residents eventually died of heat exposure.

Once reporters began looking into the facility, they found what sounded like a horror story: According to the South Florida Sun-Sentinel, state regulators who reviewed patients' medical records found that four out of five residents living on the building's second floor had suffered from dehydration, as did nearly half of the 71 patients on the bottom floor. The Miami Herald later obtained video of the conditions inside the facility before the storm hit: The clip showed elderly patients lying nude inside the building. Family members have repeatedly questioned why the facility did not call 911 in time to save the patients' lives.

The Broward County Medical Examiner eventually classified the deaths as homicides. Multiple families have since sued the hospital chain for wrongful-death claims. The center's license has been revoked.

Michel and Larkin now want to transition into educating kids. Florida's charter schools operate with infamously little oversight: A 2011 Miami Herald investigative series noted that the half-billion-dollar charter-school industry in Florida is run by for-profit management companies and private landlords and is "rife with insider deals and potential conflicts of interest." The Herald uncovered cases where cash-strapped schools taught children inside tool sheds, shuffled money around in bizarre shell-game schemes to make facilities appear financially solvent, and used illegal tactics and hidden fees to suck extra money out of students. In 2015, the state enacted stricter requirements on prospective charter-school operators, but critics say enforcement is still far too lax across the state.

Larkin's building on Biscayne Boulevard looks far from being ready to house kids by next month, but Michel and other Larkin employees did a social-media push and town-hall-meeting tour earlier this spring to promote the school. Michel and his team held one meeting inside the building at 8000 Biscayne. The staff said they were "in the process" of interviewing school principals and from there would move on to hiring teachers.
During the gathering, Michel pitched the school as a unique educational opportunity. "The one thing that's different about this school is that there's nothing like it in the country, that we're aware of," he said.

Michel said he wasn't interested in opening a chain of schools — he said that Larkin instead wants to use the facility to train future Larkin Hospital employees. "If you want to create your own talent," he asked, "why not create it with local kids?"
KEEP MIAMI NEW TIMES FREE... Since we started Miami New Times, it has been defined as the free, independent voice of Miami, and we'd like to keep it that way. With local media under siege, it's more important than ever for us to rally support behind funding our local journalism. You can help by participating in our "I Support" program, allowing us to keep offering readers access to our incisive coverage of local news, food and culture with no paywalls.
Make a one-time donation today for as little as $1.