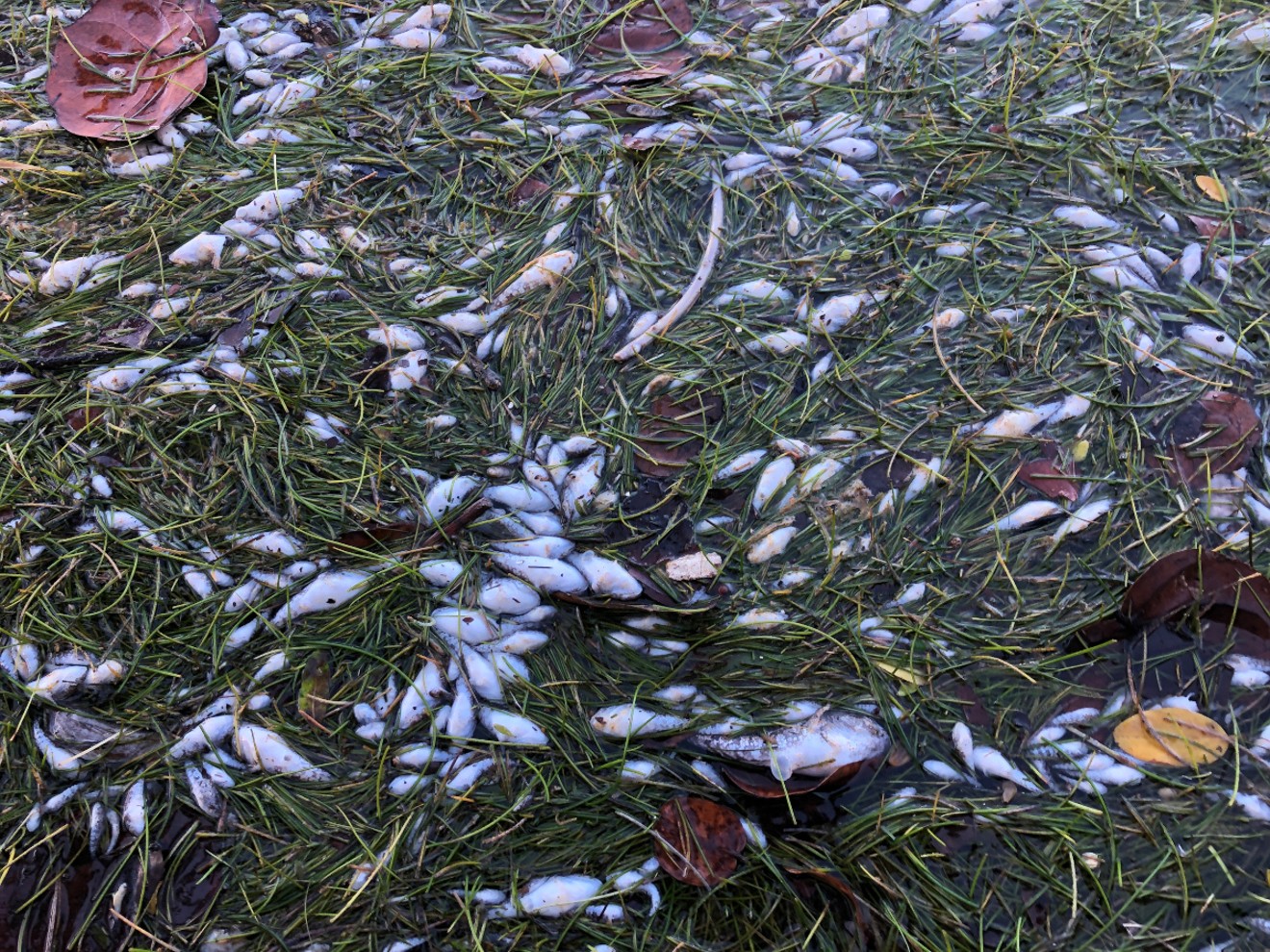 Fish are dying in Biscayne Bay. Photo by Kathryn Mikesell
Update, August 13: Tests reveal that water samples from Biscayne Bay have normal levels of chlorophyll, meaning there's no evidence of algae blooms at this time, according to Miami Waterkeeper. But the samples have low levels of dissolved oxygen, creating an environment where hydrogen sulfide gas can invade the cells of plants and animals. Miami Waterkeeper says the lack of oxygen in the water is likely because of the ongoing seagrass die-off in the bay.

For the past five years, Kathryn Mikesell has spent at least three days a week taking a morning swim in Biscayne Bay.

But when she went to jump in near Morningside Park yesterday morning, Mikesell saw several dead fish floating on the surface of the water. At first, she thought some fishermen might have dumped their bait. Then she started seeing them everywhere: dead flounder, lizardfish, pufferfish, mullet, and more.

"There were just dead fish on the entire swim," Mikesell tells New Times. "I've never seen anything like this."

State and county officials are now investigating what appears to be a widespread fish kill in the bay between the Venetian and the Julia Tuttle causeways. Miami-Dade inspectors believe the water has become so warm that there's not enough oxygen for marine life to survive, according to Tere Florin, a spokesperson for the county's Department of Environmental Resources Management (DERM).

"While we cannot be absolutely certain at this time, it appears that the very high temperatures and very low dissolved oxygen levels in the shallow waters...are likely contributing to or driving the situation," Florin writes in an email. "This is because the hotter the water is, the less available oxygen becomes."

Silverstein says that when dirty stormwater, pet waste, fertilizer runoff, and other forms of pollution get into the water, it can cause the growth of algae blooms, which then suck up all the oxygen.

"Scientists have been warning us that Biscayne Bay is at a tipping point for nutrient pollution for years now," she says. "I think this is a sign of an unhealthy ecosystem."

Scientists have been warning about a "tipping point" in Biscayne Bay for years. We've seen the consequences: algae blooms, seagrass die-offs, and now... fish kills. Our sampling team and members of the public sounded the alarm on this fish kill near Morningside Park earlier today. We notified the proper agencies and will be sending water samples to FWC to check for harmful algae bloom toxins. What we know so far is that dissolved oxygen levels in the water near the location were very low and temperatures were very high. Nutrients from fertilizers, septic effluent, sewage spills, pet waste, and more can feed algae blooms and lead to low oxygen conditions in the water column -- causing fish kills. Please contact us if you have seen anything related to this fish kill event. We will be posting updates as we receive them. And remember, we offer a free pollution training to help you identify, document, and report incidents like this one that you may see on the water. Learn more about 1000 Eyes on the Water with the #linkinbio Want to do even more? Learn more about how to reduce your nutrient footprint with the #linkinbio Photos courtesy of Kathryn Quinlivan Mikesell

Miami's problem with pollution in the bay, which has been extensively documented, is compounded by rising temperatures due to climate change. Florin says the water temperature measured 90 degrees yesterday.

DERM inspectors have collected specimens of the dead fish to send to the Florida Fish and Wildlife Conservation Commission. Miami Waterkeeper volunteers also will continue to monitor oxygen levels and send water samples to Fish and Wildlife to check for algae-bloom toxins.

Silverstein says fixing Biscayne Bay requires action on multiple fronts: passing an ordinance limiting fertilizer use, repairing sewage infrastructure, getting rid of septic tanks, and more. Although there's no easy solution, she says it’s imperative that local governments work together to prioritize the health of Biscayne Bay — and soon.

"We know what we need to do; we now need the will to do it," Silverstein says. "This is the big red flashing arrow that there’s a problem, and we need to take notice and make sure it doesn’t get worse."
KEEP MIAMI NEW TIMES FREE... Since we started Miami New Times, it has been defined as the free, independent voice of Miami, and we'd like to keep it that way. With local media under siege, it's more important than ever for us to rally support behind funding our local journalism. You can help by participating in our "I Support" program, allowing us to keep offering readers access to our incisive coverage of local news, food and culture with no paywalls.
Make a one-time donation today for as little as $1.