The Progressive Cubanos Behind Cubanos Pa'lante 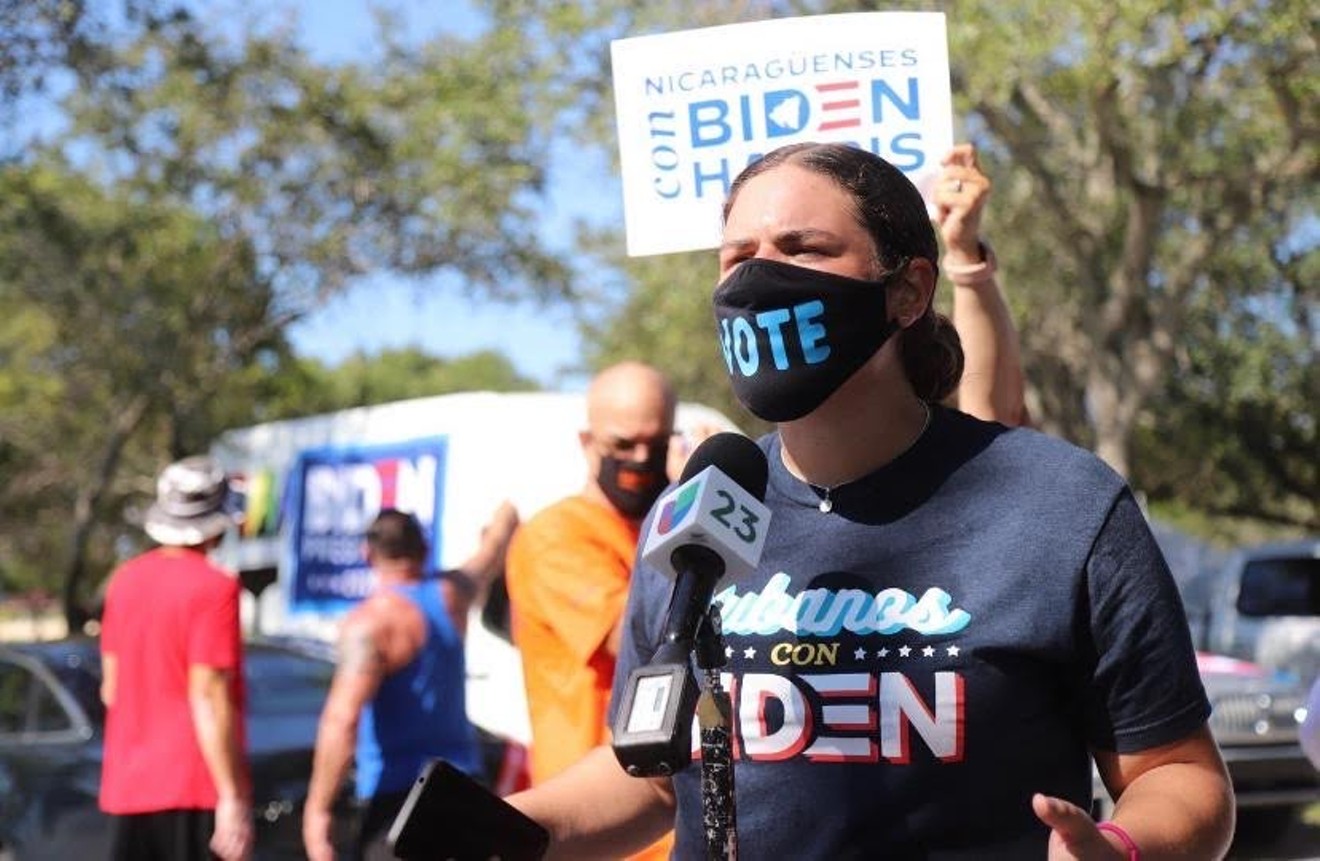 Cubanos Pa'lante cofounder Daniela Ferrera speaks at a Cubanos Con Biden caravan event in 2020. Photo by Cubanos Pa'lante
Cuban flags filled Calle Ocho in July 2021 as Miamians protested in solidarity with those back on the island who were marching over food shortages, blackouts, and lack of access to medicine, among other issues. Amid a sea of Trump hats and conservative political messaging common at Cuban-American protests, Daniela Ferrera stood out. She wore a shirt bearing the logo of Cubanos Pa'lante, a Miami-based group she cofounded to promote progressive ideals and combat political misinformation in the Hispanic community.

Hailing from the Ciego de Ávila province in Cuba, Ferrera and her family arrived on a raft in Miami in 2001, two months before the 9/11 terrorist attacks. After having been raised conservative and supporting Republican politicians, she hit a turning point during the 2016 presidential election season.

"I was seeing the patterns, even as a Republican," Ferrera says of Trump's rise to power. "This was someone who did not respect democracy."

Though she voted for Hillary Clinton, Ferrera did not consider herself a Democrat until she saw Ron DeSantis win the 2018 Florida gubernatorial race. Concerned about the direction of the state and the nation, she sat down with about a dozen other Cubans in the midst of the 2020 presidential primaries and forged a plan to rally local support for then-candidate Joe Biden. On May 20, 2020, the day Cuban exiles celebrate Independence Day, they started a grassroots organization called Cubanos Con Biden.

During the pandemic, knocking on doors was out of the question, so Cubanos Con Biden turned to vehicle caravans — the same kind of street-roving political rallies popular among Trump fans. The Biden caravans prompted strong responses in local communities, ranging from supportive to outright hostile.

Cuban-American Mike Rivero was inspired to contact Ferrera when he spotted one of Cubanos Con Biden's caravans. Rivero, who would become a cofounder of Cubanos Pa'lante, was a seasoned canvasser who had been volunteering for campaigns since Barack Obama's 2012 presidential run. In 2019, not long before he joined Cubanos Con Biden, he was diagnosed with Hodgkin's lymphoma.

Surviving cancer left its mark on Rivero, but what has struck him deeper is the memory of those who were not as fortunate.

"I lived firsthand what it's like to go through a cancer battle, right? You never think you're going to get sick at 30. I saw people next to me who were doing chemo who didn't have insurance, and I saw the gaps in our systems," Rivero says.

Cynthia Perez stood outside a polling location in Miami on a sunny October morning wearing her Cubanos Con Biden T-shirt. As she handed out small pamphlets to passersby, she was approached by a mom with child in tow, both decked out in Trump gear. The mother encouraged the child to confront Perez and he complied with a barrage of obscenities. It was just one of the many instances of casual abuse lobbed at Democrats during the election, but it reminded Perez why she'd signed on.

"I have this strong personality trait where I don't like to see people getting wronged," she tells New Times.

Perez watched Trump and DeSantis rise to prominence before she decided to get politically active on a local level. The final straw came when she saw her family members and fellow churchgoers parroting anti-Semitic talking points linked to the QAnon conspiracy theory. From there, it only took a short message to her friend, Cubanos Con Biden member Amore Rodriguez, to join the group.

The end of the 2020 presidential election brought great news for Cubanos Con Biden: According to Rivero, political strategists informed the group that it had forced Trump's campaign to spend more money and resources in South Florida.

"That means that it opened up opportunities in other places in the country where Democrats can push and states can be won. I never like to quantify results like that, but our work did have an impact," Rivero says.

The end of the campaign also brought conversations about the future. How would Cubanos Con Biden stay afloat after the election? The most immediate problem was the name.

"How can we approach our community and have a conversation about issues, but the moment you say 'Cubanos Con Biden' — the moment you say Biden — we're talking about a Democrat? They think all Democrats are communists," Rivero says.

The new name was an easy pick: "Cubanos Pa'lante," which translates to "Cubans Moving Forward" in English. For each member, this meant something different, but the idea of moving forward from the Cuban community's generational political trauma was shared by all.

As Joe Biden returned to the White House, the members of Cubanos Pa'lante had to figure out how they were going to let the world know the group existed.

"We just wanted to get the community involved so we could give them a space to feel open, and it was a no-judgment zone. They could share their progressive ideals," Perez explains.

Their activities, mostly online, ranged from spotlighting interesting members of the community to organizing small-scale retreats. Then July 11, 2021, came along and shook all of Miami.

Protesters in Cuba engaged with police and marched in demonstrations across the island, demanding improved access to food and COVID-19 vaccines. The protests inspired Miamians to assemble as well and sparked a renewed international conversation about human rights in Cuba. Cubanos Pa'lante decided to fundraise for Cubans, and its newly acquired 6,000 Instagram followers came through with more than the group had expected.

"All of a sudden we raised $40,000 very quickly that we were responsible for distributing in the island — it was a very intense time," Cubanos Pa'lante cofounder Betty Fuentes says.

Donations were used to supply food and medicine to Cuba, yet the tangible items the group sent did little to persuade right-wing Cubans in Miami.

"There was a lot of [Instagram] messages that were like, 'You guys are lying. You guys are stealing. You're a bunch of pendejos.' And just calling us all sorts of things," says Fuentes.

While the group in Miami grappled with its newfound responsibilities, Washington, D.C. resident and Cubanos Pa'lante cofounder Marley Pulido was invited to attend a meeting with the White House Office of Public Engagement. Two weeks later, he met with President Biden.

An Afro-Cuban native of Havana, Pulido settled in Hollywood when he arrived in the U.S. in 2014. After management at the small restaurant where he worked exploited workers' lack of documentation by instituting massive pay cuts, Pulido says, he witnessed the power of political organization. After three days of striking, they got the manager fired and their salaries doubled.

"That was the first time I felt like, 'Oh, yeah, another world is possible if you really, really fight for it,'" Pulido says.

Attending the meeting with the White House Office of Public Engagement, Pulido noticed a stark contrast between the representation of the Cuban community in the room and the footage coming out of the streets on the island. The July 2021 protests in Cuba, Pulido says, brought out scores of Afro-Cuban residents and people "from the poorest and smallest towns." But at the White House, he was the only Afro-Cuban in the room.

"Why are they not represented in this space?" Pulido wondered.

The fight for representation as an Afro-Cuban immigrant was one of the inspirations for Cubanos Pa'lante member Lebert Grinan to ramp up his political activism and join the group.

Just two years after his arrival to the U.S. from Cuba, then-14-year-old Grinan's family moved to Texas. The new environment exposed Grinan to racism and discrimination on a level he'd never experienced. He quickly learned that there were people in his community and school who disliked him simply because of who he was.

"Just the fact that you exist really bothers them," Grinan says of the experience.

In February, the NBC program Meet the Press Reports reached out to Cubanos Pa'lante. The topic of the episode has become a primary focus of the group in recent months: politically driven misinformation.

During the segment, the group highlighted how bogus information propagates through the South Florida Hispanic community on social media posts, with conspiracy theories spreading like wildfire about everything from COVID-19 to Hillary Clinton.

"We are literally living in two different realities," Ferrera summed up on Chuck Todd's show.

Ferrera and Perez say GOP strategists use South Florida as a testing ground for their messaging. This lets Republicans know what social issues can be pushed in other areas of the country, and it contributes to a volatile political environment on a local level.

"I think we were all very angry to see the previous administration and politicians take advantage of the community like that, because the trauma of the people on the island is real," Perez says.

But outreach can't be limited to the Cuban community, according to the group. Cubanos Pa'lante also sees a disconnect with American left-leaning voters. Members have shared stories of being called "gusanos" by American leftists; the term, which literally translates to "worm," is used by the Castro regime to refer to its political enemies.

The lack of dialogue is especially clear in New York City, says Cubanos Pa'lante member Clarisa Alayeto, a local judicial delegate and community organizer. Like other Cubanos Pa'lante members, Alayeto says her political activism is not a conscious decision but was instead embedded in her identity from a young age. While attending college, she wrote for her school's newspaper, where she soon realized all her articles focused on politics.

During the July 2021 protests, Alayeto called her contacts and scheduled a protest in New York City. To her shock, only Cubans with right-wing political leanings showed up.

"I felt bad because I wanted to do this work, but I just could not align with what they stood for," Alayeto says.

Today, Cubanos Pa'lante is focused on the 2022 midterm elections and fostering a politically informed community. The group has resources on its website for cultural education, advocacy, and ways to get involved with Cubanos Pa'lante activities. Group members say they get hate messages, but they also hear from Cubans who are horrified at the direction in which their community has been heading and who want to do something about it.

"We're a couple of regular citizens, coming together with different issues that motivate us. When I look at the impact we've had and the people we have inspired and helped, it goes to show that community organizing, at the end of the day, is one of the most powerful things to bring about change," Rivero says.
KEEP MIAMI NEW TIMES FREE... Since we started Miami New Times, it has been defined as the free, independent voice of Miami, and we'd like to keep it that way. With local media under siege, it's more important than ever for us to rally support behind funding our local journalism. You can help by participating in our "I Support" program, allowing us to keep offering readers access to our incisive coverage of local news, food and culture with no paywalls.
Make a one-time donation today for as little as $1.