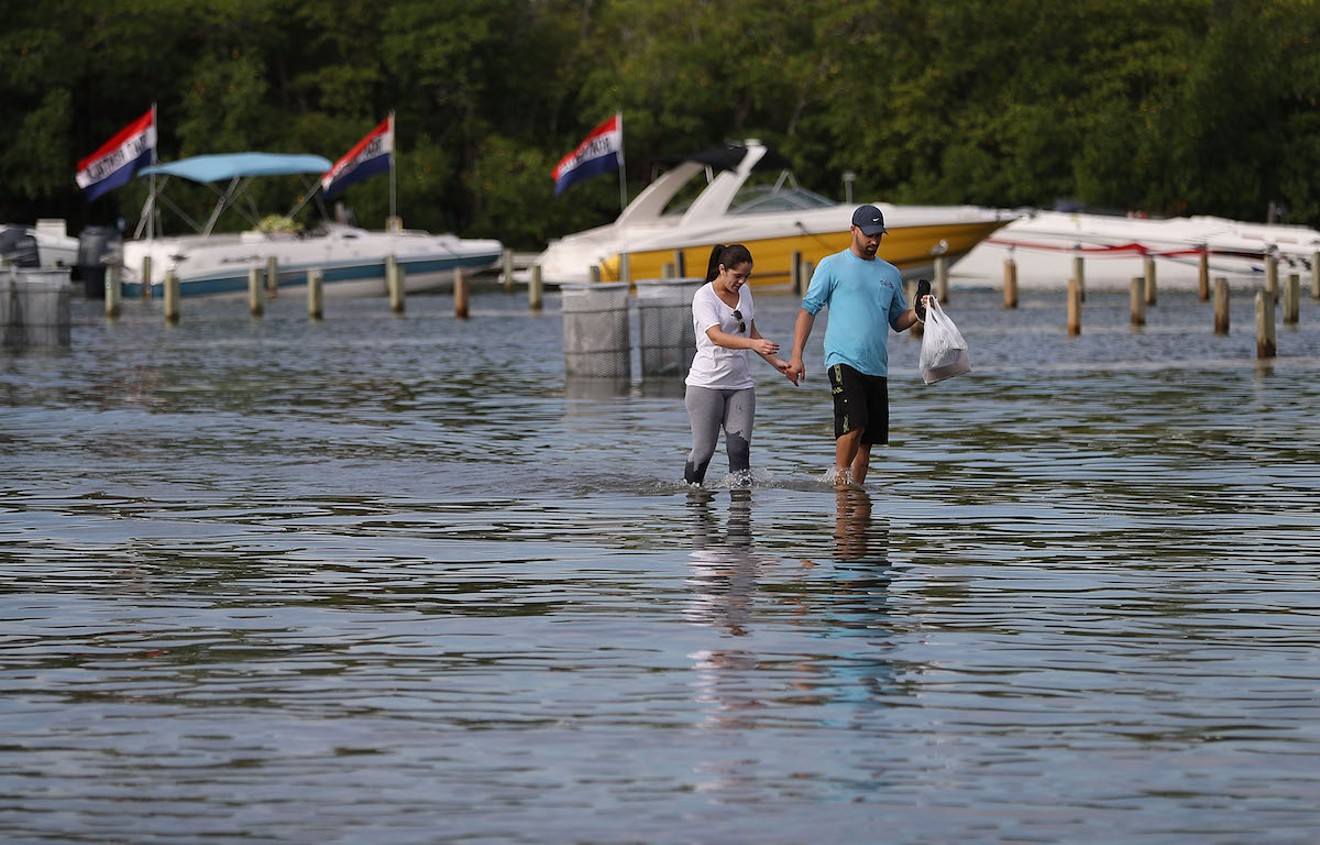 Haulover Marina during a king tide in November 2016. Photo by Joe Raedle/Getty Images
A new report from the Center for Climate Integrity confirms what most of us already know: The seas are rising, and Miami is pretty much screwed.

But the study puts the impact of climate change into stark, almost apocalyptic terms: If Miami-Dade were to construct a basic seawall defense system, the county would need to spend a whopping $3.2 billion for 267 miles of coastal barriers. Constructing 14 miles of seawalls in Miami would cost $173.3 million, or $391 per capita. And Miami Beach faces an estimated price tag of $83 million for nine miles of seawalls, equaling about $900 per person.

Overall, Florida is the most at-risk state for sea-level rise — and the financial consequences of climate adaptation could be staggering for local taxpayers, according to the Center for Climate Integrity.

"We no longer have the luxury of waiting ten years," says Paul Chinowsky, director of the environmental design program at the University of Colorado Boulder and a lead scientist in the study. Coastal defenses would need to begin being built within the next decade to offset the impact of sea-level rise by 2040, Chinowsky said Wednesday during a media teleconference. "The timeline starts now."

The new study analyzed the cost of constructing seawalls along America's coastline to protect public infrastructure from sea-level rise, predicting more than 50,000 miles would be needed in 22 states by 2040. The resulting chain of coastal barriers would be longer than today's interstate highway system and would cost an estimated $400 billion nationwide. Florida could face costs of $76 billion, more than twice the expense of the next most affected state, Louisiana.

And Florida residents stand to bear the largest cost burden for sea-level rise and climate adaptation. Twenty-three counties in the Sunshine State face costs of more than $1 billion for seawall expenses, according to the Center for Climate Integrity. The limestone on which Miami is built makes the city particularly vulnerable to sea-level rise because salt water can seep up through the porous bedrock.

The study comes on the heels of the Trump administration's final repeal of the Obama-era Clean Power Plan, which would have required coal plants to become more efficient by cutting greenhouse gas emissions by 32 percent by 2030, relative to 2005 levels. Instead, it's being replaced by the Affordable Clean Energy rule, which leaves the regulation of power plants to the states. Andrew Wheeler, current administrator of the Environmental Protection Agency and a former lobbyist for a major Ohio coal magnate, signed the new rule into law yesterday. A multistate coalition has already announced plans to file a lawsuit.

The sea is already surging in South Florida. Global sea level increased by six to eight inches over the past century, and that number is expected to accelerate as mountain glaciers and polar ice caps continue to melt due to climate change. The Southeast Florida Regional Climate Change Compact projects the sea could rise another six to 12 inches by 2030 and 14 to 34 inches by 2060. By the end of the century, entire communities could be swallowed.

"We should be preparing for six feet or more," says Sverre Leroy, a climate scientist and lead analyst for the Center for Climate Integrity.

Kelly Cox, general counsel for the nonprofit Miami Waterkeeper, says the local implications are far broader than tidal flooding. The septic system in Miami is particularly vulnerable, she says, because it was not built to accommodate current population levels or the increased flow of wastewater. Another concern is inland pollutants, such as oil and fertilizer, being washed into the bay due to sea-level rise.

"Clean water is what makes Miami Miami," Cox says. "We are all intimately connected to it, from tourism and outdoor recreation to property values and the economy. It's part of the cultural heritage of this community and a massive economic driver."

Despite the Center for Climate Integrity's focus on seawalls, Kathleen Sealey, a marine biologist and conservationist at the University of Miami, says flood prevention is an overly simplistic approach to climate change.

"People think it's as simple as a flooding event, but there are much broader implications," she says. "It's all related to algal blooms, high temperatures, and fish kills. It's pervasive through our whole quality of life in South Florida."

Sealey, the author of Will Miami Survive?, a 2018 book outlining the ecological impacts of climate change, believes residents ultimately might need to decide between rebuilding or relocating.

"Everybody needs an exit plan from Miami," she says.
KEEP MIAMI NEW TIMES FREE... Since we started Miami New Times, it has been defined as the free, independent voice of Miami, and we'd like to keep it that way. With local media under siege, it's more important than ever for us to rally support behind funding our local journalism. You can help by participating in our "I Support" program, allowing us to keep offering readers access to our incisive coverage of local news, food and culture with no paywalls.
Make a one-time donation today for as little as $1.