Extreme Heat in Miami Will Only Get Worse, Scientists Warn UPDATED Miami's future could be even hotter than state averages. Photo by joiseyshowaa / Flickr
Dr. Cheryl Holder was volunteering at the Overtown Music & Arts Festival this past weekend when an 11-year-old girl became extremely ill. The temperature was in the low 90s, but the heat index level — a combination of heat and humidity that more accurately explains what the temperature feels like — was closer to triple digits. Noticing the girl was displaying early stages of heat exhaustion, Holder provided water and cooled the child down with a cold compress until emergency medical technicians arrived.

Miami has broken heat records left and right this summer, but scientists say this is just the beginning. A study published this morning by the Union of Concerned Scientists reveals an extremely hot future for the Southeast United States.

"If we don't take drastic action to reduce carbon emissions, then most people in the United States will be experiencing a lot more killer heat days," says Juan Declet-Barreto, a climate scientist for the Union of Concerned Scientists and one of the report's authors. "We're putting millions of people in danger."

Florida averages 125 days per year with a heat index above 90 degrees Fahrenheit — the point at which outdoor workers can easily fall ill. Assuming no global action to reduce carbon emissions occurs, Florida can expect 166 "extreme caution" heat days by midcentury and 186 days by 2100. Florida has historically had about three weeks every year where the heat index tops 100 degrees, but Floridians can expect more than three months of temperatures in the triple digits by midcentury. Currently, four days on average have a heat index above 105 degrees, classified as dangerous by the National Weather Service, but that number is predicted to skyrocket to 63 days per year by midcentury and 111 by the century's end.

Limiting warming to 2 degrees Celsius (35.6 degrees Fahrenheit) above pre-industrial levels — the goal set by the Paris Climate Agreement — would minimize the frequency of extreme heat days in South Florida. Days above a heat index of 105 degrees Fahrenheit could be capped at 41 days per year.

"The more rapid reductions in carbon emissions we take today, the higher the possibility we can avoid the worst-case scenario of climate change," Declet-Barreto says. 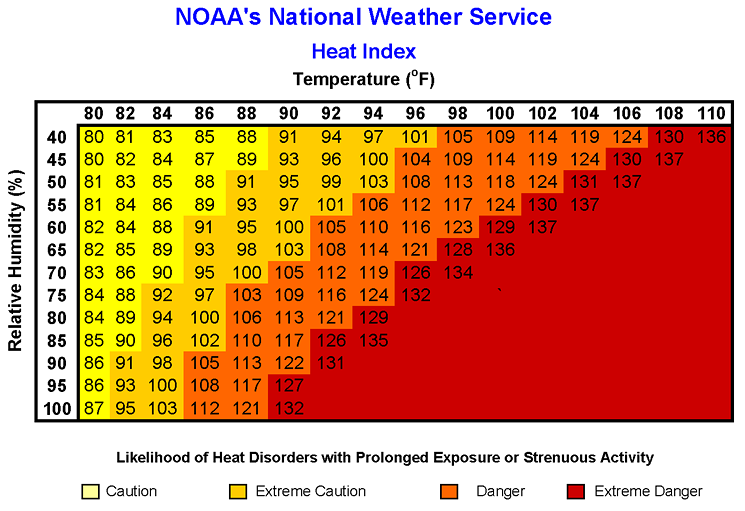 Image via weather.gov
The National Weather Service offers no calculation for a heat index above 137 degrees Fahrenheit. Such extreme temperatures are reserved for places such as Death Valley in California, where very few people live due to what the government agency calls "extreme danger" heat. Fewer than 2,000 people nationwide have experienced heat above 137 degrees, but by the end of the century, 13 million will have experienced those conditions. Florida currently averages zero off-the-chart heat days in any given year, but Floridians can expect two weeks a year to be 137 degrees or hotter if the current rate of warming and emissions continues.

Holder, a physician in Little Haiti and the co-chair of Florida Clinicians for Climate Action, says Miamians are already feeling the health consequences of climate change. Extreme heat waves are the number one climate killer in the world, exacerbating issues with the cardiovascular system and causing health complications such as chronic obstructive pulmonary disease (COPD) and asthma. Dehydration is another major concern, particularly in children because they lose sweat much faster and are more susceptible to overheating. Those who work outside all day, such as in the construction and agricultural industries, will need access to water and cool-down stations to reduce their body temperature. Society's most vulnerable populations — children, the elderly, and the poor — will be most adversely affected by heat waves.

(UPDATE: According to the Union of Concerned Scientists, Miami averaged 16 days per year with a heat index at or above 100 degrees Fahrenheit from 1971 to 2000, The city can expect that number to multiply by seven times to 114 days by the middle of the century and by nearly ten times to 153 days per year by the end of the century. Days with a heat index level of 105 degrees will grow from an average of one per year to 59 by mid-century and 119 by 2100. Sunstroke, heat cramps, and heat exhaustion are likely health consequences at such extreme temperatures, according to the National Weather Service, and heat stroke is possible with prolonged exposure or physical activity.)

Metropolitan construction materials such as cement, glass, and steel store heat faster than they release it, so urban areas often have higher temperatures than surrounding rural areas with more trees and land cover.

"Florida is ground zero for the impacts of climate change," Declet-Barreto says. "Floridians know climate change is happening because they are living it."
KEEP MIAMI NEW TIMES FREE... Since we started Miami New Times, it has been defined as the free, independent voice of Miami, and we'd like to keep it that way. With local media under siege, it's more important than ever for us to rally support behind funding our local journalism. You can help by participating in our "I Support" program, allowing us to keep offering readers access to our incisive coverage of local news, food and culture with no paywalls.
Make a one-time donation today for as little as $1.