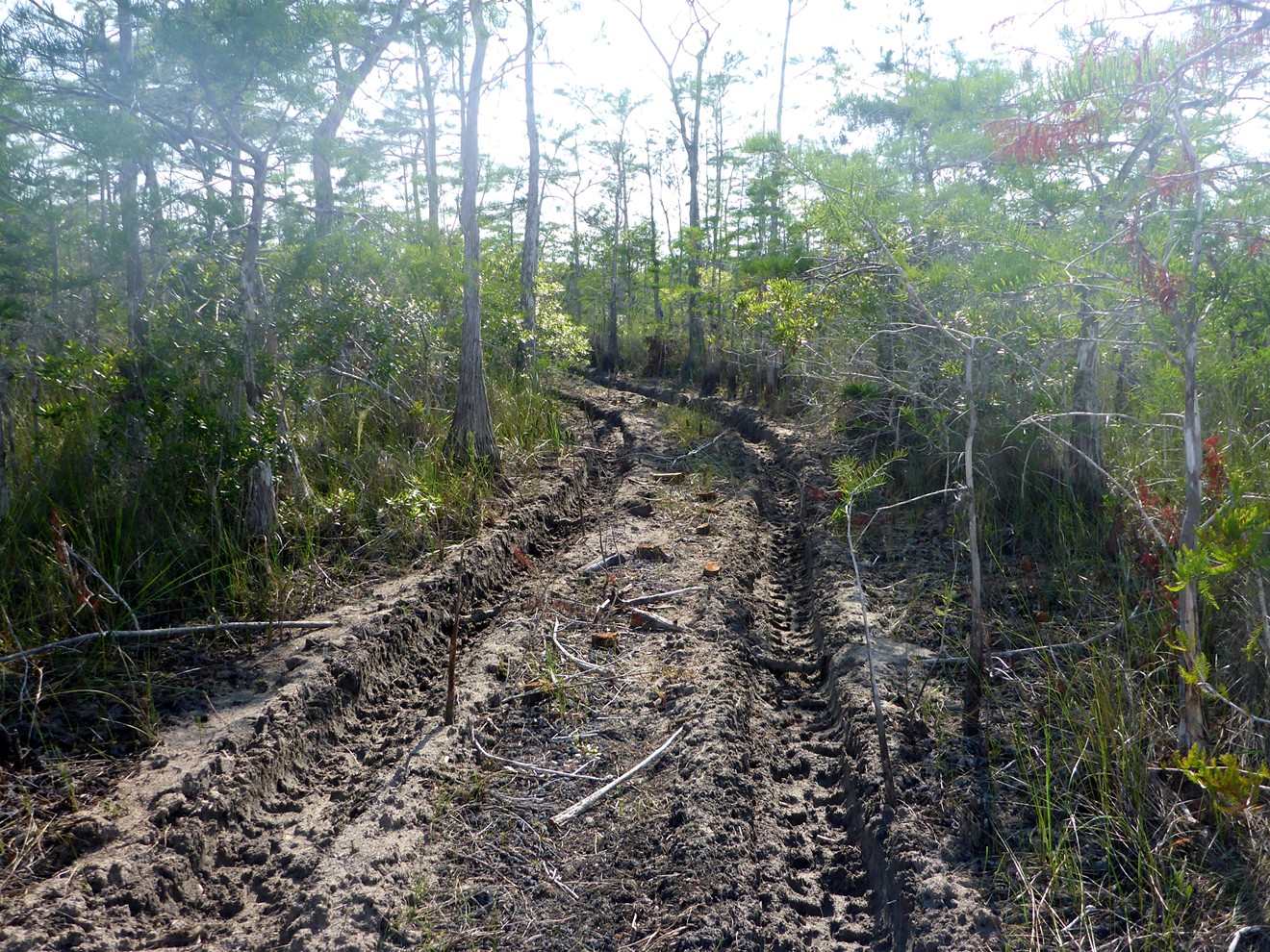 Schwartz says the compacted soil where Burnett used its vibroseis trucks feels like rubber mulch. Photo by Matthew Schwartz
West of Miami is Big Cypress National Preserve, an expanse of prairie, bog, and hardwood forest that includes dwarf cypress trees. These rarely grow taller than 15 feet. They provide roosting sites for bluebirds, food for the cypress fox squirrel, and scratching posts for the Florida panther and black bear.

But two miles beneath these trees is the Sunniland Trend, a small stash of oil shale that runs diagonally from Fort Myers to Miami and is owned by the descendants of South Florida pioneer Barron Collier. In 2015, the Texas-based Burnett Oil Co. obtained permission from the family to send 33-ton vibroseis trucks into 230,000 acres of the preserve. The plan was for them to crisscross the soft soil, pounding vibrations deep into the ground in search of the shale's exact location.

“I was standing 100 feet away, and it sounded like a jet plane landing,” says Amber Crooks, the policy manager for the Conservancy of Southwest Florida, an organization that's monitoring Burnett’s progress in the preserve. “You could feel the vibrations the trucks were making even from far away.”

The company began its search for oil in 2017 but was forced to stop because of heavy rain. A year later, activists say damage to the preserve is apparent.

Video footage, obtained by the Natural Resources Defense Council (NRDC) through a Freedom of Information Act request, shows the trucks rolling through a dense cypress prairie, which includes fragile, spongy soil. Trees are felled left and right. It looks like an arcade game where the goal is to knock out as many trees as possible.

“What you’re seeing in those videos is Burnett doing something they’re not supposed to be doing,” says Matthew Schwartz, the executive director of the South Florida Wildlands Association (SFWA), who takes regular trips to the preserve to document the oil exploration. “They’re supposed to stay out of areas they know will be easily damaged.”
Left in the truck's wake are gouges in the soil nearly two feet deep in some parts. According to Schwartz, the soil in Big Cypress feels like rubber mulch. “When the soil is wet, you can dig it with a plastic spoon,” he says. “When you drive over it, you’re destroying the soil, and there’s nothing to bring it back. Burnett said they will use rakes to fluff it up, but it’s not going to be the same.”

In 2016, the Conservancy of Southwest Florida, the SFWA, the NRDC, and other organizations filed a lawsuit to stop Burnett’s oil exploration. They alleged the federal review of the company’s proposed plans, which claimed the trucks would cause “minimal impact” to the preserve, was not thorough enough. “This is what we had feared was going to take place,” Crook says. “The deep, deep rutting in the soil and the mowing-down on the ancient cypress trees.”

Though a judge ruled against them, Crook says the coalition successfully lobbied for stronger regulations in Burnett’s state-issued permits. Burnett is now required to restore the preserve while it does the seismic exploration. Ideally, concurrent restoration would prevent the compacted soil from disrupting the water flow in the preserve and fostering nonnative vegetation. Schwartz says the compacted soil where Burnett used its vibroseis trucks feels like rubber mulch.
Photo by Matthew Schwartz
But Alison Kelly, an attorney for the NRDC, says there’s no evidence Burnett has restored the land and that the stronger permits are not being enforced. She’s concerned that with the beginning of the rainy season, Burnett will claim it’s too wet to return to the preserve. “We’re not just gonna sit back and let them decide when they’re gonna restore, how to restore,” Kelly says. “We want to hold them to the same standard any violator would be held to.”

Kelly is also waiting to review Burnett’s restoration plans. She’s unsure if the damage can even be fixed. “This is the first large-scale seismic exploration of its type and size in the state of Florida,” she says. “This is basically an experiment.”

When the Everglades was established as a national park in 1947, Big Cypress was intended to be included. But the federal government couldn’t purchase the rights to the minerals underneath the land. Today, two oil reserves already operate on Big Cypress, which Kelly notes, provides nearly half of the Everglades’ freshwater.

“If we turn Big Cypress into a large-scale oil-production facility, we’re going to industrialize the Everglades,” Kelly says. “With all the billions of dollars being spent on Everglades restoration, this is not compatible for the Everglades and should be stopped.”
KEEP MIAMI NEW TIMES FREE... Since we started Miami New Times, it has been defined as the free, independent voice of Miami, and we'd like to keep it that way. With local media under siege, it's more important than ever for us to rally support behind funding our local journalism. You can help by participating in our "I Support" program, allowing us to keep offering readers access to our incisive coverage of local news, food and culture with no paywalls.
Make a one-time donation today for as little as $1.