Two Burger King Customers Were Called a Gay Slur, Then Pepper-Sprayed. Was It a Hate Crime? 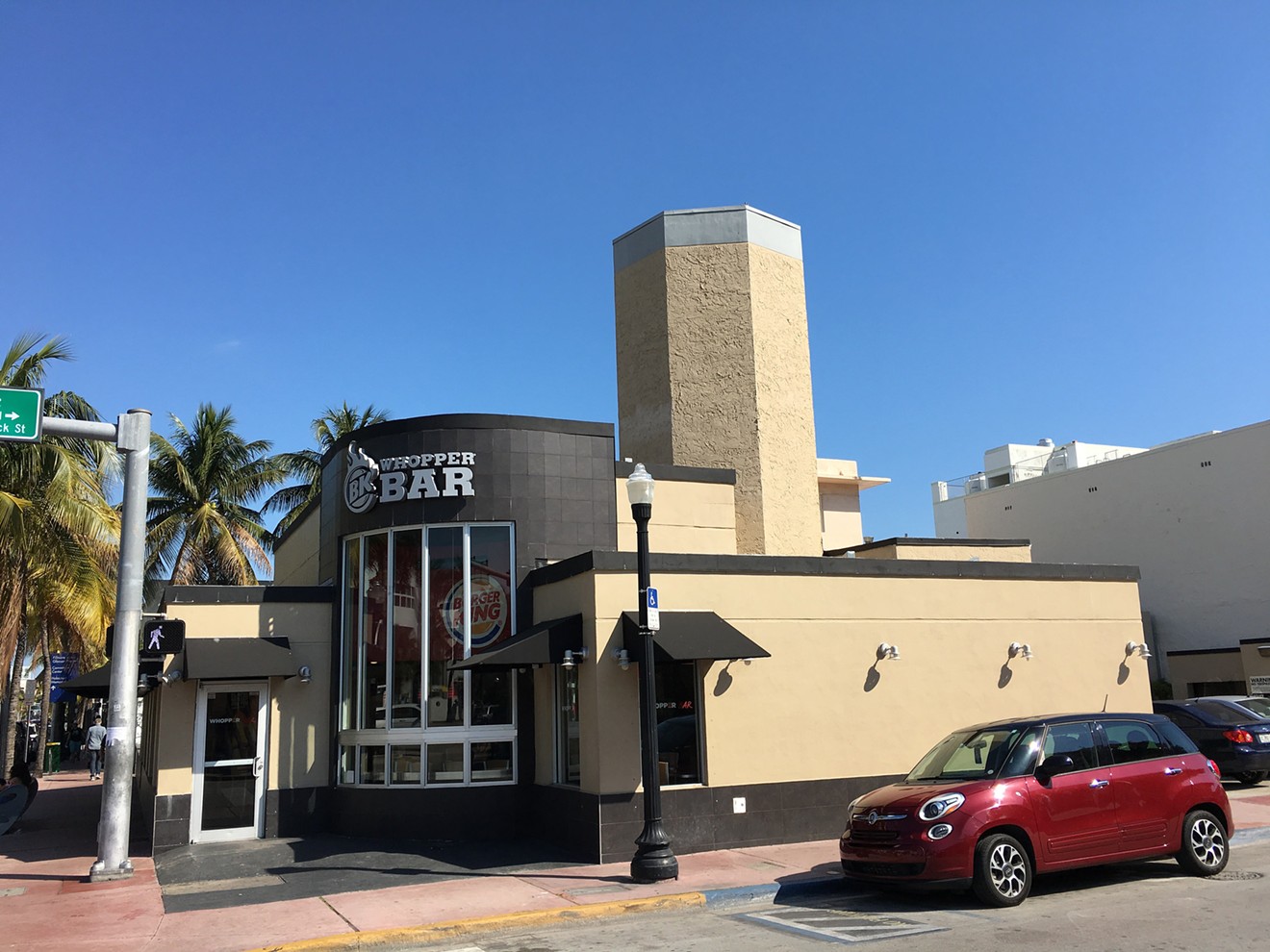 The Burger King Whopper Bar in South Beach photo by Phillip Pessar via FlickrCC
More than two years after a gay man and a transgender woman were insulted by a South Beach Burger King employee who used a gay slur and then pepper-sprayed by a security guard, lawyers for the two customers are still arguing with attorneys for the fast-food chain about a crucial element of what happened that night — whether the incident qualifies as a hate crime.

On October 13, 2018, Raymond Ortega and Toni Llerena say, an employee at the BK Whopper Bar called them "fucking faggots" after a short dispute about the seats they'd taken in a section that was being closed for cleaning. Ortega alleges that when he complained to a security guard — asking him how he would feel if the slur was directed at his son — the guard grew enraged and deployed his pepper spray, macing both Ortega and Llerena. The security guard then tussled with Ortega both inside and outside the restaurant, leaving him with a fractured jaw, a busted ear, and about $14,000 in medical bills, Ortega later testified. The two friends filed a lawsuit in February of 2019, alleging multiple counts of negligence by Burger King and battery by the contracted security guard.

At a virtual court hearing yesterday, an attorney for Burger King denied that the incident was a hate crime, as lawyers for Ortega and Llerena have contended.

"Counsel has made this an issue of a hate crime. This was unequivocally not a hate crime," Burger King attorney Suzanne Singer told Miami-Dade Circuit Judge Samantha Ruiz Cohen.

According to sworn depositions taken as part of the lawsuit, Ortega and Llerena say they left the gay nightclub Twist that night and went to order food at the nearby BK Whopper Bar.

But a few minutes after they sat down with their food, a female employee told them they couldn't sit there and needed to leave. The demand confused Llerena and annoyed Ortega, who noted that no one else in the section had been asked to leave and asked if they could take a few minutes to finish their food. The employee wouldn't budge; eventually, Ortega and Llerena say, they got up to move outside.

As they were walking out, the employee muttered the phrase "fucking faggots," according to depositions later given by Ortega, Llerena, and the security guard.

Ortega says he wanted an apology and pleaded with the security guard to make the employee oblige. According to Ortega and Llerena, the security guard then repeated the employee's words: "Just leave, you fucking faggots." That's when Ortega made his final appeal, asking the guard something along the lines of How would you like it if this was your son?

The security guard, who is not a named defendant in the lawsuit, gave slightly different testimony. Although he confirmed in a deposition that he heard the employee call Ortega and Llerena "fucking faggots," he says Ortega also used derogatory terms toward the employee and him, calling them a "Black bitch" and a "low life," respectively. The guard also says Ortega disparaged the employee, mocking her low hourly wage. (Ortega disputed that characterization in his own deposition; he denied insulting the employee and the guard, saying he, too, is a service worker who makes $5 an hour.) 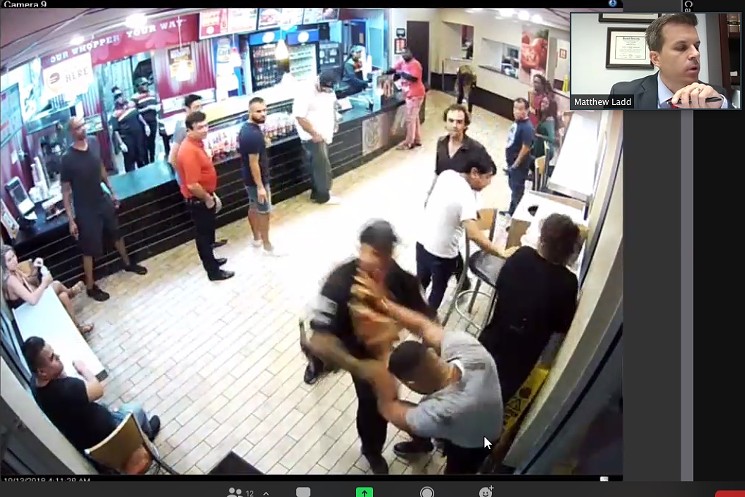 Security footage showing the guard tussling with Raymond Ortega was broadcast during the Zoom court hearing.
Screenshot via Zoom
Singer, the attorney for Burger King, said in yesterday's court hearing that there were "derogatory exchanges both ways" but claimed Ortega had been the aggressor.

"It was inappropriate on both sides, but this was also not a hate crime," she said. "...This was an unfortunate incident. It was one that was brought on by Mr. Ortega."

The guard alleged in his deposition that Ortega at one point hit him in the face with a cup — something Ortega disputes — and said he feared for his life during the short confrontation. Asked directly if he was homophobic or harbored hatred toward gay or transgender people, the guard said, "I treat people with respect and people are people, doesn't matter color, race, religion, or sex preference."

But Matthew Ladd, a lawyer representing Ortega and Llerena, tells New Times he has no doubt the incident was motivated by LGBTQ discrimination. He says the Burger King employee using the gay slur and the security guard snapping at the theoretical suggestion of his son being gay demonstrates that. Furthermore, Ladd contends, the guard's use of force was unnecessary, making it a hate-motivated battery.

The purpose of yesterday's court hearing was to determine whether the allegations of negligence against Burger King should be dismissed as they pertain to Llerena. Burger King's lawyers cited Florida's so-called impact law that limits legal action from people who aren't physically injured in an incident, noting that Llerena herself said she wasn't physically touched or injured at the Burger King. But Ladd argued that the pepper spray physically entered Llerena's body and caused her to have a physical reaction of temporary blindness and a stinging pain to her face. Judge Samantha Ruiz Cohen sided with Llerena's lawyer, meaning Burger King will have to continue defending itself against the claims of negligence.

When Llerena was asked in her deposition what kind of compensation she was looking for, she said she wanted to protect other customers from having the kind of night she'd had on October 13, 2018.

"I just honestly, I just don't want situations like this to keep happening to anybody — LGBT, non-LGBT, to anybody," she said, "and it's — I just don't want it to happen to me again or anybody else, really."
KEEP MIAMI NEW TIMES FREE... Since we started Miami New Times, it has been defined as the free, independent voice of Miami, and we'd like to keep it that way. With local media under siege, it's more important than ever for us to rally support behind funding our local journalism. You can help by participating in our "I Support" program, allowing us to keep offering readers access to our incisive coverage of local news, food and culture with no paywalls.
Make a one-time donation today for as little as $1.