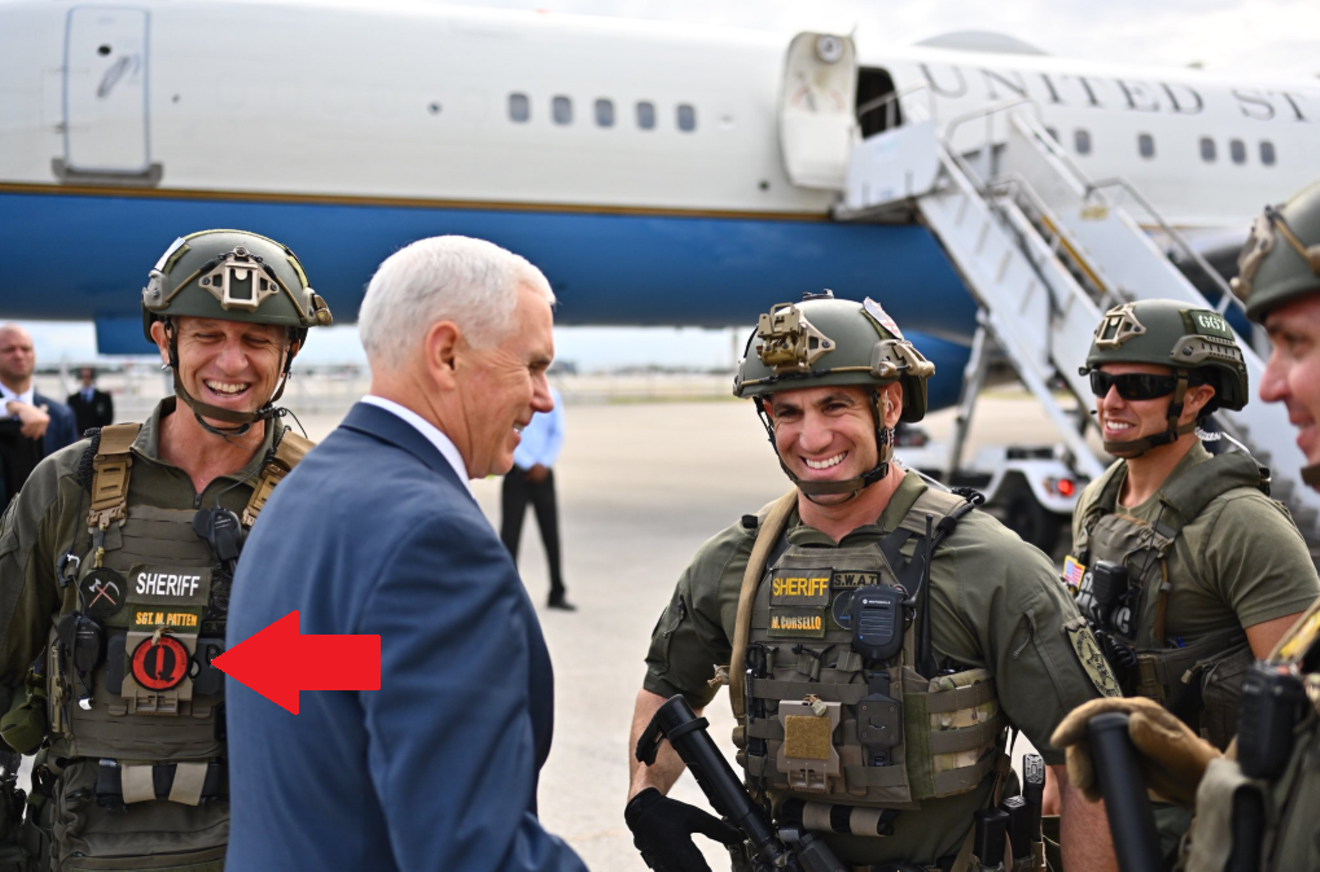 For the uninitiated, QAnon is the staggeringly dumb internet conspiracy theory that claims Donald Trump is secretly working to arrest a coterie of high-level pedophiles in Hollywood and the Democratic Party. In reality, NBC News has proffered convincing evidence that the people behind the conspiracy theory are actually a group of online con artists on YouTube and 4chan.

So it's troubling that a high-level cop with a gun, the power to arrest people, and authority over Homeland Security and anti-terror-related cases would be dumb enough to believe in the conspiracy theory. RightWingWatch reporter Jared Holt was the first person to catch that Pence tweeted out the image with Patten. After New Times and other news outlets began asking BSO about the cop, Pence even deleted the tweet that included his photo with Patten.

Today, Mike Pence posted a photo on Twitter with a Flordia law enforcement officer wearing a QAnon patch for sale on Amazon pic.twitter.com/vnOkk1l5Ee


BSO on Friday said Patten's "Question the Narrative" patch was not authorized by the department. Today the office issued Patten a written reprimand, stating the conspiracy theory was "controversial" and made BSO seem "biased" politically. BSO also claimed the incident embarrassed the department and brought negative news coverage in many national and international outlets, including the Washington Post and CNN. BSO is struggling to rehabilitate its image after multiple missteps during the Parkland massacre; this controversy does not help matters.

"This resulted in negative ramifications on a national platform as a controversy for the Broward Sheriff's Office, the County, the SWAT team, and Sergeant Patten," a copy of the reprimand says. "The controversy also caused the V.P.O.T.U.S. Office Website to delete the image."
KEEP MIAMI NEW TIMES FREE... Since we started Miami New Times, it has been defined as the free, independent voice of Miami, and we'd like to keep it that way. With local media under siege, it's more important than ever for us to rally support behind funding our local journalism. You can help by participating in our "I Support" program, allowing us to keep offering readers access to our incisive coverage of local news, food and culture with no paywalls.
Make a one-time donation today for as little as $1.