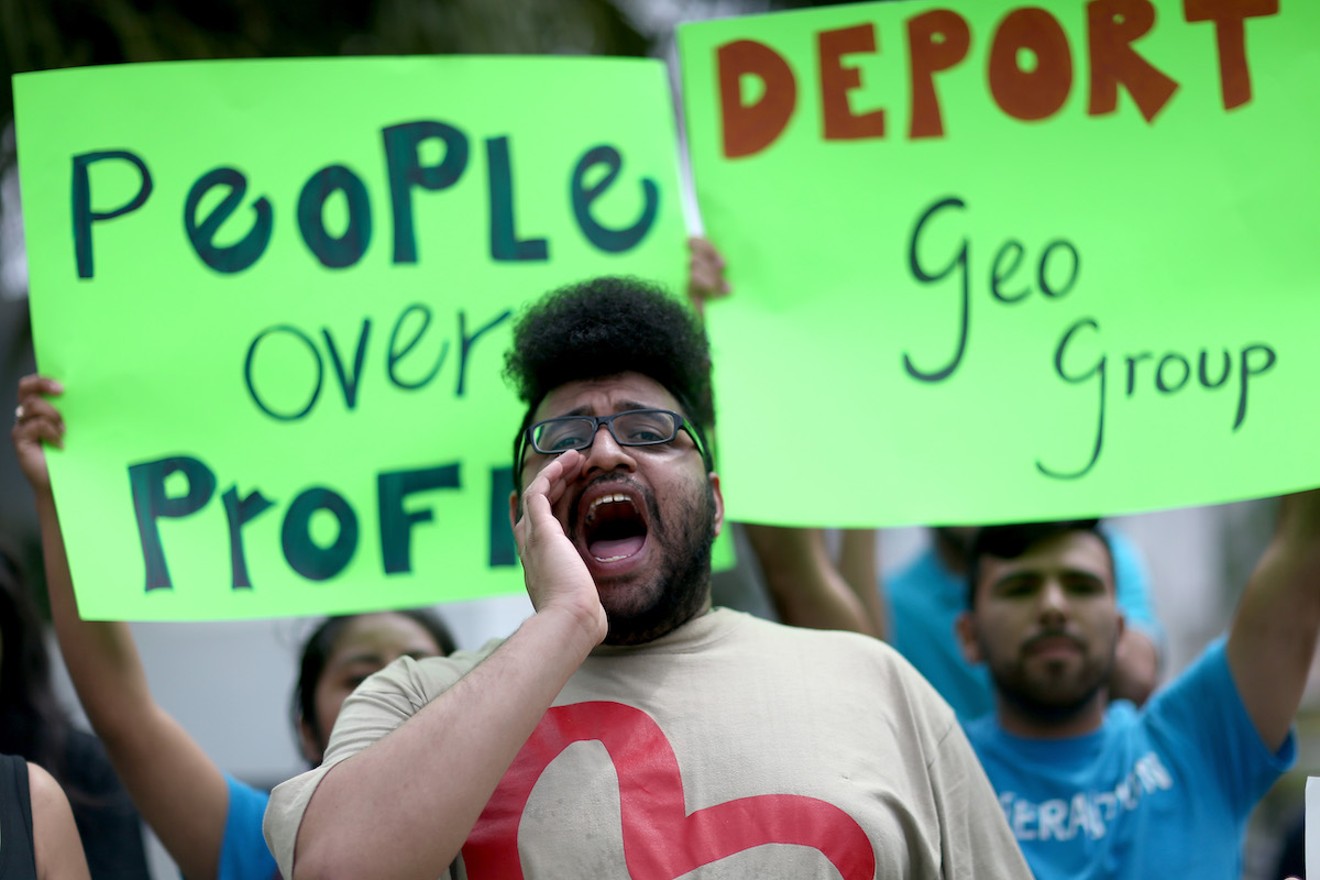 Activists protesting in front of GEO Group's headquarters in Boca Raton. Photo by Joe Raedle / Getty Images
The Trump era has been a gold rush for those in the business of locking up immigrants, none more so than the Boca Raton-based GEO Group. Boasting almost $500 million in contracts with Immigration and Customs Enforcement, the private-prison firm has made a pretty penny from the new war on immigrants while avoiding paying almost any corporate taxes on profits thanks to a special carve-out in the federal tax code.

But now a bill introduced by the ranking Democrat on the U.S. Senate Committee on Finance could strip away that special tax-privileged status. The bill's author, Sen. Ron Wyden of Oregon, says it's time private-prison firms start paying taxes like any other corporate entity.

"Private prisons make our communities less safe by focusing on shareholder profits and doing nothing for rehabilitating people to become productive citizens after they have served their sentence," Wyden said in a statement. "The twisted result of this bizarre loophole is to fatten the profits of companies getting rich off mostly poor people, worsening an already broken criminal justice system."

The "loophole" pertains to corporations that qualify as real-estate investment trusts (REIT). Such a classification allows corporate entities to skip out on paying taxes on nearly all of their profits from property-related operations as long as they're paid out to shareholders as dividends. Without this status, private-prison firms would be taxed as most corporations are taxed — once at the corporate level and again at the shareholder level.


Thanks to Trump’s inhumane immigration policies, our country’s private prison industry is booming.

But companies throwing children in cages shouldn’t be getting tax breaks, so I introduced legislation to do away with tax benefits for companies profiting off of these atrocities.

Congressional Democrats and state Democratic lawmakers have grown skeptical of private prisons over recent years, even more so following the public backlash to the Trump administration’s cruel policy of forcibly separating migrant families at the border. Last year, the Florida Democratic Party pledged to stop taking campaign contributions from prison contractors after being pressured by local activists (though it is still accepting money indirectly through political action committees).

A spokesperson for GEO Group, which operates more than 140 detention centers nationwide and is the nation's largest ICE contractor, slammed Wyden's bill and said prison contractors are not the problem.

In other words, GEO says it doesn't make or shape the nation's immigration laws — it simply profits from them. But that's not actually true: GEO Group began asserting its influence on immigration policy in 2013, when it turned to the lobbying firm Navigators Global to reach out to Congress on "issues related to comprehensive immigration reform." In 2017 and 2018, GEO spent more than $3 million on lobbying, including $150,000 to the lobbying firm Ballard Partners for work influencing "labor policy" and "immigration regulation." Brian Ballard, the firm's president and namesake, is a top Florida lobbyist who worked as Trump’s finance chairman in the state during the 2016 presidential campaign.

And though GEO Group maintains it does not advocate for specific policy positions, the lawmakers it funds certainly do. Over the past 20 years, GEO has given nearly $7 million in political donations, with most going to Republican candidates, including Florida immigration and detention hawks such as state Rep. Matt Gaetz and U.S. Sen. Rick Scott. In Florida's most recent gubernatorial election, GEO Group also made a $100,000 contribution to a PAC associated with Gov. Ron DeSantis. (DeSantis' Democratic opponent for governor, Andrew Gillum, had publicly stated private prisons should be illegal in Florida.)

Senator Wyden's bill, which stands little to no chance of making it out of committee, is a companion to legislation put forth in the House by Rep. Gregory W. Meeks of New York.
KEEP MIAMI NEW TIMES FREE... Since we started Miami New Times, it has been defined as the free, independent voice of Miami, and we'd like to keep it that way. With local media under siege, it's more important than ever for us to rally support behind funding our local journalism. You can help by participating in our "I Support" program, allowing us to keep offering readers access to our incisive coverage of local news, food and culture with no paywalls.
Make a one-time donation today for as little as $1.