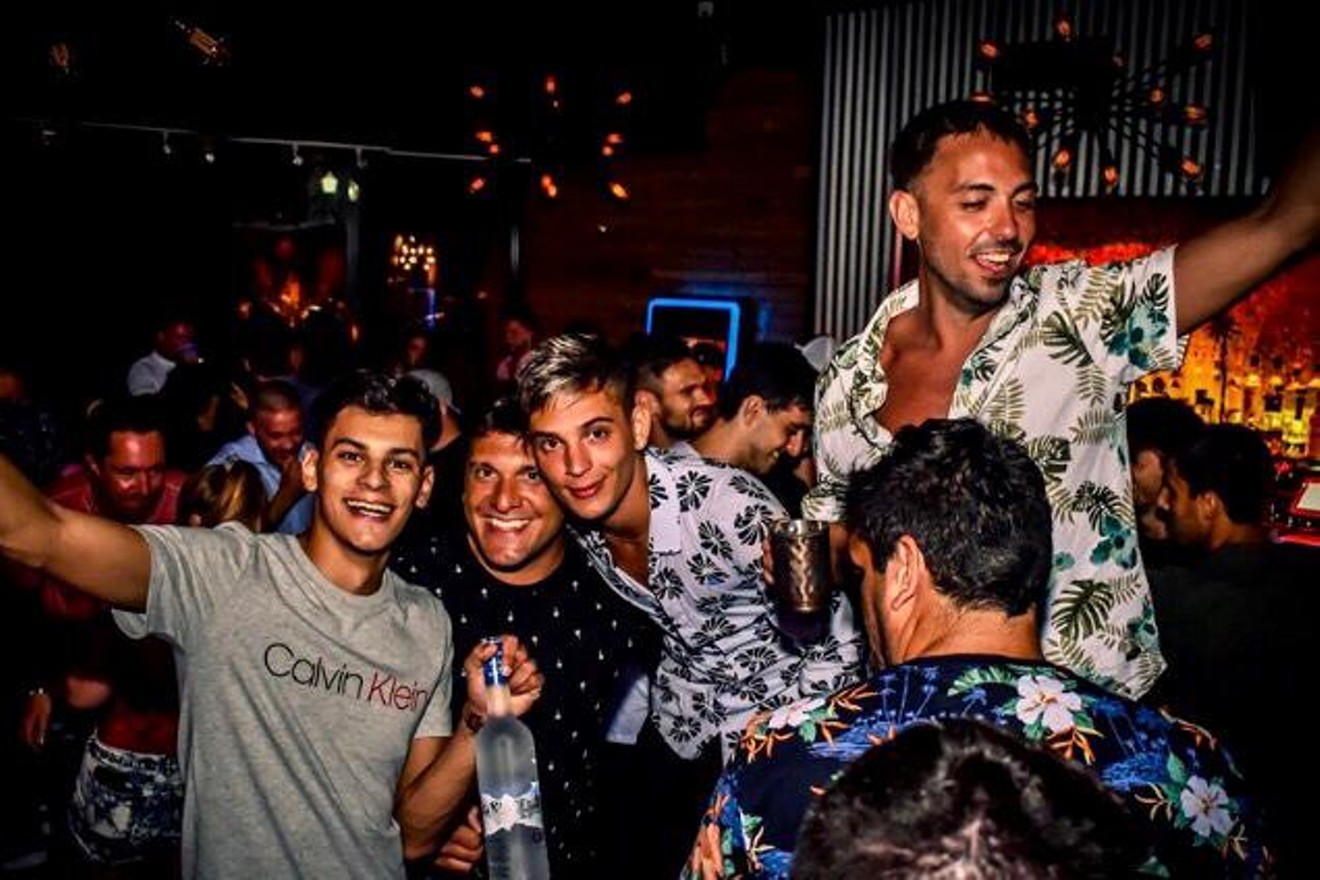 WaterLoo is an inclusive space meant for locals. Photo by Santiago Ibanez
Nightlife in Miami can be tough when it seems like all clubs, bars, and venues only want to make a buck off you. Ahmed Labib and Tony Ferro, business partners and co-owners, decided to open WaterLoo with the goal of offering an inclusive space that's also genuine — reasonably priced drinks, good customer service, and a space meant for locals while keeping a sexy and laid-back aesthetic.

WaterLoo's owners prefer to call their venue a drinking room or discotheque rather than a club or bar. "It's a lounge where people dance... Our music isn't extremely loud where you can't even hear the other person," Ferro says.

The space is nestled at the intersection of Washington Avenue and 12th Street in South Beach, close to fellow gay bar Twist and next to the National LGBTQ Task Force's South Florida headquarters. "We're trying to create a gayborhood," Ferro says.

WaterLoo opened in February, recent enough that Labib and Ferro are still deciding what programming and events work best. So far, they say, they're proud to have received great reviews and feedback from their customers. "We've gotten compliments on something as simple as cleanliness and how approachable our staff is," Labib says.

Mondays at WaterLoo are meant for locals — the venue offers a rare $3 special on well drinks. Tuesdays feature karaoke with popular drag queen Tiffany Fantasia. The rest of the week, visitors will find a variety of dance and electronic DJs on the decks.

"People can let loose, let their hair down, and have a good time," Labib says. The easygoing and diverse atmosphere leaves the space open to all kinds of people, whether they're coming in to enjoy an after-work happy hour or a Saturday-night rager. Labib and Ferro believe their openness to the community has welcomed a straight crowd too. "Even though the gay flag is proudly displayed outside, [straight customers] feel comfortable enough to walk in because we're giving them customer service they don't get anywhere else on the Beach."

The two business partners' background and experience have an apparent influence on their community-focused philosophy. Labib, age 33, has an extensive history of managing restaurants and clubs globally, and most recently, he was general manager at Palace for a brief six months. "Throughout my many trials and tribulations, I found that they were focused on the tourists... I wanted to bring the community together as opposed to being divisive," he says.

Ferro has been part of the Miami gay scene since the early '90s. After seeing a decline in the scene, he launched the Penny Back Boyz parties in a nod to old-school South Beach parties. The name originated from house parties with the idea to give a penny back at the door for a free drink. Because of their popularity, the parties eventually moved to a weekly Wednesday slot at Ink Nightclub and spread to other venues. Ferro continued to host and produce events throughout Miami but now has taken his party-planning expertise to WaterLoo.

After deciding to use his talents for his own concept, Labib joined Ferro to open a spot where they could make their own decisions on how to cater to the community.

To avoid the fate of many gay bars and clubs that have come and gone, the two plan to continue to concentrate on customer service so locals keep coming back. "We want to focus on the locals. Miami Beach caters predominantly towards tourists with inflated prices and service charges... but we want to be competitive in our pricing while offering a quality and comfortable space," Labib says. "We're seeing what the community wants from us."

WaterLoo Miami. 1216 Washington Ave., Miami Beach; 305-600-9494; facebook.com/waterloomiami.
KEEP MIAMI NEW TIMES FREE... Since we started Miami New Times, it has been defined as the free, independent voice of Miami, and we'd like to keep it that way. With local media under siege, it's more important than ever for us to rally support behind funding our local journalism. You can help by participating in our "I Support" program, allowing us to keep offering readers access to our incisive coverage of local news, food and culture with no paywalls.
Make a one-time donation today for as little as $1.