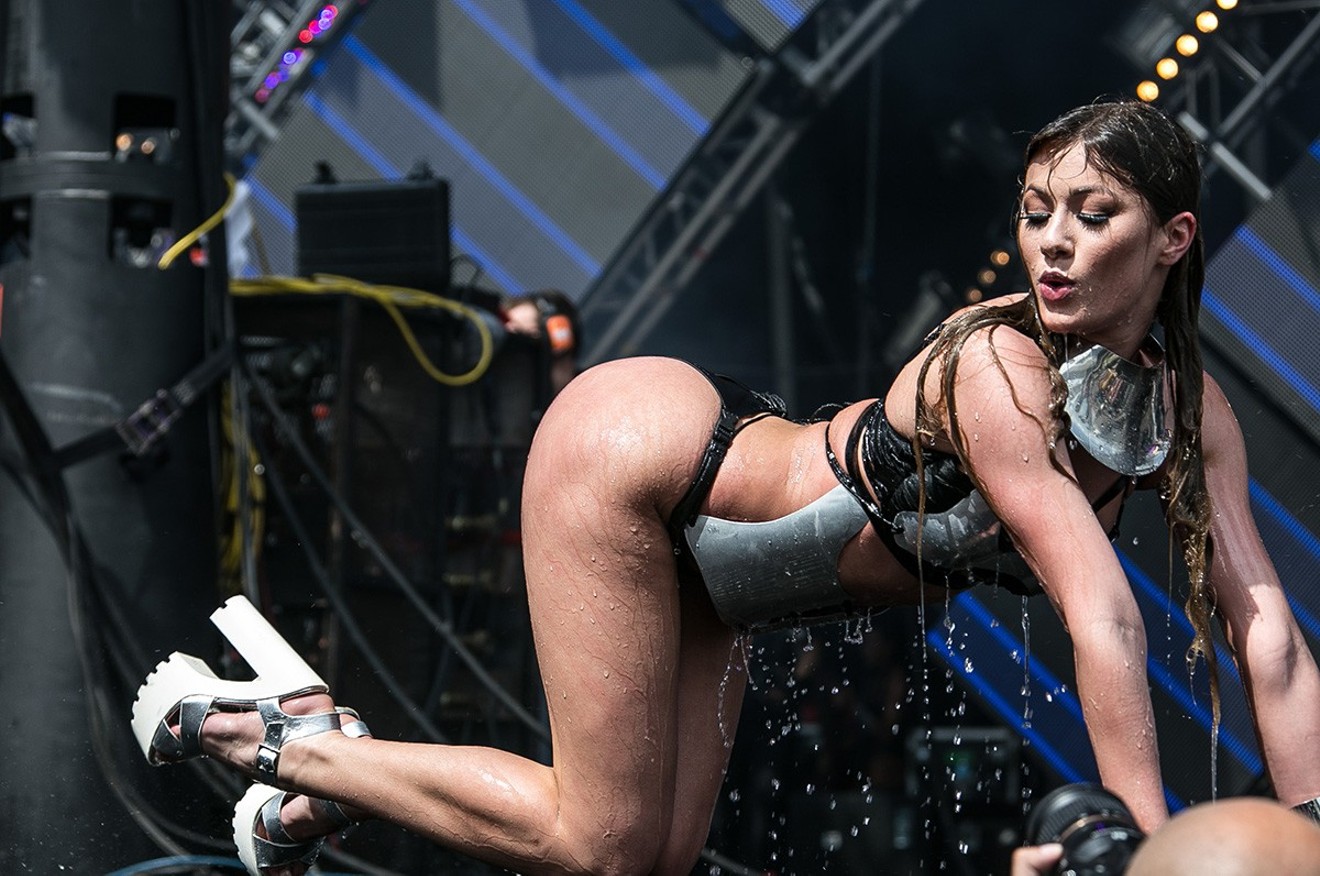 However, it wasn't exactly like last year's storm. In 2016, several performances were scrapped. This year, the show went on. And thank the dance gods for that, because Saturday's lineup was packed with powerhouse performances by Axwell & Ingrosso, Sasha & John Digweed, Dubfire, Ice Cube, the Prodigy, Afrojack, and many others. Stages such as the Carl Cox Megastructure provided the most coverage from the rain, but attendees made due with whatever could keep them dry. (Ultra even made a killing selling festival-branded ponchos.)

And New Times braved the elements to bring you these highlights from Saturday. 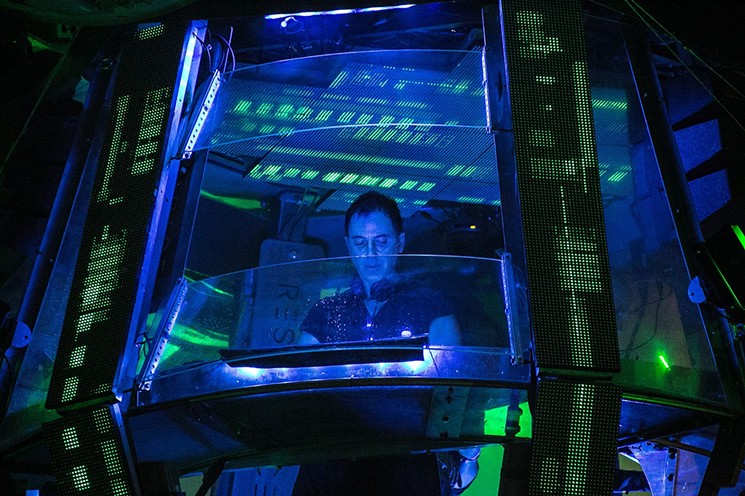 Unlike the Carl Cox stage, the Spider provided virtually no shield from the rain. However, techno fans didn't let that stop them from enjoying Dubfire's set. The Iranian DJ's music was the perfect soundtrack for the apocalyptic setting that included plenty of standing water even after the skies cleared. And instead of avoiding the muddy mess, the audience kept stomping to the beat. The flames from the stage seemed to go into overdrive, which was a welcome surprise thanks to the coolness that hung in the air. However, even for all the music, the Spider continued to be the star of the show, which included projection mapping that changed the look of the structure throughout the night. — Jose D. Duran

As in a scene from a '90s thriller or a momentous coming-of-age movie, the stakes felt high. Because Sasha & Digweed dispensed with the gaudy visuals employed by so many other acts in the Cox tent, the audience was able to focus on them doing what they do best: keeping the spirit of '90s rave culture alive. There was a considerable period in the set when no one could dance, because if they did, they risked elbowing their cold, wet neighbors. The rain imbued the massive spectacle with even more drama on top of releases of confetti and smoke. By the time the nocturnal set ended with the two DJs embracing in a bright light and Carl Cox declaring their set the best of the day, Sasha & Digweed had secured their 2017 outing’s place in Ultra history. — Zach Schlein 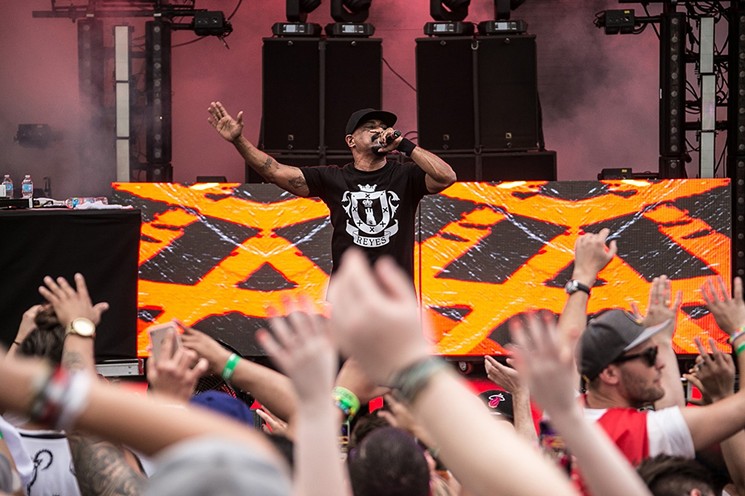 Photo by George Martinez
Cypress Hill at the Live Stage

Saturday afternoon, the Live Stage was the spot to be at Ultra. The crowd got lathered up early with help from A$AP Ferg and others. Then it was time for Cypress Hill, one of the dopest hip-hop acts of the '90s. They made it clear that in 2017, everything they do — their music, flow, and lyrics — still hits as hard it did 20 years ago. The group — two MCs, a DJ behind a laptop, and a dude crushing the bongos — knocked out a killer set of ganja-fueled hits that spanned two decades. They included “Dr. Greenthumb,” “Hand on the Pump,” and “How Could I Just Kill a Man.” Destructive beats coupled with verbal weaponry resulted in a sharp, ragged assault on the senses.

They covered Black Sheep’s “The Choice Is Yours” and set two sides the crowd against each other by having us rage to either “Jump” by House of Pain or Nirvana’s “Smells Like Teen Spirit.” The fact that Nirvana won in intensity should come as no surprise. Though Cypress Hill's members have always been the poster boys for weed smoking (and legislation), their music can hardly be characterized as completely chill or layabout; Cypress Hill was ahead of its time, but it was also a product of what came before. The members were followers of Run-D.M.C. and the predecessors of the drunken mistake Limp Bizkit. Cypress Hill did a version of rap rock that was right, before it became a taboo genre relegated to the embarrassing annals of music history. Yesterday’s set showed alliances — whether to rap and rock coming together or to B-Real and Sen Dog — that proved powerful. — Angel Melendez 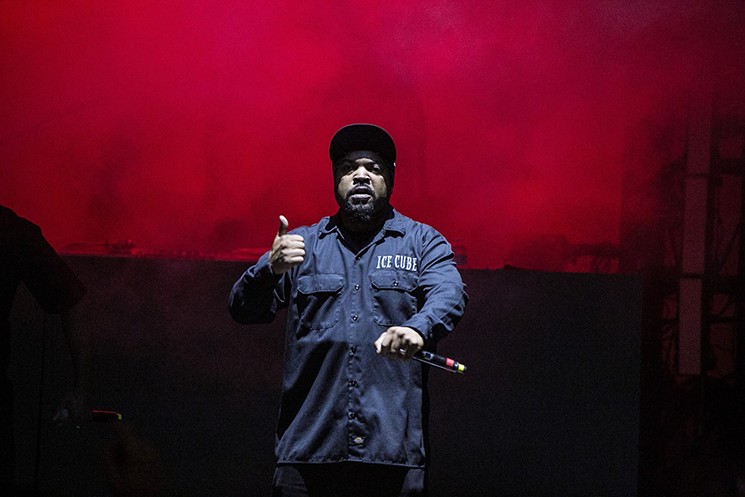 Photo by George Martinez
Ice Cube at the Live Stage

Rap icon, former NWA member, and Friday star Ice Cube continued the parade of hip-hop performances Saturday on the Live Stage. He was probably good. I mean, some of his songs sounded good, and his energy seemed ramped-up enough to match the setting, but honestly, who the hell knows? As Ice Cube took to the mike, a downpour of biblical proportions drenched every Ultra attendee, making us long for an ark. OK, maybe it wasn’t that bad, but the rain was definitely inconvenient. Miami is used to the random, spontaneous acts of weather that Mother Nature doles out like free candy; what we sure weren't prepared for yestereday was how cold the rain was. Not that Ultra helped in any capacity. A few fans attempted to seek refuge from the deluge under one of the structures at the Worldwide Stage before being kicked out by security. Only those in VIP, watching Cedric Gervais, were privy to the warm embrace of shelter. Ultimately, while Ice Cube was issuing the hottest of hits, the majority of the masses were more concerned with protecting themselves from what felt like actual ice cubes dripping from the sky. — Angel Melendez

Black Coffee had a major leg up on the hype competition going into his Saturday set. Earlier this week, famed Degrassi actor and well-known meme Drake had sampled — or more accurately, lifted nearly wholesale — the South African producer’s track “Superman” for his new playlist release, More Life. This, however, was not enough to make up for the cognitive dissonance between the music being played and the environment it occupied; unlike the maximalism that defined other acts at the Resistance Stage, Black Coffee’s smooth and melodic music seemed better suited to smaller, more relatively relaxed environs. At both his Ultra performance and his set at Damian Lazarus’ Get Lost event in the wee hours of Sunday morning, he mixed the Yamil & Stefani Crabuzza remix of Bill Withers’ “Ain’t No Sunshine.” It worked to greater effect in the hot and hazy corners of Get Lost, mostly because of the more intimate setting. Black Coffee is a recognized talent for good reason, as his lengthy career and and Drake’s cosign prove. But for future Ultra appearances, perhaps the music should better match the surroundings. — Zach Schlein

Photo by George Martinez
The Prodigy at the Live Stage

English dance outfit the Prodigy was easily one of the most anticipated sets at Ultra this year for several reasons. For starters, the group was scheduled to perform at last year’s festival but, much to the dismay of fans, dropped out at the last minute. In addition, the Prodigy hasn’t been to Miami since 2009, and anytime the group makes it stateside — particularly this far south — it feels like a special occasion. Call it delayed gratification, but a year on, the guys took the Live Stage they had previously abandoned and made it their bitch. With a fistful of electronic songs played at the tempo of punk and speed metal, the Prodigy helped the crowd shake off the rain and reboot the damp festival. The long wait and the tease of an almost-appearance last year dissipated once the guitars — and Keith Howlett and Maxim — fired up. Longtime fans were happily surprised with deep cuts from not just from the group’s breakout album, The Fat of the Land, but also numbers off 1992’s Experience and 1994’s Music for the Jilted Generation. It was a proper rave 20 years in the making with the gusto of a crowd that had every reason to dance, mosh, and lose their fucking minds. — Angel Melendez