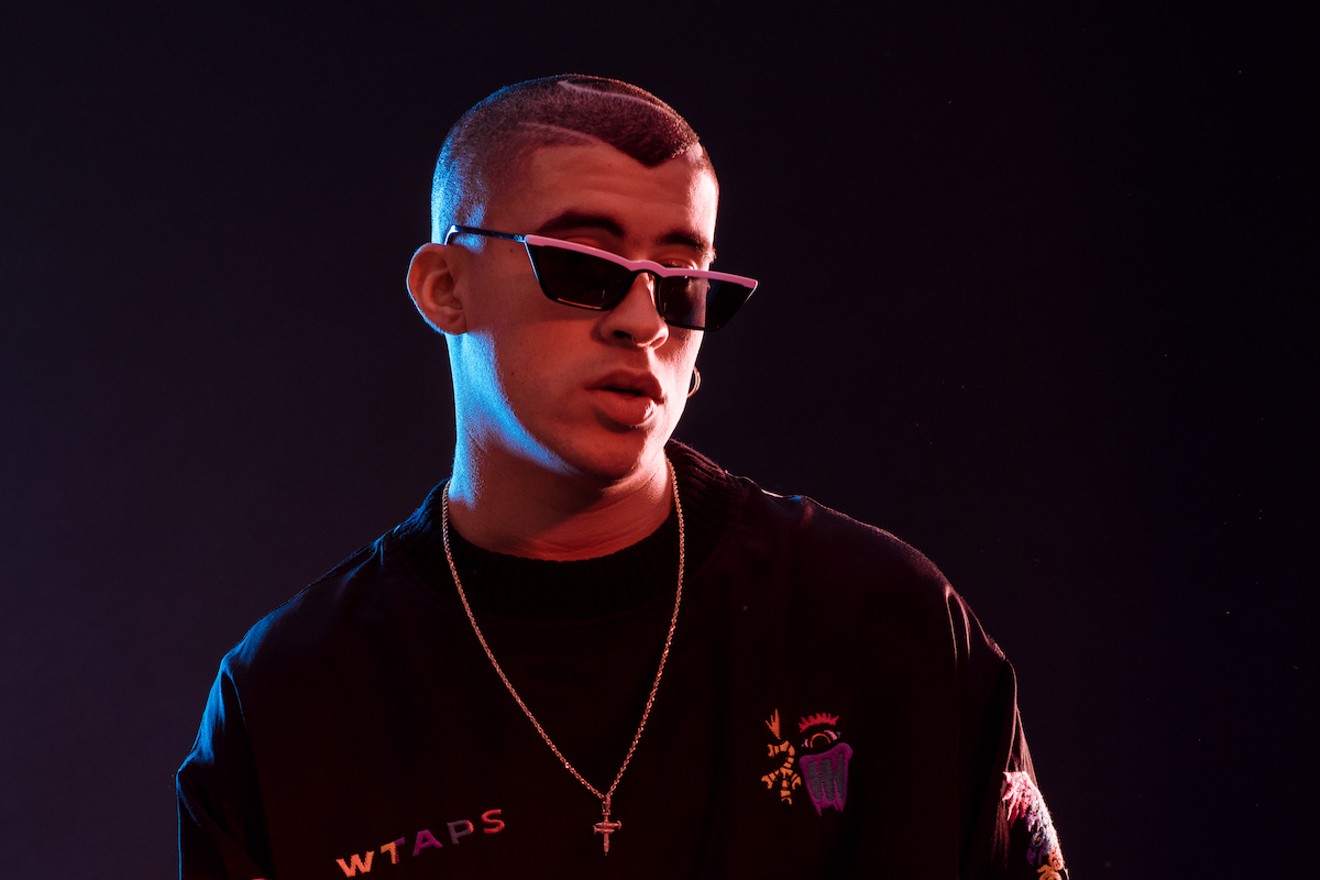 Bad Bunny Photo by Alejandro Pedrosa
Puerto Ricans are constantly calling Power 96 to play the new Ozuna, J Balvin, and Bad Bunny. That trunk-rattling bass with booming 808s and mumbled Spanish lyrics you hear over a gritty beat while sitting in Miami traffic has been dubbed "Latin trap," and regardless of whether you speak the language, trap en español is making its way into the music scene.

The cadence sounds familiar to hip-hop heads, but there’s nothing in music that Latin culture hasn’t made its own. The style of Latin hip-hop originated in Puerto Rico and is a subgenre of trap music influenced by dembow and reggaeton. Its pioneers have effortlessly fused Spanish lyrics with the ghetto attitude of rap beats, creating a style the rap community can relate to but not exactly understand.

Luckily, music is a universal language, so you don’t have to know Spanish to nod your head to Latin trap. But rap culture requires a deeper level of understanding and appreciation. Rap culture is so deeply tied to hip-hop, constructed by black culture, it begs the question: Where did Latin trap come from, and why did Puerto Ricans essentially adopt hip-hop and incorporate it into their music?

These days, cultural appropriators are getting caught red-handed. One of the biggest stars on the charts, Bruno Mars, often flavors his music a bit without crediting, acknowledging, or caring about the black community. The 33-year-old, who's of Puerto Rican, Filipino, and Spanish ancestry, uses his racial ambiguity — brown eyes and thick, curly hair against light skin and European features — to slide between cultures. But keep in mind: He’s not black.

Mars’ influence in funk, soul, R&B, and hip-hop is prevalent, and in interviews, he has claimed he grew up listening to black music. But the lack of cultural presence and experience in an artist who exploits that culture to catapult himself into the limelight doesn’t sit well in the hood. Mark Ronson's "Uptown Funk," on which Mars took lead vocals, sat on the Billboard charts for 15 weeks.

The funk-influenced banger brought fame to not only Ronson and Mars but also co-writer Trinidad James, an Atlanta-based rapper most popular for his single "All Gold Everything." Though Mars seldom speaks about the black influence in his number one hit, he sleeps well knowing he made over $2 million from the buzz-worthy song. In 2018, he took home six Grammys, half in R&B categories. He also snagged golden gramophones for album of the year, song of the year, and record of the year for funk- and soul-infused music while remaining racially ambiguous and not acknowledging his influences. As for Bad Bunny, although his fair skin and Puerto Rican roots are evident, he isn’t attempting to be anyone but himself.
Benito Antonio Martinez Ocasio was born March 10, 1994, in San Juan, Puerto Rico. He wasn't raised among riches and bad bitches but in a family household. He worked at a grocery store while attending the University of Puerto Rico at Arecibo before finding fame as a SoundCloud rapper. “I think if I keep working in the way that I am, from the heart and from passion and with love, well, the fruits of that will keep coming,” he said in an interview with the Fader, suggesting his music reflects nothing but his true self. Bad Bunny’s authentic culture, although he is not black, shows in his appreciation and respect for his native land, which differentiates him from Bruno Mars and other cultural appropriators in the game for their own gain.

Cultural appropriation is the adoption of elements of one culture by members of another culture. This can include a culture using the symbolism of another to ridicule or to adopt attributes for personal gain. Here, black culture is used to propel nonblack artists to fame and fortune mainly because black culture is fashionable. Culture is portrayed in music through language, genre, and delivery. In Bad Bunny’s case, you won’t hear a New York-style verse or lyrics about being poor in the streets. His hip-hop and Latin influences come from real-life experiences, not superficial trends used to make money.

His debut album, X 100pre — a stylization of por siempre, or "forever" — allows Bad Bunny to express several sides of himself. He rejected the idea of producing a stereotypical Latin album because he’s much more than that and wanted to cater to his urbano audience. "Estamos Bien," “Solo de Mi,” and “Mia” featuring Drake are the lead songs off the 15-track project. By introducing Drake to Latin trap and culture, which the Canadian rapper appropriates quite often in his music, Bad Bunny bridged a gap between hip-hop and Latin trap, allowing two backgrounds to receive the recognition they deserve.

It’s easy for music makers to get wrapped up in trends. Because the industry today is more about money than talent, artists can suffer an identity crisis while sending mixed messages through music. But in Bad Bunny we trust. His loyalty to his culture allows him to make beautiful sounds with ease by tapping into hip-hop, trap, reggaeton, and dembow influences and creating music that makes us all want to learn Spanish.

Bad Bunny. 8 p.m. Saturday, March 16, at American Airlines Arena, 601 Biscayne Blvd., Miami, 786-777-1000, aaarena.com. Tickets cost $51 to $161 via ticketmaster.com.
KEEP MIAMI NEW TIMES FREE... Since we started Miami New Times, it has been defined as the free, independent voice of Miami, and we'd like to keep it that way. With local media under siege, it's more important than ever for us to rally support behind funding our local journalism. You can help by participating in our "I Support" program, allowing us to keep offering readers access to our incisive coverage of local news, food and culture with no paywalls.
Make a one-time donation today for as little as $1.