The real Fab Four. Courtesy of Machete
It was the early '90s, and a couple of effortlessly cool juniors at Sunset Senior High decided they wanted to start a band. Confident, brash Luis Garcia and stylish, shy Ben Carillo ran through a couple of failed cohorts before Carillo suggested his friend, musician Justin Gracer. The group later added its longtime fourth member, cynical, clever Seth Berkey. With him, they christened the band Machete. It rose from a Pixies cover band to a Miami indie-scene sensation. The four played their last show together in 1999, but they've reunited this month to play their old songs at several shows in Miami.

When Carillo introduced Garcia to Gracer during lunch recess, "he was wearing crushed spectacles without lenses that he must've pulled from the trash or found on the ground," Garcia recalls. "It looked like they'd been run over by cars. He sat down on the grass and didn't say anything. I think I said, 'What's up?' but he didn't respond; he just opened his mouth to show me the three hits of acid on his tongue. Right then, I knew I needed this guy in my band." 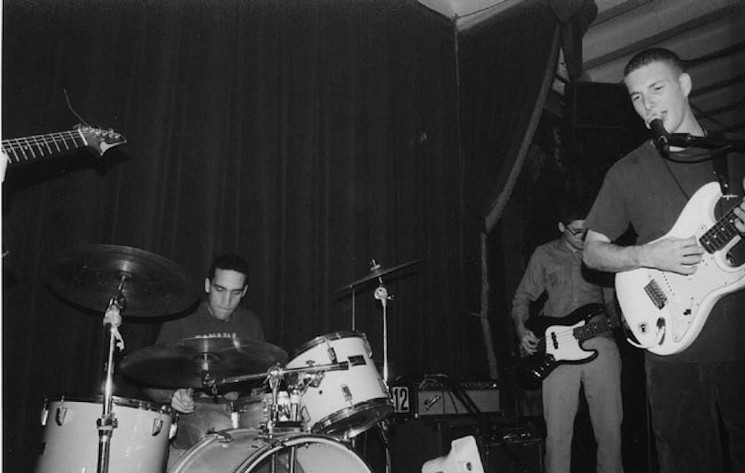 Brandon Sparling
Given that description, you can probably tell 41-year-old Garcia is a writer. He penned Missing, a collection of short stories published by Jitney Books, during his long stint in prison on drug charges, and hosts a Jolt Radio program by the same name. He also does what other 40-somethings do: He likes fishing, runs an exporting business, and manages a rental property in Key Largo. Carillo, also 41, was once one of the city's most sought-after DJs thanks to his massive record collection. Now he's a married Buddhist with three kids, lives in Miami, works at a frame shop, and makes microscopic sculptures on pinheads. Multi-instrumentalist Justin Gracer, 40, lives in Colorado and remains a mystery to his bandmate Garcia, who calls him "a tortured genius type." All he knows is Gracer makes music prolifically. "He's the same now as he was back then, but perhaps a little happier and less tortured now," Garcia says.

As a three-piece, they named themselves "Ghost Rider" to compete in a battle of the bands at Sunset High, which was also played by celebrated sludge-metal act Cavity. They took on a second guitarist, Brandon Sparling, who bumped heads with Gracer. Ghost Rider practiced constantly, night and day, at Garcia's house and even skipped school to do so. The group played parties all over Miami-Dade and gained traction by performing Pixies, Frank Black, Unrest, and Versus covers.

Brandon Sparling
At that point, Sparling left and the remaining three were joined by Seth Berkey. When Garcia met Berkey, the latter had an enormous mullet. "I was a huge asshole back then," Garcia admits. "He was lighting things on fire. I don't remember, but Seth says the first thing I ever said to him was: 'Why don't you light your hair on fire?'" Berkey, now 40, is a married electrician and amateur inventor with three kids. He is exceptionally talented at fixing amps.

As Machete, the four began playing their own songs written by the group's mastermind, Gracer. "Our signature sound comes in large part from Justin's amp," Garcia shares. "Justin's dad owns an alarm company, and one day, I think, Seth and Justin got the idea to have his dad rig an alarm horn to the side of Justin's amp — which, by the way, interesting fact, was found in a dumpster. Seth and Justin took it home and fixed it. It's the amp we still use today. He can switch the sound from the speaker to the amp and distort it to make this unique sound that I've heard nowhere else."
Machete was a productive and busy act, touring its one-of-a-kind sound all over Miami. Its first live show was at the Miami Beach venue Roses during an open-mike night, and the band was invited back. Berkey remembers playing a show with Tsunami and the Sonora Pine. "During that time, I was going to art school in Sarasota, and I used to come down all the time for shows," he says. He actually missed an exam and failed a class because of that show, "but it was still a highlight," he admits.

After a show at Churchill's Pub, noise-music guru and producer Rat Bastard offered to record the group, and the songs went on the band's first seven-inch. Machete thrived until 1999, but both Berkey and Garcia left the band because of troubles with the law. Carillo and Gracer soldiered on, adding Kris King of the well-known punk act Against All Authority on drums. Berkey later rejoined that iteration of the band, which broke up in 2002.

Brandon Sparling
The recent reunion was sparked over drinks and sausage at the Coral Way bar the Mighty. Gracer was in town visiting, and after some beers, he asked his former bandmates, "Wanna go jam at my dad's warehouse?" Gracer's father used to be in a band called White Mud and had all the requisite equipment. Days later, they dove right into the old sounds, and Garcia says it was magical. "It all came right back. Muscle memory felt so real that night. We forgot some parts as we were playing, and we'd all look at each other like, What's the next part? but when the part finally came, we all fell right into it. It was like we didn't know what we were playing until we were actually playing it."

Next, Carillo joked, "So when's the show?" To their surprise, a reunion fell into place. "Justin went back home to Colorado and started re-recording Machete songs, making versions of a lot of them without drum or bass or second guitar tracks so that we could each practice on our own. Also, for practice, we use old recordings and tracks from the album and seven-inch. Since then, we have all been practicing solo, on our own."

Brandon Sparling
Gracer has returned to Miami until the end of October. The group already played its inaugural reunion show at an opening at Placeholder Gallery. It was the first time the four performed together in front of an audience in 20 years. "The energy and chemistry were electric," Garcia says. "We only had three rehearsal sessions before the show, but the result was powerful. We're definitely more psyched than before. I think we were all a little nervous about how it was going to sound, but in the end, it was a powerful set, and we were happy."

It's kind of crazy when you realize you're old enough for a reunion. But many Miamiams were growing up at that time, the kind of music made by Machete. And those of us who remember can reclaim some magic from our tropical suburban youth at Las Rosas this weekend when Machete performs with stoner-metal act Torche and next weekend at Churchill's with Sumo and Pocket of Lollipops.

"After that, Machete will probably disappear again, for years or forever," Garcia says, before adding mysteriously, "but who knows?"

With Sumo and Pocket of Lollipops. 9 p.m. Saturday, October 27, at Churchill's Pub, 5301 NE Second Ave., Miami; churchillspub.com. Admission is free. Ages 18 and up.
KEEP MIAMI NEW TIMES FREE... Since we started Miami New Times, it has been defined as the free, independent voice of Miami, and we'd like to keep it that way. With local media under siege, it's more important than ever for us to rally support behind funding our local journalism. You can help by participating in our "I Support" program, allowing us to keep offering readers access to our incisive coverage of local news, food and culture with no paywalls.
Make a one-time donation today for as little as $1.