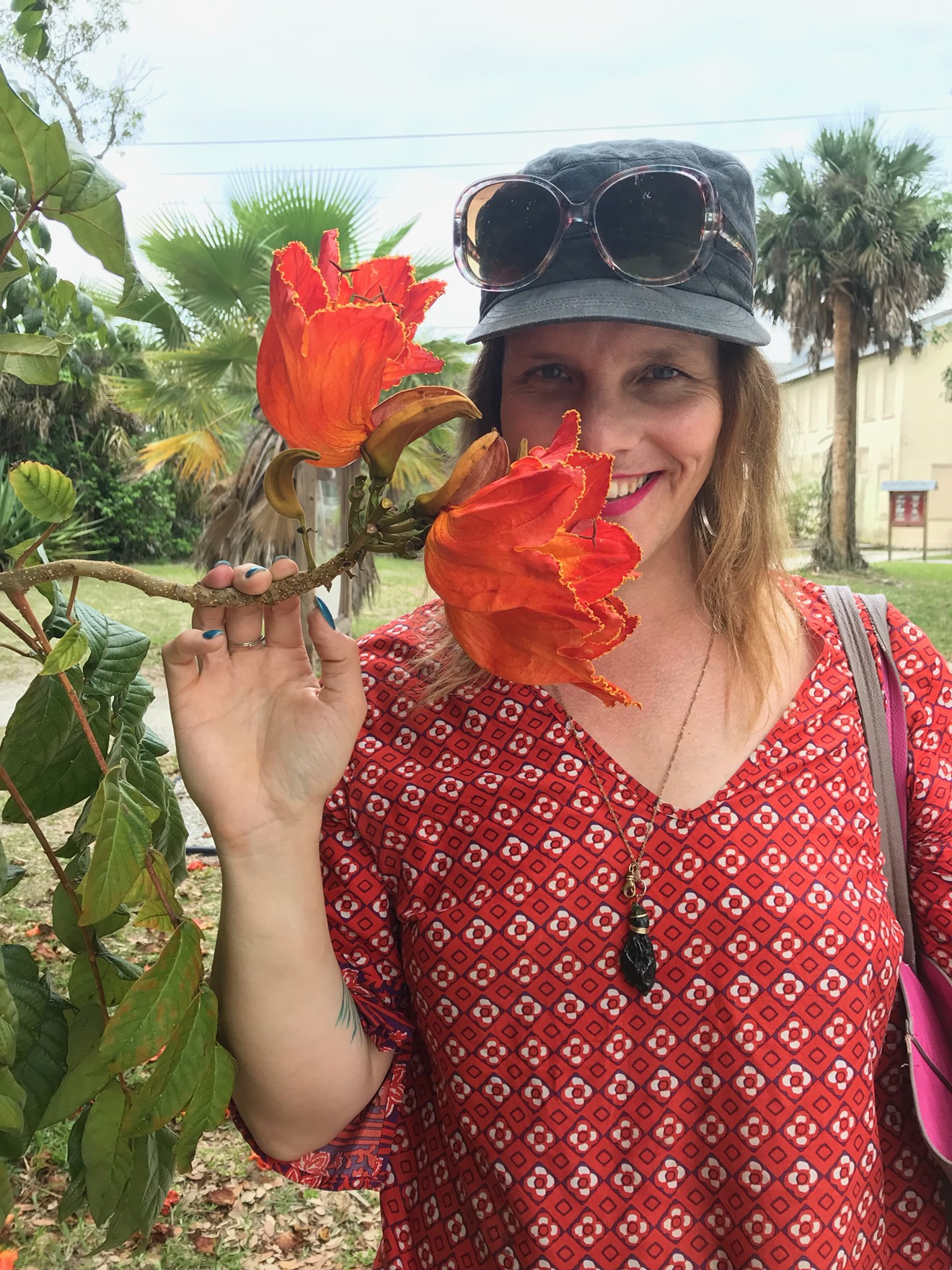 Prolific artist Erica Dawn Lyle is best known for her work with Bikini Kill. Photo by Midnight Piper Forman
In the late '80s, the punk scene in South Florida was rife with skinheads and violence. In geographically isolated Miami, young punks built a world based on ideas gleaned from the media's view of the lifestyle. But there was a group of dedicated creative people — such as wildly prolific musician, artist, and writer Erica Dawn Lyle — who were building, she says, “a different kind of punk scene that revolved less around punching people.”

Lyle, a guitarist, is the newest member of famed punk outfit Bikini Kill. With her project Sobbeth, she’s bringing a film and performance exhibition crafted with her partner Midnight Piper Forman to the Museum of Contemporary Art North Miami, titled "Our Place in the Sun." Lyle also produces the long-running zine Scam, which she’ll discuss live as part of a Q&A with Vasari Project and Dale Zine later this month. She's also written a couple of books and for major art outlets such as Artforum and has been involved countless musical projects, including Black Rainbow. Plus, October 19, she'll perform at Sweat Records as part of the "free hardcore" two-piece improv act AquaShade.

When Lyle was a teenager in Palm Beach County, she fled a violent home and found friends such as musician and graphic designer Chuck Loose in Miami and Fort Lauderdale. She and Loose started a band, Chickenhead, with their friend Buddha. They also made zines — his was Get Loose and hers was the left-leaning antiwar and anti-gentrification Scam, which was, at the time, "like an unapologetic guide on how to live completely for free, outside of having a job," she says. They began booking shows and bringing in bands from California and Seattle to form an under-the-radar DIY scene.

The first Chickenhead show went down in a backyard in South Miami. Lyle was unaware, but Loose had swallowed a box of Nyquil capsules and just flailed around. The crowd loved it. The deconstructed and "falling apart" act was kind of intentional. "It really polarized audiences, and the people who were interested in fun, goofy punk shows joined up in our scene," she recalls. "It was, in a way, performance art, where we were performing the violence inside of the band on the stage in a way that created new music that no one could punch each other to... We kind of turned the spectacle of the audience punching themselves into the band onstage.”

Lyle was also interested in activism. She and her friend Ivy Jeanne started a Food Not Bombs chapter in Coconut Grove, where they squatted in abandoned buildings. When she moved to San Francisco in the late-’90s, she began writing about bigger issues in print, aimed at community-building and activism. “I learned that making a publication is a really great way to find your people. A magazine imagines in advance the kind of people that it aims to be received by,” she says. She worked in social service agencies, such as the Coalition for Homelessness, alongside other punk rockers. And she wrote about the struggles facing the people around her.

Jeanne and Lyle created the Turd-Filled Donut, a newspaper offering articles and personal-interest stories about the Skid Row neighborhood. It gained a wide audience around the turn of the millennium, when Jeanne recorded an interview with San Francisco Mayor Willie Brown, responding to her questions gathered from his constituents. “He gave this really frank, kind of Machiavellian, evil, anti-poor answers. He didn’t take [Jeanne] seriously," Lyle says. Subsequently, the recording became an issue during his reelection campaign. Since 2006, Jeanne and Lyle have also played as Black Rainbow and recently released a digital acoustic album, Center of the Mile, as Ivy & Erica. The proceeds support the Emma Deboncoeur Scholarship Fund for transgender women in the public health program at the University of California, Berkeley, in honor of their late friend Emma.

Lyle learned many things about DIY in South Florida that she took with her to other scenes. In Miami, there weren't many punk venues, so she and her friends would head to the edge of the Everglades with a generator and do full-day shows. In California, during the dot-com boom, there were no venues for bands like Lyle's to play. “So kind of as a protest and kind of as a show of strength,” she says, “we started doing generator shows in San Francisco.” Illegally, right in the middle of town, while using power outlets at bus stops, they dared authorities to shut them down. No one ever did. The shows thrived and survived. “We basically created a permanent venue,” she says.

More recently, with other artists she met at the Black Mountain School outside of Asheville, North Carolina, Lyle went in on a new DIY artist space, 7 Belvidere. Located in a Bushwick, New York shipping container, they host a monthly lesbian speakeasy, Valentine’s Day-letter writing for imprisoned sex workers, and events with a group that distributes free food and Narcan, a life-saving drug that can reverse the effects of an opioid overdose.

In addition to her work with Jeanne and the Black Mountain School artists, Lyle began working on an ongoing multimedia project on the mythology and future of the Sunshine State — "Our Place in the Sun" — with Forman around the time of her gender transition, “which began rather abruptly,” she says. It began the day in 2016 when the Electoral College announced Donald Trump president.

“It felt like a real compulsion at the time. I had just put out an issue of Scam and I just finished up an epic tour of [my book] Streetopia. All year I had been putting off this sense that gender transition is what I needed to happen. It was really on my mind. I felt like at that time, the things that were going to be coming down the pipe from Trump and the people running this country were going to be so difficult to face in the next couple of years, that prior political ideas of what you do to face it would not work. I felt like the situation required from me a massive personal reorganization of self so that I would have the greatest core integrity to face this time even if it put me in greater physical danger. I needed to be moving from the truest possible place.”

She and the Los Angeles-based Forman share “a really intense interest in radical geography and exploration," which fueled "Our Place." Right before her transition, Lyle drove around Florida looking for women’s clothing and filming the Sunshine State. “The two things started to blend together: gender transition and this Florida postapocalyptic road movie,” she says. To make the film, the two trespassed and visited ruins of Old Florida. The project tells the story of a transgender woman in a cheap hotel watching what happens to society as the state gets swallowed by the Atlantic Ocean and people start moving to Mars. At MOCA in North Miami, the two will show edited sequences of the project alongside Lyle’s live readings about Florida.

After a lifetime of creating DIY projects across the media spectrum, the project that's brought Lyle the most visibility is her work with Bikini Kill. When the riot-grrrl act reunited, drummer Tobi Vail thought of former bandmate Lyle. Although she was nervous about her safety in elevating her profile as a trans person, she also thought the spotlight might make her life a bit safer.

The band began practicing in May 2018 as Lyle jetted between band practice in Los Angeles and filming in Florida. As a DIY artist playing in a high-profile band, a statement Henry Rollins once told her during an interview for L.A. Weekly echoed in her mind: "Joining Black Flag was an intense learning curve every minute of the day." But with Bikini Kill, Sobbeth, and beyond, Lyle has enjoyed the process. She says, "It's been an epic year for sure."

Q&A With Erica Dawn Lyle With Vasari Project (MDPLS) and Dale Zine. 5 p.m. Monday, October 21, at 777 Mall, 141 E. Flagler St., Miami; manacontemporary.org.
KEEP MIAMI NEW TIMES FREE... Since we started Miami New Times, it has been defined as the free, independent voice of Miami, and we'd like to keep it that way. With local media under siege, it's more important than ever for us to rally support behind funding our local journalism. You can help by participating in our "I Support" program, allowing us to keep offering readers access to our incisive coverage of local news, food and culture with no paywalls.
Make a one-time donation today for as little as $1.