Miami Beach had plenty of electronic dance clubs with bouncers and velvet ropes, but it lacked spots that catered to locals — the young beach bums, low-key artsy types, and Europeans. There was Beehive on Lincoln Road and Home Cooking at Groove Jet, parties that have long settled into our sandy, tropical memories, but with the wildly popular Chocolate Sundays, Meinholz quietly harnessed that local energy and kept those classic beach vibes going for 15 years. It wound up being one of the longest running regular club nights in South Beach history.

Meinholz came to Miami from Milwaukee in 1996, and spent his time skating all day and meeting up with friends who knew where to score free drinks at night. Once he gained more clout in the scene, he was able to start his own party with Martina and Craig Hamlin, though it quickly became a one-man show with some additional cohorts over the years such as DJ Maneuvers.

"We wanted to create an environment that was cool to us; that skate, art, cool music vibe. What the locals used to be like," Meinholz says of his party. "It was so innocent and passion-driven." They also wanted to make a space where you could go out with $20 in your pocket and still be able to afford have a good time. That's why Craig Hamlin created the "happy meal," a Miller High Life and a shot of Jägermeister that only cost $5 and wound up being one of Chocolate Sundays' main draws.

"You wanted to find out what was happening, what was new; that was the whole point of going out to these parties, to socialize," Meinholz says. "You'd find out where the art shows were. People would be handing out flyers." People continued to come to Chocolate Sundays for that face-to-face sharing of cool ideas and events even after the popularization of Facebook and Twitter. To keep the party fresh and crowds coming back for more, Meinholz drew from the interests of his friends, and reinvented the party according to what they were into at the moment.

Meinholz says in many ways, Chocolate Sundays was also a night tailored for DJs, because it allowed them to come and play what they wanted. He also made it good date spot by showing screener copies of films in the back room that he got courtesy of a hookup on an Oscars committee. Meanwhile, TVs at the bar showed skate videos that partiers could watch while playing pool and dancing to hip-hop. A popular feature of the night was the Drunk’n Spelling Bee, a game in which people slur their way through the alphabet. It became a huge success with live shows and a dedicated following. There was a period of time when Meinholz even toured the party, having brought it to New York as well as Chicago, San Francisco, and to Austin for annual editions at South By Southwest.

After spending three-and-a-half years in Taos, New Mexico — where he and his partner founded Parse Seco art gallery — Meinholz returned to Miami this year to learn that Purdy was closing. After meeting with Dan Binkiewicz, the decision was made to throw two more Chocolate Sundays as a send-off to the bar. The last installments of the beloved party will take place on December 29 and February 2, 2020. The ideas is, Meinholz says, "just to bring all of the DJs back [and] have fun with it." 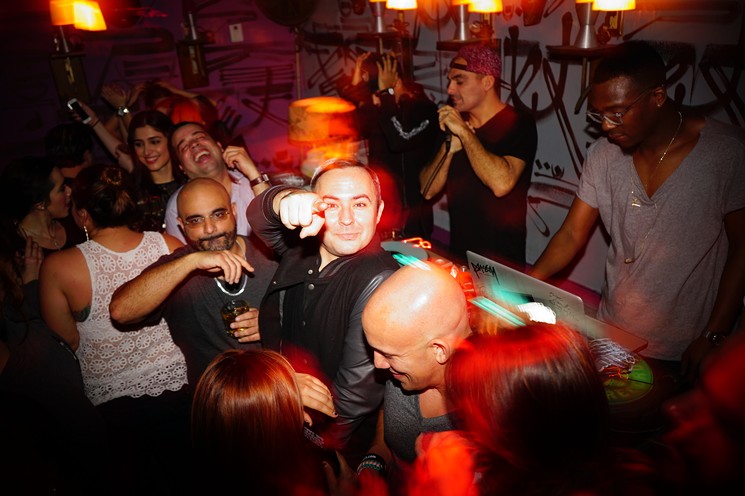 Chocolate Sundays at Purdy Lounge
Photo courtesy of Joel Meinholz
Soarse Spoken will be hosting a Drunk’n Spelling Bee, the winners of which will receive gift certificates to Miami vinyl shops Technique Records and Sweat Records. Meinholz notes that Lolo Reskin, the owner of Sweat Records, has always been a supporter of Chocolate Sundays and even brought in Andy Smith of the band Portishead to DJ in the past.

For the final installments, Meinholz is creating a collage of 1,000 snapshots from past Chocolate Sundays that show the history of the party through the years. In a sentimental move, partiers will be able to grab pictures of themselves to bring home as keepsakes. Many of the party's former resident DJs will also be swinging by to tend the decks, with the likes of Craze, Louie Arson, Maneuvers, DZA, Reid Waters, Contra, Roddy-Yo, and Mike Deuce all due to make appearances.

The return of Chocolate Sundays is the perfect way to celebrate Purdy and watch the sun finally set on the more innocent South Beach from the turn of the millennium.

Chocolate Sundays. 10 p.m. Sunday, December 29, and Sunday, February 2, Purdy Lounge, 1811 Purdy Ave., Miami Beach; purdylounge.com. Admission is free.
KEEP MIAMI NEW TIMES FREE... Since we started Miami New Times, it has been defined as the free, independent voice of Miami, and we'd like to keep it that way. With local media under siege, it's more important than ever for us to rally support behind funding our local journalism. You can help by participating in our "I Support" program, allowing us to keep offering readers access to our incisive coverage of local news, food and culture with no paywalls.
Make a one-time donation today for as little as $1.