A Love Letter to Jenny Lewis From South Florida

We're ready for you, Jenny. Photo by Timothy Norris
More than two decades into her groundbreaking music career Jenny Lewis has become one of the leading voices of her generation. From Rilo Kiley, the Postal Service, Jenny and Johnny, and Nice as Fuck to her solo work, every iteration of her music has been a vital soundtrack in our tangled headphones and influenced independent artists who've come after her.

The critically acclaimed singer-songwriter is touring in support of her latest solo release, On the Line, and she'll play a show at Revolution Live in Fort Lauderdale Tuesday, September 10. This is the first time Lewis has headlined a solo show in South Florida, so die-hards won't want to miss the experience. (You'll find this writer crying from Revolution's second-floor balcony.)

Though a solo sighting of Lewis is rare in South Florida, her legend looms large in the city's indie scene. It's hard to imagine growing up in suburbia without thinking of a time when Lewis wasn't in heavy rotation.

Palomino Blond's Carli Acosta remembers hearing Lewis first at a young age, when Acosta's parents played Rilo Kiley's "Portions for Foxes" on the Grey's Anatomy soundtrack. "That song is a masterpiece," Acosta says. "Really honest lyrics... The sweet synthesizers in it, that are kind of subtle, are just a really nice little accessory for the guitars, and that was maybe the first time I'd heard something like that." Acosta dove deep and discovered Rilo Kiley's debut full-length album, Take Offs and Landings, and its followup, The Execution of All Things, when she was in college — years after the albums were released. 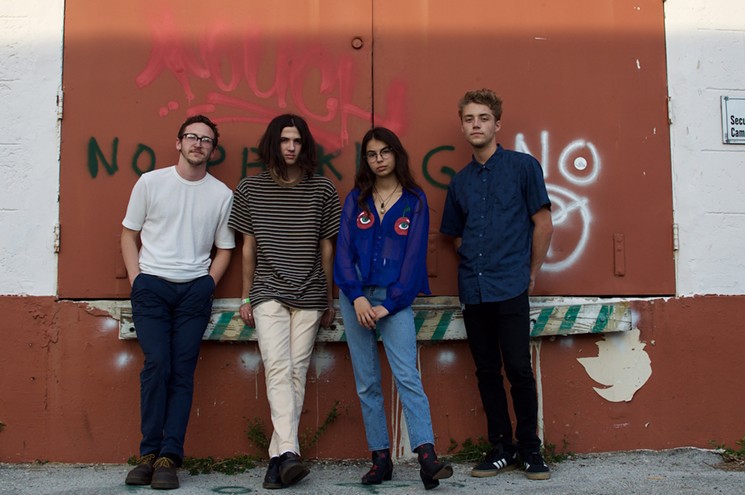 Palomino Blond's Carli Acosta (third from left) credits Jenny Lewis as an influence on her songwriting.
Photo by Nicole Cordoba
Dubbed New Times' best band from Kendall, Palomino Blond describes its sound as "genre-bending," combining emo, doom, punk, shoegaze, and dream pop. The eclectic band draws inspiration from a range of influences, and when it comes to songwriting, Acosta says Lewis' genre blending has been a major influence.

"She does kind of the country-pop thing solo," Acosta says. "And I love that because even though the genre of country isn't a big thing for me, I love hearing a blend of different things going on in a song, and power chords or bluesy rhythms combined, or a little twang in the delivery of a song I think is so cute. That's definitely influenced my own songwriting."

You can catch Millionyoung drinking Red Bull and Hennessy on the weekends.
Photo by Jessica Gibbs
South Florida's Mike Diaz, better known as Millionyoung, has been blending bright analog synths with layered guitars and vocals to create lush, tropical soundscapes for the better part of ten years. But the artist/producer says had it not been for Lewis' music, he probably wouldn't be making his own today.

He guesses he first heard her music in ninth grade but then laughs. "Trying to remember when exactly the first time was, it's kind of hard to think of because Jenny Lewis is one of those artists I've listened to for so long I can't even remember a time not listening to her," he says.

During his formative years, listening to Rilo Kiley and Death Cab for Cutie eventually led him to stumble upon the Postal Service, the supergroup composed of Ben Gibbard, Jimmy Tamborello, and Lewis. Being a fan of both bands allowed him to approach listening to electronic music in a new way.

Diaz ventured into writing from that perspective and began composing electronic beats while layering guitars to create "happy/sad melodies," at which Lewis is exceptionally good, he says. "I really like how she writes melodically but not bubblegum. She does a good job of being very catchy but in clever ways. The melodies are built into the chords; it's layered a lot." Monica McGivern (left), Alexandre Merbouti, and Nabedi Osorio.
Photo by Jayme Gersheny
Unlike Acosta and Diaz, Haute Tension bassist Monica McGivern admits, "I kind of missed the whole Rilo Kiley arc as I was pretty caught up in the theatrics and chaos of East Coast indie-rock darlings like Of Montreal at the time." She says it wasn't until 2014 that she discovered Lewis while photographing the Ray LaMontagne and Jenny Lewis show at the Fillmore while on assignment for New Times.

The following year, McGivern formed the band Mo'Booty (now known as Haute Tension). Lewis' influence crept in. "I was inspired by the confidence she exuded while singing and playing the piano and guitar," McGivern says. "I wouldn't ever reduce any woman to simply being a fashion icon, especially after such a successful career Lewis has maintained, but, hey, Miami is a fashionable city, and I feel like I need to mention the amazing rainbow suit she was wearing on that tour. Vogue even reported on it."

McGivern has taken a page from Lewis' book by adopting a wicked sense of style onstage. "David Bowie had Freddie Burretti, Nashville had Katy K, and New York has Amber Doyle outfitting the music industry's top stars. Fashion onstage is important, and I appreciate an entertainer that embodies that, like Jenny Lewis," McGivern says.

Although she's greatly inspired by the singer-songwriter's adventurous take on fashion, McGivern says Lewis' influence spans far beyond that realm. "From utilizing her commercial success to collaborating with artists like St. Vincent, Haim, and Mac DeMarco to raise money for charities like L.A.'s Downtown Women's Center and United Way, she appears to be a musician leveraging her success to create opportunity for others. Her audience at Revolution Live will see, as I did in 2014, she is much more than a fashion icon. She is a woman to be inspired by."

Jenny Lewis. With the Watson Twins. 7 p.m. Tuesday, September 10, at Revolution Live, 100 SW Third Ave., Fort Lauderdale; 954-449-1025; jointherevolution.net. Tickets cost $25.50 via ticketmaster.com.
KEEP MIAMI NEW TIMES FREE... Since we started Miami New Times, it has been defined as the free, independent voice of Miami, and we'd like to keep it that way. With local media under siege, it's more important than ever for us to rally support behind funding our local journalism. You can help by participating in our "I Support" program, allowing us to keep offering readers access to our incisive coverage of local news, food and culture with no paywalls.
Make a one-time donation today for as little as $1.