Travis Scott brought Astroworld to life at Rolling Loud. Photo by Rich Fury/Getty Images
Inflatable mushrooms. An enormous, caged spider. A glimpse into Astroworld. These were just three of the unique visuals that amplified the best performances New Times witnessed at Rolling Loud 2021.

The biggest hip-hop festival in the land has always been a hub where artists of all calibers can express themselves on stage however they see fit. This year was no different. Various artists were able to manipulate the stage to fit their mind-altering performances. While Don Toliver, Young Thug, and Travis Scott wanted to make a statement with their vibrant sets, others let the music and their slick dance moves do all the talking.

Throughout the weekend, New Times watched artists hit up all four stages at Rolling Loud with one goal in mind: to make an impact on loyal fans and gain new ones. Some made the experience sweeter by including a couple of surprises, while others bared their soul for the world to see.

Below, listed in alphabetical order, are some of the best performances that took place this past weekend at Rolling Loud 2021. 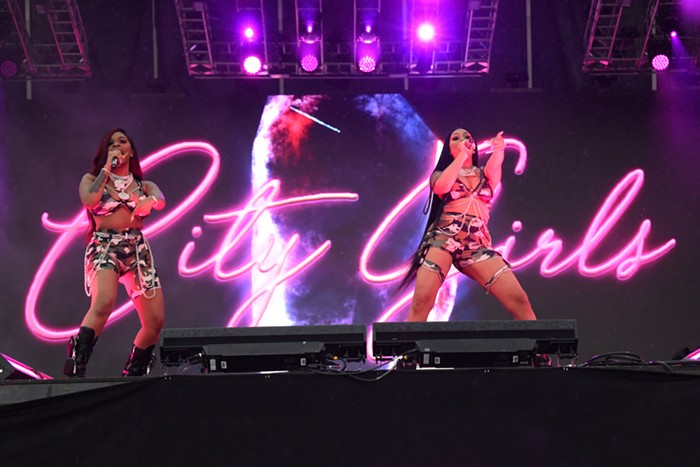 As always, watching the City Girls do what they do best is a religious experience. The Miami rap duo did not disappoint, taking the audience through its upbeat discography, all the way from "Act Up," to the recently released "Twerkulator." Yung Miami’s friend Saucy Santana also took to the stage to perform "Walk," a hit the crowd recognized instantly. The rappers exuded an unshakable sense of confidence and exuberant energy. City Girls’ music had people screaming their lyrics at the top of their lungs and twerking as hard as they could — all was as it should be. 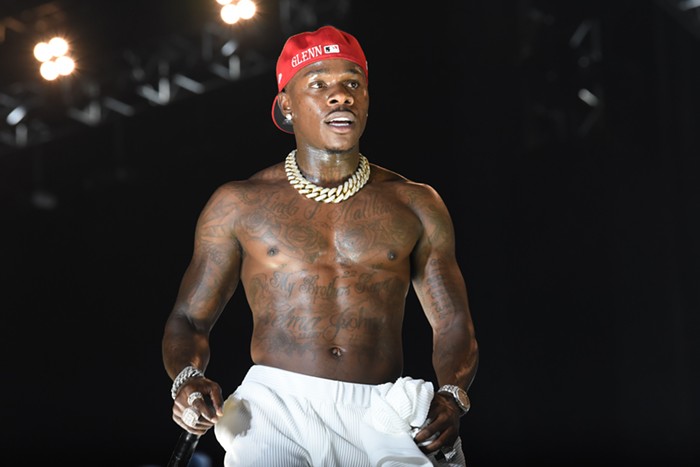 DaBaby promised he'd have the most lit set of Rolling Loud weekend, and he delivered. Following Megan Thee Stallion, the North Carolina native came out swinging to the tune of “Suge” in an all-white outfit and a red cap. Later on, his team brought an actual bed on stage for him and an exotic dancer to get freaky on during “Nasty." After she busted a few moves on the bed, DaBaby moved on, inviting to the stage a guest who was rocking an oversized DaBaby head to hide their identity. The crowd went crazy when Tory Lanez doffed the giant head to perform "Scat" with collaborator DaBaby. More surprises were in store. DaBaby brought out Kay Kilo to throw out a wad of cash in the air to help reimburse fans for copping the pricey tickets to the festival. He even gave away his own shoes and socks. It was definitely one of the most insane sets of the entire weekend. 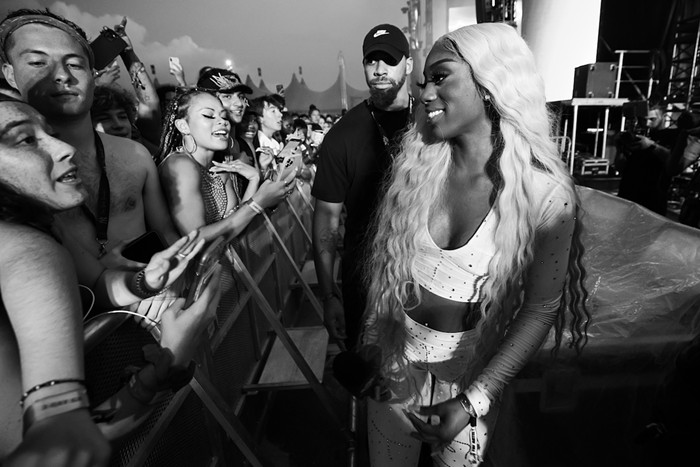 Delivering the performance of a lifetime on the Audiomack stage was Flo Milli, a breakout star on the rap scene in 2021. The set behind her was tailored to her young-adult audience, with a pink Y2K-themed collage bedecked with memes of Kourtney Kardashian and Tiffany Pollard, alongside photos of the cast of the 2001 cult classic Mean Girls. Flo Milli proceeded to perform "May I," "Like That Bitch," and other hits from her debut mixtape Ho, Why Is You Here? Fans made it clear that they couldn’t get enough “Flo Milli shit” — her signature catchphrase — as they didn’t miss a single word of her songs while twerking and pulsing to the music. Her girly-yet-punchy aesthetic continues to come further to the fore as she continues to gain cred, solidifying her as one of the female rappers — and rappers, period — pushing out viral songs. 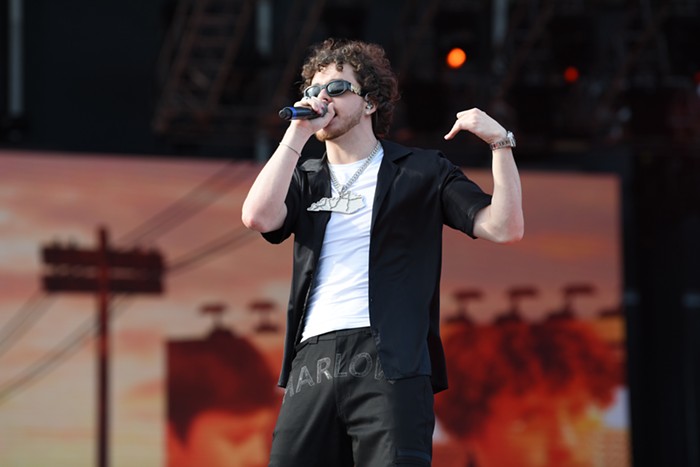 Jack Harlow has been an interesting character in hip-hop of late. Days after he appeared in Lil Nas X’s “Industry Baby” video, the Generation Now artist hit up Rolling Loud’s Ciroc stage to bring his newest smash to life. Harlow wasted no time enticing fans with songs like “Whats Poppin.” After bringing out comedian Druski to show him some love, Harlow introduced Miami Heat wunderkind Tyler Herro to perform his song, “Tyler Herro.” The Kentucky rapper then moved on to joints like “Already Best Friends” and “Warsaw.” Harlow has spent the past two years being touted as the next to blow. Judging by the size of his crowd at Rolling Loud, it looks like he’s become the famed rapper he’s always wanted to be. 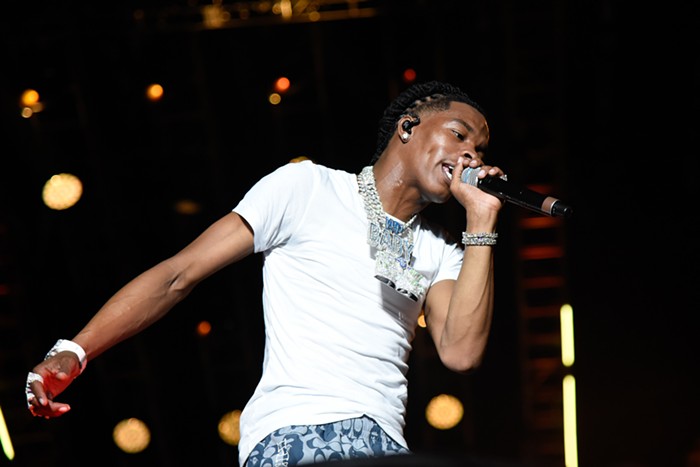 Lil Baby has delivered a handful of memorable performances this year, from his powerful show at the Grammys to his latest appearance at Rolling Loud. On Saturday, he had Hard Rock Stadium on lock for an hour as he provided hard-hitting bars and pure vibes. He came out of the gate screaming the lyrics to songs like “Get Money” and “Drip Too Hard.” The diamonds in his chains and rings glistened in the lights as he performed in crisp white T-shirt and blue shorts. As the Georgia rapper rocked it alongside dancers armed with water guns, the energy from the crowd was contagious, reaching a fever pitch when he brought out 42 Dugg to perform their hit “We Paid.” 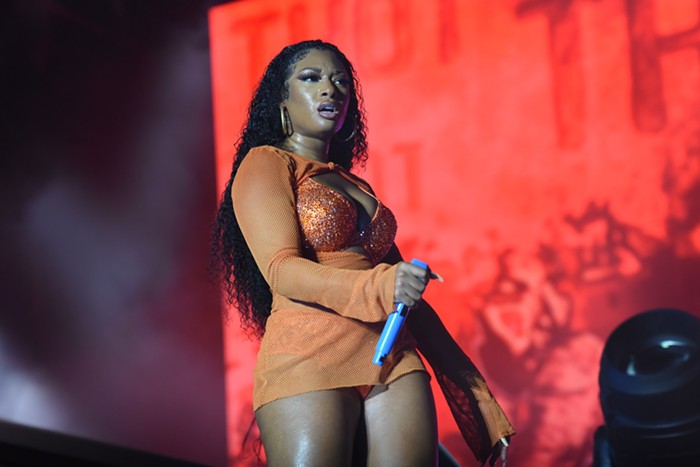 Hot girl summer wasn’t limited to a few months in 2020. For Megan Thee Stallion, it’s a state of mind. Her meteoric rise has made her an icon to Gen Z, to whom she symbolizes owning who you are and being happy with what you’ve got. That ethos was on display throughout her Rolling Loud performance, as the entire crowd — men, women, and everyone in between — shook what their mamas gave them to songs like "Cry Baby" and "Freak Nasty." Few performers can put their microphones to the audience and get much of a response, but Megan’s hotties had her back through and through. She brought down the house with a show that fans will remember for the rest of their lives.

Rico Nasty’s fans took the mosh pit to the next level. “You guys feel a little rusty?” she yelled. “It’s the last day. Open that shit up!” And open up they did. The punk rapper had everyone in the audience jumping and screaming her charged lyrics with a middle finger pointed at the sky. Social-media users watching the livestream who've complained that Miami’s crowds are lame need to spend some quality time with Rico Nasty. Her set truly felt like a rock concert, as she jumped across the stage sporting a bright red mullet and spiked skirt. She took fans through her best-known songs, including "Tia Tamera," "OHFR?," and "Pussy Poppin." This was no offbeat, aimless yelling, either — Rico Nasty’s bars and stage visuals were unique and impactful. If you’re looking to rage with a badass rocker screamo rapstress, look no further than this gem. 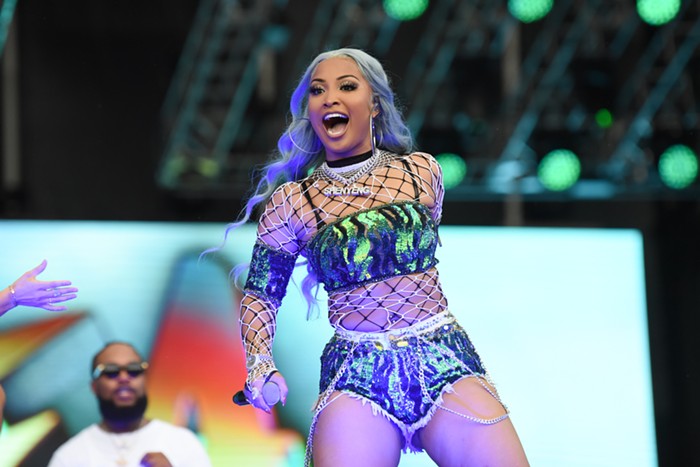 This Jamaican rapper is on the come-up. Shenseea lit up the stage with heart and authenticity. She wore her country’s flag on her sleeve, quite literally, as she was wheeled out onto the stage inside a human-size grill with the Jamaican flag plastered over it. Her performance was filled with gimmicks — but in the best way. At one point, she brought Famous Red onstage and they flipped upside down and twerked together. Her stage presence was unmatched, hyping up the crowd, which was very receptive and happy to be there. Even those who may have been unfamiliar with her music had a stellar first introduction to her fun, upbeat vibe. 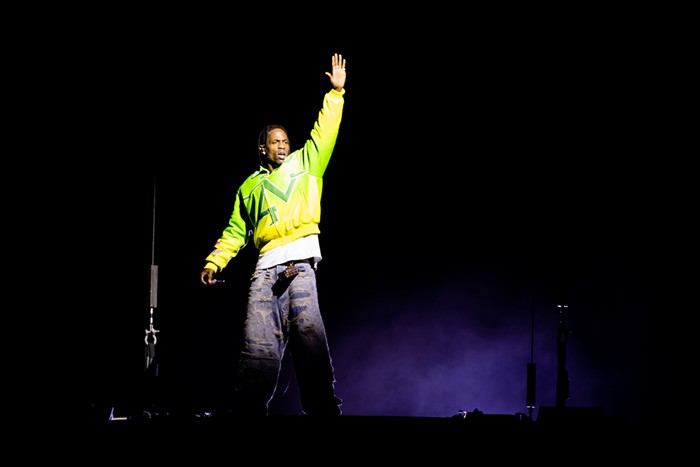 There’s nothing like a trip to Astroworld. The mastermind behind the sonic amusement park brought his vibrant stage setup and booming vocals during the second day of Rolling Loud. Scott kicked off his performance by debuting a new song off his upcoming album, Utopia. After premiering “Escape Plan,” the Houston rapper continued to belt out hit after hit, from “Highest in the Room” and his verse off SZA’s “Love Galore.” As he performed, a gang of green drones appeared in the sky above the Ciroc stage to spell out the name of his label (Cactus Jack) and a QR code, sending fans scrambling to take photos from wherever they stood. Later, Scott brought out Migos for their song “Straightenin” while preparing to board his circular platform. He wound up hovering above the stage as he performed his smash hit “Sicko Mode.” The crowd couldn’t get enough of Scott — and judging by the way they raged and roared with cheers, he left them hungering for more.

It’s been a minute since Wale hit the festival circuit. Once he stepped out on the Audiomack stage, fans hollered as they ran toward him to catch every minute of the set. The “Angles” rapper belted out a slew of his popular tracks, from “Poledancer” to “Bad” to “Sue Me.” Wale definitely felt the love every time the crowd echoed the lyrics to his songs. Toward the end of his set, the D.C. native brought out singer Eric Bellinger to perform their collaborative joint “G.O.A.T.” Bellinger hung out on stage to help Wale bring other bangers to life like “On Chill” and “The Matrimony.”
KEEP MIAMI NEW TIMES FREE... Since we started Miami New Times, it has been defined as the free, independent voice of Miami, and we'd like to keep it that way. With local media under siege, it's more important than ever for us to rally support behind funding our local journalism. You can help by participating in our "I Support" program, allowing us to keep offering readers access to our incisive coverage of local news, food and culture with no paywalls.
Make a one-time donation today for as little as $1.
Tony M. Centeno
Contact: Tony M. Centeno
Follow:
Twitter: @_tonymc