See more photos from Rolling Loud 2019 here. Sage Pacetti
When you think of Rolling Loud music festival, one of three things comes to mind: an extremely stacked lineup of hip-hop’s current greatest, pounds of marijuana, or risking your life to say you were there. The fifth annual iteration of the festival was held at Hard Rock Stadium in Miami Gardens, and if you weren’t prepared to rage, you were in the wrong place.

Last year was Rolling Loud’s first time at the Hard Rock, and of course there were hiccups. The festival’s poor setup and the abrasive crowd made it extremely hard to enjoy the three-day celebration of rap music. This time around, guests were expecting that organizers had worked through the kinks. But even though there was progress, nothing is perfect.

This year's festival had a setup very similar to last year's. The grounds hosted three stages: the Audiomack, the Monster, and the massive Loud stage. The Audiomack and Monster stages were perched right next to each other on the northwest side, while the Loud stage sat on the southwest side of the stadium. It was clear this wasn’t the best set-up because many people attempted to stage hop, but organizers opted to give the same floor plan another try. 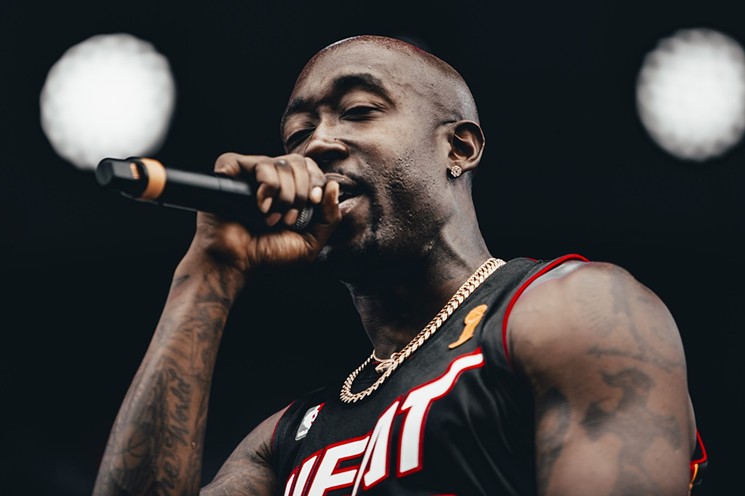 Freddie Gibbs. See more photos from Rolling Loud 2019 here.
Sage Pacetti
Because the two smaller stages were so close together, some fans ran between them to catch their favorite stars. (You can read reviews of these performances here.) But the noise bled terribly, creating a lackluster experience for those caught in the middle. Between the stages were a giant Ferris wheel, a swing ride, and multiple Instagram-worthy inflatables and Rolling Loud logos. Guests took their time posing on each item for the perfect clout photo to make their friends back home who couldn’t afford $400 tickets jealous.

You could tell the festival organizers wanted to improve the guest experience by including more interactive activations and installations. There was a photo booth, a photography display of your favorite rappers, art dedicated to late performers, a skate ramp, walls dedicated to "five years with Rolling Loud," and an art display with shipping containers. While it looked good on paper and on Instagram, the lines for rides were extremely long, making them hard to enjoy.

What most do want to enjoy is free water, but anything for free in any situation causes chaos and despair. Every year for the past three years, there has been free water. Each of the past three years has included a serious problem. While bringing your own bottle to fill might seem like a great idea and money saver, the long lines and pushing and shoving made every cent of the $5 water worth it in the paid lines.

Though the festival ran smoothly for the most part, all hell broke loose around 10:30 p.m. when festivalgoers near the Loud stage thought they were going to lose their lives. A fight broke out, causing thousands of guests to stampede. This left several trampled and hurt in the mixup. The panic repeated several times, causing guests to do whatever they needed to exit, including hopping fences. “I need everyone to calm down,” a voice said over the sound system. "This is a false alarm. There is no gun, there were no gunshots, and the police are investigating the area, but I need everyone to calm down.” 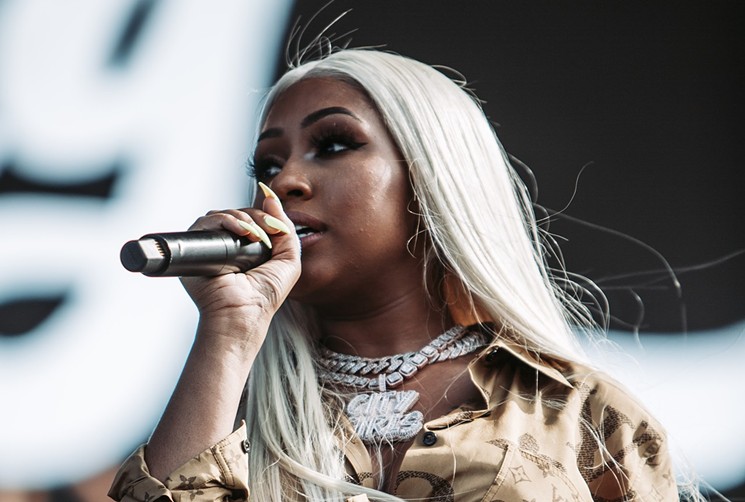 Yung Miami of the City Girls. See more photos from Rolling Loud 2019 here.
Sage Pacetti
Many guests had already left, thinking their lives were more valuable than seeing Cardi B twerk in a pink thong. But paramedics did tend to those that were hurt. It didn’t stop fans from demanding refunds and posting photos of their cuts and scrapes. The panics proved festival's floorplan was flawed. Guests struggled to find ways out which led to them destroying fences and landscaping at the Hard Rock.

The first day of any festival is a mess. It’s a true test to see if the planning, set, and safety measures put in place can withstand a scare, and unfortunately, they didn’t on the first day. New Times can only hope that day two, with headlining performances from Lil Wayne, Travis Scott, 21 Savage, and Waka Flocka Flame bring good energy back to the festival grounds.
KEEP MIAMI NEW TIMES FREE... Since we started Miami New Times, it has been defined as the free, independent voice of Miami, and we'd like to keep it that way. With local media under siege, it's more important than ever for us to rally support behind funding our local journalism. You can help by participating in our "I Support" program, allowing us to keep offering readers access to our incisive coverage of local news, food and culture with no paywalls.
Make a one-time donation today for as little as $1.