A Thursday mishap with a projection screen that fell over during setup didn’t stop fans from getting what they paid for.

Darylton Davis, 23, came to Miami from Alabama to see the City Girls. He said getting the COVID-19 vaccine helped ease his mind for the festival weekend: “I’m just lit now.

“It’s just something different,” Davis added. “This is my first festival, so it’s lit.”


The first day was high-energy and ran relatively smoothly as people of all ages donned festival wear: bandannas, cutoff jean shorts, body glitter, and the occasional shirtless man. It truly felt like a hip-hop carnival, complete with art installations, two roller coasters, and some carnival food.

Masks and physical distancing were few and far between. Florida currently has a 15 percent positivity rate, with more than 73,000 new cases as vaccination rates continue to lag. Fans, however, didn't bat an eye — either they were vaccinated or didn't seem to care.

Masks and physical distancing were few and far between at Rolling Loud. View more photos from day one of Rolling Loud Miami here.
Photo by Michele Eve Sandberg
With four stages for the first time in the festival’s history came some mishaps. The Audiomack and Monster Energy stages, tucked away further from the entrance than the other two, were nearly impossible to reach, causing hordes of attendees to push through the crowds in the bottleneck crossover that separated the two main sections of the festival.

And yet the show went on.

Rolling Loud’s patrons are far more diverse than ever before. Not only are locals scrambling to attend the hottest festival in town, but people from out of town are doing everything possible to enjoy the weekend-long festivities.

Kadii Johnson, 27, made it a family affair. She brought her niece from Chicago to Miami to enjoy the festival as part of her graduation present. It was her first time at a festival since the pandemic started. She was most excited to see Lil Baby perform.

“My niece graduated, and she wanted to come, so we brought her out here to get the experience and see what Rolling Loud is all about,” Johnson told New Times. “I feel fine. Everyone seems to be OK, so I feel OK about it.”


Wallace, also known as Wally Williams, 23, came to the festival from Georgia. Like many others, it’s his first-ever Rolling Loud. Mostly, he came “to rage out and have fun” watching acts like Morray and Travis Scott. 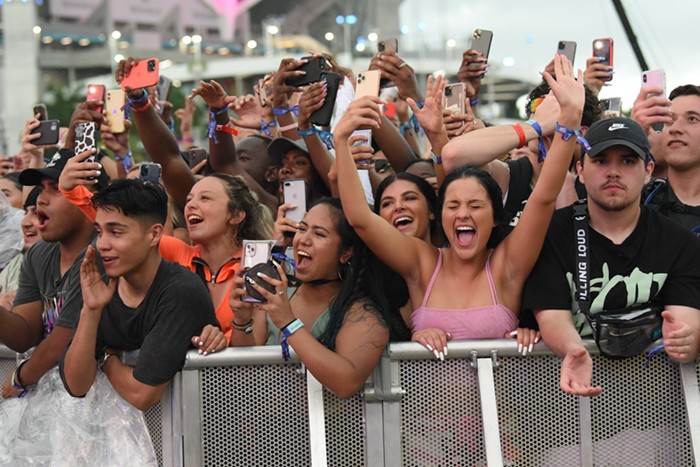 Fans were eager to see their favorite acts at Rolling Loud. View more photos from day one of Rolling Loud Miami here.
Photo by Michele Eve Sandberg
This year's new addition to the festival was the WWE Smackdown, an effort to engage younger rap fans with the sport.

“I’m excited about it because I’ve seen WWE as a kid, so it’s kinda cool to see both the things I like in one day,” Wallace said. “I just love it all.”

A group of four girls from Columbus and Dayton, Ohio — Ashli, Mo, Morgan, and Bianca — was excited to attend their first festival since the pandemic. The acts they were there to see were Lil Baby, Lil Dark, and Sada Baby.

Rolling Loud was the ultimate trip destination for the friend group.

Attracting a crowd from near and far, it’s safe to say that the festival's first night went off with hardly a hitch. Fans were more thrilled than ever to be back — and they didn’t miss a beat.
KEEP MIAMI NEW TIMES FREE... Since we started Miami New Times, it has been defined as the free, independent voice of Miami, and we'd like to keep it that way. With local media under siege, it's more important than ever for us to rally support behind funding our local journalism. You can help by participating in our "I Support" program, allowing us to keep offering readers access to our incisive coverage of local news, food and culture with no paywalls.
Make a one-time donation today for as little as $1.
Tony M. Centeno
Contact: Tony M. Centeno
Follow:
Twitter: @_tonymc