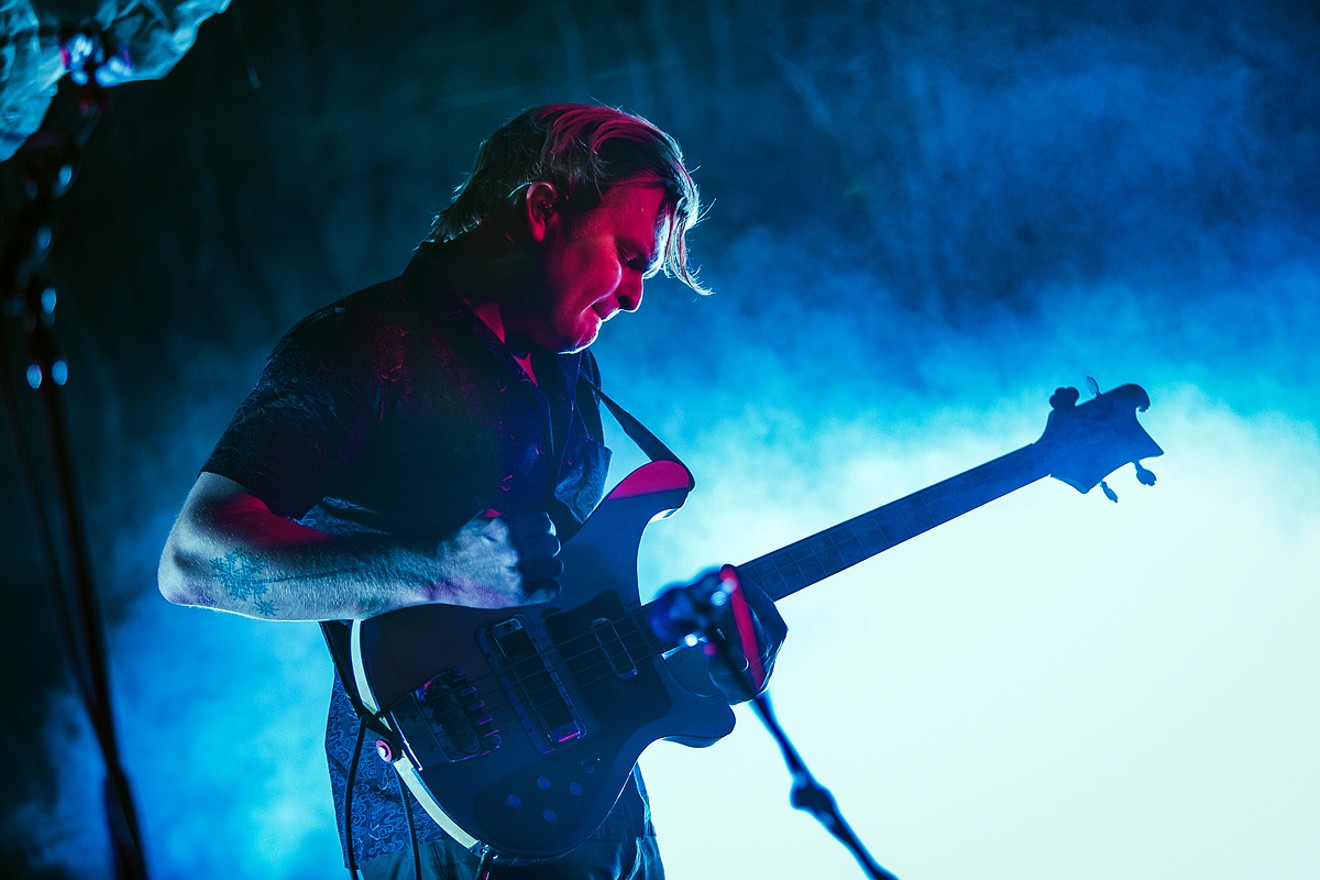 See more photos of Grizzly Bear at the Fillmore Miami Beach here. Photo by Ian Witlen
The last time Grizzly Bear came to Miami was June 18, 2013, the same day Kanye West’s Yeezus dropped. Across the bay from the Fillmore Miami Beach, the Miami Heat was beating the San Antonio Spurs in Game 6 of the NBA Finals. The opener was Majical Cloudz, which broke up in 2016, and when the main act came onstage, singer Ed Droste ran to the mike to share how excited Grizzly Bear was to finally perform in Miami.

I know all of this because I was there. It was my first concert. I remember being dazzled by the lights and overcome with joy while seeing one of my favorite bands in the flesh. Afterward, I scoured shopping malls for months looking for red trousers like the ones Droste had worn onstage. I had somehow gone 18 years without seeing a live show, but after that night, I slowly began to make a career out of it.

Such nostalgia means I’m probably the wrong person to be reviewing Grizzly Bear’s return to the Fillmore last night. I went into the show knowing that nothing could exceed the formative experience of that night four years ago. But damn if they didn’t try.

See more photos of Grizzly Bear at the Fillmore Miami Beach here.
Photo by Ian Witlen
There were a couple of problems. For one, the band was not quite as welcoming as before. They simply took their positions at the beginning of the set and commenced musical proceedings. Droste didn't wear red trousers, but a black tee and track pants. It took the energy of the crowd to get them to play along and banter, making cracks about going to the beach after soundcheck. And the romantic plastic-bottle lanterns from the previous show were replaced by ghostly curtains, dazzling strobes, and LEDs that fostered less intimacy and more temporary blindness.

What’s worse, much of the set was cribbed from their new album, Painted Ruins, the first blatant mediocrity in a formerly peerless oeuvre. Mind you, “the new album sucks” is possibly the most common, feeble complaint one can make, but every time they played a new track, the emotional impact of the show went flat. The old material was simply too high above the rest.

That’s the thing about this show: The lows were low, but the highs were soaring. Outside of new album tracks, the set list was even better this time around, setting hits such as “Two Weeks” and “Yet Again” next to unorthodox renditions of deeper cuts such as “On a Neck, on a Spit,” “Sun in Your Eyes,” and “Foreground.”

The openers excelled too. First was Acoqui, an Orlando band that paired shoegaze drones and effects pedals with indie-rock guitar shredding and a vocalist whose style was similar to Droste's. Serpentwithfeet, whom you might have seen at III Points, sauntered onstage in high-heeled, knee-high boots, red leather cargo pants with a black Barbie doll in one of the pockets, a very deep v-neck tank top, a full beard, a nose ring, and a beige beanie. He bantered with the audience midsong, improvising new lyrics without breaking the melody and crooning intimate, soothing poems — “adult lullabies” about sexual anxiety and the writings of Toni Morrison — in a tender, bewitching, hyperactive voice. He was a cross between a street-corner preacher and a drag-ball house mother; frankly, he almost surpassed the headliner.

See more photos of Grizzly Bear at the Fillmore Miami Beach here.
Photo by Ian Witlen
All things considered, last night’s Grizzly Bear show improved upon the 2013 appearance thanks to strong openers and the continued resonance of the back catalogue. First-timers in the audience would have had a good beginning. As for me, I’m just glad I got to hear the song I least expected but most wanted, “Fine for Now,” off 2009’s Veckatimest. I nearly went into shock as they played the opening chords. Alone in the crowd, I shook uncontrollably like a lone animal in a blizzard, overcome not with memories of youth but with the hopes and dreams the song inspired in me as a younger man. I’ve never had a stronger reaction to a tune, and I never will again — until the band returns.