Khalid. See more photos from Okeechobee Music Festival 2018. Photo by Herb Gonzalez
In three short years, Okeechobee Music & Arts Festival has become the top destination gathering of its type not only in South Florida but also in the state. As evidenced by its ability to draw contemporary headliner heavyweights such as Kendrick Lamar (year one) and Solange (year two), alongside after-hours favorites like Bassnectar, its strength is clearly in attracting a wide range of music fans.

But Okeechobee at times can feel like a forcibly merged pair of festivals. Grateful Dead flags and totems are just as easy to spot at campsites as Bassnectar T-shirts. Yet instead of homing in on a particular music fan, organizers have leaned into the dissonance, thus widening the tent for more onesie-clad weirdos.

The first items revelers saw when pulling into the campgrounds of the third-annual Okeechobee Music & Arts Festival were "amnesty boxes" where attendees could dump their drugs and without fear of arrest before their cars were searched. But the neon warpaint, glittered Porta-Potty floors, and hammocks full of people staring wide-eyed into deep space were indication that a fair share of illicit substances made it inside. 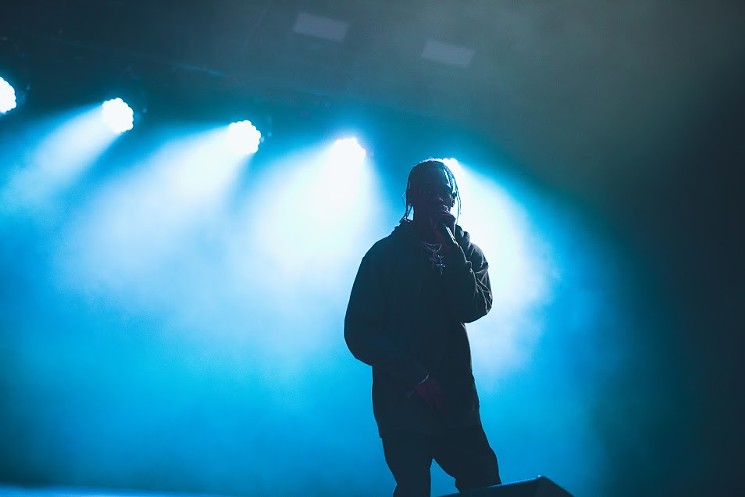 Travis Scott. See more photos from Okeechobee Music Festival 2018.
Photo by Herb Gonzalez
Even for the psychedelically uninitiated, Okeechobee was an inverted, utopian, Mad Max-style feast for the eyes. It was a world where water was free thanks to abundant refillable stations and where Wayne Coyne ruled the unicorn-onesied masses from inside his famous bubble.

"It's great to be outside with a bunch of freaks," Coyne said during a Flaming Lips set that included a cover of David Bowie's "Space Oddity" and "The Star-Spangled Banner" on guitar in a nod to the version Jimi Hendrix played at Woodstock in 1969.

The PoWow jam session that followed has become an Okeechobee Festival tradition and was a clear weekend highlight. The Roots fluctuated between playing as the main act and backing up Snoop Dogg and Chaka Khan, whose live voice unbelievably is better than in her recordings. The age gap at the festival became uncomfortably obvious, however, when Khan commented that she doubted much of the audience knew her songs. During "I'm Every Woman," one attendee pulled out his phone and said, "I have to record this for my mom."

Arcade Fire. See more photos from Okeechobee Music Festival 2018.
Photo by Herb Gonzalez
But Okeechobee expertly blended the legends of yesteryear with those of tomorrow. During his Friday-night set in front of mostly kids in their teens and early 20s, Khalid's natural talent was a revelation. Ability like his usually needs polishing around the edges, but only one year after making the jump from SoundCloud musician to touring artist, he's adept enough to comfortably command a festival crowd. There's no nervous laughter, fidgety pacing, or awkward banter. Even when the crowd reacted wildly to a girl flashing her breasts on the Jumbotron, Khalid, unaware of what had transpired, didn't miss a beat.

A weekend of glorious weather underscored the ways in which Okeechobee has perfected the festival model. A cloudless sky offered no respite from the Florida sun, but organizers set up plenty of oases and hidden havens for lounging during idle moments. Some attendees bathed in the water near the Aquachobee stage, while others sought shelter from the sun in beachside cabanas or metallic geodesic domes. Others lay in hammocks next to the Yogachobee yoga tent or inside habitable art installations.

Aside from Okeechobee's ability to book headliners such as Arcade Fire so early in its tenure as a regional festival, one of its most impressive assets is the commitment to staying green. Festivals could fairly be viewed from the outside as indulgent hotbeds of hypocrisy via trustafarian (read: trust fund Rastafarian) hippies creating enough waste to fill a landfill with plastic and cigarette butts in the span of four days. But Okeechobee, with the help of Clean Vibes Trading Post, has incentivized cleaning up by offering attendees the chance to trade in plastic, aluminum, and cigarette butts for prizes ranging from reusable thermoses to concert tickets, with a grand prize of two free passes to next year's Okeechobee Festival. The method appears to have worked. Small pieces of plastic were a rare sight on the grounds at the Aquachobee stage even the fourth morning of the festival.

Of course, no festival goes off without a hitch, and the looming bomb cyclone in the Northeast made for some last-minute schedule tweaks and cancellations. Twiddle, Shallou, and Smino were all forced to pull out because of weather-related travel delays, so Rob Garza of Thievery Corporation stepped in for a DJ set in place of Smino.

Even the schedule changes were easy to overlook if you weren't there for those acts. And because Okeechobee has doubled down on its approach to booking diverse talent, the only question left worth asking is which acts will be booked for next year and in the many years to come. As the fest's prominence grows, its lineups can only get better.