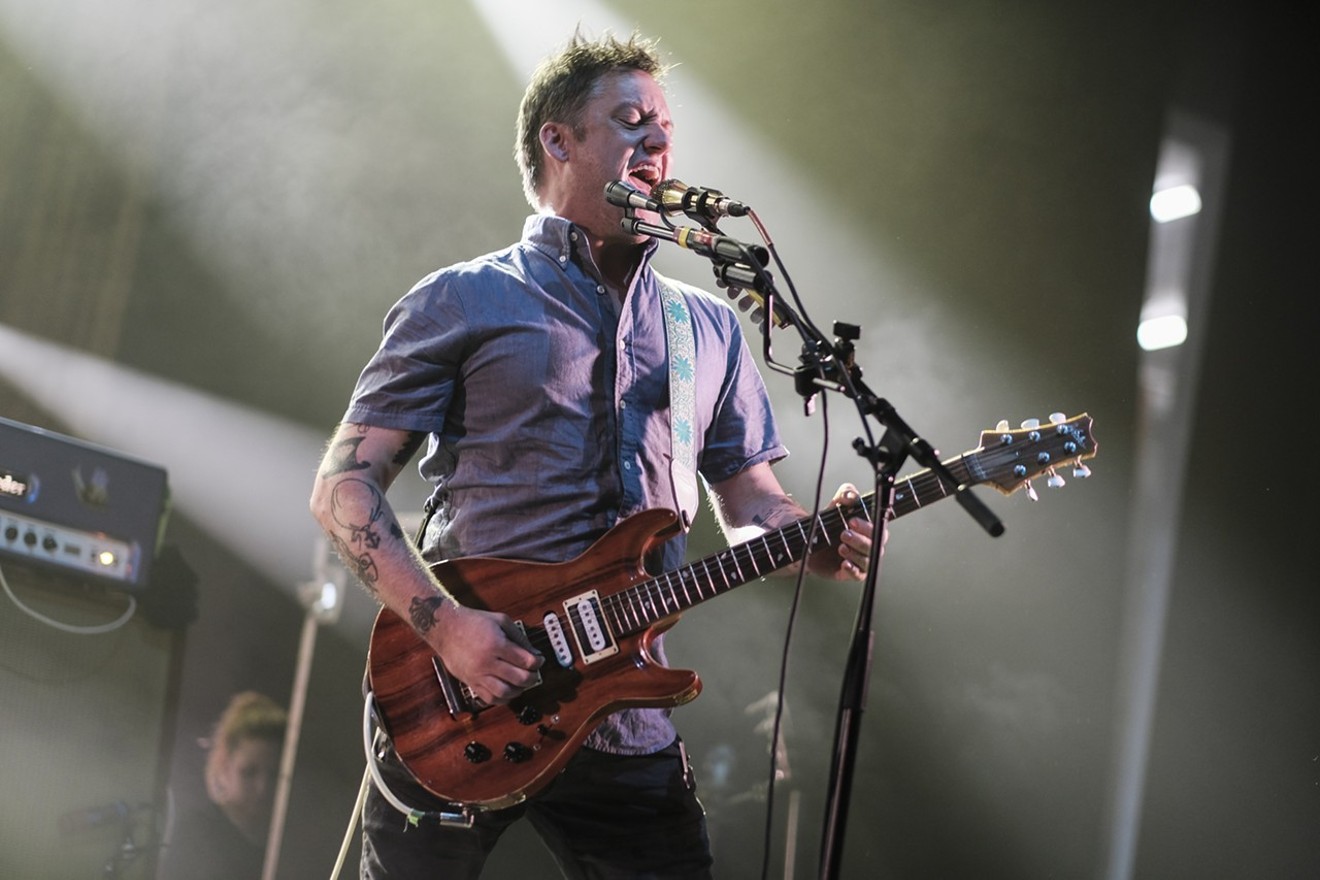 It wasn't until 1 in the afternoon that the Fillmore announced the City of Miami Beach — now under an evacuation order — said the show could go on. After a fire alarm forced concertgoers out of the venue, the show began with opener Mass Gothic. The New York-based four-piece started off slowly, living up to the Gothic part of the name, but as the half hour set went on, they amped things up. The drummer increased the rate of beats, and they started to sound a bit like Sonic Youth without the distortion.

Photo by FujifilmGirl
As the clock ticked past 9 p.m., it became clear the space would not be filled to capacity. There was much more elbow room than one would expect — until one remembered gasoline was a rarity. It was a night where the casual Modest Mouse fan did not show, only the die hard. And so when the lights dimmed and the buzz of cicadas came from the speakers, there was a roar. When the entire band came out and played "Dark Center of the Universe",  a majority of the crowd sang along to every word to the now 17-year-old song.

This is a band that has made many changes over its two decades. What was once a lo-fi trio, now is an army. There were usually eight musicians on stage, but at times a ninth player would pop out from the curtains. There was not one, but two drummers. A fiddle came out as did a banjo, and strange horns only someone who aced music appreciation classes could identify. There was even a woman backing on vocals adding a touch of femininity to "Perfect Disguise," a song that when originally recorded was a soundtrack for the lonely dude. But the one constant as always was Issac Brock, the singer and guitarist who brings a manic energy and a laundry list of lyrics.that are so wordy you wonder how he never skips a line.

Photo by FujifilmGirl
After they tore through a set that was heavy on songs from their latest album 2015's Strangers to Ourselves, they took a little breather to allow their loyalists to scream for them. They came back out and played some older tunes like "Night on the Sun" and "Dramamine". After the hootenanny that is "This Devil's Workday," the band left again, but the audience did not. With the house lights off, they screamed for more music. A second encore had Brock quipping, "I should have known you're not leavers."  They played four more songs including the biggest hit, the insensitively titled "Float On", before ending it for real with the bluegrass twang of "Styrofoam Boots," the last song on Lonesome Crowded West, the album many Modest Mouse fans would choose to save first if they saw their record collection blow away in 180 mile per hour winds.

If all those ghouls on the local news and Facebook who seem to live to remind us that the coming hurricane is a fucking apocalypse turn out to be right, then this was a worthy concert for us to go out on.