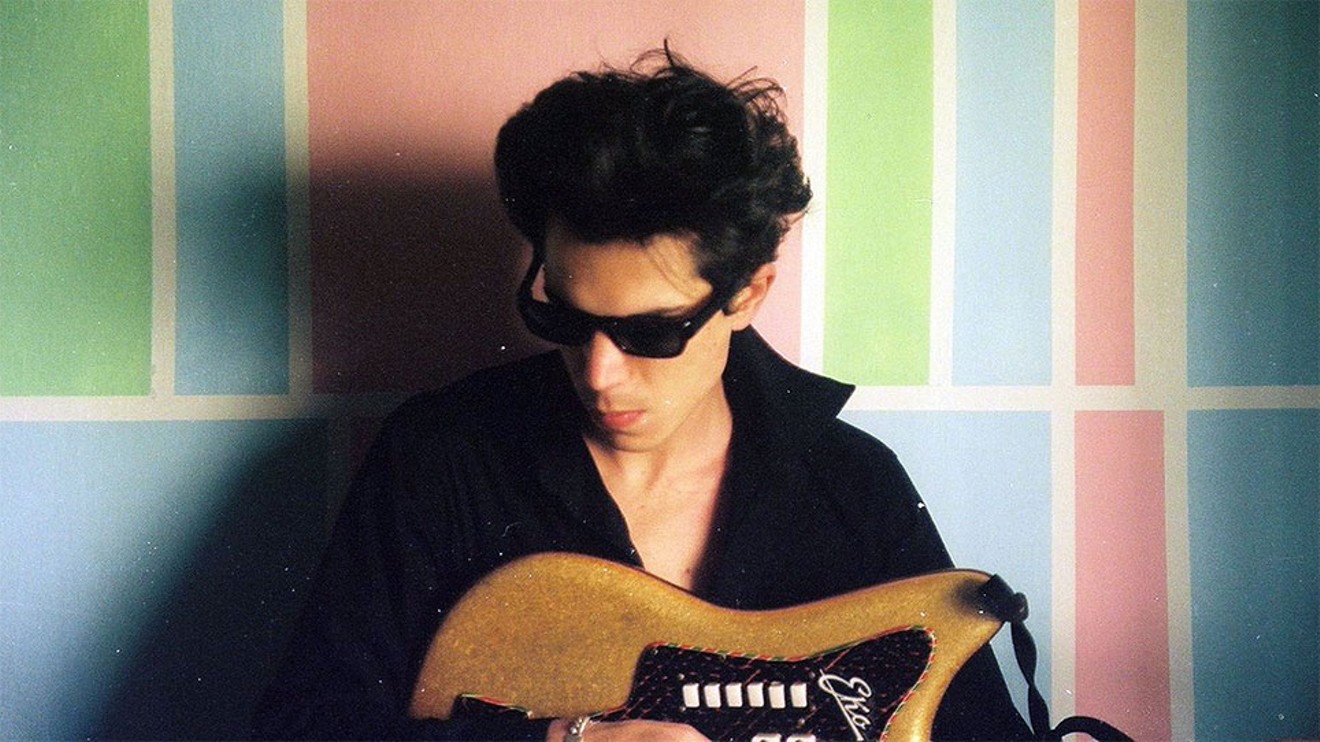 Charlie Megira Photo courtesy of the Miami Jewish Film Festival.
The most consistently fulfilling movie genre is the documentary on outsider musicians. If a filmmaker went to all that trouble to present an artist nobody's ever heard of, you know there's got to be a good story behind it.

But the best part of watching an outsider music documentary is the parting gift of a ton of new music that the viewer can dig up afterward. It was true for Daniel Johnston in The Devil and Daniel Johnston and for Rodriguez in Searching for Sugar Man.

Anyone who watches the Israeli documentary Tomorrow's Gone will certainly be adding Charlie Megira to their playlist.

The movie, which will stream for free as part of the Miami Jewish Film Festival, explores the life of the man born as Gabi Abudraham. From a young age, Abudraham was obsessed with Elvis and later found inspiration where he could get it — most remarkably, a Josh White album called Chain Gang Songs. The vinyl in the sleeve was broken, and this being the pre-internet age, Megira never got to hear the actual song, "Crying Who? Crying You." Still, he was struck by the album cover, which showed a from-the-knees-down image of a man wearing leg shackles and military boots, and by the lyrics. "Feel my black hell risin', raise me six-foot high/Don't care about nothin', a man is born to die."

Megira plays his own arrangement of the song, which is a completely different animal from the original.

"Charlie Megira was sort of an alien in many ways," says Boaz Goldberg, director of Tomorrow's Gone. "He was influenced by the Smiths, but he was so out of time in his looks and mind that it made him an alien. He built a persona."

Goldberg and Megira got to know one another amid the small '90's Tel Aviv rock scene.

"In Israel in the '80s, the music was club-oriented electro stuff. In the '90s, rock was back again," he says.

The duo became good friends, and even bandmates. At one point, Goldberg turned on a camera and began interviewing Megira. Those original six hours of conversation in Hebrew from the turn of the millennium become the foundation for Tomorrow's Gone.

"The film is fragmented. You don't see the usual talking heads," Goldberg explains. "I tried to build it with the Charlie Megira idea that every art form has its own breath and not to be conventional."
The movie chronicles Megira's early years, his struggle to make a living as a musician, and his untimely death in 2016 at the age of 44. One of Goldberg's favorite aspects of making the movie was showing the nine months Megira spent in America, mostly in Asheville, North Carolina, in 2015.

"I call that the long tour. You'd think someone from Israel wouldn't play such authentic American rock 'n' roll," he says. "Instead of doing what most Israelis do when they come to the U.S., selling ice to the Eskimos, Charlie sold gold. He came from the rural north of Israel, so he had that outsider look on society like you do in American blues."

The film also documents Megira's visit to Miami on June 26, 2015, when he performed at Gramps. Local musician and concert promoter Ricardo Guerrero remembers a sweet, quiet, funny guy who put on an amazing show in front of a packed room.

"I didn't know who he was. The show was passed on to me, but I immediately loved his music," Guerrero recalls. "No one else knew who he was either, but the show surprised everyone. His style was like the Cramps with a dark surf sound. He does this fake blood thing with capsules. They'd pop in his mouth, and the blood looked real. I had to ask if he was OK."

Guerrero remembers taking Megira for a "super Cuban breakfast" at Enriqueta's, where the singer asked him about Miami's Jewish population.

"He was asking how do people feel about Jews here. Are there issues? I was like, "Not at all. Here they're just another group of people,'" he says.

As a sign of gratitude for hosting him, Megira gave Guerrero a memento he has kept to this day.

"He left me a cool gift: a cutout of Elvis's eyes."

That anecdote fits right in with the movie about a unique individual who made some unique sounds that might now find a larger audience.

"Megira — in Hebrew, one of its meanings is a drawer," Goldberg says. "It was a joke, tongue-in-cheek, that he writes for the drawer."

And now the drawer has been flung open.

Tomorrow's Gone. Screening at the Miami Jewish Film Festival from Wednesday, April 14, through Thursday, April 29; miamijewishfilmfestival.org.
KEEP MIAMI NEW TIMES FREE... Since we started Miami New Times, it has been defined as the free, independent voice of Miami, and we'd like to keep it that way. With local media under siege, it's more important than ever for us to rally support behind funding our local journalism. You can help by participating in our "I Support" program, allowing us to keep offering readers access to our incisive coverage of local news, food and culture with no paywalls.
Make a one-time donation today for as little as $1.