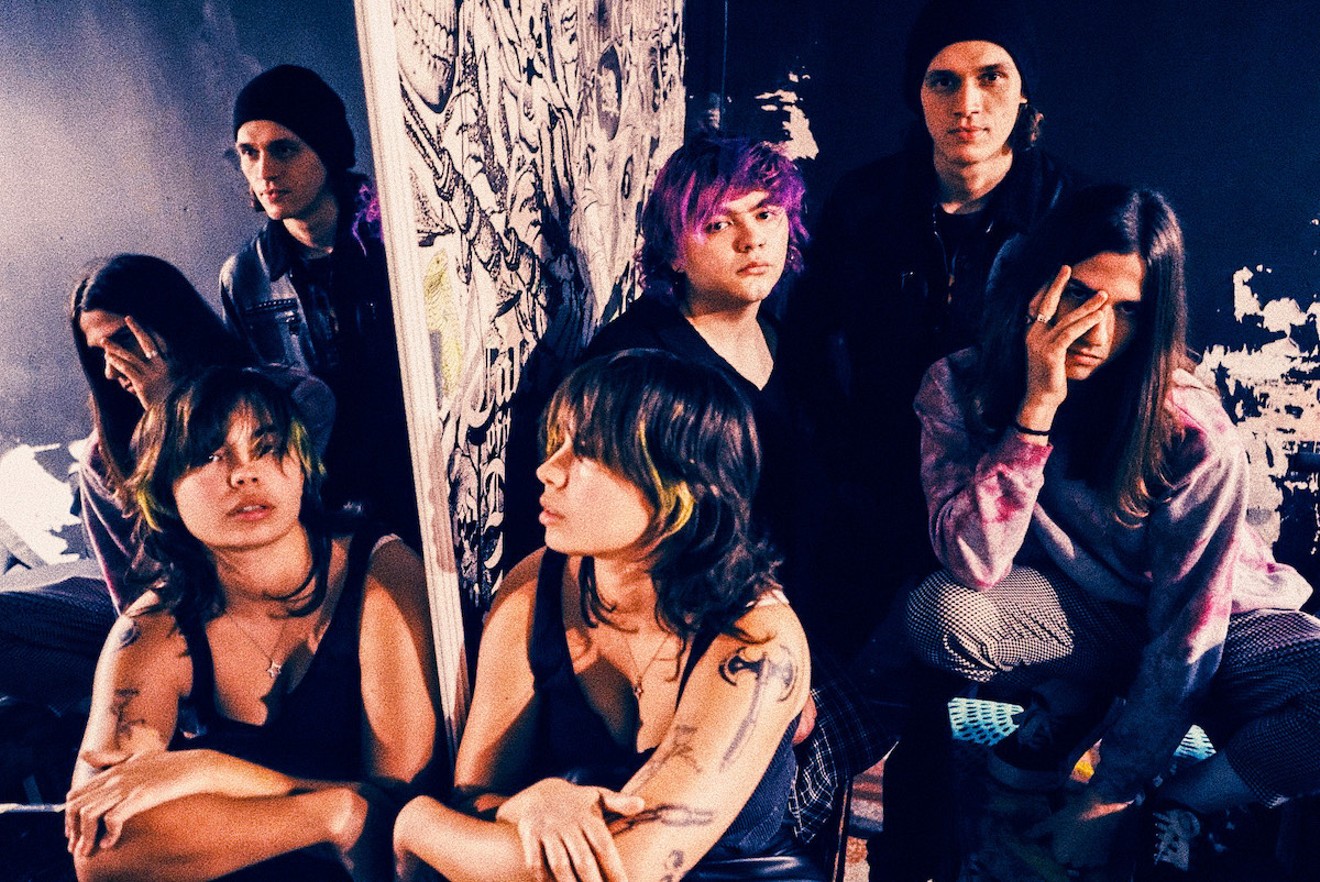 Palomino Blond, one of Miami's hardest-working bands Photo by Nicole Miller
It's not easy being a rock band in Miami.

This isn't Gainesville or Tallahassee, with cheap rent in punk houses and an endless stream of college freshmen who just heard Neutral Milk Hotel for the first time. Hell, even Orlando gives its smaller touring acts the option to drive north, south, east, or west to any of the strange cities sprinkled throughout the state.

Miami, however, is a cruel place to DIY. You'd be hard-pressed to find a beer for less than six bucks at any of our dive bars, let alone an affordable practice space. South Florida is the bane of many who grew up here, and while a lot of angst-ridden 20-somethings around the country might be singing the same tune, something about Miami just seems worse.

The members of Palomino Blond, one of this city's hardest-working bands, are no strangers to the torments Miami unleashes on its creative residents, but this hasn't stopped them from making noise.

In November 2021, the band released its debut album, ontheinside, an impressive collection of tracks complete with soaring guitar leads, syrupy melodies, and hysterical drum tracks. Following up on this release, the band has played a few local shows to devotees and newly converted fans alike. The most recent of these happened last Saturday night at Gramps, a setting the band and its audience seemed to feel equally invigorated by.

"According to our friends and management, the show at Gramps was one of our best," says Carli Acosta, vocalist and guitarist for Palomino Blond. "That makes me really happy."

"Maybe last night went so well because it was our first show since the new album came out. It was like an explosion, like the start of a new era," adds Kyle Fink, who also plays guitar and sings for the band. "The next morning, I was talking to my mom, and I told her I didn't want to sound like a little bitch, but I felt God at Gramps last night."

The Gramps show was supposed to be a homecoming for Palomino Blond, which had planned a two-week tour supporting the new record. But the tour didn't happen.

"We weren't feeling right about it, to begin with — you know, with COVID and everything. We kept going back and forth about whether to cancel, and we decided to go through with it since none of the venues were canceling." Fink says. "Then my grandma passed away — like, out of nowhere. The funeral would have been right in the middle of our tour. That was like the fat lady singing. I didn't feel good about going through with the shows. Then, coincidentally, I got COVID right before the tour would have even started. We would have had to drop the whole thing anyway."

Palomino Blond still plans to hit all the places they missed on the canceled tour. In the spring, the band will stop in several Florida cities on a short run of shows, and the summer will see the quintet playing all the out-of-state places it couldn't make this time around. Touring, of course, is a daunting process for a Miami-based band.

"Logistically, it's tough to be a band in Miami. I mean, it's literally ten hours just to drive out of Florida," Fink says. "As far as the music industry here goes, it's not connected to the national network of things, so there's nothing that's going to get you out of this city other than your own hustle and out-of-the-box thinking."

"When we played our first tour, our drummer at the time drove 17 hours just to get to one of our gigs in Texas," Acosta adds. "Getting out of this state is hell."

That's not to say that the Magic City is all bad for a new band. After all, if you can make it here, you can make it anywhere. Plus, the city provides those who cut their teeth here a wide range of artistic influence far beyond the scope of traditional indie rock.

"I think it's obvious, but Miami isn't much of a rock city," Acosta says. "We have a cool underground thing going, but this is mostly a Latin- and electronic-music city, and I love that. It contributes a lot to my musical interests. Like, I barely listen to guitar music anymore. So, when I do pick up a guitar, I end up creating something less influenced by what I'm hearing, and more like me channeling my own feelings into a song."
What's more, the strength of connections made in Miami's underground scene rival that of you and your sobrinos'. For one, Acosta's cousin, Mikey Arevalo, plays drums for the band and brings to the role more off-the-wall energy than Animal from the Muppets. Fink and Acosta met when they were both recruited to play in support of a local solo project. Then, instead of backing some other songwriter, they started exchanging their own musical ideas, hanging out daily on their college campus. Fink was only 16 when he met bassist Peter Allen. He'd booked Allen's old band, local legends Gouge Away, to play a house show in Little Haiti.

The album, ontheinside, is a testament not only to the perseverance of a band making it work in a difficult city but also to the culture of a new generation of artists who grew up here. When asked what each band member was listening to during the recording process of ontheinside, the responses were divergent. Indie darlings like Boy Harsher and Big Thief were mentioned in the same breath as mainstream pop staples like Robyn and Bleachers.

"It's funny, I clearly remember hearing all those things during the recording process, but when we were in the thick of it, I was mostly just listening to our songs," Acosta says. "I was listening to our stuff obsessively, practicing the songs over and over again. It made me hate them a little bit — like I couldn't wait to get to the next batch. After giving my ears a break for a while, though, I'm very pleased with those tracks and happy that they exist."

When you ask band members about their favorite songs on the record, "Magnolia" seems to reign supreme, with its floating melody and lyrics that gracefully toe the line between surreal and emotional. A close runner-up would be "Lovely," which seems to be a fan favorite as well, based on the response it garnered at last week's show. "Phoebe" is pleasantly reminiscent of some of the best Nirvana tracks, with its frantic guitar hook and humongous chorus. The song's music video, which premiered today, even looks a bit like the video for "Smells like Teen Spirit," with foggy Dutch-angle shots of the band strumming and singing through mops of hair.

"'Lovely' definitely has my favorite mix on the album, but my favorite to play live would have to be 'Magnolia,'" Fink says. "I think it's the most unique on the album. The leads I do on that song are some of my favorites that I’ve ever written. Of course, 'Phoebe' is like my baby. I've been playing around with it for years, so I have a super-strong connection to it."

This new album didn't happen overnight. It has been years in the making, and the attention to detail in its mixes and song structures prove it.

"For years, it felt we were running around like chickens with our heads cut off," Fink says. "We didn't have a clear focus of what we wanted the album to sound like. By the end of the recording process last January, we had a much clearer idea of how to piece these sounds together. ontheinside is like the sum of years of us trying to figure out who we were, and then the moment when we finally did."
KEEP MIAMI NEW TIMES FREE... Since we started Miami New Times, it has been defined as the free, independent voice of Miami, and we'd like to keep it that way. With local media under siege, it's more important than ever for us to rally support behind funding our local journalism. You can help by participating in our "I Support" program, allowing us to keep offering readers access to our incisive coverage of local news, food and culture with no paywalls.
Make a one-time donation today for as little as $1.