$not Leads the New Wave of SoundCloud Rap 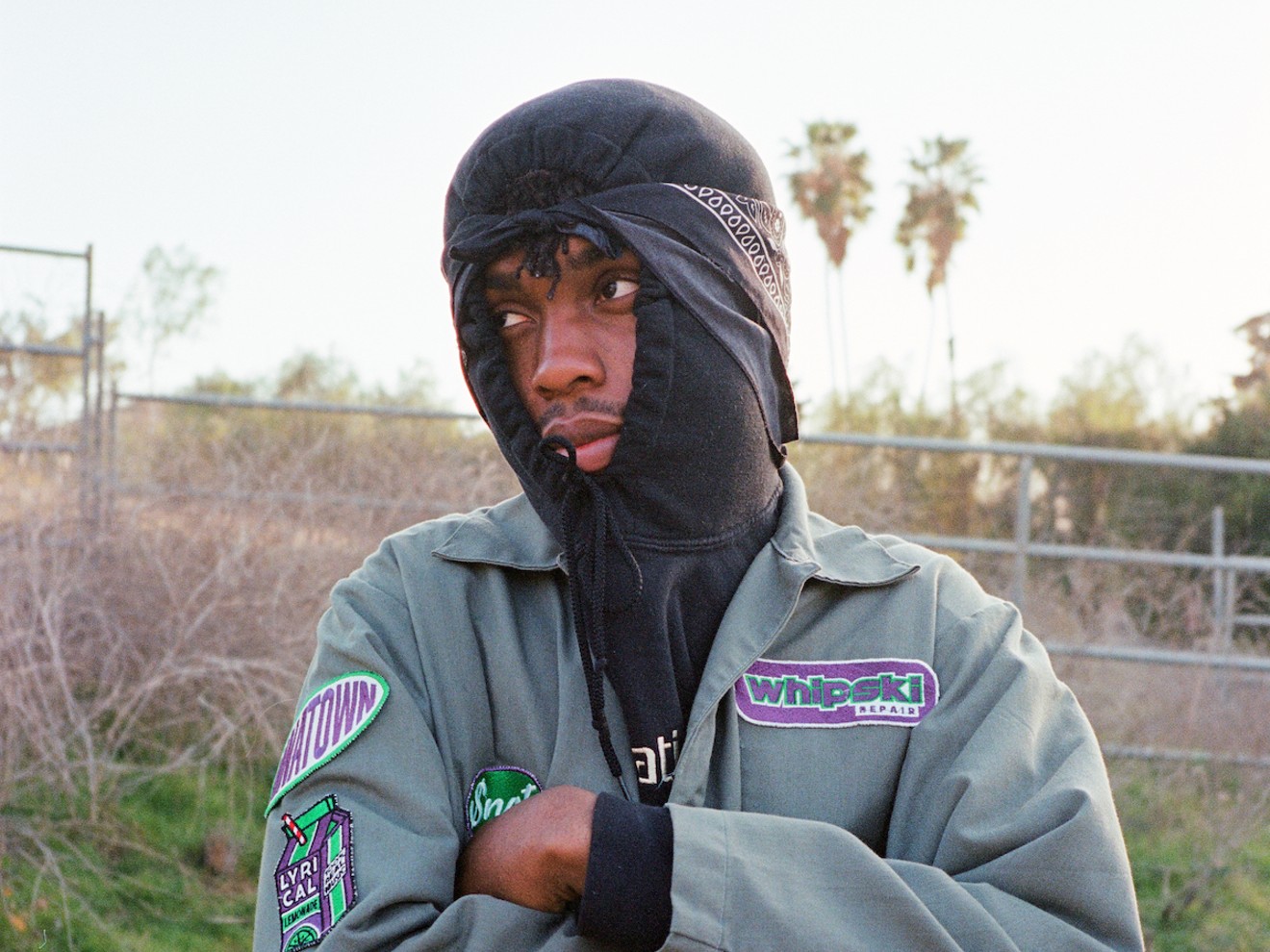 While 2020 nixed $not's touring plans, it didn't stop his musical output. Photo by Copes
It's a blisteringly hot day in April, but not inside the air-conditioned Bay 8 Studio in North Miami Beach where $not is rocking his signature hoodie paired with black pants — both of which appear iridescent thanks to the purple-neon hue emitting from the lights above. But instead of wearing the hood cinched tightly around his face the way he usually does, New Times caught the rapper in rare form, with his dreads and facial hair clearly visible.

The New York-born Lake Worth resident usually doesn't mind a horde of people smoking weed and drinking around him while he's recording. Yet, during this late-afternoon session, $not is accompanied only by a sound engineer and one close friend.

At Bay 8, he recorded songs like “Life," which appear on his most recent album, Beautiful Havoc, the latest collection of songs to release via 300 Entertainment, the label where $not landed a distribution deal in 2019.

“People, they mess with the music,” $not says about the album. “They think it's versatile. That's how I wanted it. When people hear it, they say, 'OK, this man's doing some different things.' It's a clean, hard-cut album.”

Born Edy Edouard, $not began experimenting with rapping alongside a high-school friend, recording himself on a cheap USB microphone. In 2017, he started uploading cuts like "Stamina" and "Gucci" on SoundCloud, where listeners encountered whispered flows and cadences gliding effortlessly over heavy trap beats that sampled everything from classical instruments to TV shows like The X-Files.

"I never really be singing on stage, but some of these new songs is me singing.”

Over the years, $not has evolved from an experimental ASMR-type artist to a distinctive lyricist who's destined to lead the new wave of the SoundCloud era.

In 2019, two years after launching his career, $not, who took his stage name from his original Instagram handle, performed live for the first time, at Rolling Loud Miami. Before he knew it, he was getting looks from Billie Eilish and hearing his music on TV shows like HBO’s Euphoria.

COVID-19 may have killed his 2020 touring plans, but it didn’t slow his musical output. And over the past five years, the 23-year-old’s music has evolved significantly — so much so that he's having trouble coming up with a setlist for his first official tour.

"I'm just thinking about what song I'm going to perform, because a year ago I wasn't making what I'm making now,” $not tells New Times. “Like how am I going to perform these types of songs? Because I know how to perform my old songs, but these are completely new, you know? So when I'm on the stage, I'm going to be singing. I never really be singing on stage, but some of these new songs is me singing.”

Regardless of what songs he chooses, $not will take the stage as a rapper on the rise.
His four-date Florida Whipski Tour is set to kick off in Jacksonville on May 13 and stop on his home turf, for a show at the Kelsey Theater in Palm Beach County on May 15. The "Sangria" spitta is also scheduled to return to Rolling Loud Miami in July.

Before he hits the road, $not hints that he might drop something new. Prior to his studio session, the rapper had posted a photo dump on his Instagram featuring new images from a Scarface-themed shoot for an upcoming single.

"That was for my new song 'Red,'" he explains. “I haven't dropped it yet. It's more of a solo record. I want people to know I do my own thing."

The hoodied rapper had been in his own lane sonically and visually for some time before meeting up with Cole Bennett, the music video director and founder of Lyrical Lemonade. Since connecting with Bennett for his “Revenge” video in 2020, $not’s creativity has seemed to skyrocket. His new single, "Whipski" featuring Lil Skies and produced by Internet Money’s Taz Taylor, Nash Beats, and Cxdy, is reaching mainstream heights that are “completely left field” for him.

The video for “Whipski” finds $not and Skies taking a break from their jobs as mechanics. The pair drives off in a Great Value Mystery Machine-type van that eventually breaks down, morphs into a black two-door coupe, then explodes thanks to an insane stranger with a flamethrower. If you think that’s crazy, you aren’t ready for what happens after the rappers get picked up by some sexy purple aliens.

“Cole came up with all that alien stuff,” $not says. “I read the treatment and I didn't even know. I was like, ‘Aliens? How does this fit in?’ Me, I was just thinking like some girls in a car. It's called ‘Whipski.’ Going down to the city, drinking Henny. That's literally what I was thinking, and he thought about aliens. I'm like 'OK, I'm down.'”

“Whipski” and the unreleased “Red” may just be one-off bangers for now — $not has been teasing a lot of new material on his social-media channels lately. But there’s a chance the tracks may be part of something bigger.

“I could put them on my project,” $not says. “I don't even know. I just be going with the flow. This is just a flow type of thing. If I mess with it, if I think it deserves to go on my next album or project, then I'll put it on there.”

$not. 8 p.m. Saturday, May 15, at the Kelsey Theater, 700 Park Ave., Lake Park; 561-328-7481; lakeparkblackbox.com. Tickets cost $20 to $80 via bocablackbox.showare.com.
KEEP MIAMI NEW TIMES FREE... Since we started Miami New Times, it has been defined as the free, independent voice of Miami, and we'd like to keep it that way. With local media under siege, it's more important than ever for us to rally support behind funding our local journalism. You can help by participating in our "I Support" program, allowing us to keep offering readers access to our incisive coverage of local news, food and culture with no paywalls.
Make a one-time donation today for as little as $1.