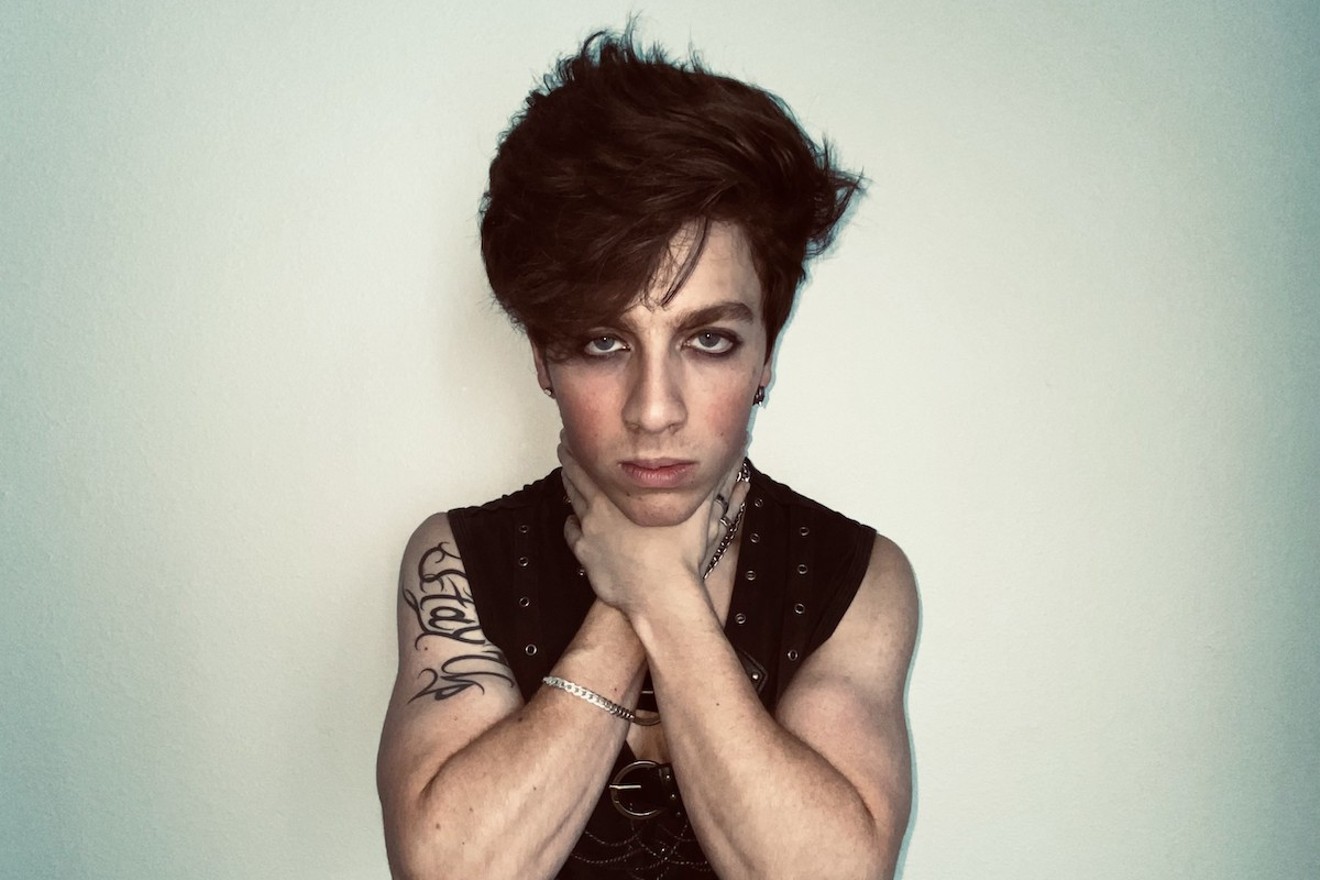 TX2 is championing emo and pop-punk on TikTok. Photo by Olive Thompson
Emo music's poignant lyrics and supercharged guitar strumming of pop-punk undoubtedly elicit 2000s nostalgia of listening to the Used on an iPod and changing your Myspace backgrounds. But the jaundiced lyrics and distorted guitar progression attracted confused and often mentally isolated listeners toward a community that embraced togetherness (and moshing).

As with any style of music that brings a wince of nostalgia, there is a younger generation wanting to revive the sound — often with a few contemporary twists. Twenty-two-year-old Miami-based musician TX2 (AKA Evan Thomas) hopes to lead that front.

When he was 8 years old, Thomas purchased his first album, Green Day's American Idiot, followed by My Chemical Romance's The Black Parade. In the music, Thomas found an escape from childhood torment at the hands of school bullies.

"All of that led me into darker music where I just appreciated darker things," he tells New Times. "I struggled with my mental health along the way — I still am. But I have a grip on myself because of this music."

Thomas grew up in Colorado, where, like every middle schooler, he played in a garage band. He described the band as developing a small name in a small town — coffee shops, house parties, and managing to play a set during a Colorado Eagles hockey game. After graduating high school, he moved to Miami in 2018 to study music business at the University of Miami.

An avid fan of hip-hop, Thomas auditioned as a rapper for UM's Frost School of Music. The audition went so well, the school awarded him a full scholarship.

"I realized rapping is just drumming with words," he says. "So once I figured the percussive and rhythmic elements, I got super into it. In high school, I was strictly making rap music with a tad of punk rock. When the time for college came, and I was finding myself, I was like, You know what, I grew up in the emo scene, and I need to bring that back to become an authentic artist."

Thomas' music blends genres that are challenging to emulsify into the perfect pop-punk song: The hardboiled progressions of punk, hip-hop's poetic prose, and the emotional vulnerability of emo lyrics.

"I think pop-punk as a whole has a huge revival, and emo is a part of that subculture," he says.

Thomas is definitely not wrong. Machine Gun Kelly's fifth studio album, Tickets to My Downfall, saw the musician move away from hip-hop to a decisively pop-punk sound, while Olivia Rodrigo's breakthrough album, Sour, owes a lot to the genre.
In Thomas' case, his poignant lyrics and full-throttle punk overtures bring recollections of circa 2004 — even if his Gen Z status raises skepticism. But like any crafty Zoomer, Thomas uses his social-media prowess to his benefit. His single "Pull the Plug" — which has been streamed over 300,000 times on Spotify — went viral on TikTok.

"I posted 'Pull The Plug' on TikTok and the teaser got like 500,000 views, and people started using the song in their videos," he says. "The song is actually about my struggles with mental health. I think many people related. There's not only power in music, but there's power when you start getting a platform."

Thomas has over 200,000 followers on TikTok with nine million views. While he uses the platform for typical TikTok shenanigans, his channel is dedicated to promoting mental health. He also runs a community on Discord called "The X Movement," where people can openly chat about their mental health in a virtual safe space.

"There was a point in my life where I didn't feel like I had anyone," Thomas explains. "I didn't want anyone to go into that place. There's a venting section on Discord, and basically, everyone starts talking about how they're struggling and realizes they're not alone. The most dangerous thing is when they feel alone and think they have no one. I feel like that's my impact and how I can give back to the world for giving me a platform."

Thomas is just one friendly voice in an industry more cognitively aware of mental health. According to a study, Logic's song, "1-800-273-8255," named for the National Suicide Prevention Lifeline phone number, may have prevented suicides.

Looking ahead, TX2 is looking forward to a productive year. He released a music video for his latest song, "No Place Like Home," which was shot in Miami.

"It's ironically about my hometown in Colorado, but I wanted to shoot it in Miami," he says. "It's about how I felt trapped in my hometown."

Listeners can expect his next single, "Nail in the Coffin," to be out in early February. "I experienced a relationship that ended, and I thought, Dude, this is like a nail in the coffin — the phrase rang with me."

Living in a city dominated by electronic music, reggaeton, and hip-hop leaves little room for bonafide punk venues. While Thomas has played venues like Churchill's Pub in Little Haiti and Naomi's Garden in Liberty City, he's still eager to explore the hidden world of the city's punk scene, which is often overshadowed by the electronic and reggaeton offerings.

"There is a punk scene, and it's my job to discover it on my own," he says. "It's a scene I love and want to be a part of it in every way possible"

In the meantime, Thomas is set to play during the Black Market Fashion Show at Revolution Live on February 5 before flying back to Colorado next month to open for emo rapper Call Me Karizma.

"The fact that I was graced with this luck and the power of TikTok is the sign I needed to show that this is what I want to do and need to do," Thomas says. "Wherever it takes me, I'm going, and whatever it asks me, I'm doing it."
KEEP MIAMI NEW TIMES FREE... Since we started Miami New Times, it has been defined as the free, independent voice of Miami, and we'd like to keep it that way. With local media under siege, it's more important than ever for us to rally support behind funding our local journalism. You can help by participating in our "I Support" program, allowing us to keep offering readers access to our incisive coverage of local news, food and culture with no paywalls.
Make a one-time donation today for as little as $1.