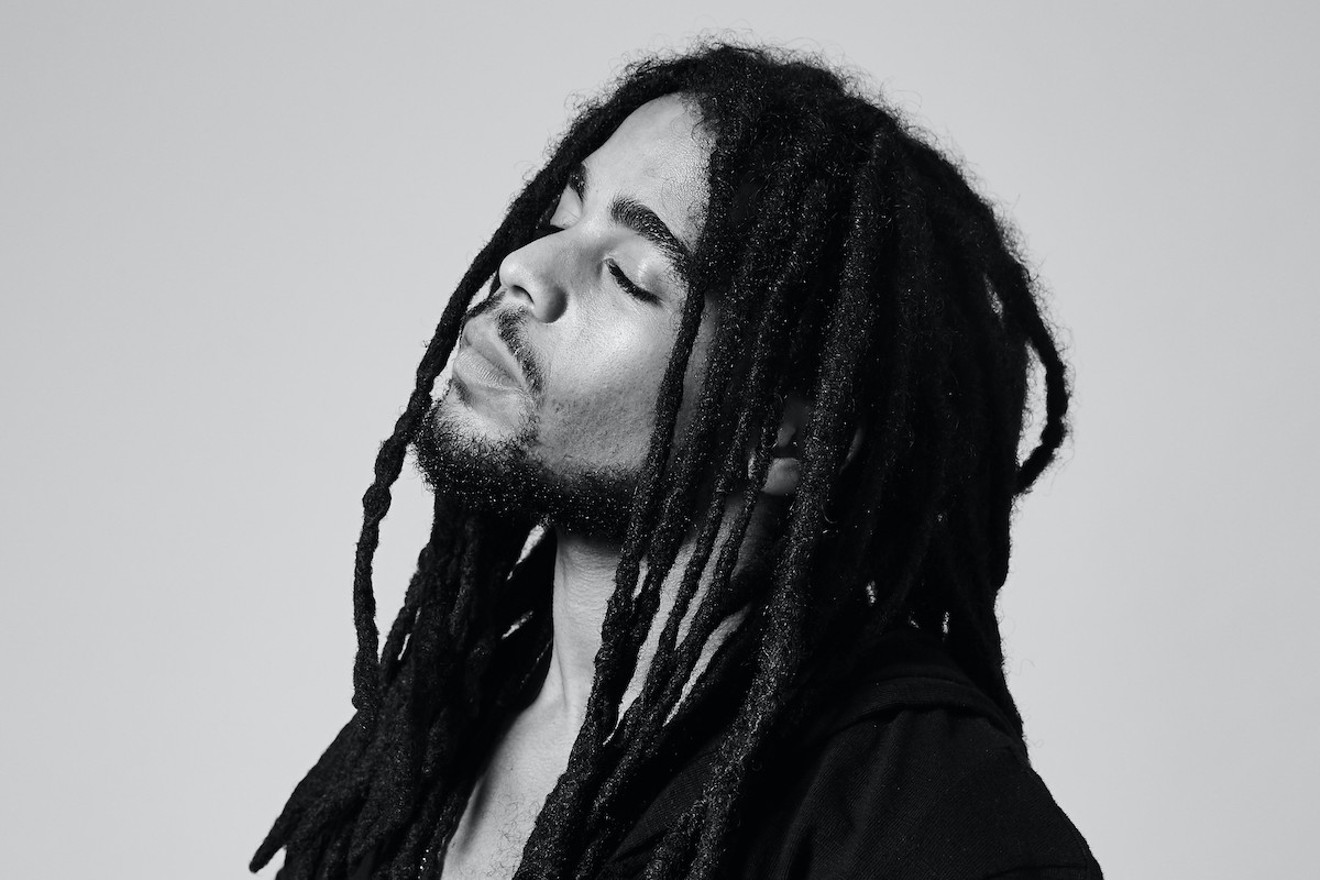 Skip Marley encapsulates family legacy on his latest project. Photo by Piper Ferguson
Some see Skip Marley as the reincarnation of his grandfather, Jamaican reggae titan Bob Marley. Because of his similar look and sound, Skip doesn't deny the resemblance — in fact, he relishes it.

"It's definitely just in me," he says with a smirk.

At 24, the third-generation scion personifies the Marleys' dynasty in his music and genetics.

On a Wednesday morning, Skip emerges in a video chat embodying the Marley clan emblems and its Rastafarian patriarch: thick dreadlocks liberally draping his shoulders, a cool-confident disposition, and a calmness infused in his patois.

As tempting as it is to only compare Skip's debut to his predecessors, those measurements would create a myopic perspective of how he's evolving his legacy. After releasing his debut single, "Cry to Me," in 2015 under his family's Tuff Gong label, he was tapped by pop chanteuse Katy Perry for her 2017 single "Chained to the Rhythm." The track peaked at number four on the Billboard Hot 100 and saw the pair perform at the Grammys and iHeartRadio Music Awards. That same year, he signed to Island Records, the same label that catapulted his grandfather into an icon, and released the Ilya-produced track "Lions," the call-to-action soundtrack for the Pepsi short film, Live for Now.

"To me, it's just a blessing to be a part of the music and the spirit of it," he says about his previous work. "I'm just glad to get it to the people. That's what really matters."
Insolated within reggae's most prolific clan, Skip was born in Jamaica but moved to Miami with his family at a young age, splitting most of his childhood between school and touring with his mom, Cedella Marley. She sang with the Grammy Award-winning Melody Makers, a Marley family reggae group led by Ziggy Marley. She also played an instrumental role in shaping Skip's songwriting techniques.

"First song I write, me go to my mother, and she say, 'Write love songs,'" he recalls with a laugh. "She's one of the oldest, so she's gone through it all, and she understand that discipline and level to where them take the craft to perfection."

It wasn't until 2005, when Skip bore witness to his grandfather's impact during a posthumous tribute at an Africa Unite concert, that he resolved to follow in the reggae legend's footsteps and become a musician.

A few years later, a spontaneous opportunity presented itself when his uncle, Stephen Marley, told him during a soundcheck, "You're going to sing tonight." Later, when the crowd roared for an encore from Stephen, it was instead introduced to a then-teenage Skip, a novice to the stage but not to the classic reggae songs that endeared millions to his grandfather's music. Singing "One Love" in front of blinding stage lights, his predestined future became clear.

"Right then, I was like, 'Yeah, I just want the music,'" he says.
Last month, he released his debut, a seven-track EP, Higher Place, whose songs encapsulate the foundation of reggae. That's evident on songs like "That's Not True," featuring his uncle, Damian Marley, and "Higher Place," an ode to his grandfather's principles that interpolates his voice as momentum for the anthem.

But it's the breakout single, "Slow Down," featuring R&B polymath H.E.R, that proves Skip Marley is primed for stardom. After its release last November, the sultry R&B-meets-reggae track climbed to the number-one spot on the Billboard Adult R&B chart, making Skip the first Jamaican-born artist to top that chart. In May, the track also peaked in the top 15 on the Billboard R&B/Hip-Hop Airplay chart — the first time a Jamaican artist topped that chart since Sean Paul and Keyshia Cole's "When You Gonna Give It Up to Me" nearly 15 years ago. And with more than 44 million streams globally, the song was the quickest streamed in the history of the Marley clan.

"I'm thankful to H.E.R for being a part of it," Skip says. "To me, it's not about the charting. I'm just glad the people are feeling the music and loving the music."

With each track, Skip pairs his family's musical guidance with his own flair for pop, EDM, R&B, and hip-hop. And as he prepares to release a full-length project, he says his music is the extension of his lineage.

"Skip Marley just a rasta youth who sing from the heart," he says, relaxing into his chair. "I try to unify the people. It's simple. I just try to uplift the people and the whole consciousness."
KEEP MIAMI NEW TIMES FREE... Since we started Miami New Times, it has been defined as the free, independent voice of Miami, and we'd like to keep it that way. With local media under siege, it's more important than ever for us to rally support behind funding our local journalism. You can help by participating in our "I Support" program, allowing us to keep offering readers access to our incisive coverage of local news, food and culture with no paywalls.
Make a one-time donation today for as little as $1.