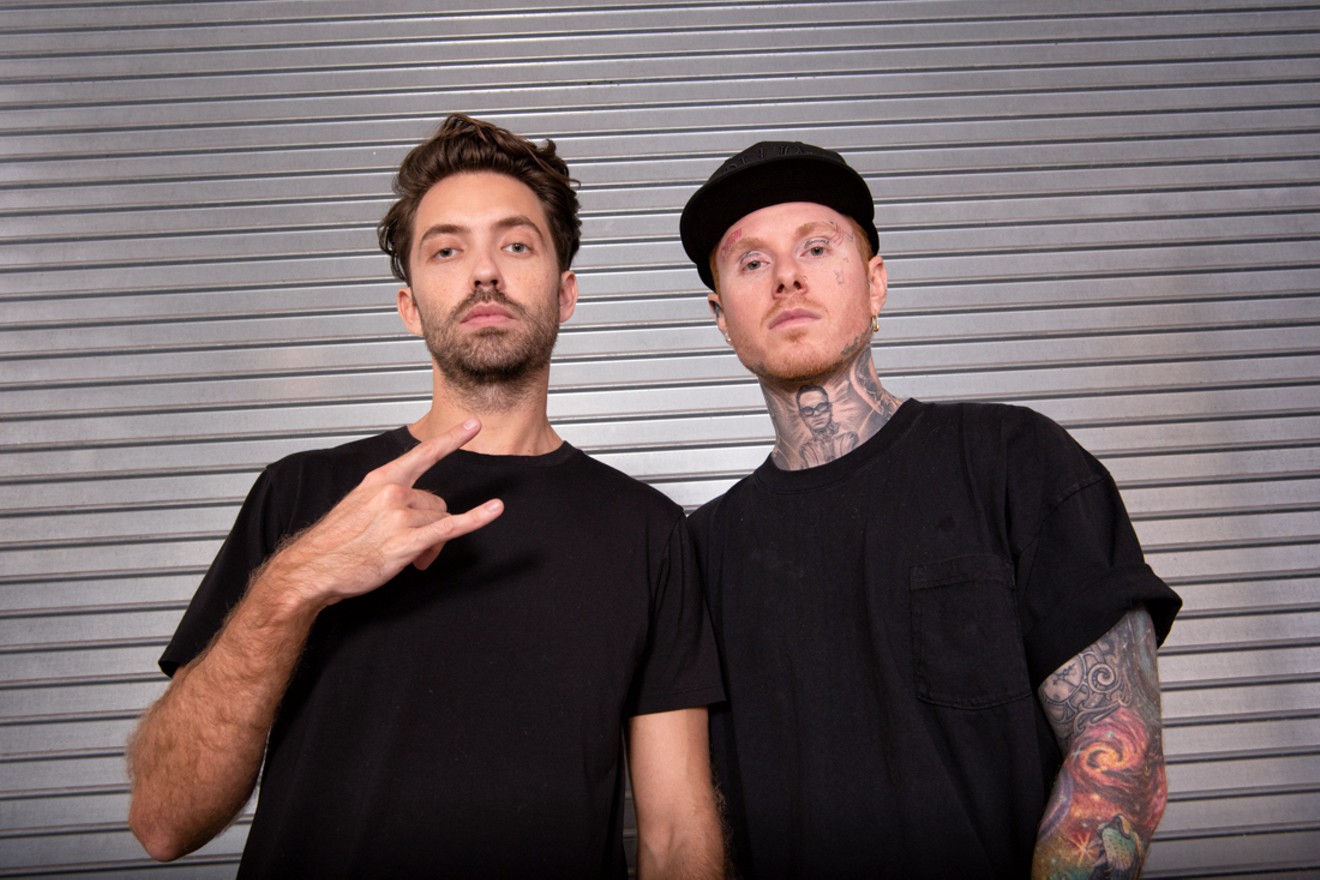 Rolling Loud founders Tariq Cherif (left) and Matt Zingler Photo by Michele Eve Sandberg
Mesmerized by its rapid growth, the New York Times called it "a playground for the young." Billboard proclaimed it "the be-all of hip-hop festivals." Pollstar assured its readers that "its hip-hop tastemaking status is no fluke."

"It" is Miami-based Rolling Loud, the homegrown music festival that started as a single-day event in Wynwood in 2015 and within five years has grown into one of the biggest hip-hop brands in the world. Locally, it has surpassed rival events Ultra and III Points in stature and rivals prestige festivals like Coachella. Last year's festival at Hard Rock Stadium attracted more than 210,000 attendees over three days, while two-day editions in Los Angeles and New York counted 120,000 and 100,000 fans, respectively.

Rolling Loud's success is not an accident.

Founders Tariq Cherif and Matt Zingler have been able to tap into the hip-hop underground and book relative unknowns destined to become global superstars. Travis Scott, Megan Thee Stallion, Lil Uzi Vert, 21 Savage, and Future all played the festival before becoming household names. Rolling Loud's winning formula essentially boils down to one big case of FOMO — if you don't go, you won't be able to claim you saw that act "before they were big."

The festival was set to return earlier this year to Hard Rock Stadium, but the pandemic forced it to reschedule — a date has been tentatively set for February 12-14, 2021 — with the promise that the same lineup, headlined by A$AP Rocky, Travis Scott, and Post Malone, will perform.

Rolling Loud's winning formula essentially boils down to one big case of FOMO.

Five years ago, Cherif and Zingler were booking concerts around the state as Dope Entertainment when they noticed that something was missing from Florida's live-music landscape.

"We were already booking all these [SoundCloud rappers] month after month in Florida," Cherif recalls. "We were like, 'Dude, why are there these other genre-specific festivals, like Ultra and Electric Daisy Carnival with EDM, and Stagecoach for country, and how come there aren't any for hip-hop?'"

Of course, there was Rock the Bells, the annual hip-hop festival that started in Southern California and ran from 2004 to 2013. Cherif felt the event was wildly inconsistent (the last year the touring festival made its way to Miami was 2008) and ignored the more alternative and experimental forms of the genre that were incubating in places like South Florida. Local acts like XXXtentacion, SpaceGhostPurrp, Kodak Black, Lil Pump, and Denzel Curry were already bubbling up from the underground, and Miami seemed like a natural place to launch a festival dedicated to the newer and more forward-thinking styles of rap. 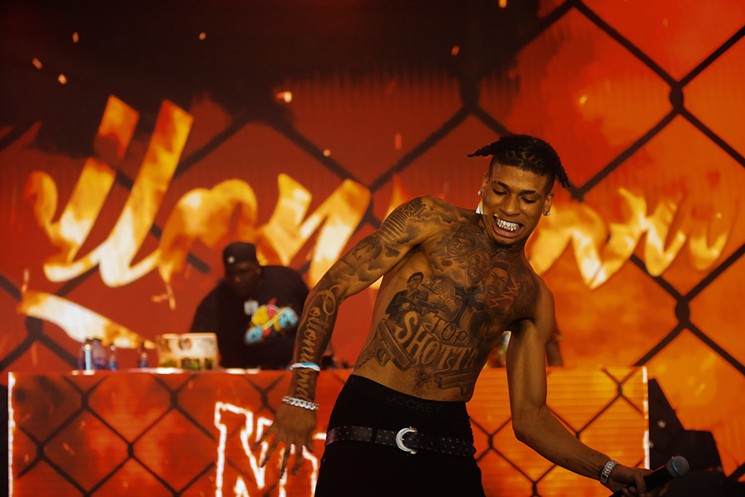 NLE Choppa performing during the Loud Stream on September 13.
Photo by Mickey Pierre-Louis/@itchyeyephotos
While the experimental sound coming from South Florida was often referred to as "SoundCloud rap," the name really has become as meaningless as EDM is to dance music — often being used as a catchall term. SoundCloud rap, sometimes referred to as "mumble rap" or "emo rap," has a negative connotation as not being "real rap music." But it's also, undeniably, a reflection of the many influences from which it takes cues — punk, grunge, lo-fi, and, of course, emo.

Cherif and Zingler were able to capitalize on the subgenre's growing popularity and rabid fanbase.

In 2015, the partners announced Rolling Loud at Soho Studios in Wynwood, with a lineup that featured Schoolboy Q, Juicy J, A$AP Ferg, and Action Bronson. Despite some logistical issues — the warehouse flooded after a sudden rainstorm — Cherif and Zingler knew they were on to something. They returned the following year at the much larger Mana Wynwood space with Ty Dolla $ign, Young Thug, and Future as headliners.

After a stint at Bayfront Park in 2017, the festival settled into its current home at Hard Rock Stadium, where it grew larger in size and stature in 2018 and 2019. At the same time, the festival expanded to Los Angeles, Oakland, New York City, and Sydney. Next year, it's scheduled to make its European debut with Rolling Loud Portugal.

"We were the first to book the Kid Laroi at our Australia show, and now look at him: massive."

The festival's international expansion is intentional — Cherif and Zingler recognize hip-hop's global appeal and are interested in connecting with emerging scenes in other countries.

"We were the first to book the Kid Laroi at our Australia show, and now look at him: massive," Cherif boasts.

Zingler notes that the international shows — which are produced with help from local partners who facilitate the logistics — allow Rolling Loud to engage with local talent, which truly expands hip-hop's reach.

"For our show in Portugal, we try to bring out artists that are based in Europe or local Portuguese artists. We will always show love to where we're at," Zingler explains. "And we definitely tailor the lineup according to what we feel like [the local audience] would want — there are different acts that maybe have a larger draw there."

In August, the festival announced it was partnering with Twitch. The streaming platform had mostly been known as a place for gamers to broadcast their gameplay, but after the pandemic descended in March, the service saw an influx of other creatives looking to remain connected to the outside world. Twitch's union with Rolling Loud seemed like a natural evolution, given what had been unfolding over the past few months.

The announcement brought the promise of a steady output of content by Rolling Loud on the platform, but the biggest news was that the festival would premiere a streaming music event series, dubbed Loud Stream, on September 12, with a lineup that featured Swae Lee, Ski Mask the Slump Gob, Polo G, and NLE Choppa, among others. 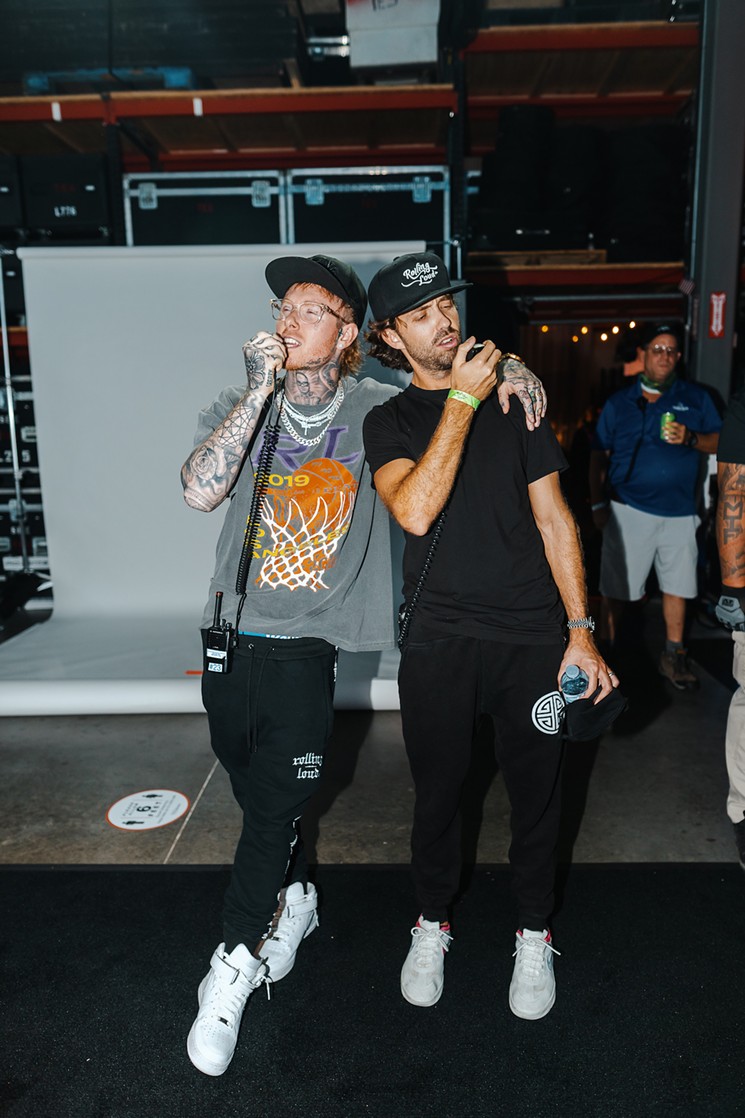 Cherif and Zingler managed to pull off the event, which originated from an undisclosed studio in Miami, with only three weeks of preparation.

"There was a lot of coordination with talent, because a lot of them didn't know what to expect," Zingler says. "A lot of people are doing livestreams and prerecorded sets, and a lot of them don't have set design or proper audio or visuals or cameras. I think for us it was just executing the best performance area and the best video team so we could capture the best content."

Zingler says the biggest challenge was figuring out how to involve the audience in the broadcast so that it didn't feel like they were just watching TV.

Because Rolling Loud had been doing livestreams at its festivals before the shutdown, the infrastructure was already in place. The trick was to implement COVID-19 safety parameters for the safety of the acts and staff.

"We were rotating the artists in and out, so there is only one artist in each area at any one time," Cherif says.

Loud Stream is set to return over Halloween weekend, on October 30-31, from the same undisclosed location (a safety measure to keep fans away) with Gunna, Trippie Redd, Lil Pump, Young Dolph, and Iann Dior leading the bill.

For Cherif and Zingler, the second event presents an opportunity to improve on the first stream.

"I'm excited about the whole Halloween theme," Cherif says. "We are going to be doing some really cool activations and dressing up the whole place like a haunted house/house of horrors-type thing. And the fans at home are going to get the chance to participate with us in a costume contest, which has a cash prize as well as a ticket prize for a future Rolling Loud of their choice."

Do the partners anticipate that the second Loud Stream can beat its predecessor's viewership mark?

"I think that we will," Zingler predicts. "I think we will always do more streams than we did the time before. I think that it being Halloween and it being a longer promotion time, it would only make sense that we draw more viewership."

Loud Stream. With Gunna, Trippie Redd, Lil Pump, Young Dolph, and others. 6 p.m. Friday, October 30, and Saturday, October 31; rollingloud.com. Stream via twitch.tv/rollingloud.
KEEP MIAMI NEW TIMES FREE... Since we started Miami New Times, it has been defined as the free, independent voice of Miami, and we'd like to keep it that way. With local media under siege, it's more important than ever for us to rally support behind funding our local journalism. You can help by participating in our "I Support" program, allowing us to keep offering readers access to our incisive coverage of local news, food and culture with no paywalls.
Make a one-time donation today for as little as $1.