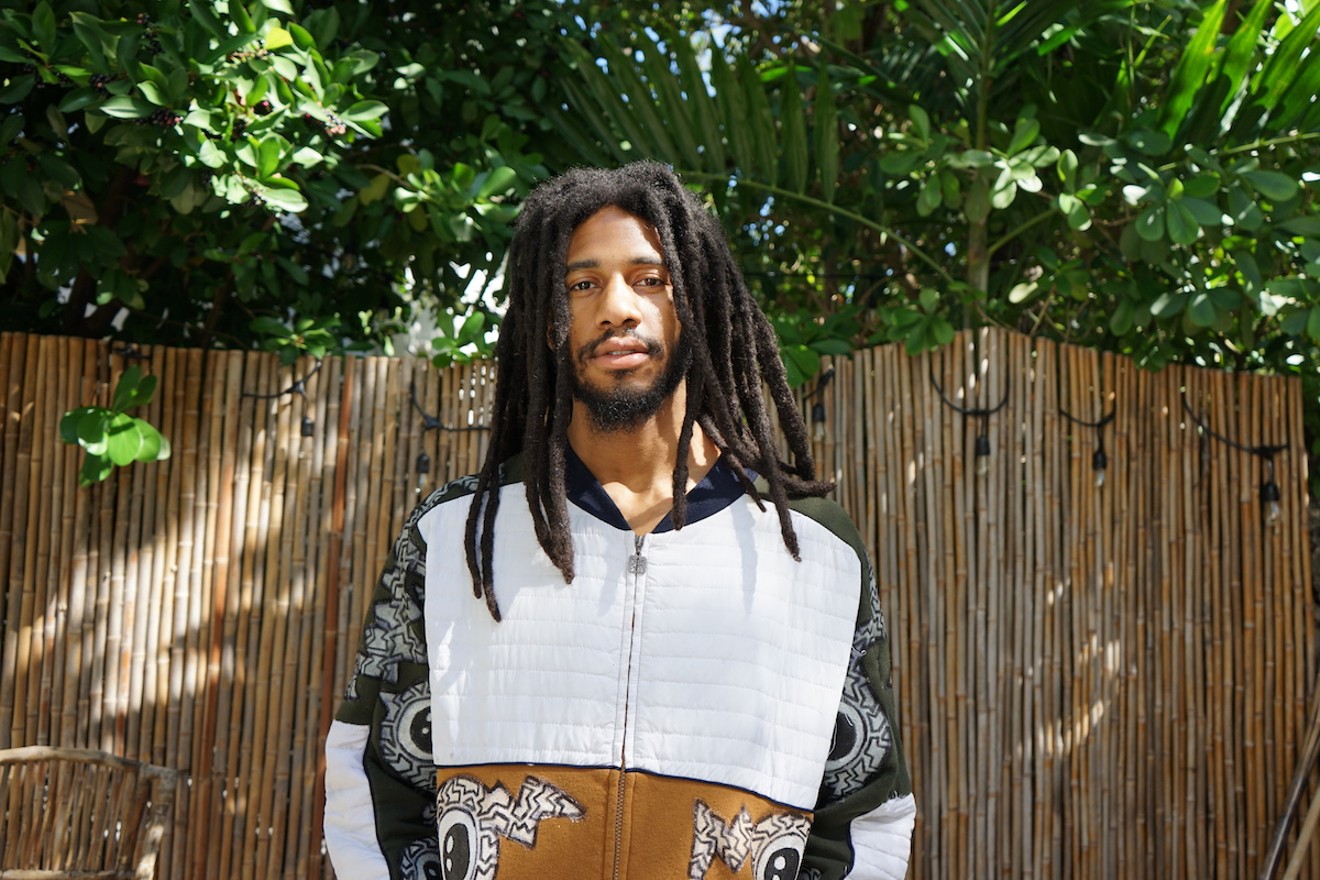 Lofty305 Photo by Makada Duncanson
“It's like if rap is kung fu, then my shit is tai chi,” Lofty305 says.

Seeking balance during the pandemic, the former Raider Klan and Metro Zu member hasn’t slowed his creative output — 2020 has proven to be an extremely productive year for the rapper and producer. As a producer, he released beat tapes Sentient Gear Vol. 1 and Vol. 2 this year, featuring sounds from varying worlds — from pulsating bass with trap-style hi-hats to natural elements like birds and chimes.

Released last month, Sentient Gear Vol. 2's production is shrouded in a dark, hypnotic fog that's reminiscent of other lo-fi producers on SoundCloud — except Lofty305 has a very methodical approach. The glitchy nature of his work is directly influenced by his gaming obsession.

“I've been sampling video games since I started making beats with heavy video-game influence," Lofty305 explains. "Growing up, we’d be playing games — playing N64 and stuff like that — and recording ourselves at the same time.”

“I’ve always been into gaming since I was a little kid. I always wanted to make video games," he says. "I got really into making games about three years ago. My first game was a little 2D beat-'em-up game like Streets of Rage. It was all hand-drawn on paper, and I just took pictures with my cell phone and loaded them into Photoshop.”

Lofty305 · Sentient Gear, Vol. 2
Lofty305's wants Underland Ambush to become a vehicle to highlight other artists. To that end, he has put out a call to producers and musicians to submit music for the game, with the intention of creating an on-screen playlist so players can easily identify what they're hearing.

He's also ready to showcase his own talents. On his recently released Datalog 01 EP, Lofty305's production is abetted by his vocal work.

He refers to the project as a diary of sorts.

“With COVID, I’ve been spending a lot of time alone. I’ve had mad time to think and stuff," he says. "It’s about telling my thoughts and emotions. It’s the soft sciences. It’s about the emotional software of the human being.”

Datalog 01 is nine minutes of haze and synth-funk with echoing vocals that tumble from Lofty’s Gameboy mind. At times emotional and in other moments solemn, his tone as a lyricist reflects the bedroom beatmaker’s own quirky style, reminiscent of acts like Twelve’Len and Spooky Black.

Lofty will tell you his strongest source of inspiration is Madvillainy, the only studio album released by Madlib and MF Doom's project, Madvillain.

Lofty305 · Datalog 01
And you can hear Madlib's influence in Datalog 01's production style, the crackle and muffled bass crunching through on tracks like "Got Love," on which Lofty305's vocal floats along, calm and collected, on the beat.

“Do you got love/I’m tryna to convince myself that it was not love/Heavy breathing in the drops came acid rain/Let it overflow the mask of pain on my face/I got a lot of shit to do today I got love/But I can’t have no feelings in the way the time came.”

The notion that Lofty305's "shit is tai chi" shows up throughout the project. There's a fluid nature to his approach to songwriting: Words meld into one another with distorted vocals that blend into the music's emotional peaks and valleys.

When asked whether rhyming or beat-making comes first, his response: It’s all music.

What with Underland Ambush's imminent release and attendant promotional push, Lofty305 is fully occupied, but he's taking it in stride. Although he’s no longer affiliated with Metro Zu or Raider Klan, he still counts on a network he can reach out to when he needs help, but for now he's focused on handling as much of the workload as he can on his own.

“I’m just going to focus on working by myself at the moment," he says. "I’m not opposed to working with other people to make shit, but I think where I’m at right now, I can handle the work, and then once it gets to the point where I can’t handle it, then I’ll add more people.”
KEEP MIAMI NEW TIMES FREE... Since we started Miami New Times, it has been defined as the free, independent voice of Miami, and we'd like to keep it that way. With local media under siege, it's more important than ever for us to rally support behind funding our local journalism. You can help by participating in our "I Support" program, allowing us to keep offering readers access to our incisive coverage of local news, food and culture with no paywalls.
Make a one-time donation today for as little as $1.