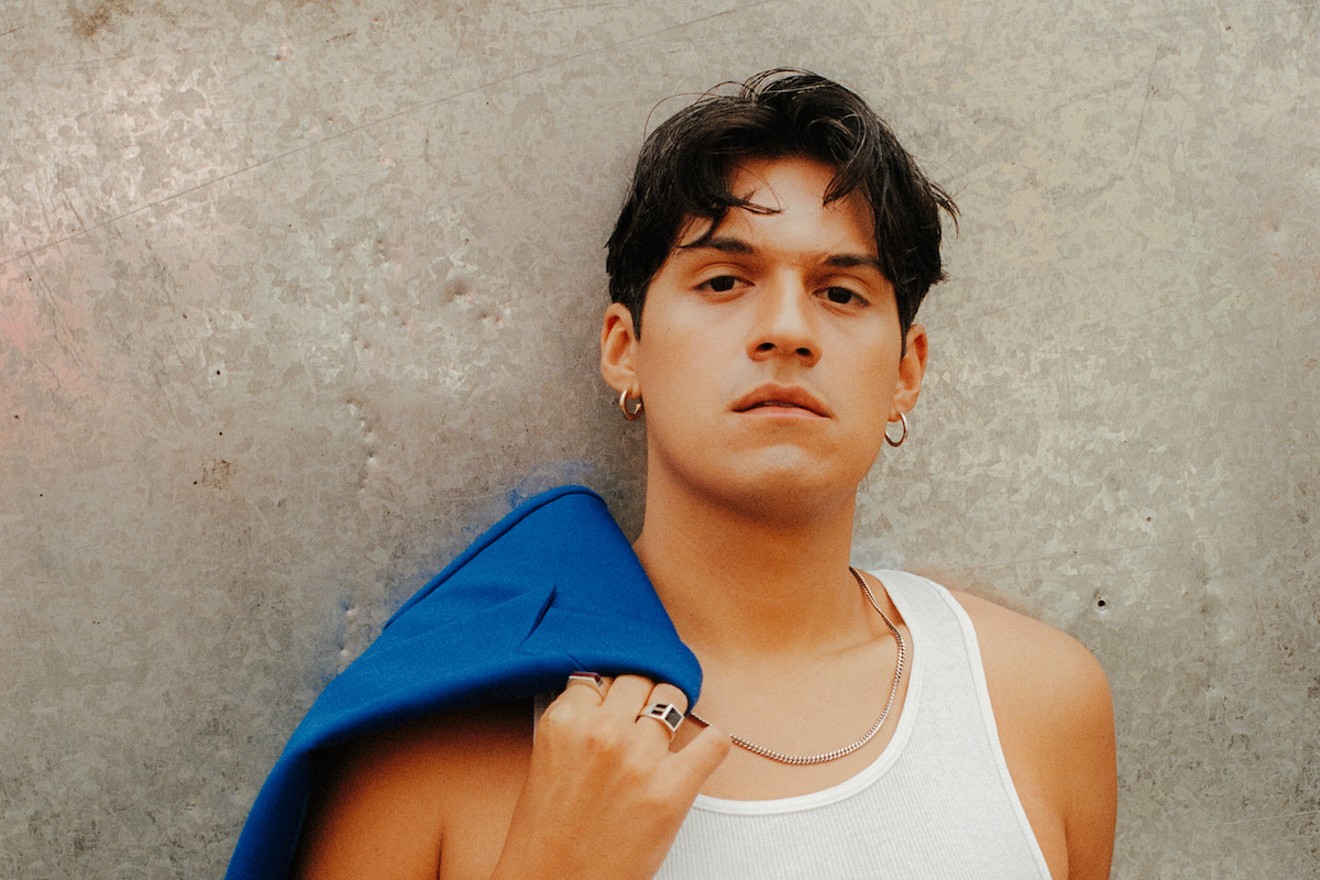 Omar Apollo Photo by Rodrigo Alvarez
In the midst of an arduous tour across North America, Mexican-American singer-songwriter Omar Apollo has a lot of time to think. He sits alone with a pen and pad for hours in a Philadelphia green room, and he thinks.

Seclusion can be an outlet.

Apollo picks apart the idiosyncrasies of his favorite musicians and contemplates the building blocks of good songwriting. The 24-year-old Indiana native seemingly references his myriad musical influences out of reflex, jumping from Joni Mitchell to the Beach Boys to Andre 3000 and then back to Joni Mitchell.

“There’s a generic way to write, and then there’s a very specific way to write,” Apollo tells New Times. “Joni Mitchell would write about pinball machines at the casino or some shit, and it’s so specific. But she also has a balance, too, of writing about love in a general way.”

Since the start of his music career, Apollo has exhibited a consistent knack for vocalizing soulful serenades. Stories marked by sexual intimacy and romantic tumult are cornerstones of his discography. These themes are palpable in his 2018 track “Unbothered,” a slow jam that flashes the emotional depth and vocal flexibility he’s come to be known for.

When he performs, Apollo is met with the sounds of shrills and cries and hooks and verses from admirers and devotees. He basks in it. “I’m at the shows every day,” he says, “and I’m hearing people singing the lyrics, screaming them back at me. It’s just really fulfilling to see it in real time and real life.”

The release of Ivory, Apollo’s debut studio album, last month was a long time coming. He began working on the record in 2020, initially anticipating its release and the subsequent tour would materialize by the end of 2021. As time passed, he found himself in a hole.

Months of caving to ceaseless input from label reps and A-list producers only made way for noxious compromise. Eventually, Apollo was burdened with a collection of unfinished songs he felt no connection to — so he pressed the reset button. The entire album rollout was scrapped indefinitely.

“I just had to set boundaries with the creative process,” Apollo says. “For it to be how I wanna be, I gotta set boundaries.”
He sought complete isolation from distractions of any kind. That meant no industry heads breathing down his neck, no friends messing around in the studio, no temptations from bustling nightlife. He trekked to the mountainous ranges of Northern California and locked in to record what would become some of the most artful, heart-wrenching balladry of 2022.

At its most vulnerable, Ivory is delicately subdued and ingenuously anecdotal. Apollo paints himself as an insatiable romantic, clinging to crumbling memories of long-departed beaus. He croons over weeping guitar chords and wistfully harmonizes behind lovesick songwriting, sometimes shifting between English and Spanish.

“Pace 'round, sittin' down, wishin' for a sign/That don't come, I'll stay here as long as I'm alive/I'm waitin' on you,” he sings on “Waiting on You.”

At its most lively, Ivory is a party starter. On “Tamagotchi,” Apollo channels aphrodisiac bravado with Latin flair and curt one-liners à la Playboi Carti. For the production, hall-of-fame duo the Neptunes fused swirling woodwinds with thumping bass and a rehashed vocal sample from Uncle Luke’s “I Wanna Rock.”

Observing Pharrell Williams' creative process was nothing short of life-changing for Apollo, and it inspired him to find the value of simplicity in his craft. As he put together the final pieces for the album, trusting himself and his own process eventually carried him across the finish line.

Ivory’s positive reception from fans and critics isn’t lost on Apollo, and as he’s taking it all in during tour, he’s still motivated to build on his momentum. For the rest of this year, he looks forward to more music, more touring, and pursuing other creative endeavors through his clothing brand, Sky Parlor.

Everyone around Omar Apollo has known for a long time that there’s a future of unbridled prosperity and fulfillment in store for him. Thankfully, he has learned to set himself free.

Omar Apollo. With Deb Never. 3 p.m. Thursday, May 26, at Space Park, 298 NE 61st St., Miami; spaceparkmiami.com. Tickets cost $20 to $90 via eventbrite.com.
KEEP MIAMI NEW TIMES FREE... Since we started Miami New Times, it has been defined as the free, independent voice of Miami, and we'd like to keep it that way. With local media under siege, it's more important than ever for us to rally support behind funding our local journalism. You can help by participating in our "I Support" program, allowing us to keep offering readers access to our incisive coverage of local news, food and culture with no paywalls.
Make a one-time donation today for as little as $1.
Olivier Lafontant is an intern for Miami New Times. He's pursuing a bachelor's in digital journalism at Florida International University. He specializes in music writing and photography and got his start as a writer for South Florida Media Network in 2021.
Contact: Olivier Lafontant
Follow:
Twitter: @oliviersaidhi
Instagram: @oliviersaidhi