Denzel Curry sits atop a newfound peak of level-headedness and tranquility. Photo by Adrian Villagomez
When an 18-year-old Denzel Curry released his debut studio album, Nostalgic 64, in 2013, one of the biggest goals he had in mind was simply getting paid for it. After two years of running with the fabled Raider Klan rap collective, it was time for him to illuminate himself from under the opaque haze of the Dirty South.

His pockets needed the help too.

"When I was making Nostalgic and the bars got [better] and the features and songs sounded crisp and polished, that's when I came up with the idea of, like, 'Man, I'm broke! Why do I give out these bars for free? Motherfuckers need to pay for this shit,'" Curry tells New Times over Zoom.

Through nightmarish production and storytelling, N64 presented the volatile angst of the Carol City rapper's still-developing psyche. More importantly, it unearthed a level of lyrical vulnerability that would evolve into a conceptual staple of Curry's music. Nine years later, he's smoothed out the edges of his emotional landscape and the act of walking his audience through the process.

From Rough Trade East in London, Curry makes time for a meet-and-greet with fans before back-to-back live performances that same day. Morale is high as of late. His fifth solo album, Melt My Eyez See Your Future, has been lauded by critics, and his final show on tour with Kid Cudi will take place in his hometown of Miami on Sunday, September 4.

Sometimes he's blunt when he speaks — and it's hilarious — but what matters most is that he remains unwaveringly transparent.

Transparency is a theme that shines through immensely on Melt My Eyez, as Curry sits atop a newfound peak of level-headedness and tranquility. The jagged nature of his past work has clearly been superseded by maturity and the desire to treat neglected wounds. Even as the album's opener, "Melt Session #1," laments over sexual trauma and suicidal thoughts, the soulful instrumentation and uplifting vocal tones make way for light at the end of the tunnel.

“I couldn’t play that song for months," Curry says of the track. "Even when I made it, I didn’t want to play it for anybody. It was one of them things like, Damn, this is me unmasked. I know who I am and I see all the shit I do, and it just sucks that I gotta see that.”

If anybody can attest to the catharsis that comes with voicing your troubles through your music, Kid Cudi is one of the first artists who come to mind. Well before the recording of Nostalgic 64, Cudi's Man on the Moon series served as a guiding light for Curry and other teens who were navigating through personal shortcomings. The opportunity he's taken as an opener for Cudi's To the Moon Tour is a "full-circle moment" for him, but his long-term ambitions stretch much further. 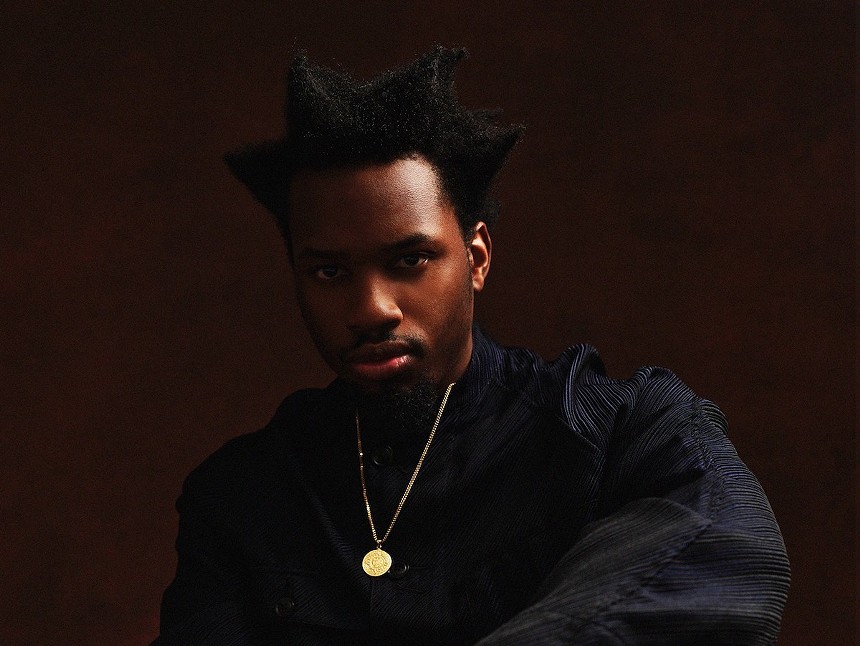 Being framed as an underdog doesn't discourage Denzel Curry.
Photo by Adrian Villagomez
At some point, Curry looks to be the headliner of a stadium tour and be universally regarded as the best rapper alive. When asked if he was weary of having to "dumb down" his music to get to that point, he responded with a bar from Jay-Z's "Moment of Clarity": "Truthfully I want to rap like Common Sense/But I did five mil' – I ain't been rhyming like Common since."

Money talks, but it runs deeper than that.

“I tell my fans all the time: I’m not doing this just to do it, I wanna win a Grammy off this hoe," Curry elaborates. "But it feel like I don’t get recognized for what I do, even though I’ve been doing this for a long time.”

Being framed as an underdog doesn't discourage him. The blueprint for his next studio album, Designed by Angels, is already materializing, and surely enough, he seems confident in his ability to mold something timeless. It's inspired by some of Curry's favorite R&B records, including Frank Ocean's Channel Orange, OutKast's The Love Below, and D'Angelo's Voodoo.

In order to make the jump to the next level, Curry looks to collaborate with experienced songwriters who can assist him in becoming a more prolific hitmaker. Designed by Angels will lean more into melodic song structures with less emphasis on rapping. In the meantime, he plans to release Unlocked 2.0 with Kenny Beats as well as a follow-up to 2020's 13LOOD 1N + 13LOOD OUT MIXX.

Impatience aside, at age 27, Curry has been an established figure in hip-hop for an entire generation. The progression in his career and personal life might not have been linear, but he's taking the steps necessary to keep improving. He mentions how therapy helped him realize the importance of truly feeling his emotions and says he'd like for that to translate to his music.

Long gone are the days when the thing that mattered most in a rap song was how hot your 32-bar verse was.

“It’s the feeling it evokes," he says of the music he wants to make. "Whether you can feel angry, happy, sad. You want all of those varieties of emotions within the music, because that’s what makes it the experience.”

Kid Cudi. with Denzel Curry, Don Toliver, Strick, and 070 Shake. 7 p.m. Sunday, September 4, at FTX Arena, 601 Biscayne Blvd., Miami; 786-777-1000; ftxarena.com. Tickets cost $34.75 to $175 via ticketmaster.com.
KEEP MIAMI NEW TIMES FREE... Since we started Miami New Times, it has been defined as the free, independent voice of Miami, and we'd like to keep it that way. With local media under siege, it's more important than ever for us to rally support behind funding our local journalism. You can help by participating in our "I Support" program, allowing us to keep offering readers access to our incisive coverage of local news, food and culture with no paywalls.
Make a one-time donation today for as little as $1.
Olivier Lafontant is an intern for Miami New Times. He's pursuing a bachelor's in digital journalism at Florida International University. He specializes in music writing and photography and got his start as a writer for South Florida Media Network in 2021.
Contact: Olivier Lafontant
Follow:
Twitter: @oliviersaidhi
Instagram: @oliviersaidhi