Cash Money's Eighty8 Reveals Details About His Upcoming EP, Rise of the Ape 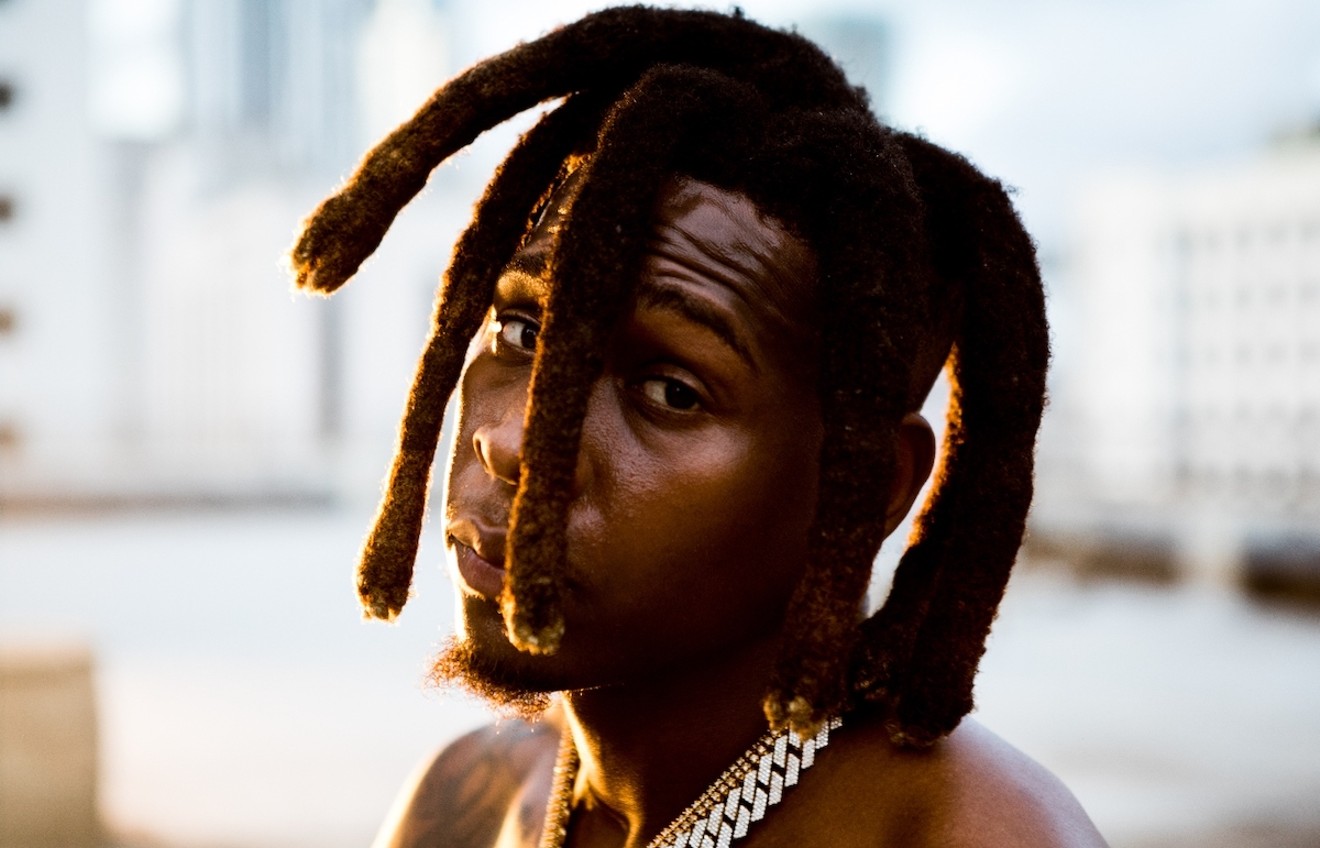 Formerly a singer, Eighty8 has transformed himself into a rapper at Cash Money Records. Photo by AJ The Visionary
Nearly seven years ago, Miami's own Eighty8 was a rising singer coming up in the group founded by Bigg D and Lamb, 4th & Ocean. If you remember the group's hits like "Bussin It" and "Peyton Manning," then you've already been exposed to Eighty8's rare talent and range.

Now the artist formerly known as Breeze plans to blow up in the rap game under Cash Money Records.

Shortly after mentioning him as one of the ten rappers to watch in 2022, New Times caught up with the North Miami native. On a cool, breezy night in Sunny Isles Beach, Eighty8 is sitting at Beach Bar at Newport Pier, one of Cash Money cofounder Ronald "Slim" Williams' favorite spots in the city. While munching on some sushi and mahi-mahi, the 27-year-old describes why he switched up his style after 4th & Ocean. Despite citing Michael Jackson and Usher as his past muses, nowadays he draws inspiration from Miami OG's Trick Daddy and Plies.

"I like my music to be about storytelling and for it to take you somewhere," Eighty8 tells New Times. "Let the story take you there. I got that from Trick and JT [Money] and all the ones who came before me. Things like that made an impact on me. I could sing things to you, but singing can only do so much. Rap expresses the things you want to say better because there are more words and depiction."

Eighty8 ditched his gig as a full-time singer in 2017, two years after 4th & Ocean disbanded. As time went on, the singer-turned-rapper, who previously worked with the late Betty Wright, went on a spiritual quest to find his new persona. He had gotten the number eight tattooed on his right shoulder and chest, but he was Eighty8 well before that. He was born in August, the eighth month of the year, on the 26th day (two plus six is eight). Not only does it represent his birthday, but in numerology, 88 signifies prosperity and wealth.

After wrapping up at Beach Bar, Eighty8 guides New Times to Cash Money's home base at Criteria Recording Studio in North Miami. There he talks about the journey he's been on since signing to Birdman and Slim's label.

At the beginning of his career as a rapper, Eighty8 had only released a handful of records like "Shadows" and "Doley." Then he dropped the video for his freestyle "What You Gon Do," piquing the interest of A&R reps.

"The music was being played in rooms that we hadn't even walked into yet," Eighty8 says. "The interest came, but we never stopped working. Miguel, who's my manager, got the music to [Cash Money]."
Since then, Cash Money has been all-in on its new artist.

"Eighty8 is untouchable," Slim said in a statement. "He can sing. He can rap. He's really the full package. He's bringing a new international sound unlike anything else out there right now, and he's got enough star power to blow up this year."

"It felt right, and it was everything I was trying to achieve," Eighty8 says about the deal. "When I think about what it is that I do and what I want to be known for in this world, it's to be legendary. They have a track record of making legends."

Not long after signing in 2020, Eighty8 began to build his catalog at Cash Money. Last year, he released his debut song on the label, "HIT," a slick banger full of confident bars over a horn-based loop. Soon after, he released the music video, which has amassed over two million views to date. As a follow-up, the rapper decided to drop a visual mixtape featuring clips of music videos for songs that haven't been released yet. There's a chance they'll end up on his upcoming EP.

"Rise of the Ape is the EP I'm working on now," Egithy8 says. "It might progress into an album depending on however we play it. I just want people to understand it first. That's why we're kind of spoon-feeding them first, but we're about to get aggressive."

At the studio, Eighty8 plays the full versions of songs like "Boom," "Heartless," and "Trilly Wonka" for New Times. His dreads rock back and forth as he bounces like he's on stage and raps along with the recorded verses. Although he couldn’t confirm the EP's tracklist or release date, he says he plans to drop several singles and videos this year. As the newest addition to Cash Money's roster, he's focused on carving out a unique path that's completely separate from any artist involved with the label.

While the rookie on the team was preparing his debut single last year, Cash Money's Birdman and his now-former artist Lil Wayne were celebrating their reconciliation by dropping “Stunnaman," their first collaboration in a decade. The two legendary rappers officially squashed their beef back in 2018 during a party at LIV three years after Wayne filed $51 million lawsuit against the label. With the highly publicized legal battle in the past, Eighty8 is confident his time on the label won’t mirror Wayne’s experience.

"A wise man told me, 'You can't cry over another man's spilled milk. You can cry if you spill yours. Make sure you don't spill your milk,'" Eighty8 explains. "Business is business, so you don't get what you want or what you believe you deserve. You get what you negotiate. Life's funny like that. No disrespect to nobody, it's just business is business. I've been through plenty of ups and downs so I understand business. Me and my team worked out something that feels good to us. I can't speak for nobody else."
KEEP MIAMI NEW TIMES FREE... Since we started Miami New Times, it has been defined as the free, independent voice of Miami, and we'd like to keep it that way. With local media under siege, it's more important than ever for us to rally support behind funding our local journalism. You can help by participating in our "I Support" program, allowing us to keep offering readers access to our incisive coverage of local news, food and culture with no paywalls.
Make a one-time donation today for as little as $1.