The Many, Many Faces of Rolling Loud Work in Harmony

Seven years after the festival's inaugural run in Wynwood was flooded by rainfall, founders Tariq Cherif and Matt Zingler are on the southern coast of Portugal wrapping up preparation for their second of back-to-back Rolling Loud fests in Europe. Business is business, but there's plenty of reason to be excited.

"Man, this shit is on the beach, bro!" Cherif says over Zoom, grinning widely.

Only two days have passed since Rolling Loud's first-ever collab with Woo Hah! Festival (July 1-3), one of the Netherlands' largest live hip-hop gatherings, but Cherif and Zingler are already fixated on what comes next. From one three-day blowout to the next, the ball keeps rolling. Then again, that has pretty much been the case for Rolling Loud all along.

Following Portugal, a scant two weeks will remain until a triumphant return to Hard Rock Stadium in Miami Gardens. On the weekend of July 22, Rolling Loud will unveil an experience that runs much deeper than the turbulent mosh pits and gaudy photo ops fans have come to expect.

Of course, the music comes first. 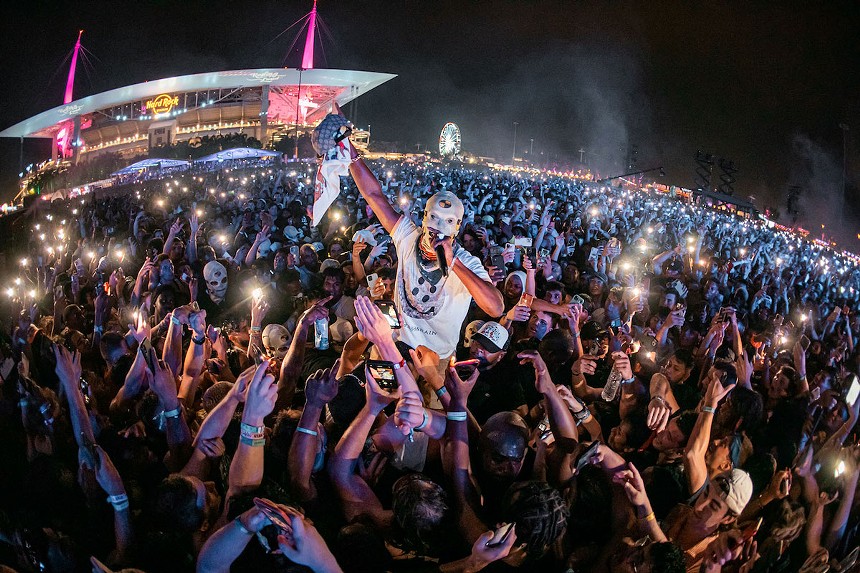 A$AP Rocky diving into the crowd during last year's Rolling Loud.
Photo by Leanne Leuterio/@snap_ll
Rolling Loud has always been synonymous with the iconoclasts of the SoundCloud era, but hosting genre-defining greats has consistently been an element of its success story. This year's triad of headliners, Ye, Future, and Kendrick Lamar, might be enough to split the ground wide open. From the founders' perspective, though, it's still just business. That, and a touch of good timing.

Zingler notes that release dates and rollout cycles are crucial to lineup formation, and Cherif flexes the advantage of bonding with superstars on a personal level: Working with Kendrick and Future has become a Rolling Loud tradition, and with each boasting a new album making the rounds, it's a no-brainer for them to spearhead the Miami roster.

Their kinship with Ye sparked more recently, however.

"We were blessed to have Kanye come to our show in LA in 2021, and we just built a relationship with him from there," Cherif explains. "We started helping him with some things like his Donda 2/22/22 show; we helped him get XXXTentacion on his album. He's the one who told us to announce [him coming to Rolling Loud Miami]. He was like, 'Yo, announce this right now!' I was like, 'OK, bet!'"

(Editor’s note: Soon after this story was published, Rolling Loud announced that Kanye West had backed out of Rolling Loud and would be replaced by Kid Cudi at the top of the bill. "We were looking forward to Ye headlining Rolling Loud Miami 2022. We spent months working with him and his team on the performance," the organizers stated in a press release. "Unfortunately, Ye has decided that he will no longer be performing. This is the first time a headliner has ever pulled off our show and though we don't take it lightly, we wish him the best. We look forward to welcoming Kid Cudi as a headliner in Miami and we can't wait to see what he has in store." For details on this development, see "Kanye West Pulls Out of Rolling Loud 2022.")

High-caliber talent calls for high-caliber presentation, and the organizers behind Rolling Loud are fully aware of the standards they have to exceed with each passing year. Festival grounds are set to turn into a multifaceted art district, elevating the ambiance and novelty of the weekend-long experience. 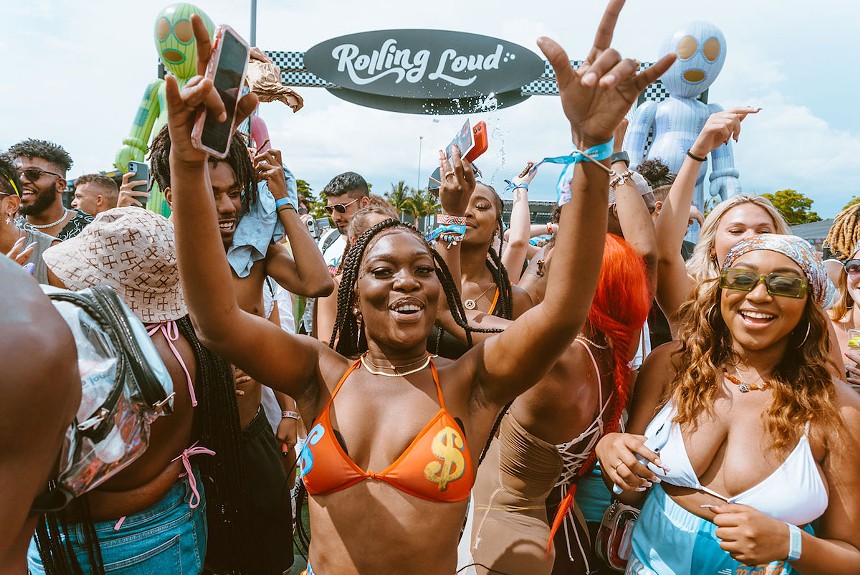 Rolling Loud promises much more than just music this year.
Photo by Kadeem Olijah/@kadeeeem
Lexie Dolan, Rolling Loud's director of fest experience and décor, holds major creative sway over the structural aesthetics: roller-coaster rides, site activations, furniture, signage, lighting, branding, and greenery. With help from her cohorts, Dolan's job is to materialize the trendsetting nature of Rolling Loud through all the little details that stick out once you set foot on-site.

As a music festival veteran, Dolan's previous jobs typically forced her to compartmentalize design plans based on themes and genres, but that isn't the case this time.

"Our job is here to tie in the stories between each of the stages," Dolan says. "It creates one cohesive environment that flows through each other. I had a lightbulb moment when I realized Rolling Loud really can't be boxed into one specific thing because the brand is all about staying up with what's current and what's hot right now."

Part of the ever-evolving nature of the brand is the incorporation of experiences that make way for lasting memories. Attendees can access a wide range of activations in and around the VIP section, including Loud Club, a walk-in merch store, a barbershop, and a complimentary tattoo shop. Dolan especially looks forward to activating Bunny's Bae Bar, an alluring hotspot for glitter and cosmetics. 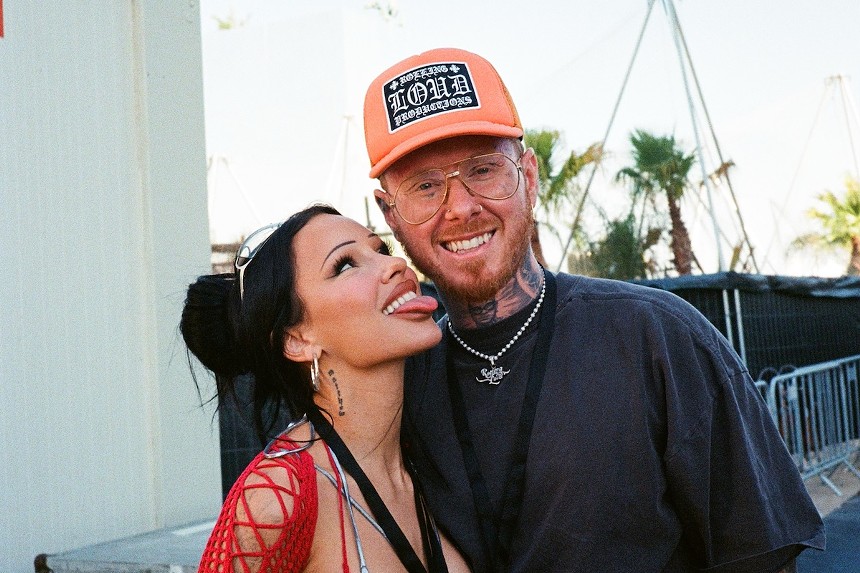 Bunny and Matt Zingler
Photo by Mickey Perrie-Louis/@itchyeyephotos
Created by Bunny Zingler, Matt's wife, Bunny's Bae Bar has established itself as a Rolling Loud staple of femininity and will operate two on-site locations for the first time around: one for general admission and one for VIP. Bunny prides herself on building "an experience within an experience." One where her warmhearted community can thrive within the spaces she provides. Along with her team of beauticians, she dedicates herself to providing a versatile array of hairstyles, glamour, and apparel.

The Bae Bar is one of many components that contributes to boosting the value of VIP, which both Matt Zingler and Dolan placed considerable emphasis on. Rather than having to pay for desired services, the VIP Bae Bar is free of charge. This also applies to snacks, drinks, access to shaded structures, and flash tattoos by way of Matt's House of a Thousand Roses, a tattoo shop Zingler co-owns with famed Miami artist Tatu Panda.

"We're really excited to have this because tattoos are definitely a part of music culture, and it's always been a big thing for us to encompass all these little elements that provide unique experiences," Matt explains. "It really shows you the value of VIP." 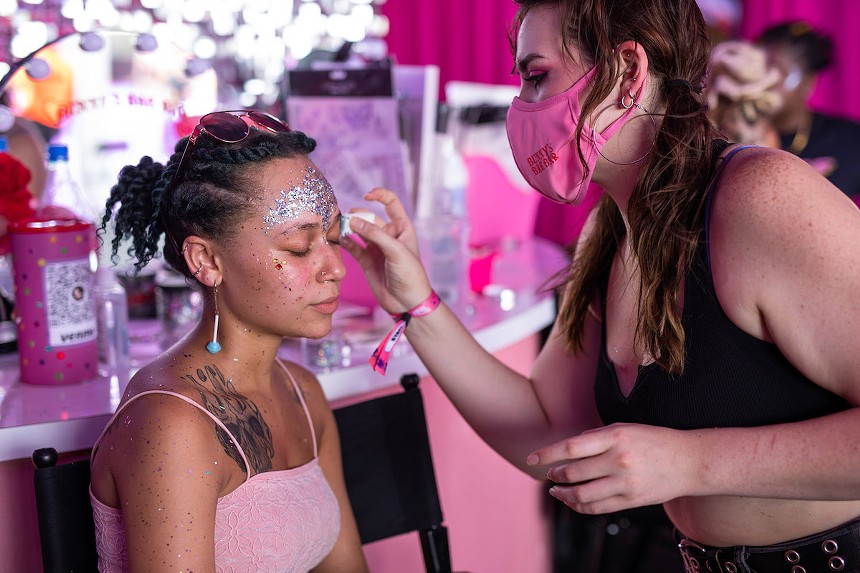 Bunny's Bae Bar returns to glam up festivalgoers.
Photo courtesy of Rolling Loud
At age 28, Tatu Panda has been tattooing for half his life. For him, tattooing is an intrinsic vessel of creativity, and his micro-realism style has drawn an abundance of positive feedback. He describes his work with Zingler as purely "organic" and something bred out of mutual love for tattoos. This edition of House of a Thousand Roses will bring several of Panda's seasoned artists providing festival-themed tattoos in VIP.

"Hip-hop is one of the most crude, unfiltered forms of expression, and tattoos literally go in hand with that," Panda says. "People speak about themselves, not only through their music but through the art on their skin. This isn't a piece of art that they bought and put in their living room."

The activations showcase what it means to dip into the rap world's increasingly fluid gene pool. So many different symbols and activities exist as extensions of what hip-hop has come to mean in today's society. Everything, from clothing to hairstyles to art, is a part of the same whole.

Rolling Loud simply puts it all together.

Rolling Loud 2022. Friday, July 22, through Sunday, July 24, at Hard Rock Stadium, 347 Don Shula Dr., Miami Gardens; 305-943-8000; hardrockstadium.com. Tickets cost $349 to $1,414 via rollingloud.com.
KEEP MIAMI NEW TIMES FREE... Since we started Miami New Times, it has been defined as the free, independent voice of Miami, and we'd like to keep it that way. With local media under siege, it's more important than ever for us to rally support behind funding our local journalism. You can help by participating in our "I Support" program, allowing us to keep offering readers access to our incisive coverage of local news, food and culture with no paywalls.
Make a one-time donation today for as little as $1.
Olivier Lafontant is an intern for Miami New Times. He's pursuing a bachelor's in digital journalism at Florida International University. He specializes in music writing and photography and got his start as a writer for South Florida Media Network in 2021.
Contact: Olivier Lafontant
Follow:
Twitter: @oliviersaidhi
Instagram: @oliviersaidhi