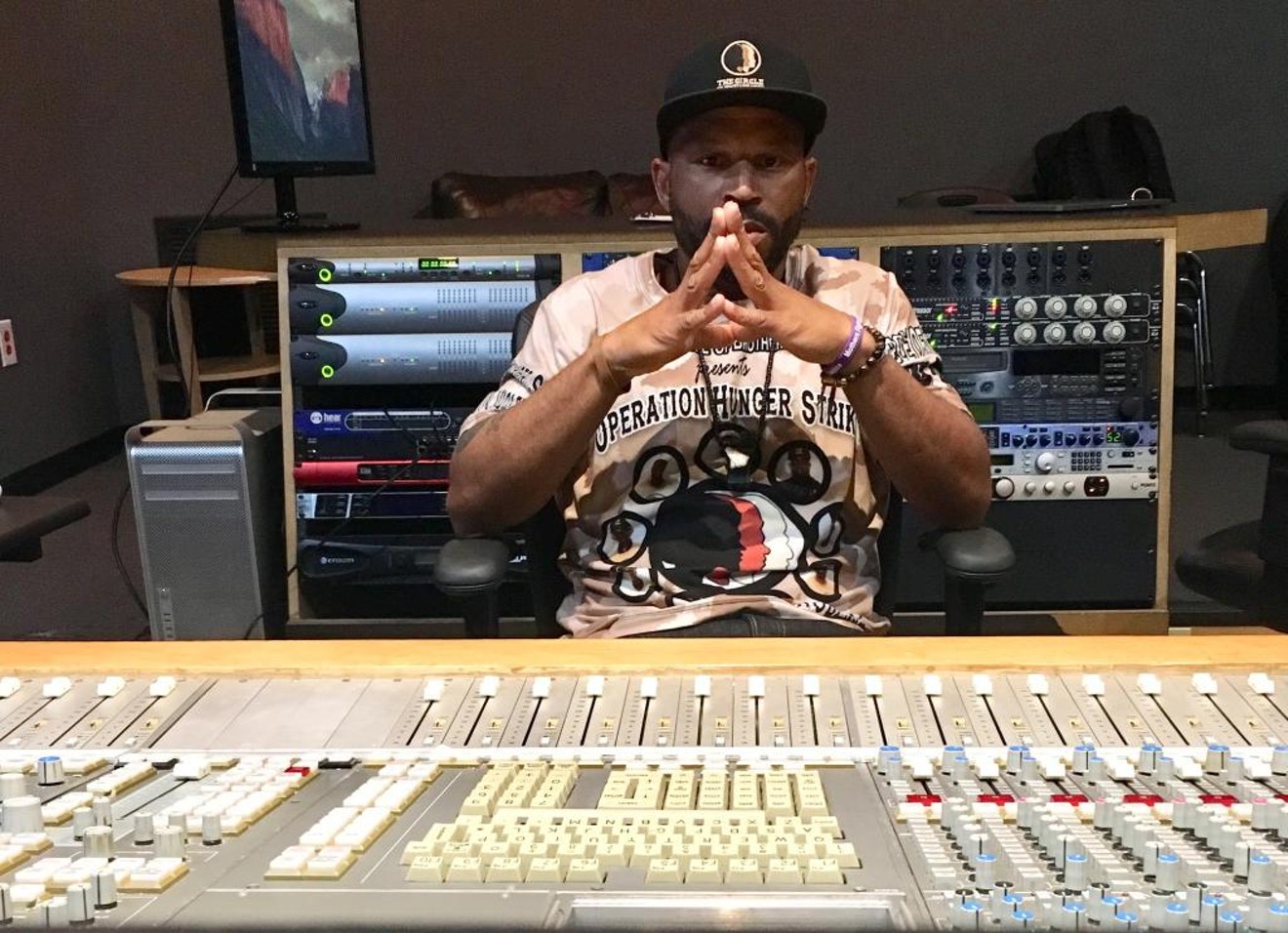 Anthony Blackman, president of Circle of Entertainment, in the studio working on the Community Development Music Conference. Courtesy of Anthony Blackman
For 21 days, nine men in Miami participated in a hunger strike to raise awareness about gun violence. Ground zero — a lot in Liberty City where the members of the Circle of Brotherhood set up their demonstration — was not only a place of political expression but also a pocket where an exchange of ideas and creativity flourished, birthing the inaugural Community Development Music Conference.

Anthony Blackman, president of Circle of Entertainment LLC and one of the Hunger 9, is organizing the event in collaboration with the Circle of Brotherhood as the first phase of the group's community wellness plan.

Blackman says music, specifically hip-hop, substantially influences how black and brown people are affected by gun violence. He wants to change the messages in music to reflect the awareness society is waking up to politically, spiritually, and creatively. For Blackman, it's about relaying the message of unity through all genres of music, not just hip-hop but also jazz, soul, reggaeton, rock, and others.

"Music is a universal language; it was created by us and is probably the number one source of how we communicate with each other. If we're going to address gun violence and the crime in our community, we must address the music that our youth and our people are listening to," Blackman says. "Gun violence, crime, drugs, abuse in some form or fashion is related to music. If you listen to the number one song right now, it encourages the demons that we stand against."
The Community Development Music Conference aims to connect the public and private sectors of the music industry with corporate entities and nonprofits. The event, set to take place Tuesday, June 4, at the Sandrell Rivers Theater in Liberty City, will also offer job opportunities, collaborations, panel discussions, and a talent showcase. But most important, Blackman and the Brotherhood want to gather the talent and the players of the local music scene under one roof. He says the conference is a way to finally give a diverse group of people a seat at the table and cross-pollinate the city's individual music scenes.

In a recent win, the Circle of Brotherhood secured funding through the Miami-Dade Group Violence Intervention Initiative, which recognizes the brothers as positive role models. As the boots on the ground for the county's new plan to reduce gun violence, the Brotherhood's members will go door-to-door in high-crime areas.

"We are the pioneers of the new conversation, and any movement in the history of this nation all started with somebody taking a chance," Blackman says. "Everyone knows everyone in the music industry in Miami. The reason we haven't broken out as a city is that everyone is doing their own thing individually. When we collectively come together, we're stronger creatively. The Circle of Entertainment is literally aiming to bring a circle of people together who want to uplift their city through entertainment and music."

The Community Development Music Conference. 6 to 11 p.m. Tuesday, June 4, at the Sandrell Rivers Theater, 6103 NW Seventh Ave., Miami. Admission is free, but seats are limited; RSVP via eventbrite.com. Free garage parking at 6104 NW Sixth Ct. Light refreshments will be served by the Brownsville Culinary Academy. For more information, visit circleofentertainment.com. To donate to the Brotherhood, visit circleofbrotherhood.org, and for more information, call 305-993-8212 or email [email protected]. Follow the Circle of Entertainment on Facebook.
KEEP MIAMI NEW TIMES FREE... Since we started Miami New Times, it has been defined as the free, independent voice of Miami, and we'd like to keep it that way. With local media under siege, it's more important than ever for us to rally support behind funding our local journalism. You can help by participating in our "I Support" program, allowing us to keep offering readers access to our incisive coverage of local news, food and culture with no paywalls.
Make a one-time donation today for as little as $1.