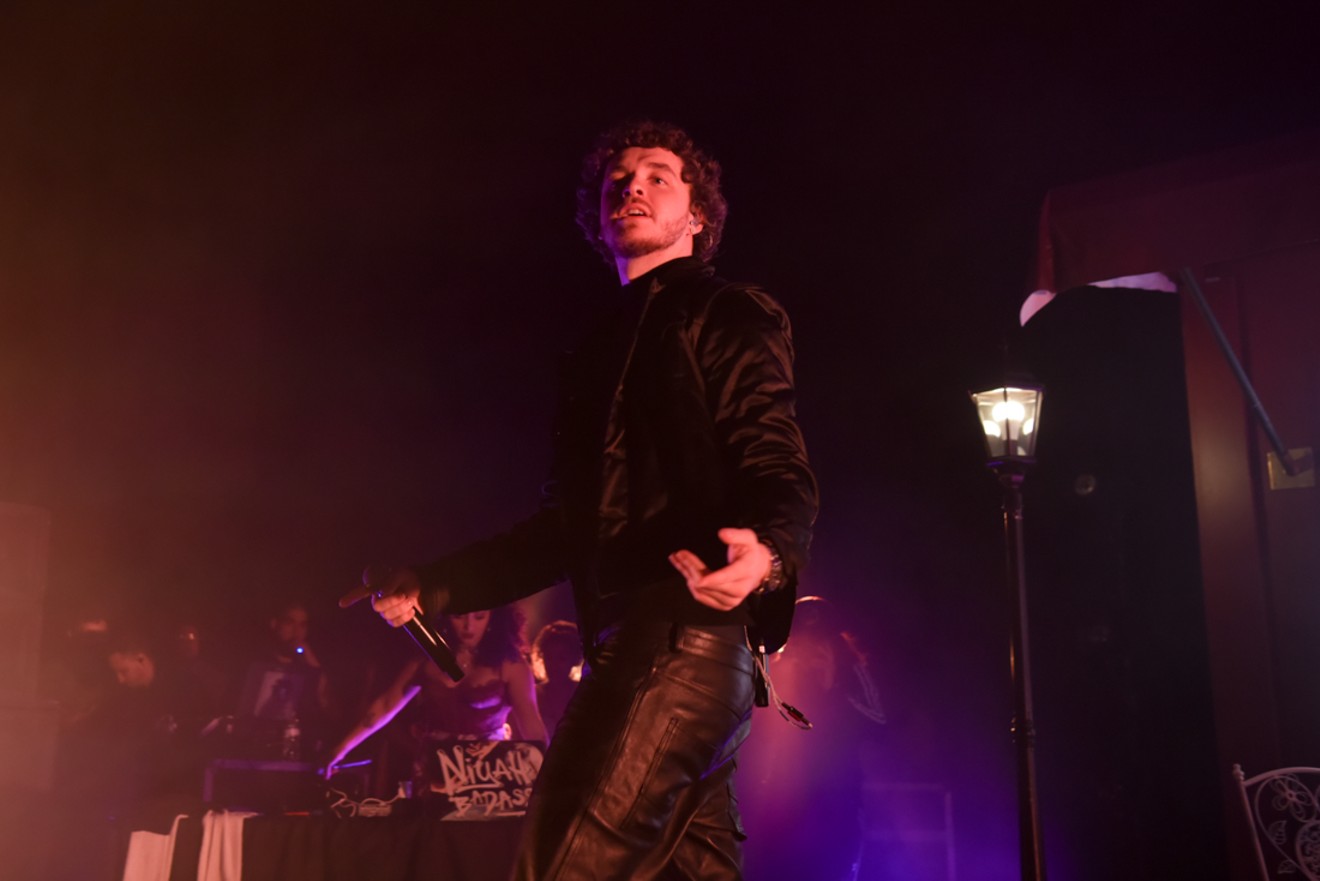 Jack Harlow performed at the Fillmore Miami Beach on September 10. See more photos from Jack Harlow at the Fillmore Miami Beach here. Photo by Michele Eve Sandberg
Louisville rapper Jack Harlow has a look that might convince you he’s a successful musician — or at least a regular at your local open-mic night with a day job managing a mall kiosk and a mostly ignored SoundCloud profile. He’s got an everyman charm, tangible in his lyrics as well as his stage presence. His crowd banter is archetypal but confident. His beats are energetic yet smooth, with just enough overdrive on the kick drum to earn him some indie-rap cred.

This all culminates to a product that college-age listeners eat up.

Babyface Ray’s set was delightfully reminiscent of the low-key setup of a local rap battle. He performed while the house lights were still on, and the audience, which waited in a line that wrapped around the venue, was still shuffling in. His trap burner “Like Daisy Lane” was a highlight that got arriving crowd, most of whom had never heard the track before, swaying and bumping. Babyface Ray also hosted an onstage twerking competition, which saw him pull girls from the pit to dance onstage for a chance to win a "cash prize." Quite entertaining, even to a venue filled with kids anxious for the main event to commence.

See more photos from Jack Harlow at the Fillmore Miami Beach here.
Photo by Michele Eve Sandberg
The Fillmore consistently impresses, with terrifically clear sound-mixing and a large swath of seats, all of which give a clear view of the stage. It was also amusing to watch gray-haired ushers contain droves of crossfaded coeds with surprising skill, directing them away from the high-priced pit area toward the general admission theater seating above. Of course, no one was sitting, especially after Harlow took the stage, his gorgeous Crème de la Crème café set illuminated behind him. At times, LED screens acted like windows to the café before alternating between entrancing visuals of clouds, fire, and vintage French TV commercials.

Harlow ripped into the chill, triplet-filled “Tyler Herro,” an ode to the Miami Heat small forward. He name-drops South Beach in the track (and he says Herro was present for the show). The crowd went wild for the bite-size banger, and the high energy persisted as Harlow transitioned seamlessly into “Warsaw,” a sex-fueled slow jam for the Tinder generation that manages to rhyme the title city (the Polish capital, but also a small Kentucky town midway between Cincinnati and Harlow's native Louisville) with words like “foresaw” and “northpaw.” It’s a testament to the free-association lyrical wordplay inherent in Harlow’s genre. (See editor's note on "Warsaw" at the bottom of this story.)

One of Harlow’s selling points is the earnest quality of his lyrics. Toward the end of his set, on “Rotten,” Harlow sang a final couplet that haunted many a Miami bro in the crowd: "Cîroc and Hpnotiq, I'm way out of pocket/Quit all the gossip, I'm simply a product of people I rock with." So much of the rap game, especially today, is about the perception of success. Perhaps what makes Harlow so charming is his ability to find this success without stunting to get it. He’s got no visible tattoos, features McDonald’s drive-thrus in his music videos, and has proudly gone sober.

See more photos from Jack Harlow at the Fillmore Miami Beach here.
Photo by Michele Eve Sandberg
Harlow stepped into the middle of the venue at one point, into the space where the pit meets the orchestra seating, and, amid a sea of screaming fans, performed the clouty “Face of My City,” followed by “Industry Baby,” the über-popular Lil Nas X track on which he features.

Other highlights included “Cody Banks” and “Sylvia,” which Harlow released back in 2019 when he still rocked a smooth face and Clubmaster eyeglasses. Diehard fans rejoiced, but the climax didn't arrive till the final two tracks, the smooth Chris Brown collaboration “Already Best Friends,” which Harlow prefaced with a fun anecdote about hitting on girls, and, of course, “Whats Poppin." For the latter, the crowd stood on the Fillmore’s seats, dancing precariously while frantic security guys tugged on their pantlegs and nagged them to come down. Though the chaos may have been reduced, it could not truly be contained, as Harlow’s rapid-fire verses vitalized the venue.

Harlow brought no guests on stage with him during his set. The hourlong performance was simple, which might be what made it so much fun. Aside from the overuse of that radio DJ airhorn sound (you know the one), it was also a sonically pleasing experience.

Editor's note: An alert reader informed us about the Warsaw (population 1,733) connection. A further scan of the lyrics to Harlow's song turns up this couplet — We can smoke something then sip the juice/Two Keys or the Tin Roof (Tin Roof) — which name-checks the two most famous college bars in Lexington, home of the University of Kentucky.
KEEP MIAMI NEW TIMES FREE... Since we started Miami New Times, it has been defined as the free, independent voice of Miami, and we'd like to keep it that way. With local media under siege, it's more important than ever for us to rally support behind funding our local journalism. You can help by participating in our "I Support" program, allowing us to keep offering readers access to our incisive coverage of local news, food and culture with no paywalls.
Make a one-time donation today for as little as $1.