Harry Styles performs at the BB&T Center. View more photos from Harry Styles and Kacey Musgraves' performance at the BB&T Center here. Sean McCloskey / SFLMusic.com
About seven songs into Harry Styles’ set at the BB&T Center Saturday night, the 24-year-old singer looks into the front row and notices a girl with a birthday hat. “Is it your birthday?” he asks. “You’re 18? Let me see your ID.” The girl passes up her driver’s license, and Styles squints to find the day. “It’s today!” he says, to shrieks from the crowd. Then he spots something else. “You were born in the year 2000? I feel like everyone who was born in the year 2000 is permanently 10 years old. You hear that, everyone? Let’s sing happy birthday to Angelina, because she’s 10 years old today!”

Styles, who shot to international fame at the age of 16 with the boy band One Direction before launching his recent solo career, has spent the past eight years performing for stadiums of preteen and teenage girls. But at this particular moment, it seems Styles almost can’t believe the young age of his audience. After a short round of "Happy Birthday," he finds more June 9 birthday girls. “You’re 15?” he says, laughing. “And you, you’re 7?”

There is something weird about the age range, partly because, in his new solo music, Styles’ whole vibe has shifted from Mickey Mouse Club extra to full-blown Jagger wannabe, complete with a tight suit, a plunging neckline, four giant rings, and a dance routine right out of "Dancing in the Street." Styles has gotten older and sexier, but his fans still mostly have braces. The whole show toes a line between flirty (Styles consistently blows kisses at the crowd) and paternal: Ushers pass out tinted paper for audience members to hold against their cell-phone flashlights, which were coordinated by seat to turn the stadium into a rainbow. “Harry is a believer in being who you are,” the papers say. “Our rainbow represents that it’s okay to be different.” 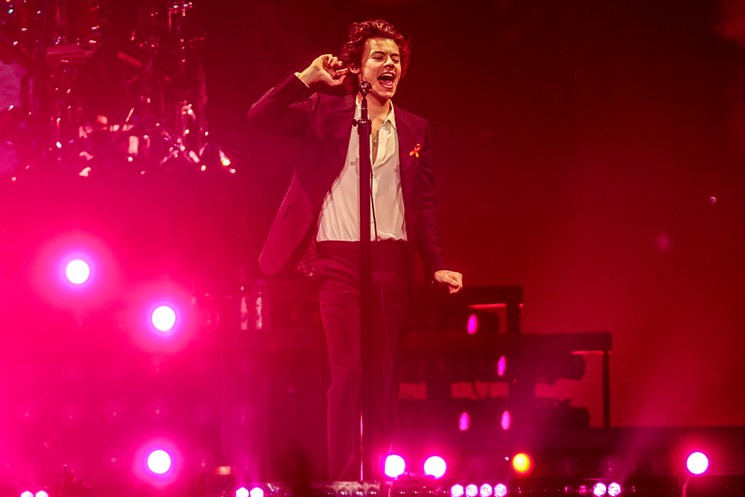 View more photos from Harry Styles and Kacey Musgraves' performance at the BB&T Center here.
Sean McCloskey / SFLMusic.com
I’d never actually been to one of these boy-popstar stadium shows before, but if I had, I’d have arrived at Styles' show knowing a little more about how they go down. When the ticket reads, “8 p.m.,” for example, they do not mean the doors open at eight, the show starts at 9, and the first act ambles on some 30 minutes later. They mean that the show begins promptly at eight and that the opener plays a tight 40-minute set, so if you get there at 8:30, you’ll see only the final few minutes of an electrifying performance from country-singer-come-pop-crossover Kacey Musgraves. Also, when people deride adolescent for its piercing shrieks and murderous pack mentality, it’s not entirely sexist snark born from a culture that undervalues art aimed toward women (though, mostly, it is). The show is very loud.

A recent NPR article described Styles’ music as a “testament to the borderlessness of contemporary pop,” but the show itself is pretty dull, mixing '70s soft-rock sounds with forgettable pop melodies. Styles has the vibe of someone who, if he hadn’t become the face of a billion-dollar pop brand, would have whipped out his guitar at a dorm room get-together to play the chorus of "Wonderwall," and his songs are about as enjoyable. But for as little as I like his music, there's something nice about how much his fans love it. On the Jumbotron, between shots of Styles crooning into the mike, the camera often zooms in on young girls, swaying with their eyes closed or dancing with their friends.

View more photos from Harry Styles and Kacey Musgraves' performance at the BB&T Center here.
Sean McCloskey / SFLMusic.com
“There’s no judgment at these shows,” my seat neighbor, who didn’t want to be named, says. “We’re just all happy to be here.”

Set list:
- "Only Angel"
- "Woman"
- "Ever Since New York"
- "Two Ghosts"
- "Carolina"
- "Stockholm Syndrome" (One Direction song)
- "Just a Little Bit of Your Heart" (Ariana Grande cover)
- "Medicine"
- "Meet Me in the Hallway"
- "Sweet Creature"
- "If I Could Fly"
KEEP MIAMI NEW TIMES FREE... Since we started Miami New Times, it has been defined as the free, independent voice of Miami, and we'd like to keep it that way. With local media under siege, it's more important than ever for us to rally support behind funding our local journalism. You can help by participating in our "I Support" program, allowing us to keep offering readers access to our incisive coverage of local news, food and culture with no paywalls.
Make a one-time donation today for as little as $1.