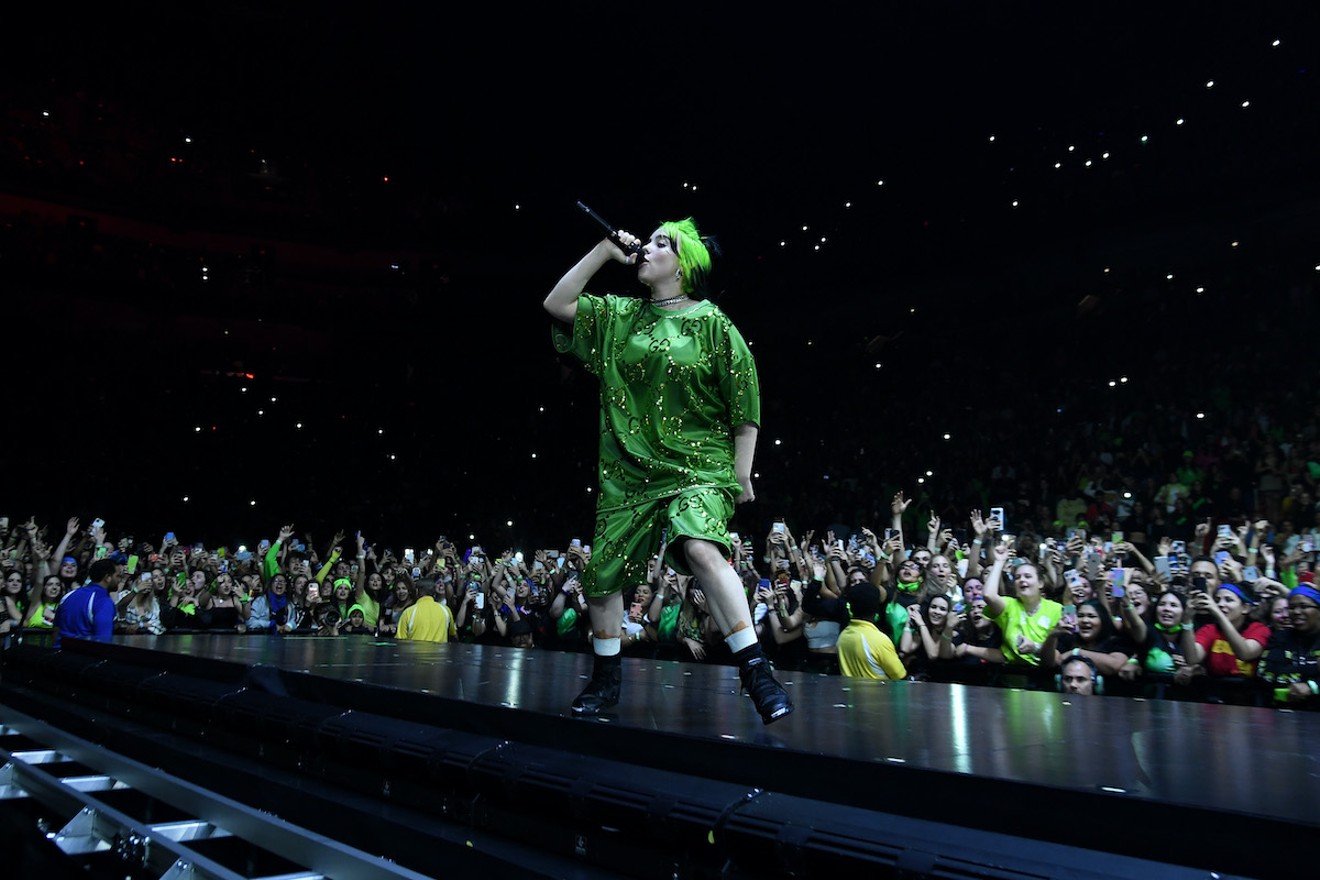 Billie Eilish kicked off her Where Do We Go? World Tour in Miami. Photo by Kevin Mazur/Getty Images for Live Nation
Everyone ought to love something as fiercely as the 20,000 screaming fans at the American Airlines Arena last night adore Billie Eilish.

The 18-year-old pop superstar kicked off her Where Do We Go? World Tour with her first-ever show in Miami. Current events and COVID-19 fears being what they are, it's entirely possible she won't hit all of her planned tour dates. Perhaps with that in mind, the musical phenom held nothing back during her 90-plus minutes onstage. And neither did her audience.

By the time the house lights dimmed around 9 p.m., the cries from the excited crowd had grown deafening. When a bed floated from the stage to 40 feet in the air, the noise level shot up another couple thousand decibels. And when Eilish "woke up" as if startled out of said bed, revealing her trademark neon-green hair, the cries turned to roars.

Like a Marvel superhero, she swung upside down from wires, landed on the stage, and went into her opener, "Bury a Friend," a song everyone in the arena except fans' unamused dads sang along to.

It has been said the Beatles quit touring because they couldn't hear themselves play during concerts. This writer always took that for mythology — until this show. To see a teen idol at the peak of popularity in a live setting is nothing short of insane. The level of unbridled enthusiasm even seemed to impress the headliner herself. "Your energy — it's fire," Eilish said from atop a girder 50 feet above the floor. "I need you to be like this the whole show."

Billie Eilish and her trademark neon-green hair.
Photo by Kevin Mazur/Getty Images for Live Nation
Eilish possessed plenty of her own energy, bouncing around relentlessly to her backing drummer's beats and her multi-instrumentalist brother Finneas O'Connell's trip-hop atmospherics. The spectacle was heavy on multimedia special effects — the video of "Xanny" played on a screen behind her, and every time a cigarette butt got crushed into the giant projection of her face, the smoke machine in the arena went to work. During the first interlude, confetti blew all over the pit as sepia images (shades of The Wizard of Oz) provided distraction. And at one point, Eilish pulled a ukulele from her bag of tricks and strummed during "8" while images of cute puppies scurried about onscreen.

About midway through the set, the crowd's passion waned just enough to render Eilish's singular voice audible to the naked ear. She snuck to a piano stationed at the back of the arena to accompany herself on a couple of ballads, including "Lovely" and "Listen Before I Go," before O'Connell joined her for a duet of "I Love You."

Before she launched into her last two songs, Eilish left the stage. In her absence, a video played, depicting her in slo-mo, stripping down to a sports bra. In an accompanying monologue, Eilish lashed out at the "trolls" who've body-shamed and bullied her on social media. (Predictably, footage of the video from inside the arena went bonkers on social media.) [Editor's note: To read a transcription of the monologue, scroll to the bottom of this post.]

But for sheer chutzpah, another daring move performed live moments earlier might have eclipsed the video interlude.

At the height of our collective coronavirus hysteria, Eilish walked through the audience and shook hands with fans as she returned from her piano to the stage. At least as far as this writer could see, she didn't use hand sanitizer afterward.

Maybe it's that devil-may-care attitude that led her show to go on while decades-old institutions such as Ultra Music Festival and South by Southwest closed up shop. That said, fans who've purchased tickets for future dates should know that Eilish had to stop during "No Time to Die" — her contribution to the canon of James Bond movie theme songs — to cough into her elbow. "I need water," she said, then proceeded to drink from a bottle before spraying the remainder on her fans. One can only imagine the drenched few stopped at the merch table afterward to purchase an official lime-green Billie Eilish surgical mask — an apparel choice the pop star first donned long before this current madness began — priced at $10 apiece.

Finneas and Billie Eilish
Photo by Kevin Mazur/Getty Images for Live Nation
All cynicism aside, lovers of live music might be entering a dark time. As concerts and festivals are canceled or postponed seemingly every hour, who knows when we'll next get to sing along with thousands of strangers? Billie Eilish made the most of her opening night at a moment when no future show can be 100 percent promised. And South Florida fans, too, rightly relished the moment.

“If I wear what is comfortable, I am not a woman. If I shed the layers, I am a slut. Though you’ve never seen my body, you still judge it and judge me for it. Why? You make assumptions about people based on their size. We decide what they’re worth. If I wear more, who decides what that makes me? What that means? Is my value based only on your perception? Or is your opinion of me not my responsibility?”
KEEP MIAMI NEW TIMES FREE... Since we started Miami New Times, it has been defined as the free, independent voice of Miami, and we'd like to keep it that way. With local media under siege, it's more important than ever for us to rally support behind funding our local journalism. You can help by participating in our "I Support" program, allowing us to keep offering readers access to our incisive coverage of local news, food and culture with no paywalls.
Make a one-time donation today for as little as $1.