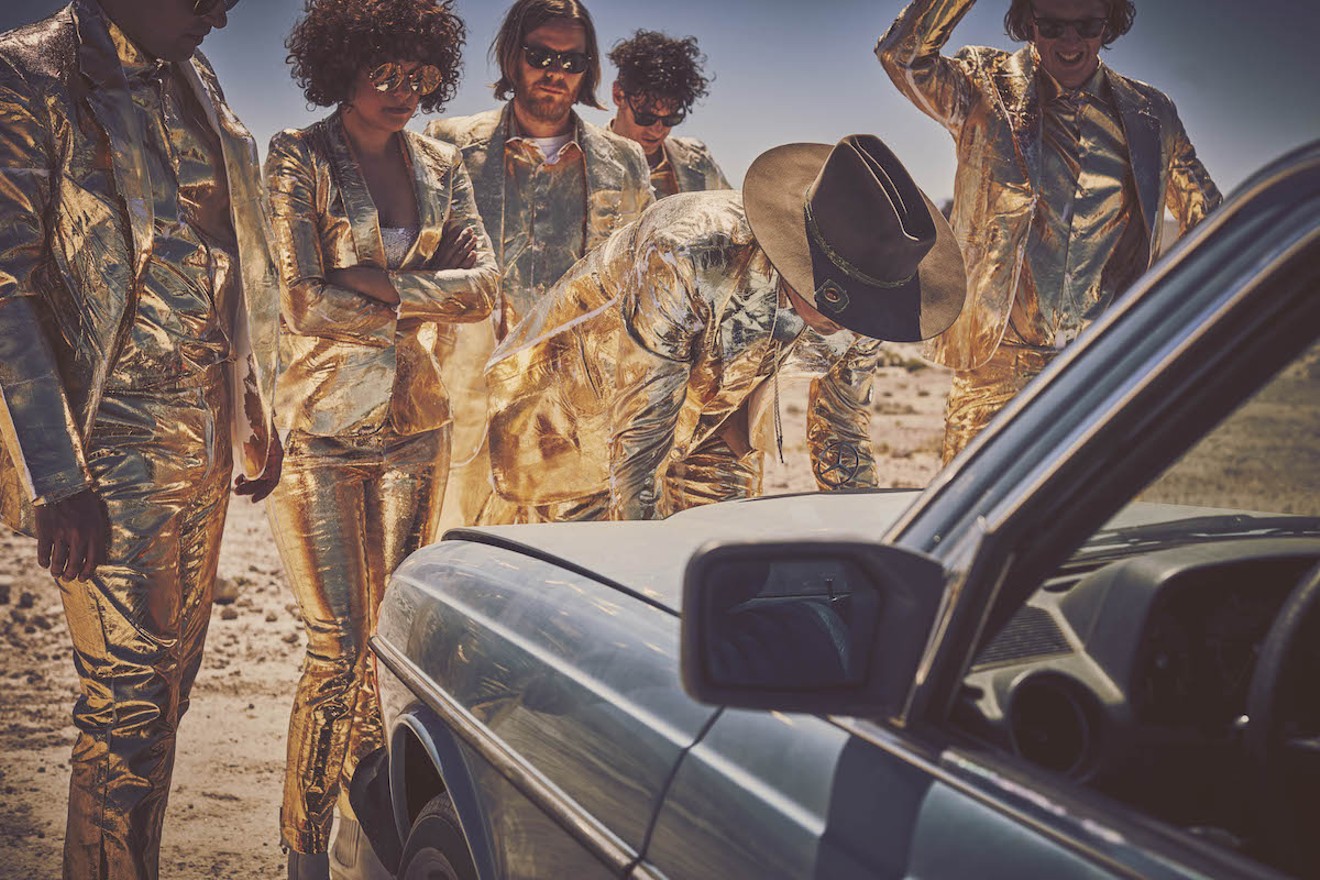 Last week, the French New Wave and modern-day Miami came together in a delightful way in the new Arcade Fire music video for the band's latest single, "Signs of Life." Directors Jillian Mayer and Lucas Leyva, whose names pop up alongside the band's name at the beginning of the video, deliver a work that's uniquely Miami and also ties into much of what they've done with their filmmaking collective, Borscht Corp. And though it might seem strange for a band that's not local to release a music video with a strong South Florida vibe, Leyva explains the collaboration actually began with a request from Arcade Fire's Win Butler.

"Win emailed us saying he liked Borscht and our work and wondering if we had any ideas for the song," he says. "And from the first time we heard the song — when I was at Cannes — to the time we delivered it was about a month. It came together really fast. It was crazy."

The only guideline he says they were given was that "Win was thinking about something with 'dark Miami vibes.'" The result is what many outlets refer to as a blend of French New Wave cinema and an episode of The X-Files, and Leyva confirms that description.

"The biggest influence was Pierrot le Fou. It's one of my favorite movies and definitely my favorite [by Jean Luc] Godard," he says. "We also directly ripped shots from a bunch of other things, including, but not limited to, Bande à Part, Une Femme Est une Femme, Shoot the Piano Player, Jules et Jim, and Vivre Sa Vie. The font itself it actually a custom font we made based on the font from Une Femme Est une Femme. In terms of aesthetics, those are the big ones."

But the pair wasn't trying to force Miami to look like Paris. There's a natural multiculturalism to the Magic City, and none of it is lost in the way the directors transpose New Wave aesthetics to what's in Miami. There's an airboat ride through the Everglades, shots of the leads racing through PAMM and MOCA (which were directly inspired by characters running through the Louvre in Bande à Part), and even costar Shariff Earp, who starred in Moonlight. Leyva says that Earp has a great presence and that he and Mayer had been wanting to work with him for some time.

"There's also the Creole sayings and, of course, we tried to do our Spanglish," he jokes about the intertitles that pop up between scenes. "It's the way I speak Spanish, which isn't really fluent, but it's Miami Spanglish. It's a specific cultural thing that people in Miami can appreciate, but I don't know if it translates for everyone else. But I guess there are subtitles for that."

Luckily, the band set no real limitations on what Leyva and Mayer could or couldn't do. "They were really open, and it wasn't like working with a traditional client. I think the fact that the band and their creative director knew our work already and knew what they were getting helped make it pretty smooth," he explains.

"Me and Jillian had retired from music videos a few years ago because we found that they have a strong capacity for heartbreak. You can fall in love with the ideas, and you feel like you get to be really creative, but at the end of the day, you're working for a client. And if they're not on the same page as you, it can be heartbreaking to have to make some of those changes to what has become your work."

The true limitation placed on them was shooting on 16mm, which Leyva says was always part of their pitch to the band. "When I went to Cannes — and I know it sounds superpretentious to say that — seeing stuff shot on celluloid gave it something else. It's not even a visual thing necessarily, and maybe I sound vibey and mystical saying this, but there is something else to it. And I think we wanted to get that energy and the feeling of French New Wave without it being French New Wave.

"And it's not just the look of it that's different, but the process of shooting. I forgot how spoiled I was by shooting almost everything digitally. On a digital project, you're shooting something in 4K resolution; you're seeing everything on the monitor exactly how it's gonna come out for the edit. You just let it roll and hope you get that one good moment in there. On film, you need to care about what the composition looks like on set because you can't reframe it later. You need to be disciplined about what you shoot because film is so expensive, and when you're rolling, you feel the money just slipping away. It forces you to be really thoughtful about things. It was a really fun experience, though, and I hope to shoot more on film."

While Leyva previously said he'd like to shoot more stories about the continued adventures of these two investigators played by Earp and artist Carly Mark, there's already a lot of fun stuff to spot in this video. The UFO in front of PAMM? "It's a fidget spinner shot in my living room," he laughs. "We wanted it to look enough like a fidget spinner where people who were about that fidget spinner life would know, but if not, you would just think it was some lo-fi UFO effect."

The poster modeled after Fox Mulder's "I Want to Believe" one from The X-Files? "It's a still from the 'Whoomp! There It Is' video that people on the internet think Barack Obama was in. How funny is it that people take these conspiracy theories so seriously?"

A lot of the fun stuff ties directly back into the collective and its oeuvre. Coral Morphologic's Colin Foord and Jared McKay, frequent Borscht collaborators, are featured as actors and with plenty of coral imagery as well. Leyva says, "I'm just so interested in them, and the imagery is so special that I want to share it with the world." There's also a speedboat named Lay'n Pipe featured in the last act, referencing February's Borscht Diez presentation about buying a speedboat instead of making a feature film.

Asked about whether there's some greater Borscht Cinematic Universe, Lucas admits, "There's a map that exists created by Andres Meza Valdes that ties all of the shorts together into one universe, and he knows how it works." Now that Arcade Fire's "Signs of Life" has joined the BCU, will Leyva and Mayer continue making music videos after returning from their retirement?

"No," Leyva says bluntly. "This is a band I love, and they approached us from a place of familiarity and gave us freedom. Unless it's something we're really passionate about in this way, I don't think we'll do it."