The world is ready to collectively say goodbye to the worst year in recent memory. Unfortunately, it's not as though when the clock strikes midnight, everything will go back to normal. COVID-19 is still very much a real thing, the economy is shit, and you're probably going to die alone.

Projecting aside, COVID-19 is still a threat, and you're not getting the vaccine anytime soon. So, while New Times cannot stop you from going out and partying on New Year's Eve, we can encourage you to stay at home. And let's not forget: Going out on NYE sucks! Prices are inflated, traffic is a nightmare, and clubs are full of amateurs getting sloshed on vodka-cranberry.

So if you are going to "fight" the government for your right to party, don't let it be on NYE — it's not worth it.

Luckily, NYE at home doesn't mean your only option is to tune in to Dick Clark's New Year's Rockin' Eve. Plenty of high-profile acts are skipping the IRL appearances and going virtual instead.

The Avett Brothers
Photo by Crackerfarm

Miami's musical taste certainly favors EDM and hip-hop, but if you're looking for something a bit more chill to ring in the new year, check out the Avett Brothers' virtual concert on Thursday, December 31. Broadcasting from Charlotte, North Carolina, the quartet promises a full performance, special guests, and a countdown led by Scott and Seth Avett. The band has been busy in 2020, releasing The Gleam III and performing a series of drive-in concerts, so expect plenty of new material and old favorites during the show. 8 p.m. Thursday, December 31. Tickets cost $40 for the HD webcast and $50 for the 4K webcast via nugs.tv.

Legendary Manchester nightclub the Haçienda emerges on New Year's Eve with a 24-hour bash that begins as soon as 2021 arrives in the Pacific at the International Date Line. Tune in for a performance by Haçienda Classical, led by DJ Graeme Park and musical director Tim Crooks alongside the Manchester Camerata, as well as Detroit icons Inner City and Chicago acid house pioneers Phuture. That's not all: Carl Craig, Danny Tenaglia, David Morales, Moby, and Peter Hook as also on the bill. 9 p.m. Wednesday, December 30. Streams for free via unitedwestream.co.uk.

Media giant and Google subsidiary YouTube will stage five localized New Year's Eve events — in Japan, South Korea, India, the United Kingdom, and the Americas. The Western Hemisphere will be blessed with a performance by Dua Lipa, J Balvin, YG, Karol G, and Kane Brown. Lipa's appearance will cap off an amazing year for the English pop star who released her sophomore album, Future Nostalgia, to critical acclaim, earning her a Mercury Prize and Grammy Award nominations. The nu-disco-influenced LP dropped right at the start of the pandemic, offering a much-needed escape, even if it was just you dancing and singing into a hairbrush in your bedroom. 10:30 p.m. Thursday, December 31. Stream for free via youtube.com.

Miami Beliebers were probably fed up with COVID-19 after Canadian singer Justin Bieber postponed his Changes tour, which would have stopped at the American Airlines Arena on July 21. But the Biebs managed to keep fans entertained throughout the pandemic by dropping several new tracks, including "Stuck with U" featuring Ariana Grande, "Holy" featuring Chance the Rapper, and "Lonely" featuring Benny Blanco. There's also the promise of a sixth studio album sometime next year. In the meantime, Bieber is teaming with T-Mobile to deliver the concert experience his fans were deprived of in 2020. It's free for T-Mobile customers to tune in, and $25 for everybody else. 10:15 p.m. Thursday, December 31. Tickets cost $25 via momenthouse.com; admission is free for T-Mobile customers.

Gays, rejoice! Your queen will descend from her celestial throne to deliver a spectacle like no other. Kylie Minogue released her 15th studio album, Disco, last month to positive reviews, with many critics praising it as a return to form for the Australian chanteuse. For her New Year's Eve special, "Kylie: Infinite Disco," she promises to transport viewers "through a parallel universe from solitary isolation to an alternative euphoric dance-floor community of togetherness." It's a rebroadcast from her performance in November, but this is a one-night-only thing — so if you didn't catch it back then, this might be your last chance. 9 p.m. Thursday, December 31. Tickets cost $20 via dice.fm.

Did 2020 deprive you of drag shows IRL? Are you praying for the day that Miami's best drag performers return to the stage during Double Stubble at Gramps? Well, New Years Queen might tide you over until then. The event promises 11 hours of entertainment with hosts on both the East and West coasts and a bevy of well-known queens, including Trixie Mattle, Alaska, Ginger Minj, Jujubee, Sharon Needle, and Bob the Drag Queen. There are also meet-and-greet packages for the performers if you want to ring in the new year with a personal encounter with your favorite queen. 6 p.m. Thursday, December 31. Tickets cost $50 to $500 via sessionslive.com.

Snoop Dogg (right) and the cast of Go-Big Show.
Photo by Jeremy Freeman/TBS

There is a 99 percent chance that if there weren't a global pandemic, Snoop Dogg would be celebrating New Year's Eve at some nightclub around Miami. This year, the rapper and TV personality has decided to stay at home in Los Angeles for an NYE special in partnership with his upcoming TBS program, Go-Big Show. Expect a live performance by Snoop himself, as well as DJ sets by DJ Cassidy, DJ Battlecat, and Fredwreck. Also set to make an appearance are Snoop's fellow Go-Big Show judges Rosario Dawson, Jennifer Nettles, and Cody Rhodes, as well as host Bert Kreischer. 11 p.m. Thursday, December 31. Stream for free via snoopnye.com. 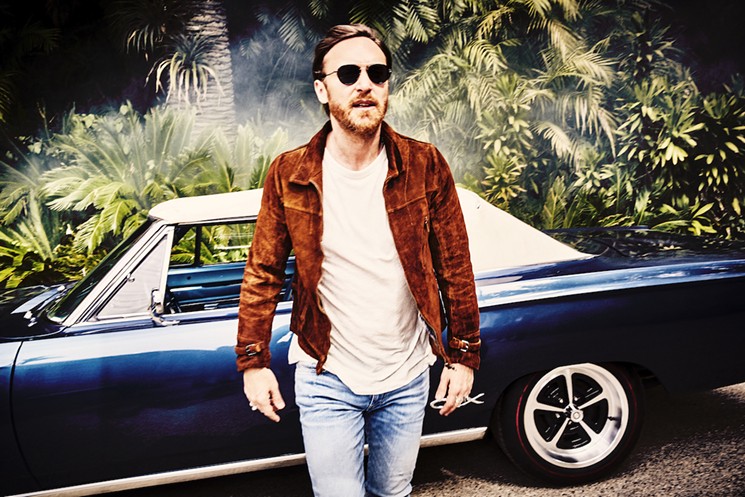 Belgian electronic music festival Tomorrowland is hoping to get the entire globe dancing under a single groove during its New Year's Eve bash. Twenty-five acts across four digital stages are expected to take part in the event, including David Guetta, Major Lazer, Tchami, Martin Garrix, and Charlotte de Witte. It's unclear how they will accomplish the livestream, but Tomorrowland promises that the event will start at 8 p.m. local time, no matter where you are in the world. So go into 2021 saying, "Fuck boundaries!" 8 p.m. Thursday, December 31. Tickets cost €20 to €50 via tomorrowland.com.

This year, K-pop megastars BTS and BlackPink found themselves dominating the Billboard charts, proving once and for all that mainstream American audiences are willing to listen to music in another language as longs as the beat is good. It's fitting that some of K-pop's biggest acts take a victory lap to cap off a record-breaking year. Weverse, the app by Korean entertainment company Bit Hit Entertainment, is bringing together its roster for the worldwide bash every K-pop fan will be clamoring to turn into. Enhyphen, Bumzu, GFriend, Lee Hyun, NU'EST, Tomorrow X Together, and, of course, BTS are all on the bill, with Western acts like Halsey, Lauv, and Steve Aoki thrown in for good measure. 7:30 a.m. Thursday, December 31. Tickets cost $47.61 to $57.23 via weverseshop.io.
KEEP MIAMI NEW TIMES FREE... Since we started Miami New Times, it has been defined as the free, independent voice of Miami, and we'd like to keep it that way. With local media under siege, it's more important than ever for us to rally support behind funding our local journalism. You can help by participating in our "I Support" program, allowing us to keep offering readers access to our incisive coverage of local news, food and culture with no paywalls.
Make a one-time donation today for as little as $1.