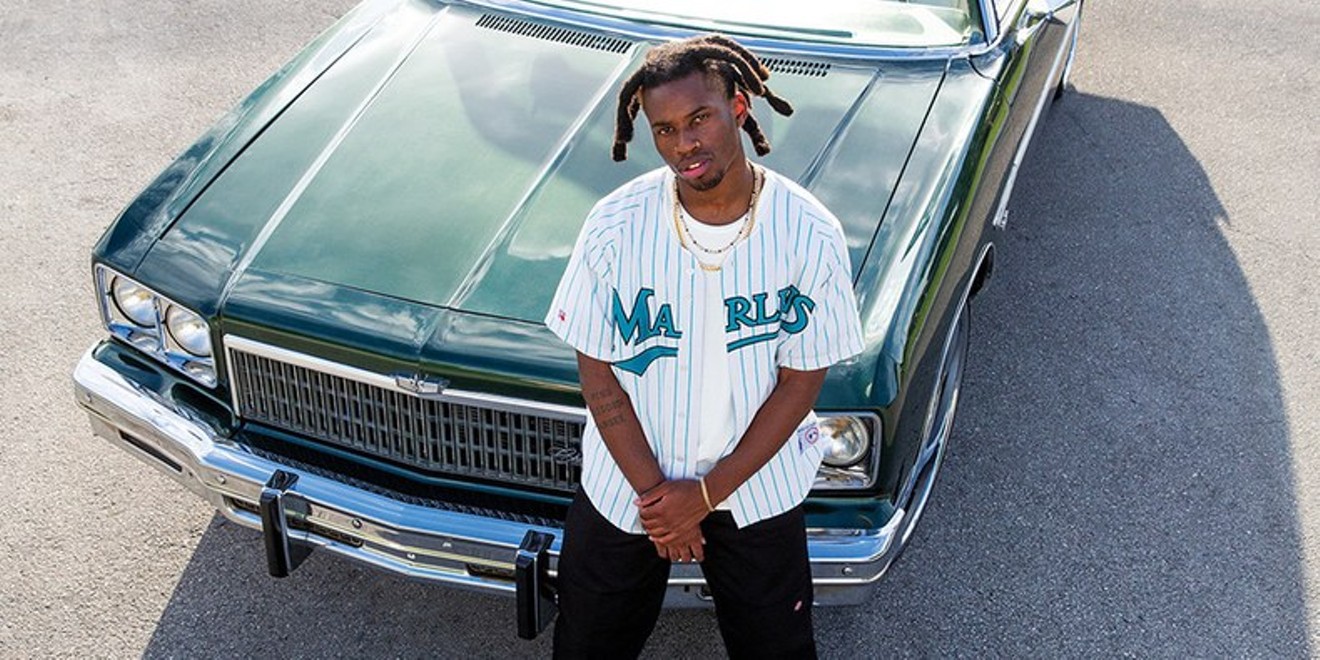 Denzel Curry in The Zuu. Julian Cousins
When it comes to describing Miami’s rap scene, "authentic" and "gritty" quickly come to mind. No matter which local artist you listen to, from Trina and her “bad bitch” aura to Rick Ross and his hustling mentality, the message is and always has been clear: Miami isn’t a city to fuck with.

But after Miami’s booty-bass era, the sound of the rap scene expanded — and became somewhat muffled. Though the scene continues to grow, it lacks a distinct sound other than unmastered vocals on bass-knocking beats. Unlike other major cities such as Atlanta and New York and coveted West Coast rap, it's hard to pinpoint exactly what Miami rap sounds like.

But now we have Denzel Curry, who sets a much-needed example with his latest album, Zuu.

Born in Carol City, Curry is no stranger Miami rap fans. After making his musical debut through creative clique Raidar Klan in 2011, music has come easy for the 24-year-old. His earlier projects Nostalgic 64, Imperial, and Ta13oo showed his lyrical growth and vivid storytelling skills that describe daily struggles and relationships. He often describes himself as “a real-ass nigga from the 305,” which makes Zuu’s Miami theme authentically him.

Zuu, Curry’s fourth studio album, clocks in at 12 songs, delivering just under 30 minutes of pure Miami ambiance. “I freestyled the whole thing. Went from mind to mic,” Denzel Curry says in an interview with HotNewHipHop. “The pen and the pad is the middleman if you already know what you’re going to say.” He gets his point across by rapping sharp metaphors with a calculated cadence on 305-influenced beats.

Listening to Zuu feels like driving down I-95 in a Donk with the windows down and wind in your hair and throwing your ass in a circle for maximum booty-bass impact. Although Curry moved to Los Angeles two years ago, Zuu is proof you can take the artist out of Miami, but Miami presence truly never leaves.

The project opens with “coming out the Zuu,” the title track that successfully sets the mood for the Miami-themed project. The Zuu, a common nickname for Carol City, a neighborhood in Miami Gardens, pays homage to the rapper’s hometown. Though the single is short, just over two minutes, it opens the door for those just entering Miami’s rap scene. Produced by FnZ and Jasper Harris, the track rides a trunk-rattling bass line, which prompts an steady involuntary head nod. Next, the album flows into “Ricky,” the first single off the project.

It's easy to become homesick after moving away from Miami, especially when all you know is your hometown. “Ricky” is a tribute to Curry’s father, Ricky, as the artist reminisces about many of the good times they've shared and life tips he passed on. He raps, “My daddy said, Trust no man but your brothers/And never leave your day ones in the gutter/My daddy said, Treat young girls like your mother/My mama said, Trust no ho, use a rubber.” The spirited single walks fans through his childhood, while the video, directed by fellow Carol City native Twelve’Len, depicts one of Curry's favorite childhood memories: boxing in a makeshift ring in a friend’s backyard.

Curry continues his tribute to Miami through “Wish,” a standout track featuring Miami artist Kiddo Marv. The track — filled with braggadocio and produced by Mickey De Grand IV, FnZ, and Charlie Heat — adds a soul influence and fluid delivery by Curry and Marv. With the noted sample of the B.B. & Q. Band’s “Genie,” it shows Curry’s music knowledge and experimental side, making the track deeper than just the Glock, gold teeth, and designer clothes he raps about. Curry also never passes up a moment to pay homage to his late brother, Treon Johnson; and XXXTentacion, who was fatally shot last year. “It's R.I.P. X and R.I.P. Tree/I'ma do it for my dawg, this for all of my G's,” he raps.

“Shake 88,” another notable track, promises to become a crowd favorite. (Curry himself said as much, tweeting, “Females love Shake 88.”) The high-energy banger sounds like modernized, 2019 booty bass with Rick Ross’ DJ Sam Sneak as a feature. The track opens with “Nothin' but tutti-fruity/Get on the floor if you got that booty, booty,” a sample from the second verse of “Stick That Thang Out” by Lil Jon & the East Side Boyz, signaling all the ladies to shake their asses. The beat drops, prompting a completely warranted twerking session to the chorus “She gon' shake that ass 'cause she only live once/She gon' smoke a blunt, then vibe to the front.” Searching “Shake 88” on twitter brings up handfuls of twerking videos to the summer playlist staple.

Zuu continues its Miami theme with features from even more staple Miami artists, including Rick Ross, Ice Billion Berg, and PlayThatBoiZay. While each artist brings their own interpretation of what Miami sounds like, their contributions all flow satisfyingly and cohesively into Curry’s conceptual album. Ross chimes in on “Birdz,” giving a nod to his “lil’ homie” as they carry the city on their backs.

Miami rapper PlayThatBoiZay makes his first appearance with Curry on "P.A.T.," Zuu's final track. In this ode to his older music style, Curry flexes how easily he can switch up his sound, catering to all types of hip-hop lovers. “P.A.T means Project and Turmoil. And is dedicated to Project Pat. And the Beginning of my career,” Curry explains on Twitter. The track features the screaming from Curry that his longtime fans know and love. Frankly, it wouldn’t be a Denzel Curry album without a reason to mosh.

If you’re curious to hear how Miami’s rap scene has evolved from its booty-bass era, Curry’s Zuu easily answers all questions. The album flexes diversity in flow, style, and delivery while proudly repping the 305. By allowing his personal growth and style to influence his take on Miami’s rap scene, Curry has produced an album that illuminates Miami in a light free of scandal, drugs, and spring breakers, and instead highlights the city as a diverse mecca on the map.
KEEP MIAMI NEW TIMES FREE... Since we started Miami New Times, it has been defined as the free, independent voice of Miami, and we'd like to keep it that way. With local media under siege, it's more important than ever for us to rally support behind funding our local journalism. You can help by participating in our "I Support" program, allowing us to keep offering readers access to our incisive coverage of local news, food and culture with no paywalls.
Make a one-time donation today for as little as $1.