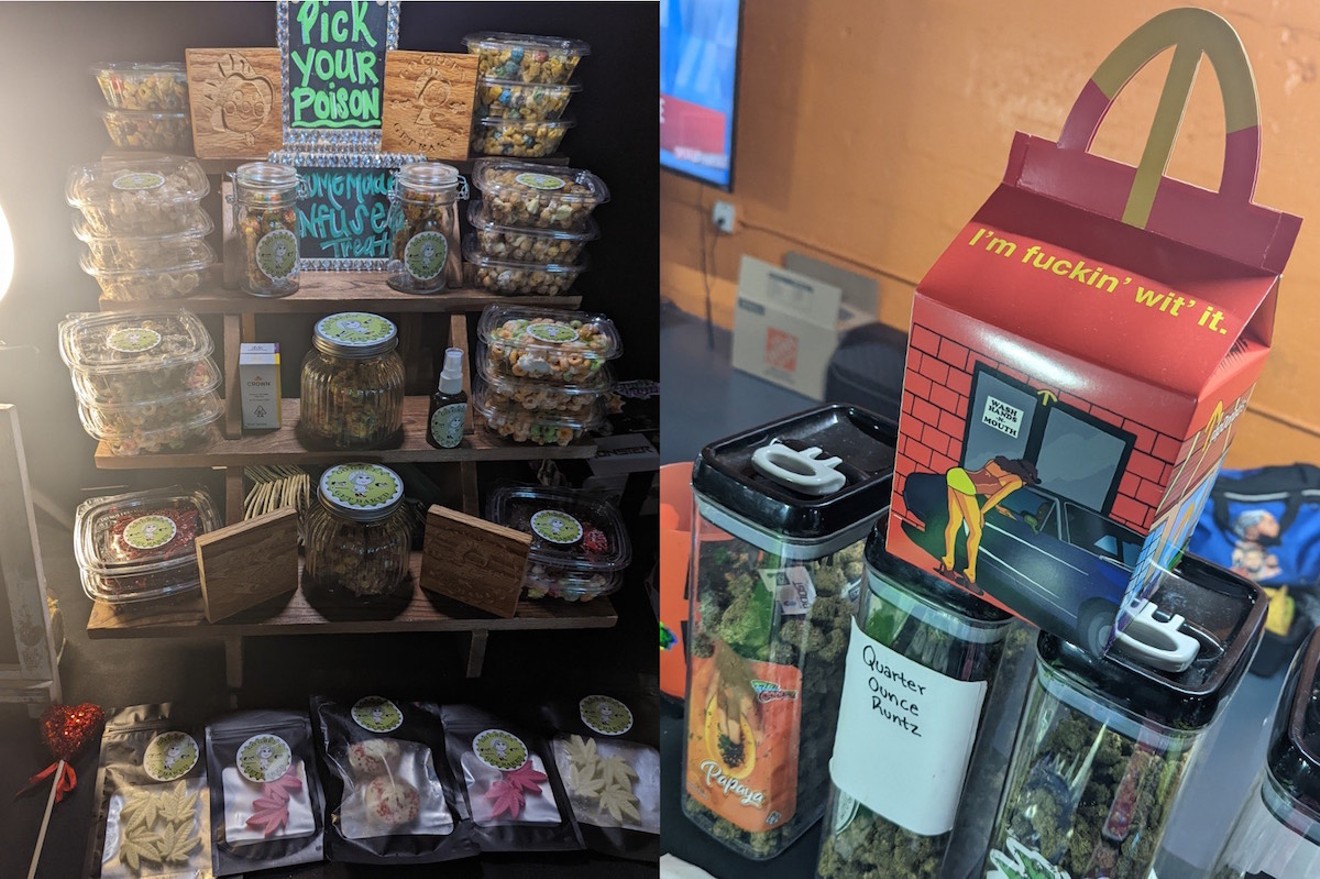 Vendors display dank desserts and a "Trappy Meal" for purchase Photo by Francisco Alvarado
It's Sunday afternoon, just hours before Super Bowl LVI kickoff, but in a darkened, one-story warehouse in Miami's Little River neighborhood, no one's thinking about football. More than a hundred people have gathered to browse dozens of stalls displaying an impressive array of cannabis goods. A fair-skinned dude with curly hair and a pubescent goatee stands beside a table lined with oversize bags of weed, cannabis concentrates, and marijuana gummies, cookies, chocolates, and candy.

Abruptly, he shoves a polyurethane bag as big as a king-size pillowcase in my face. It's filled with lime-green, orange, and purple marijuana buds that smell like cotton candy.

"This one is called Coochie Runtz," the young budtender explains. "If you like sweet-smelling strains, you gotta check this other one out. It's called Horchata — like the Mexican drink. It's my favorite one right now."

"We've got a really great deal going right now," he says. "We're throwing in an extra gram on anything you purchase. If you get a quarter [ounce] of the Horchata, I'll throw in an edible for free." 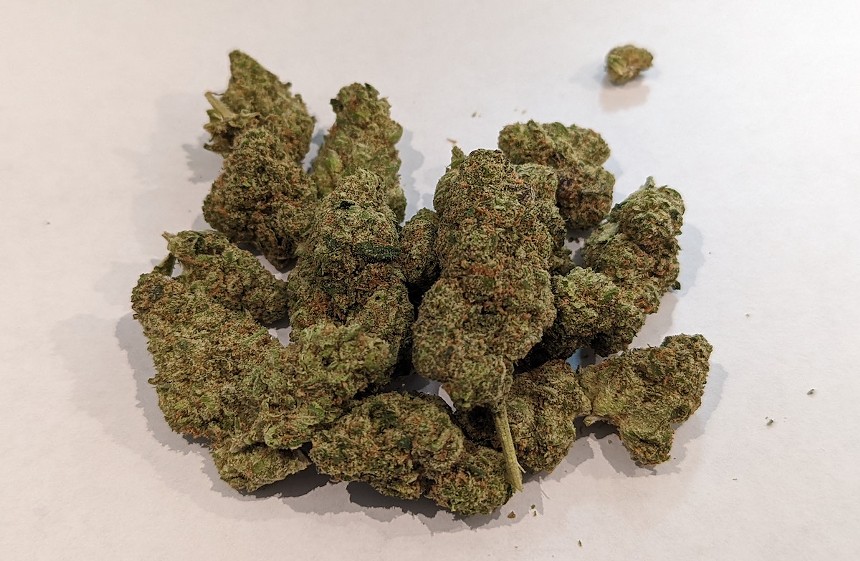 Horchata buds at Miami's marijuana bazaar
Photo by Francisco Alvarado
Every weekend, this roving cannabis bazaar pops up at various secret locations across Miami-Dade. It's part of a burgeoning underground scene that connects local weed connoisseurs with just about any combustible or consumable pot product, as well as magic mushrooms.

Though marijuana remains illegal under federal law, 18 states and Washington, D.C., have made marijuana fully legal for anyone 21 and older. But, after the Florida Supreme Court rejected recreational marijuana initiatives for the 2022 ballot, it seems full legalization won't be arriving in the Sunshine State anytime soon.

In the meantime, Florida residents who want to consume cannabis without breaking the law and risking jail time must obtain a medical marijuana card from a doctor, which grants them permission to buy from a small cabal — mostly made up of conglomerates — that comprises the state's legal market. Not only that, but medical marijuana patients can't buy pot inside Miami city limits because the city government has stubbornly refused to acknowledge that cannabis dispensaries aren't in danger of being shut down by federal authorities.

While legal cannabis sales in the U.S. are expected to surpass $30 billion this year, anyone caught trafficking marijuana in the black market still faces prison time: Under Florida law, anything in excess of 25 pounds is a felony and can get you three years, minimum, behind bars. At the federal level, a marijuana trafficker can get five years to life. According to a 2018 survey by the U.S. Sentencing Commission, Hispanic and Black people are disproportionately charged with marijuana trafficking. Moreover, Black Americans are more than 3.7 times more likely to be arrested for possession of marijuana than white people.

There are currently zero Black medical marijuana operators in Florida.

For these reasons, New Times granted attendees and vendors anonymity and won't disclose other identifying details regarding the weekly marijuana markets.

The weekly event is announced on Instagram by the organizers and the vendors.

To gain entry, the event's organizers require each attendee to submit photos of themselves and their ID via a direct message. Once you've been verified, you'll receive a message on the day of the event with that week's location. Admission costs $20, but you can save a few bucks by nabbing presale tickets on Eventbrite. 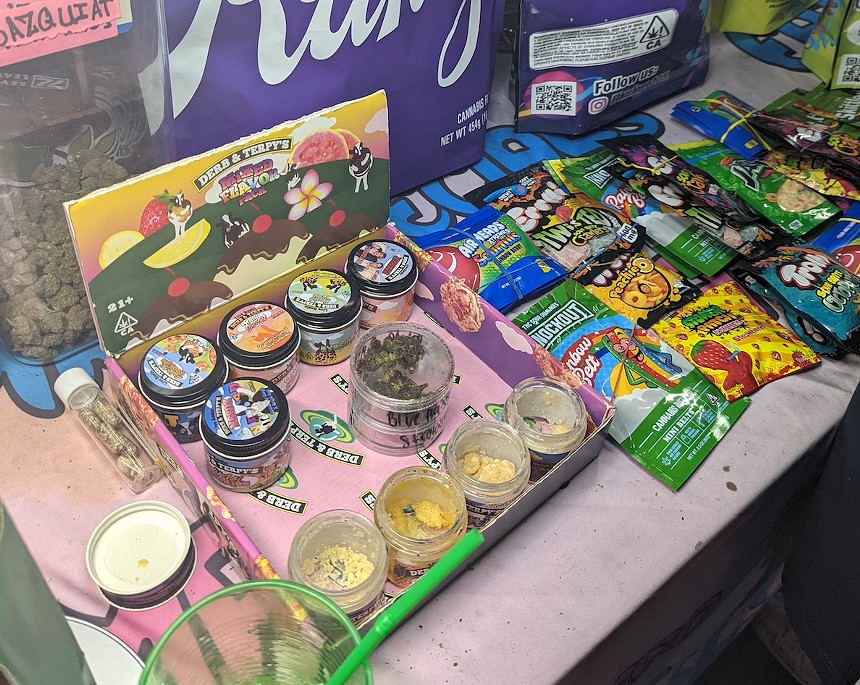 A vendor's display at Miami's clandestine marijuana market
Photo by Francisco Alvarado
At the Super Bowl Sunday market, roughly 100 people waited near the entrance before the warehouse doors opened at the start of the event.

James, a 24-year-old cannabis enthusiast, says he's been hitting the Sunday market and other similar gatherings since 2018. "I found out about them through word of mouth," he tells New Times. "The whole vibe is chill and the variety is out of this world."

He's not worried about the possibility of getting caught in a raid. "I haven't heard of any of these getting shut down by the cops. There's a vetting process and they are super-careful about who they let in."

Inside, vendors man rows of tables brimming with an extensive variety of dank buds, prerolled joints and blunts, cannabis concentrates, and weed edibles. Prices ranged from $25 to $50 for 3.5 grams of flower to $200 to $250 for full ounces. Some vendors offered magic mushrooms and mushroom edibles, too. Most accepted Zelle, Venmo, and Cashapp in addition to cash.

At one table, a young woman with curly black hair and round eyeglasses shows off more than a dozen Mason jars with each lid marked in black Sharpie with the name of a strain: Ethereum, Girl Scout Cookies, Lemon Cherry Gelato, and Basquiat, to name just a few.

She's also got a batch of fresh mushrooms illuminated by fluorescent light.

"Those are $30 for three grams," she says. "One gram will make you feel nice. Two grams and you will trip for a little bit. Three grams and you'll be tripping for hours."
click to enlarge 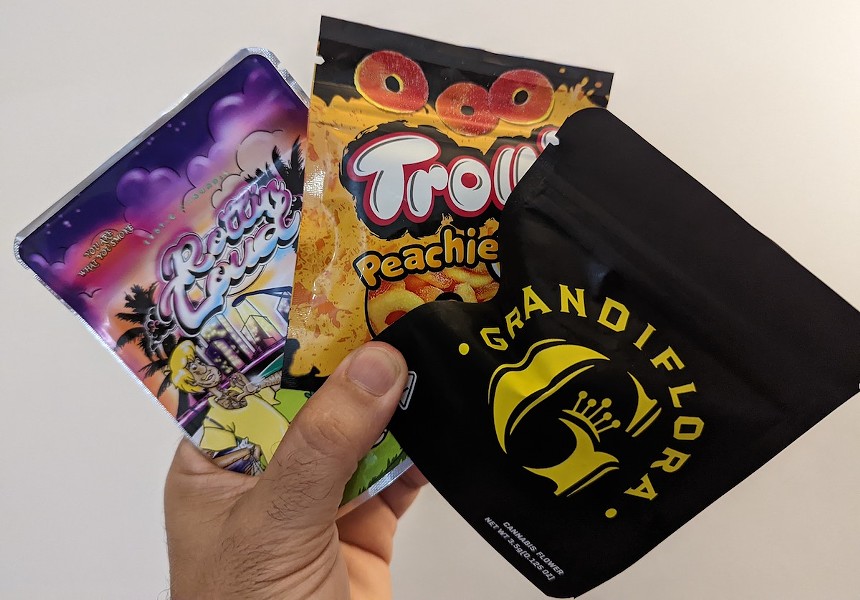 Bud and edibles packaged in branded, resealable bags at the Miami marijuana bazaar
Photo by Francisco Alvarado
At the next table, a tall Hispanic dude with slick black hair and stubble hawks some fruity-smelling bud in a resealable, branded bag. "It's my last ounce of this one, bro. A hundred dollars — You can't beat that price."

Another saleswoman with short brown hair picks up her marketing game, offering customers the chance to buy a "Trappy Meal." Shaped like a McDonald's Happy Meal box, the package features adult-themed illustrations, including a young woman in a tight miniskirt talking to a man in the passenger seat of a car. The phrase "I'm fuckin' wit' it" is stamped across the top of the box. For $100, you get a prerolled joint, 3.5 grams of bud, and a facemask.

Tucked in the back corner of the warehouse, a woman wearing a black hoodie sells homemade pot cereal treats, pot gummies, pot cupcakes, and cannabutter, ranging in price from $20 to $60. She's also got fresh-squeezed lemonade infused with a marijuana tincture for $10 a glass.

"I've been making treats for three years," she says proudly. "And I've been doing this event for the last two years. I love it."
KEEP MIAMI NEW TIMES FREE... Since we started Miami New Times, it has been defined as the free, independent voice of Miami, and we'd like to keep it that way. With local media under siege, it's more important than ever for us to rally support behind funding our local journalism. You can help by participating in our "I Support" program, allowing us to keep offering readers access to our incisive coverage of local news, food and culture with no paywalls.
Make a one-time donation today for as little as $1.