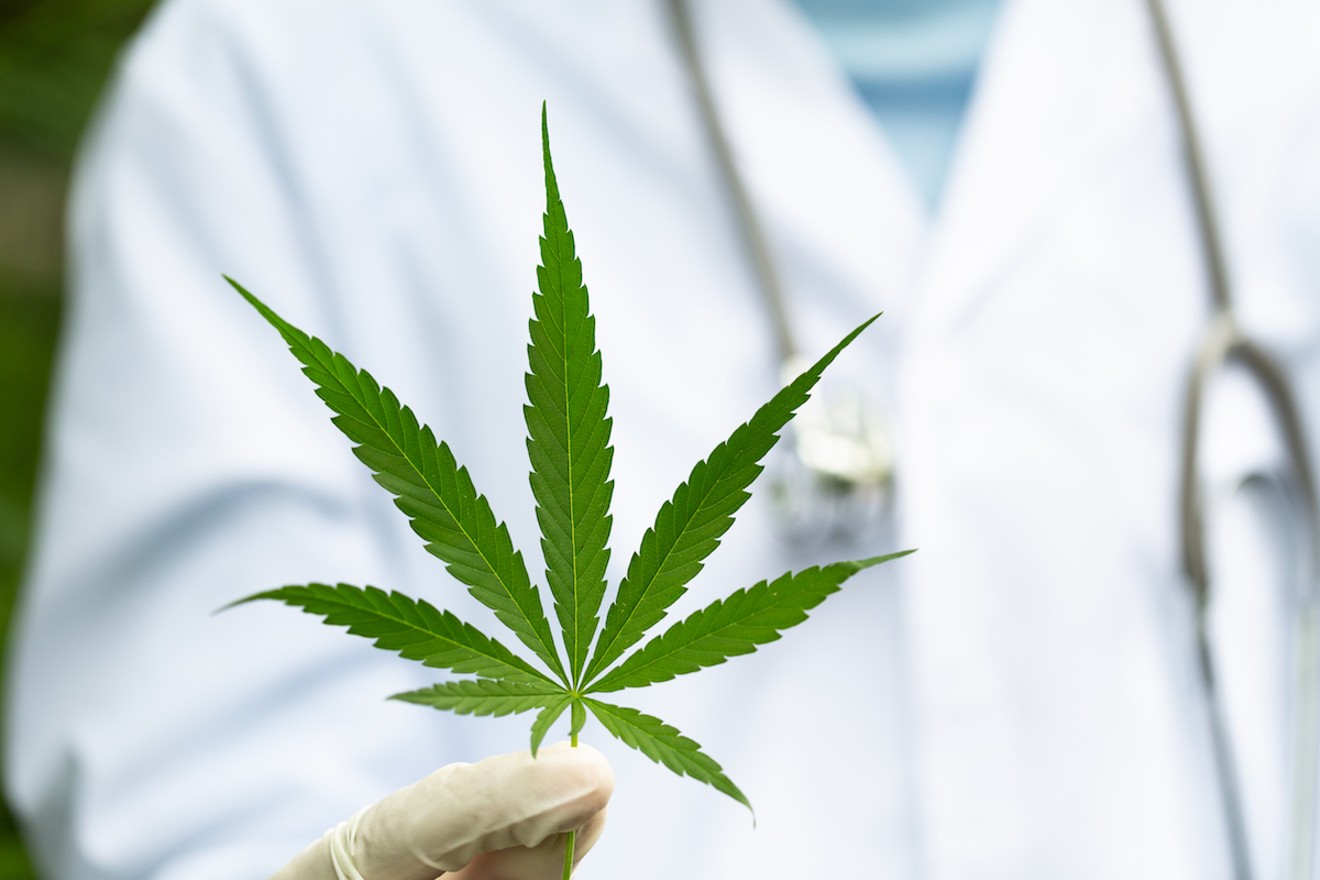 For years, eligible patients have been prescribed a medical marijuana card from any number of doctors in the City of Miami, despite having to go to another municipality to fill it. Photo by Kanjana Jorruang/Getty Images
Stoners and occasional tokers would likely agree that weed can make you a little slow — but not nearly as slow as the City of Miami when it comes to deciding whether medical marijuana dispensaries can operate within city limits.

This has created a curious conundrum: For years, eligible patients have been prescribed a medical marijuana card from any number of doctors in the City of Miami, say, at a Miracle Leaf medical center in Coconut Grove or a DoctorsRx in downtown, yet have had to tote their prescription to another municipality to fill it. For example, a resident can be prescribed medical marijuana in Coconut Grove yet have to drive roughly 3.5 miles away to Coral Gables to fill the prescription at the nearest dispensary.

Dr. Fernando Fandiño-Sende, a doctor at LifeCannMD in Miami's East Little Havana neighborhood, prescribes medical marijuana to treat patients with a number of conditions, including post-traumatic stress disorder, cancer, Crohn's disease, and epilepsy. He considers marijuana to be a "pharmacy in a plant," and says anyone supporting the City of Miami's dispensary ban is simply ignorant.

"This is the typical mentality of someone who doesn't know about science and wants to make an opinion without fundamental knowledge," Fandiño-Sende tells New Times. "Unfortunately, politicians don't understand because of marijuana's bad reputation."

All that might change next week, when a long-standing dispute between a would-be Miami medical marijuana dispensary and the city comes to a head at the Miami Commission's next regularly scheduled meeting on April 14 — just six days before the 4/20 celebrations commence.

The conflict dates back to 2019, when California entrepreneur Romie Chaudhari applied for a permit to open a medical cannabis dispensary at 90 NE 11th St., near the nightclubs Space and E11even in Miami's Park West neighborhood. The city denied Chaudhari the Certificate of Use permit he needed to open.

For the past three years, two entities managed by Chaudhari — MRC44, LLC, and 60 NE 11th, LLC — have been embroiled in a legal dispute with the city, which cites marijuana's listing as a Schedule I controlled substance under the federal Controlled Substances Act (CSA) as justification for denying Chaudhari the permit.

In 2021, the city's volunteer Planning and Zoning Appeals Board (PZAB) voted in favor of Chaudhari and overturned the city's decision, asserting that no part of the city code bans or limits dispensaries — a state requirement for a municipality to ban medical marijuana.

Miami's zoning director appealed the PZAB's finding, agreeing with Miami City Attorney Vicky Mendez's advice that medical marijuana should be prohibited in the city because it's prohibited federally.

The appeal was put on hold when MRC44 and 60 NE 11th, LLC, sued the city in circuit court, asking a judge to decide whether state or federal law prevailed.

The case was bumped up to federal court, whereupon U.S. District Judge K. Michael Moore promptly kicked it back down to the county level last September. Moore ruled that the city had failed to act under the provisions of Florida law by not writing an ordinance that regulates or bans medical marijuana dispensaries.

"[T]his case primarily involves the interaction between a municipality's failure to act and the operation of state law," Moore wrote in his ruling. "Given the significance of the City’s inaction under [statute] 381.986 (11)(b)(1), the Court finds that Plaintiffs’ right to relief depends largely upon the construction or application of the state law — not federal law."

In the meantime, Chaudhari's dual entities have paused their case in circuit court while they await the commission's upcoming April 14 decision on the zoning office's appeal on MRC44 and 60 NE 11th, LLC's application. The commission's decision will serve as a de facto ruling on whether a medical cannabis dispensary should be allowed inside city limits.

"The city simply hasn't done its job of deciding what to do with cannabis dispensaries. If they flat-out don't want this in the city, then what needs to be passed is a resolution or ordinance specifically banning it," Miami City Commissioner Ken Russell, who has a medical marijuana card, tells New Times.

If the commission sides with Chaudhari, Russell says, he will immediately begin the process of drafting and passing an ordinance to include dispensaries in Miami's code in order to regulate them in accordance with state law.

"I believe the long-term goal needs to be an ordinance that brings the best version of dispensaries to Miami," the District 2 commissioner says.

Attorneys for Chaudhari's businesses declined to comment to New Times for this story.
KEEP MIAMI NEW TIMES FREE... Since we started Miami New Times, it has been defined as the free, independent voice of Miami, and we'd like to keep it that way. With local media under siege, it's more important than ever for us to rally support behind funding our local journalism. You can help by participating in our "I Support" program, allowing us to keep offering readers access to our incisive coverage of local news, food and culture with no paywalls.
Make a one-time donation today for as little as $1.