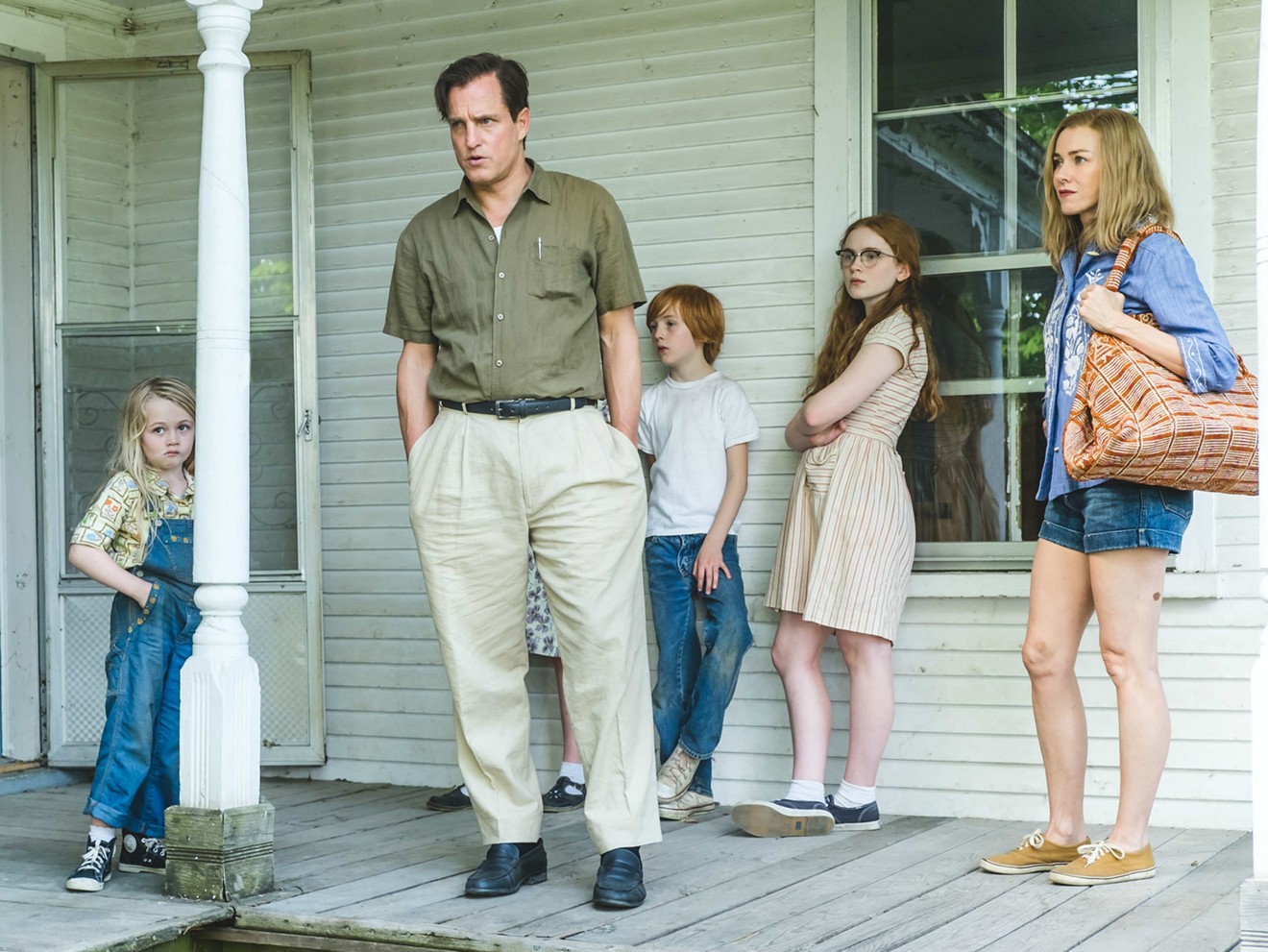 Woody Harrelson plays an itinerant dreamer/drunk of a dad in The Glass Castle. Jake Giles Netter/Courtesy Lionsgate
The dictates of Hollywood screenwriting can't quite constrain the wildness of Jeannette Walls' family and her best-selling memoir. Despite a tidy resolution, too many scenes whose shapes are immediately familiar from other movies, and an absurd climax that dramatizes the conflict between a daughter and her father through the wheezy beats of a romantic comedy, Destin Daniel Cretton's adaptation of Walls' book of the same name just often enough bursts to raucous life. Here’s an itinerant dreamer/drunk of a dad (Woody Harrelson) blasting the station wagon across desert scrub to teach his kids the lesson that they’ll learn more from him then they will in any school — why, check out these juniper and Joshua trees!

Here’s a hippie-painter mother (Naomi Watts) dashing out of the car to sit before one of those trees and capture it on a canvas, moved by its resilience, certain that her four children will be just fine camping tentless in the wilderness so that she can chase her epiphany. Here’s that dad, again, tenderly removing bandages from tiny Jeannette (played in flashbacks by a succession of actresses), revealing the skin she burned when she caught fire cooking hot dogs in the house they had been squatting in. The family’s on the lam, fleeing social workers, but what could be better than the campfire and the madness and the silent horizons the size of God? What could be better than Harrelson’s Rex Walls calling Jeannette “Mountain Goat” and insisting “You learn from living — everything else is a damn lie”?

Not much. At its best, this Glass Castle brushes up against the rich complexity of lived experience. It’s the rare star-driven crowd-pleaser smart enough to present more than one idea onscreen at a time, a paean to but also warning against cussedness that manages to exhibit some of its own. We see the Walls shove off to West Virginia, always just one step ahead of whoever’s running out of town. In the mountains they buy a shack that Rex plans to build into a see-through palace for his off-the-grid clan. Problem is he talks big but drinks bigger, and while the kids go days without eating, Rex — so outsize an American crank that he might hail from Look Homeward, Angel — vanishes with the family’s last couple of bucks and comes home soused and so beat up that Jeannette has to give him stitches. That night, Jeannette (now played by Ella Anderson, a young actress possessed of great focus and emotional acuity) turns his wheedling bullshit against him. He promises her he’d always do anything for her. She asks, with trembling strength, if he’d quit drinking. Harrelson, too, is excellent in these scenes, a wounded child in a man’s body, ashamed of what he’s become but also in love with his own surly wickedness.

Studio films rarely convincingly capture backwoods poverty with anything like verisimilitude, but almost everything here looks right: the pile of trash outside that swells with the years; the secondhand books and clothes; the minor improvements as the shack becomes a home but also the inescapable dinginess as Jeannette grows older and that home becomes a prison.

Nearing her teens, after witnessing and getting caught up in a violent episode between her parents that came on like a squall and might shred your nerves in the theater, Jeannette and her siblings vow to get out.

Something like two-fifths of the movie occurs years after her escape. Jeannette, played with coiled wariness by Brie Larson, has become the celebrated Intelligencer columnist at New York magazine, and she’s engaged to the very embodiment of everything her father raised her to stink-eye: an investment banker. (Max Greenfield, bringing warmth and specificity to a role as nuanced as a vintage editorial cartoon’s sash-wearing plutocrat.) It’s 1989, Jeannette’s parents have come to the city to squat in a tenement and rail against her choices, and this adaptation is more simple-minded than in its flashbacks. These scenes evince a self-consciousness that the coming-of-age material doesn’t: The movies have taught us to read Jeannette’s gig and ’80s couture as somewhat villainous, a betrayal of the dreams of the father who so often betrayed her. It’s beyond the capabilities of screenwriter and director to suggest that her childhood — her yearning for New York, her dreaming over books, her willingness to stand up to the wealthy and powerful — is part of why this self-invented talent was so very good at her job. Instead, the movie acts as if gossip columnist is something that all decent people know one simply shouldn’t be, and Jeannette gets shamed into being her better self like a Barbara Stanwyck heroine might.

Larson does what she can, and is moving when shouting down her father, but she’s tasked with too much silently dramatic decision-making in sequences radically, dopily condensed from Walls’ book and life. That said, one scene in the film’s uncertain present erupts into full messy raucous family-makes-you-crazy life: Rex, in his squat, challenging the investment banker to arm-wrestle. Walls’ book will touch and surprise you consistently; the movie manages it a couple of times a reel.