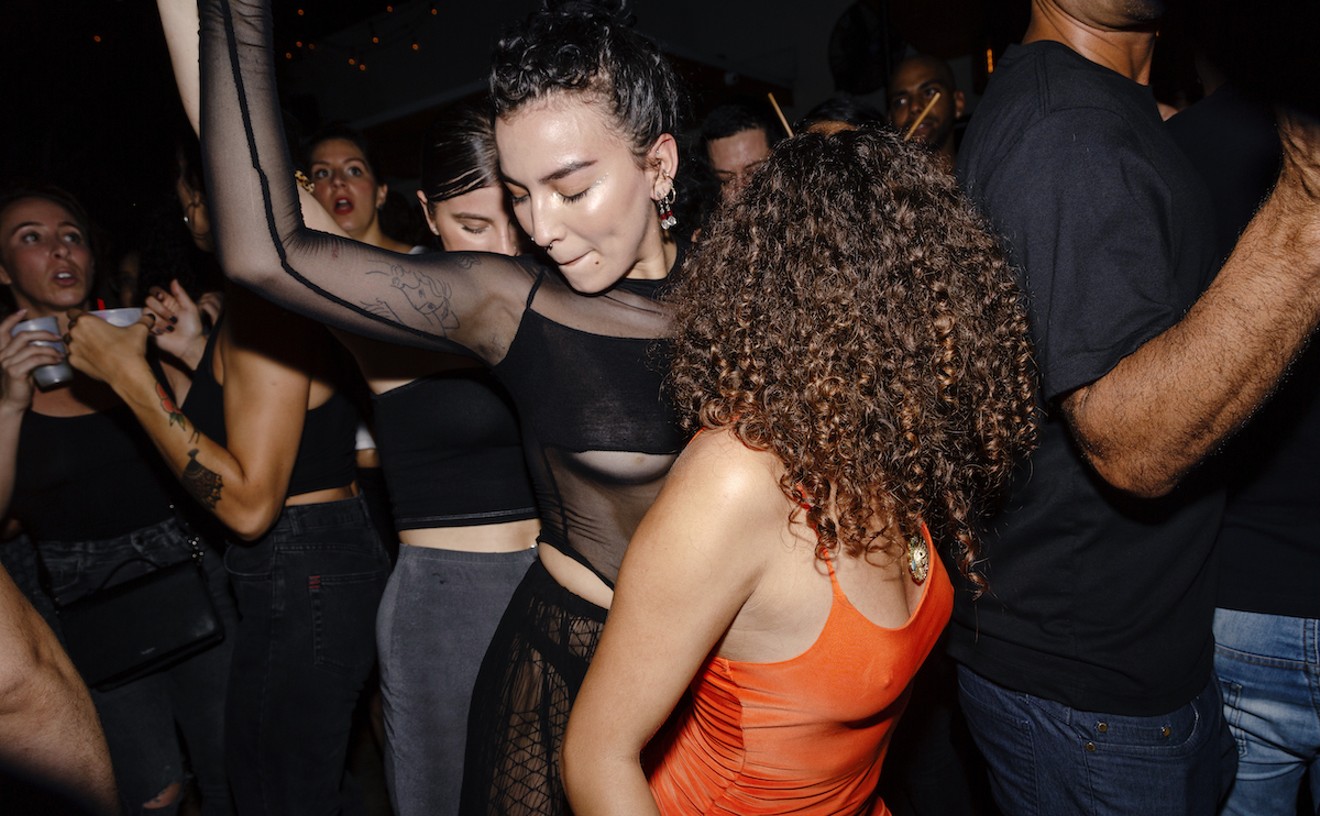 Event promoter Out of Service Miami puts on one of the city's most lit recurring parties. At 1306, El Perreo follows a reggaeton-only format helmed by DJs Pazmal, Coffintexts, and Raiden. Guests are encouraged to show out with their glitter lip gloss, hoop earrings, gelled hair, and low-rider jeans. The party doesn't follow a regular schedule, but with some of the most original and hilariously branded promo materials in recent memory (to attend its "El Perreo College: School of Reggaeton" party, guests had to RSVP by filling out an "application" on a website mimicking that of Miami Dade College), Out of Service turns out huge crowds ready to throw that ass back accordingly.

Online dating has taken the art of womanizing to a whole new level, but if you prefer face-to-face interaction from the outset of courtship, Sugar, a bar and lounge on the 40th-floor rooftop of the East hotel, can help you put your pickup skills into practice. Charming, successful, confident women visit this hideaway in the heart of Miami's Brickell neighborhood for its fun and laid-back atmosphere each evening of the week. With panoramic views of the Miami skyline and a lush garden surrounding the bar, you can walk away with a couple of new phone numbers or — if you meet someone really special — enjoy a dinner date of Asian-inspired tapas and delicious signature cocktails. Hours are 4 p.m. to 1 a.m. Sunday through Wednesday and 4 p.m. to 3 a.m. Thursday through Saturday. 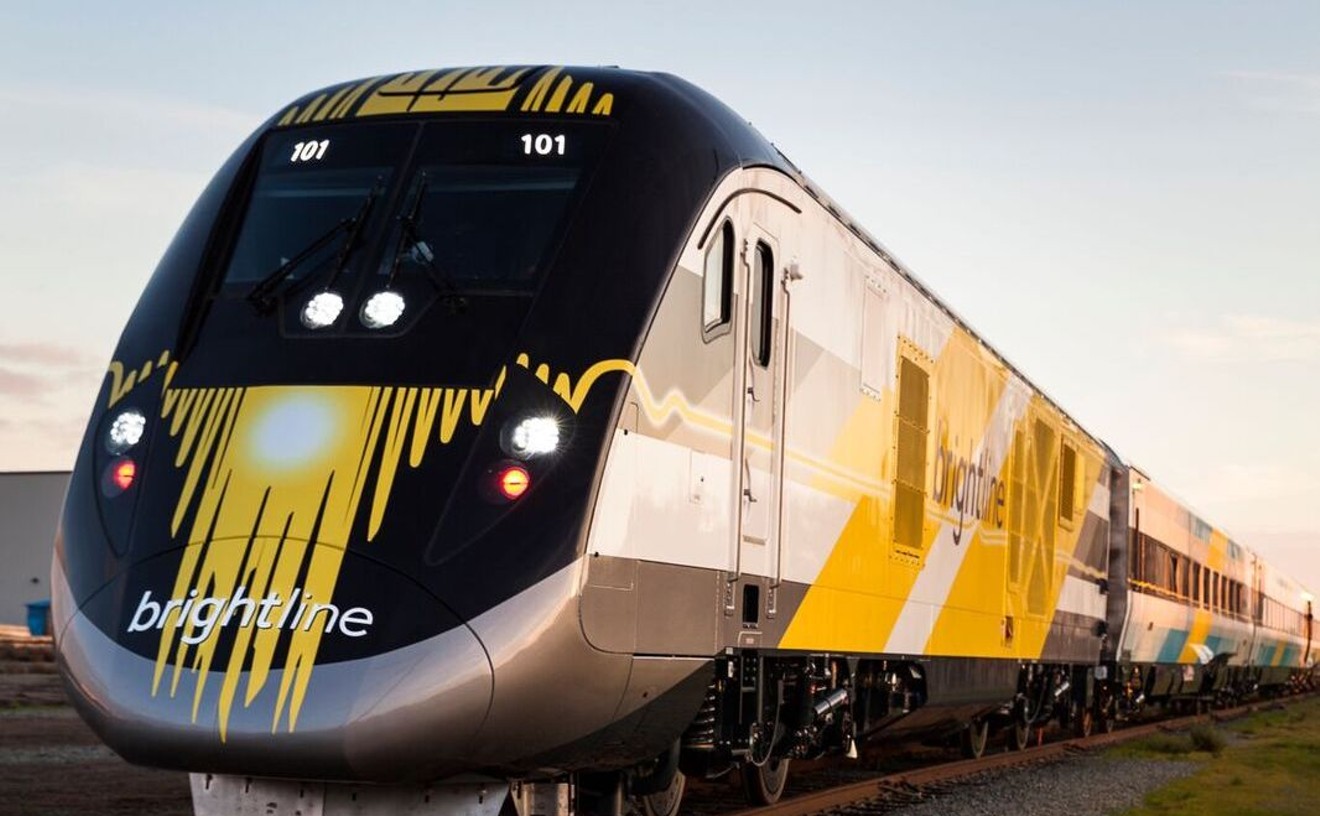 A speedier commute is the most obvious reason to ride the Brightline express train connecting Miami, Fort Lauderdale, and West Palm Beach. But when you book your next ride (starting at $17), know that you might just be purchasing a golden ticket to the relationship of your dreams. Brightline stations are comfortable, airy, and bright, easing nerves when you're breaking the ice. You'll have a plentiful and diverse pool of potential candidates to choose from, so make sure you're paying attention when one of them glances up from that cell phone or laptop. Another pro of making this your new place to meet single men: There's no need to go anywhere else for a drink: The Brightline offers passengers a list of libations for purchase. 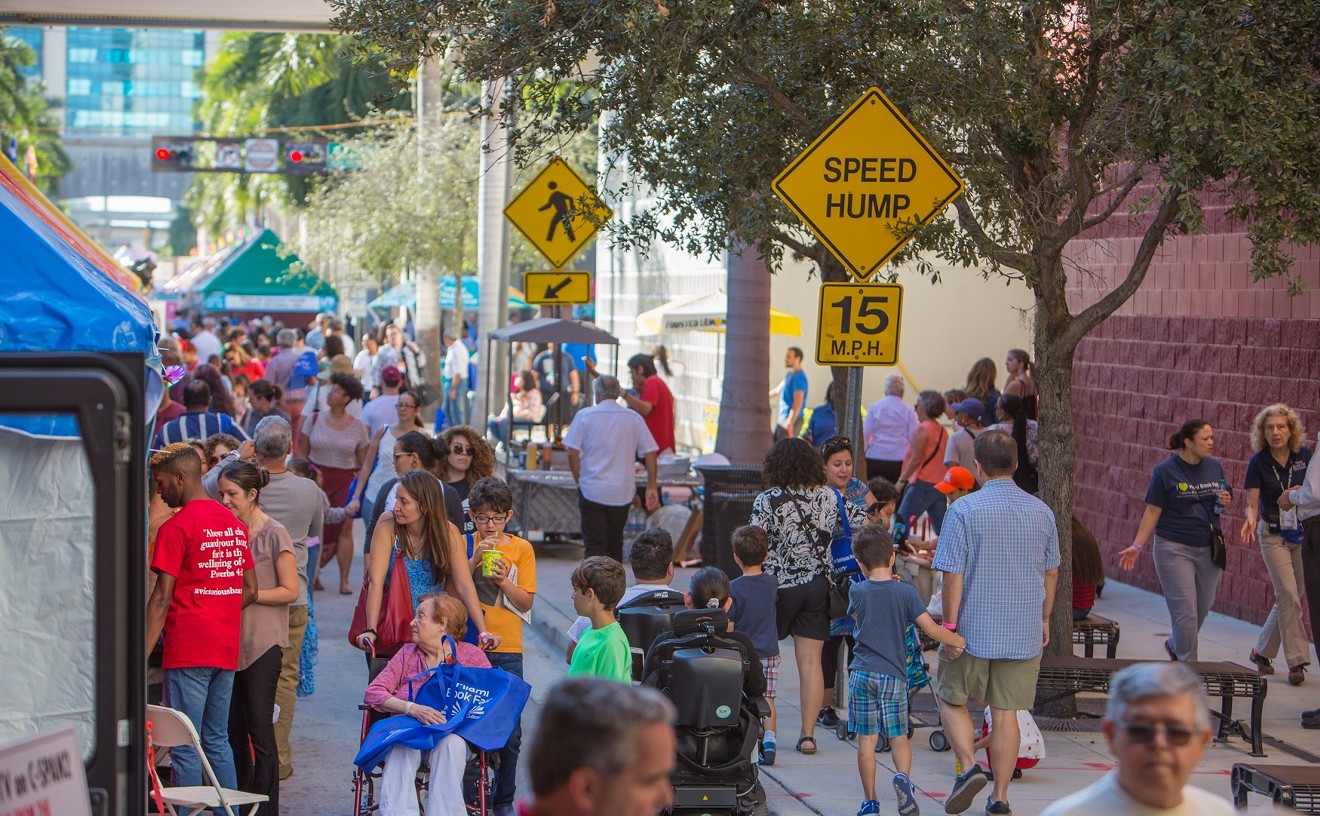 Are you being shunned from your workplace book club because they found out you were listening to this month's selection on audiobook? That's the 305 bibliophile pride talking. Some of y'all were raised in cities without an eight-day literary festival, and it shows. Miami is home to the largest book fair in the nation, drawing hundreds of thousands of book nerds every November for a jam-packed week of events. From readings and discussions with world-renowned authors to the highly anticipated Friday-through-Sunday street fair, the Miami Book Fair is a spectacle that can't be missed. It's safe to say Miami is experiencing a renaissance of sorts when it comes to arts and culture. But the real OG is the Miami Book Fair. 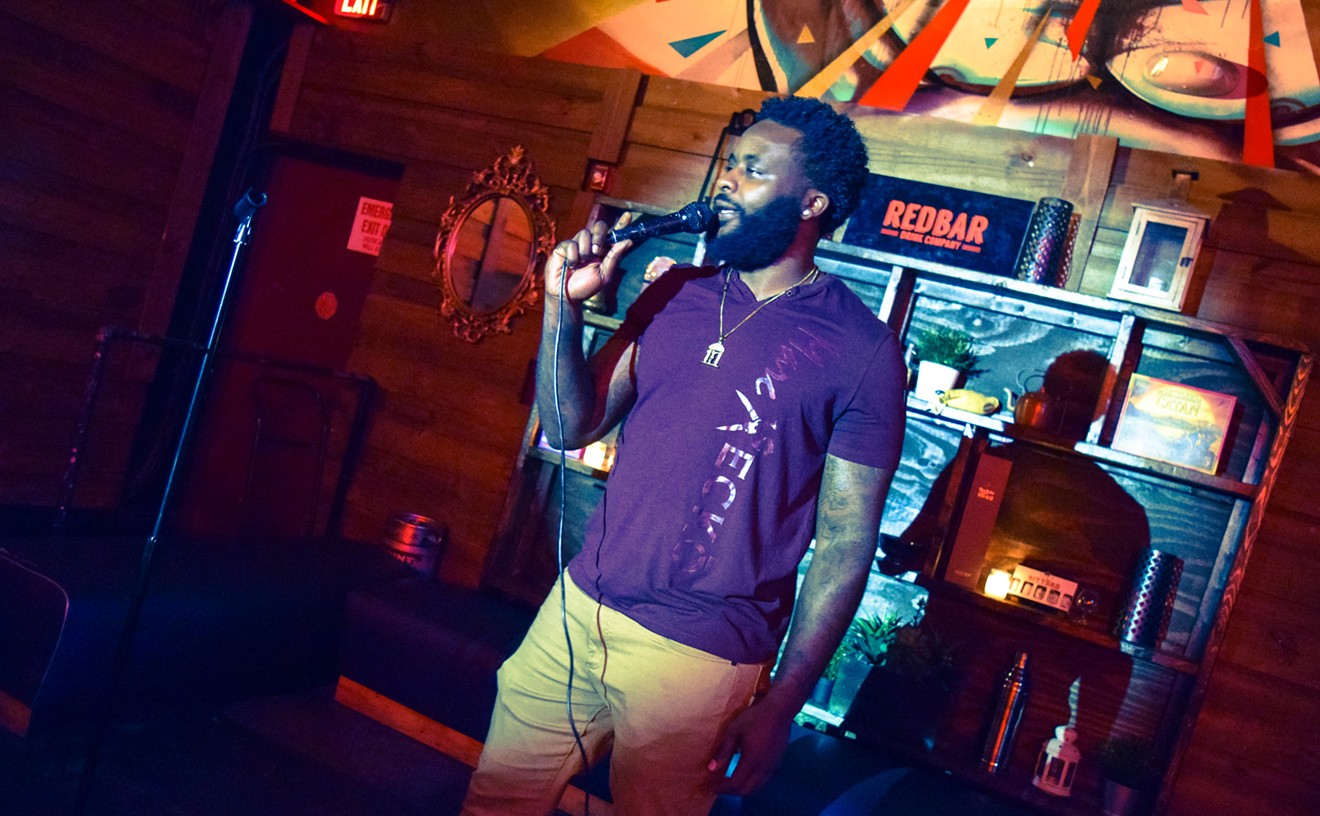 "But it's my birthday," comedian Rudy Wilson says, mimicking a pintsize heckler celebrating his special day at a Monday-night show. "Don't blow out the candles because it's my birthday." Since transplanting from Washington, D.C. about a year ago, Rudy Wilson has become a Miami favorite. Whether he's hosting a small show in Wynwood or performing at the new Miami Improv in Doral, Wilson oozes confidence onstage. At a recent show, he performed his entire set acoustically after the house's only microphone shattered to pieces. What followed was ten minutes of raw comedy. Imagine Def Comedy Jam by way of MTV Unplugged. It's clear Wilson understands — as all professional entertainers do — that no matter what happens, the show must go on. 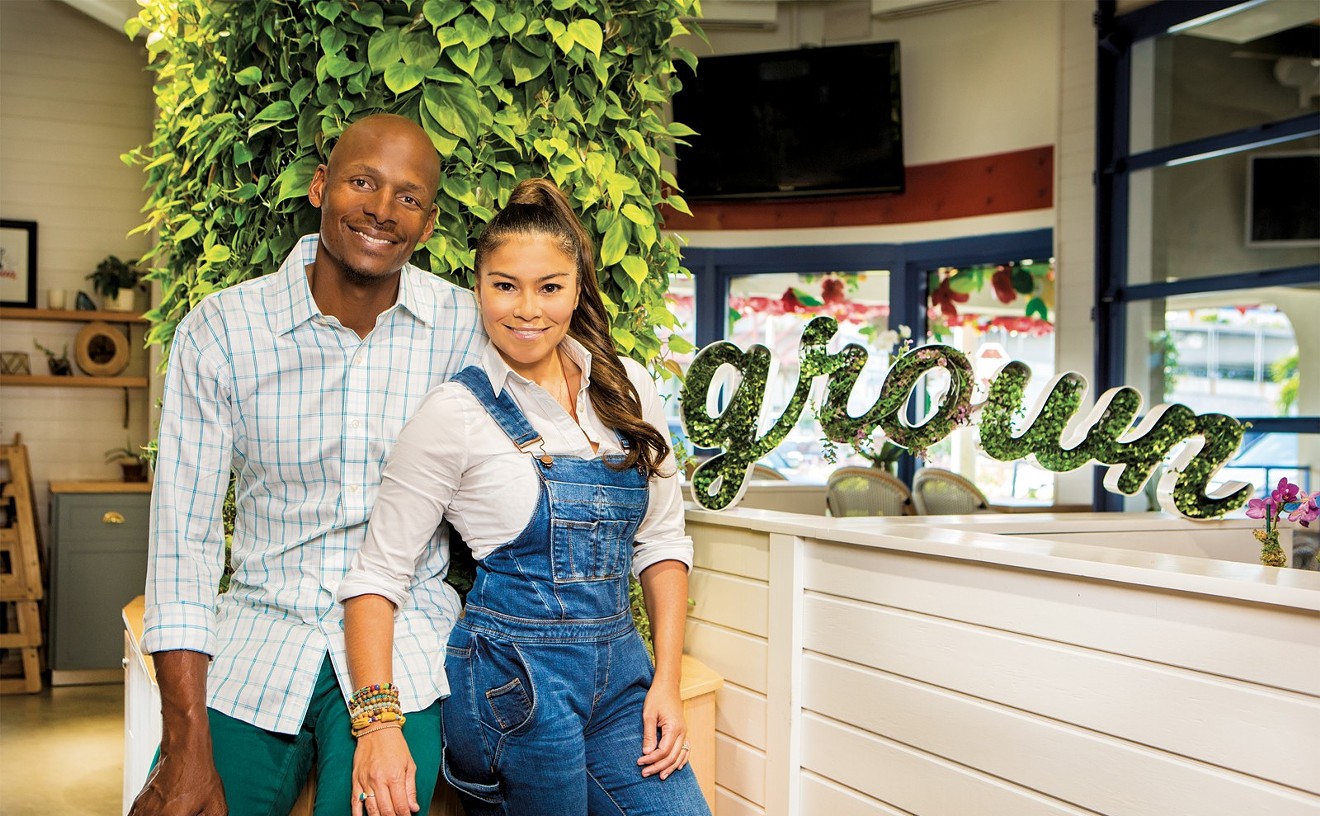 During former Heat player Ray Allen's illustrious career in the NBA, his wife Shannon became a pro at whipping up healthy food to fuel his game. When he retired, the couple turned her years of cooking experience into a family business: a fast-casual restaurant that serves healthy organic fare. Their company, Grown, has expanded quickly since its 2016 launch and today has multiple locations and a Walmart partnership. Together since 2004 and married since 2008, Ray and Shannon manage the restaurant chain alongside their busy family life. They have five kids, including a son whose type 1 diabetes makes healthy eating all the more important. It's also turned the two into activists in the diabetes community. They've held fundraisers for the Diabetes Research Institute and nonprofits that research the condition. They've been advocates, whether by appearing in commercials warning about the symptoms or by testifying in front of Congress in support of additional research. The Allens deserve credit for making Miami a healthier place. 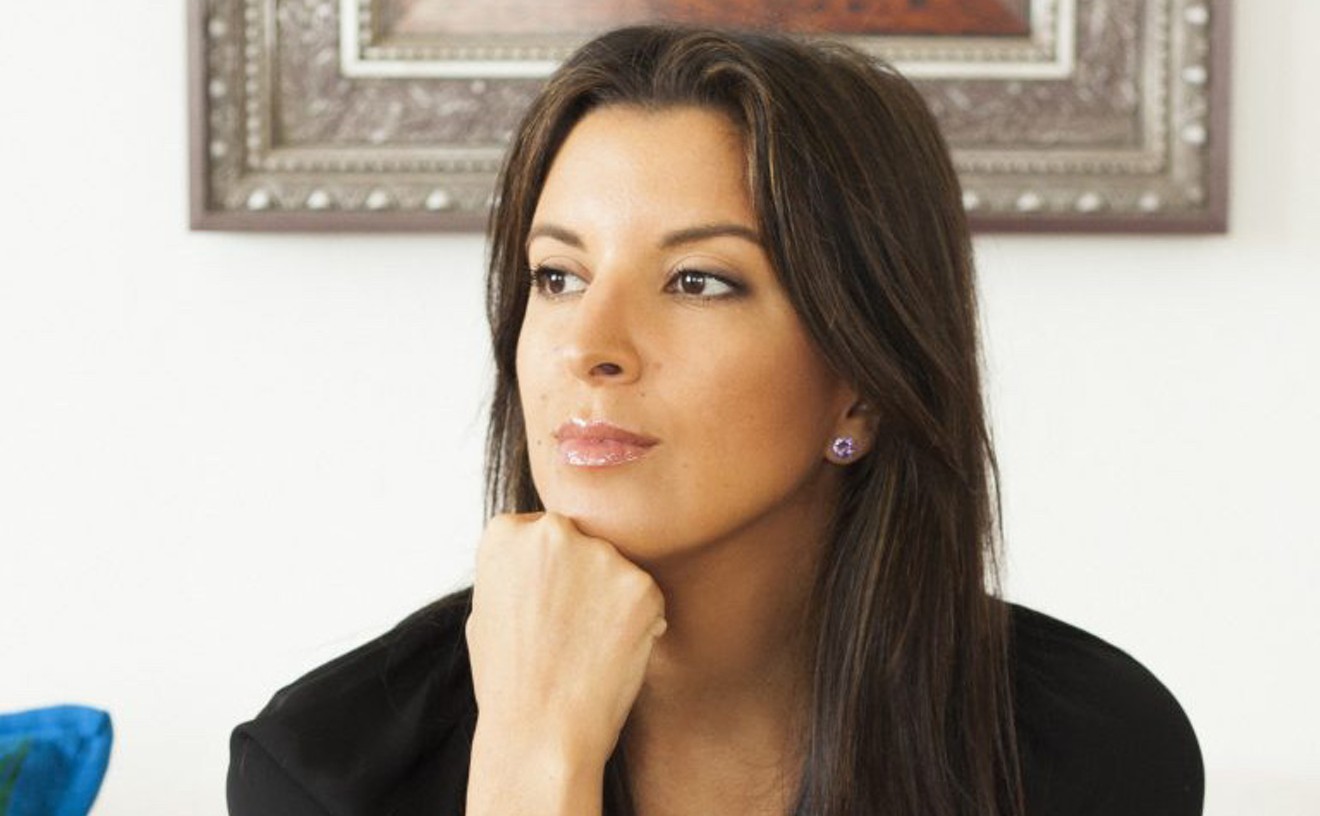 To read Patricia Engel is to be transported. Simply take the first line of her most recent novel, The Veins of the Ocean, and you'll understand: "The Rickenbacker Bridge suspended across Biscayne Bay was full of night fishermen leaning on the railings, catching up on gossip over beer and fishing lines, avoiding going home to their wives." Born to Colombian parents, Engel grew up in New Jersey and earned a master of fine arts at Florida International University, making her a transplant that not only stayed but also has made Miami's literary scene proud. The Veins of the Ocean won the 2017 Dayton Literary Peace Prize, and she's also the author of It's Not Love, It's Just Paris and Vida. Most recently, though, it's her astounding Guggenheim Foundation Fellowship win that has the literary world kvelling. In her spare time (how, though?) she acts as the literary editor of the Miami Rail and is a writing professor at the University of Miami.

Everyone Who Took a Buyout

The postrecession economy has not been good to the Miami Herald. Neither have the business decisions of the Herald's parent corporation, McClatchy Newspapers. The Herald has endured wave after wave of layoffs and budget cuts in recent years. But at the same time, the pay of its executives has remained exorbitant: While McClatchy was announcing company-wide buyouts this year, CEO Craig Forman was negotiating a new contract that gave him a $35,000-per-month housing stipend on top of his already massive salary. In the meantime, tons of veteran Herald reporters voluntarily took buyouts, including Guantánamo Bay reporter Carol Rosenberg, who arguably knows more about America's illegal Cuban prison than anyone else on Earth. (Thankfully, she's still covering the beat for the New York Times.) Here's to the folks who put in hard work every day covering the city, only to get booted out the door as a final gesture. Your work was worth it.

Erika Carrillo does something that's oddly rare in local TV circles: She covers city politics closely. A lot of folks in the TV world are known for being wooden, gullible stooges willing to report whatever the hell some local police department or mayor's office wants. Not Carrillo. When politicians see the Univision reporter approaching, they know they're in for a grilling: Carrillo recently cornered Miami-Dade County Mayor Carlos Gimenez on-camera and asked him why he flew to China for "research" alongside a bunch of lobbyists and consultants who certainly seemed like they didn't belong. Carrillo's reporting has also had serious impact over the years: In 2016, she caught then-Miami-Dade Commissioner Juan Zapata using public money to pay for his Harvard tuition. And last November, the City of Sweetwater presented her with an award to honor a police-corruption series she authored that wound up getting a few cops arrested. There's a reason Erika Carrillo has won eight Emmy Awards.

Jackie Nespral gets Miami. Unlike many TV (and print) reporters, she's local — she grew up in Little Havana, earned degrees from the University of Miami and Florida International University, and got her start on Univision's Sábado Gigante before working her way up at the network. Her next major move came in 1991, when she landed a job on NBC's Today and became the first Hispanic-American woman to anchor a major cable news show at the age of 26. Since then, she's moved back home and now hosts WTVJ's Sunday affairs program, NBC6 Impact, where she regularly lobs tough questions at lawmakers. During the 2018 gubernatorial race, Nespral sat down with candidates Ron DeSantis and Andrew Gillum for 20-minute interviews and forced DeSantis to at least answer why he said Gillum would "monkey up" Florida.