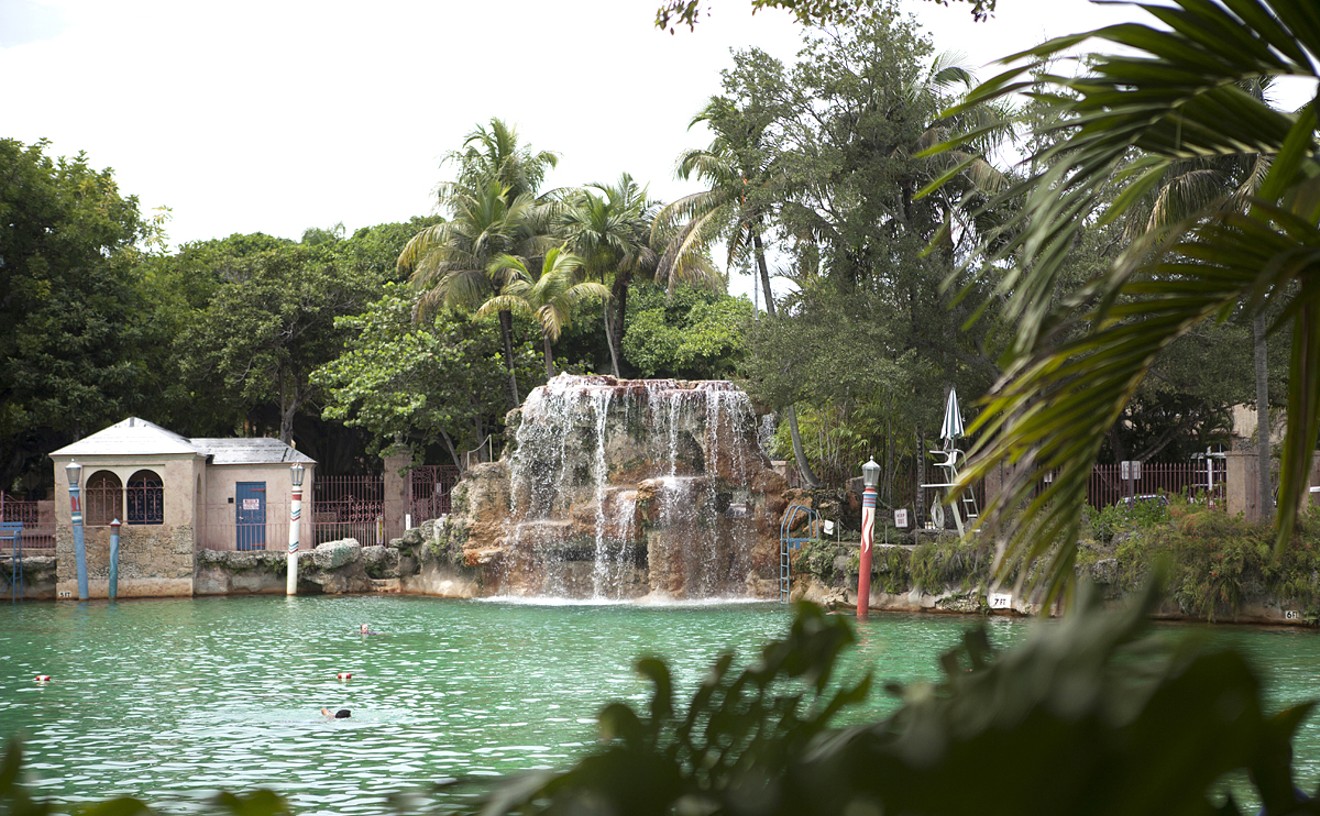 Photo courtesy of the GMCVB

When summer temps threaten to hit triple digits, there's one place in Miami that stays a consistent 76 to 78 degrees: the historic Venetian Pool in Coral Gables. Fed by a natural spring and drained nightly, the 820,000-gallon pool built in 1923 is ideal for a midday soak if your backyard is waterless or you find yourself terrorized by obnoxious drunks when you venture downstairs to your apartment's pool. This isn't just any neighborhood pool, either — with waterfalls, rock features, and faux Mediterranean ambiance, it's the only swimming hole in America on the National Register of Historic Places. For $13 for adults and $8 for kids (with extra discounts for Coral Gables residents), you'll get the most bang for your buck if you get there early and make a day of it. Bring your own snacks to avoid the lines at the concession stand, and put the money toward a chair rental so you'll have a place to sprawl out and stash your sunscreen. Take one last dip before the pool closes (around 4:30 to 6:30, depending upon the day and time of year) and ride home with the windows down so you can feel the hot wind against your wet hair. And if even that fails to shake your stubborn summertime blues, you have full permission to pull into the nearest parking lot and rock back and forth in the air conditioning.

Sure, you can take your non-Miami friends club-hopping in South Beach or exploring the artsy streets of Wynwood, but let's face it — that's so cliché. Though the 305 takes pride in its hard-core party rep and burgeoning arts scene, to really give out-of-towners a taste of the area, you have to show them the weird side. And Coral Castle Museum is the epitome of all things strange in these parts. Constructed by Edward Leedskalnin — a five-foot-tall, 100-pound Latvian man with a fourth-grade education — using nothing but his bare hands and simple tools, the coral-rock fortress is rumored to have been built as a tribute to Leedskalnin's love, Agnes Scuffs, whom he referred to as his "Sweet Sixteen" because she was 16 years old, a full decade younger than he was. Leedskalnin and Scuffs had planned to get married, but she called it off the eve of their wedding. With a broken heart and crushed spirit, Leedskalnin left Latvia. He lived in Canada, California, and Texas for some time but, after developing tuberculosis, ended up in Florida in 1918. He had begun construction of the castle in Florida City in 1923, a few miles south of its current location. But after hearing of a ten-acre site for sale, he moved to Homestead in 1936 and took the colossal stone pieces with him. It is said to have taken Leedskalnin three years to move the rocks. Construction at the current site began in 1936 and was completed in 1951, the year Leedskalnin died. However, no one really knows how he erected the castle. Some people say aliens helped, while others contend the whole backstory is a sham. He swore he "knew the laws of weight and leverage well," which is how he precariously balanced multi-ton rocks atop one another. Regardless of how Coral Castle was built, your out-of-town buddies will definitely have one hell of a story to tell back home.

There's a better way to see Miami than from a traffic jam on I-95 in your Ford Focus. A sunset helicopter tour will set you back about 200 bones per head, but it's the fastest and prettiest way to see Miami Beach and the surrounding area. TourHelicopter.com's choppers can fit up to six guests, but you need at least two to book a flight, so bring a favorite long-distance friend in town or that impossible-to-please love interest you have yet to wow. If you call ahead and time it right, you can catch the last bit of sunset and then transition into a nighttime tour of the city's lights as you head back on the half-hour excursion (which is also by far the dopest way to check out Christmas lights if you book around the holidays). If you're celebrating, and why wouldn't you be, it's A-OK to bring a bottle of champagne or your beverage of choice. But keep it classy — you're on a helicopter, not a frat party bus.

There's nothing better after you've smoked a tree than to be surrounded by them. West of Brickell, a soft mist lingers above the Roads. Just below sits one of Miami's best-kept secrets: Simpson Park Hammock. The Garden Center's coral-lined cottage entrance gives way to a true urban oasis, where a winding nature trail's seashell-lined path offers a blissful reprieve from the traffic roaring just a block away. There's silence — nothing but verdant humidity and rustling leaves. Miami's blue sky is engulfed by trees. In the distance, a family of raccoons rushes into red stopper bushes, shrouding the speeding Metrorail. Even sober, the place is magical. 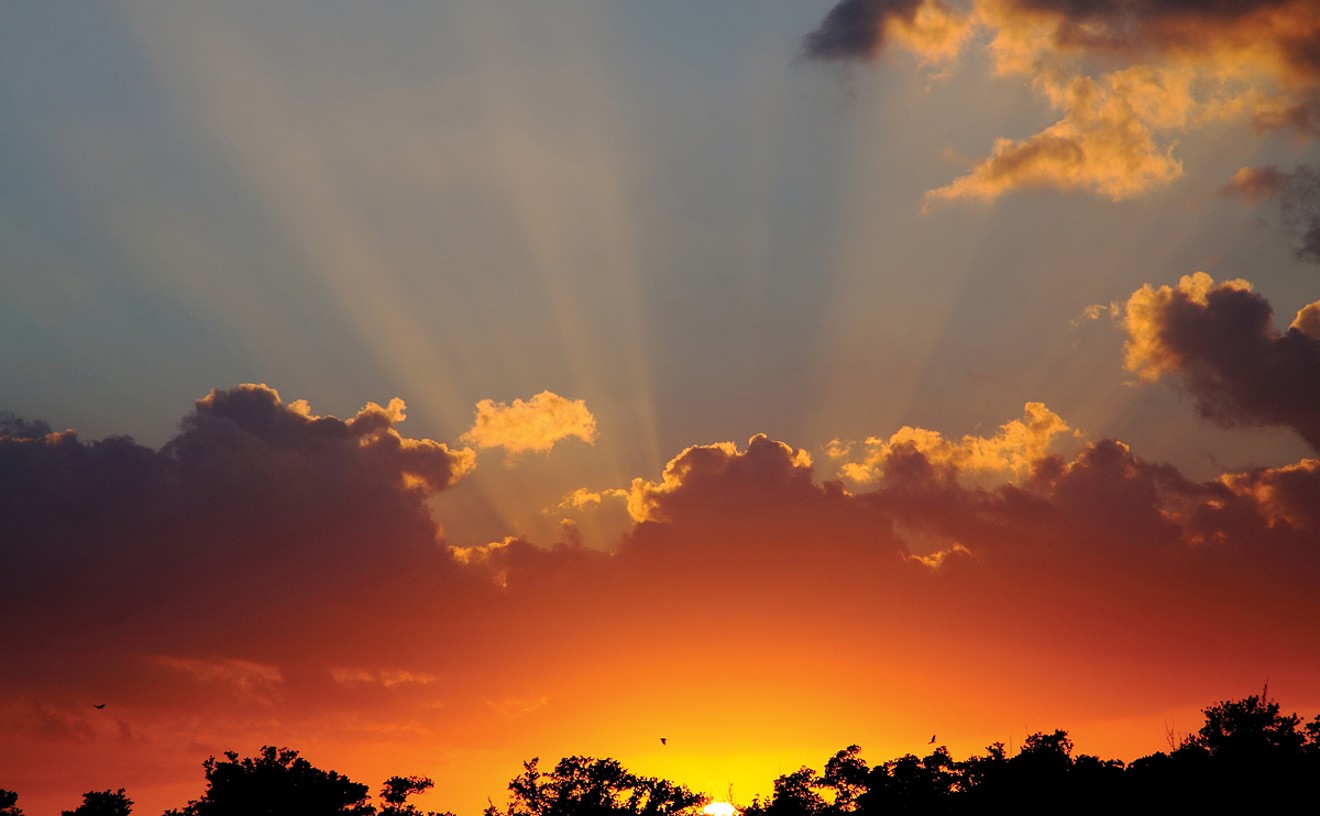 Sometimes all you need is a blanket, a leafy tree casting some delicious shade, and a few minutes to contemplate life's great mysteries while munching on a bologna-and-cheese sandwich. That may sound like a simple enough demand, but with all the sweating crowds, echoing traffic, and endless uhntz-uhntz madness that defines Miami, finding some peace and quiet in the Magic City can be a daunting task. But there's a lush green oasis right in the middle of it all. In fact, it's the first county park in the 305: Matheson Hammock. In 1930, industrialist William J. Matheson handed 85 acres of tropical hammock to the county and asked it to create a botanical garden. Four years later, the county bought a huge adjacent stretch of land to create more than 500 acres of oasis on the waterfront. Today you can find all of your picnic essentials, from massive banyan trees to pavilions and the occasional squirrel. There's even a manmade atoll pool that empties and fills with the tides. There's plenty of grass to pitch a picnic lunch, but there's also a sandy beach with views of the downtown Miami skyline.

Just south of the trendy Upper Eastside, where Russian billionaires are plotting the next wave of luxury condo towers, an older Miami holds out. Banyans line the streets of the historic Morningside neighborhood, where snow-white ibises roam freely, heading east toward the spot where Miami's best-rounded park hides nestled along the bayfront. This is not a cleverly designed concert venue or a hole-in-the-wall pop-up park. Morningside is a space conscious of its natural surroundings. On weekends, families barbecue near loved ones renting kayaks and paddleboards. Basketball courts and soccer fields brim with bustling, sweating players. But for those slow Thursday mornings, there's also a quiet bench and a sunrise waiting over Biscayne Bay.

Dog parks can be stressful for humans. You want to let your dog explore freely, meet new friends, and romp around. But how do you know if the other dogs there have been trained properly? What if they have fleas or aggression issues? These are the neuroses of a dog owner with severe attachment anxiety. But there's a place in Miami that can help — for a lot less money than the therapist's couch you probably need. Just over the Rickenbacker Causeway, next to the graffiti-covered Miami Marine Stadium, sits Hobie Island Beach. Cubans call it "Los Espinitos" because the beach is filled with mangroves popping up along the sand. It's not an ideal beach for people, but for dogs, it's a natural playground of adventure. Some dogs are afraid of water, flailing their paws as they try to walk across the swampy expanse. Others are natural-born swimmers. With the wind in their fur, dogs paddle across the shallow shoreline, discovering a new world — much to their relaxed owners' delight.

It's fair to enter most public restrooms, like all Keanu Reeves movies, with very low expectations. The vast majority are barely a notch above popping a squat on the roadside as honking motorists speed past and laugh. But if most public restrooms are the 47 Ronin-era Keanu bombs, the toilets at Village Green Park are Point Break. Perched in the emerald heart of the tony Village of Key Biscayne, this pit stop feels like an oasis you should pay for the privilege of visiting. Inside, the air conditioning cools, while soft lighting, floor to ceiling stall doors, and a fully stocked supply of toilet paper all whisper, "Serenity now." Walk in to this public restroom and you'll imagine Keanu himself saying it Matrix-style: "Whoa."

Underneath Metrorail From Coconut Grove Station to Brickell Station

The Underline is an ambitious plan to convert the path beneath the Metrorail into a ten-mile linear urban trail, designed by top architects and urban landscapers to be Miami's answer to New York's now-iconic High Line. But anyone who has run on the curvy trail today knows it's already great. The Metrorail's tall infrastructure casts a cooling shadow on the trail, and whizzing trains send a steady breeze down while your feet hit the pavement. Sea grape leaves and rock doves line the path beside you. And for now — before the starchitects and the glowing national media move in — it's a relatively seldom-used trail, making it perfect for a late-afternoon jog. Traffic rests at a stand-still along South Dixie Highway, but you're flying by. From Coconut Grove Station on SW 27th Avenue north to Brickell Station, it's a three-mile jog. And on your way back, you can treat yourself to a cafecito or craft beer from El Carajo — or simply take Metrorail back if it's that kind of day.

Legend has it that a pot of gold sits at the end of a rainbow, and fact has it that at the south end of the winding 25-mile Metrorail system, a commercial wonderland awaits. Riding Metrorail isn't something most Miamians do for fun, but that public transit commute can be a joyride if you stop at the Dadeland North station and run into the open arms of that colorful Britto character. The train deposits you at Dadeland Mall, home to 185 shops and restaurants, including the state's largest Macy's. The shopping is awesome, but driving to the mall is a headache, and trying to find parking (or your car afterward) is the reason Amazon is doing so well. Forgo everything that is crappy about the experience; let Metrorail do all the hard work, sit back, and take in the beautiful sights of suburban Miami along the way.