We had heard for months that the weekly drag cabaret show at Solare Coliseum is a must-see, but as single, working alt-weekly types trying to support two kids, we found it difficult to drive to Doral at 1 o'clock in the morning on a Monday. But being lovers of men in fishnets and wigs that reach higher than Marge Simpson's beehive, we phoned the baby-sitter, prepared to call in sick to work the next day, and made the trip. We were not disappointed. Sure, as gringos, we might have understood only half a dozen words all night, but head diva Marytrini and her crew put on a spectacle set to Latin pop songs and ballads whose lyrics we didn't have to understand to appreciate. There were matching costumes, choreography, back-up dancers (of the shirtless male variety, naturally), singing guest stars, and a cavalcade of some of the most polished queens in Miami. Never mind that this is a drag show; few weekly shows of any kind are quite as spectacular, and this one costs only $10 at the door. This is for sure: El Show de Marytrini is the only thing worth the trek to Doral after midnight on a Sunday.

In a city with few open mikes, and even fewer that are consistently good, Stone Groove is a breath of fresh bohemian air. Tuesdays at 10 p.m. at the Vagabond, some of Miami's finest poets read and recite their works while the weekly MC, Marcus Blake, keeps the artistry flowing across the stage in a steady but powerful stream. The Vagabond puts first-timers and veterans alike in the same spotlight at a venue that's ideally suited for intimate but impactful performances — dark, moody lighting and enough space to seat scores of audience members who tend to be very supportive of those on the mike. Voices of rebellion, of discontent, of sublime exaltation become enriched and emblazoned by the Stone Groove's weekly band, which keeps the funk churning and fills the atmosphere with keen sounds to match the mood of each respective poet. The vibe is low-key yet vibrant, and the ambiance, composed of potent words and smoky air glowing in soft red light, immerses listeners in the moving performances that flow from the microphone. Sure, it breaks the mold of Miami open-mike nights. Maybe that's exactly why it's become so popular.

Certain nanny states (such as California) have decided that ladies' nights are unlawful because they're a form of "discrimination based on sex." In Florida, though, even the dudes say, "Screw that crap!" There is absolutely nothing wrong with weekly promos offering fun-loving females deep discounts on cover charges, alcoholic beverages, and/or other services. Especially when Casey Zap is planning the party, Chalk is choosing the tunes, and Ms. Veronica Gessa is serving the free slices of pizza. And indeed, for the past year, Mr. Zap's Ladies' Night has proven to be a straight-up party paradise for all of South Florida's fun-loving femmes and the dudes who wholeheartedly support them. Originally, this Tuesday-evening, estrogen-friendly hang-around hosted its "arm-wrestling tourneys," "worst-dressed contests," and "Mayan virgin sacrifices" at Midtown's Ricochet Bar & Lounge. Sadly, though, Zap's beloved "Camp Ricochet" abruptly closed down in April. Yet ladies' night lives on — now at Brickell's Blackbird Ordinary and still deeply dedicated to "campfire songs, making out in the woods, spin the bottle, Twister, dodgeball, ghost stories, and a bunch of adults acting like children and staying out late on a weeknight to drink like school's out for summer, forever." 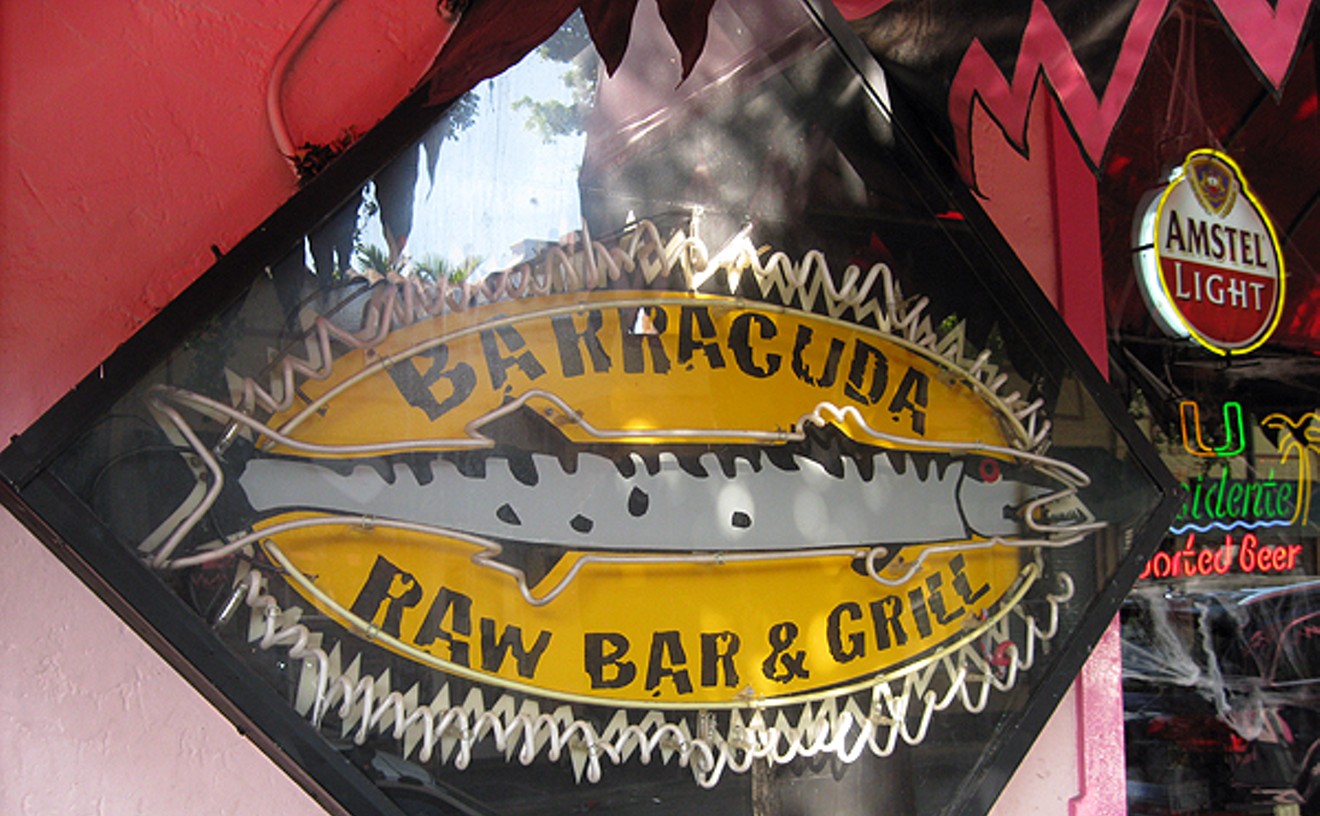 When it comes to keeping it classic, Barracuda Bar & Grill in Coconut Grove does it right in every sense of the word. Instead of succumbing to the futuristic, flat-screen jukebox mounted on a wall, Barracuda owner Lee Kessler opted for a more nostalgic, bulky box with a dash of technology. It's equipped with a touch screen offering thousands of songs. If the track you want isn't on the playlist, the jukebox goes online to find your tune. "I think this bar lends itself more to a traditional-style jukebox," the 38-year-old Grove native says. "It's worth the four square feet of space it takes up." Kessler purchased the bar more than a year ago to ensure that Barracuda remains an institution in the neighborhood in which he grew up. Popular with the college crowd, this watering hole has been serving suds and greasy bar food since 1995. Since then, the tavern — decorated with wood salvaged from an old Florida shrimp boat — has been a staple for locals and tourists to eat, drink, and play. The food menu features Barracuda's famous sandwich of fresh snapper or mahi-mahi on crisp garlic bread, along with a large selection of bar favorites. Grovites can attest to the friendly staff, local history, and attractive happy-hour specials. It's an ideal spot to play beer pong and billiards while crooning to the sweet '80s glam-rock sounds of Whitesnake or dropping verses from '90s gangster rap like Dr. Dre's The Chronic. "During the day, people play more classic rock," Kessler says. "At night, when we get a younger college crowd, the selection is more bass and hip-hop music. It definitely varies." 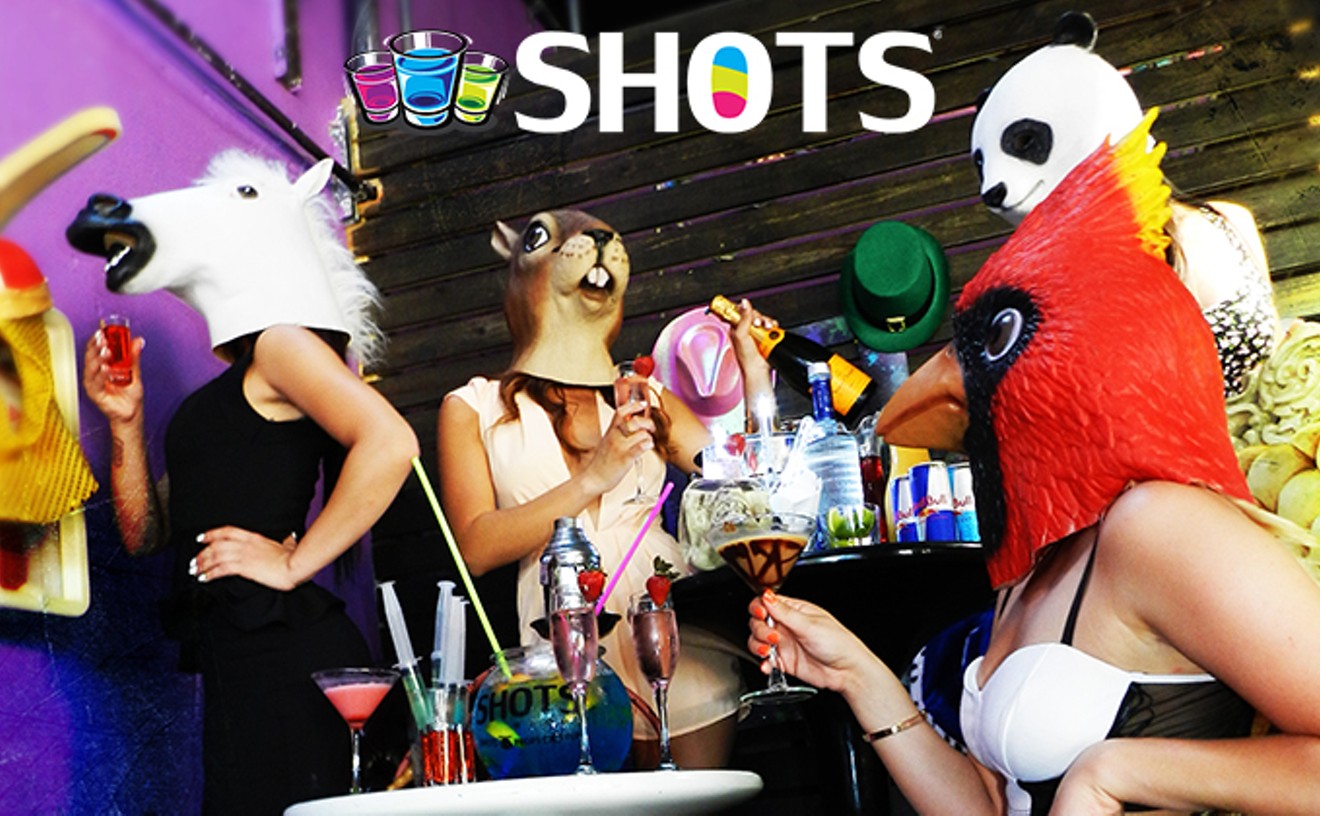 Shots Miami might be best known as the spot where you have to wear a sombrero, sing a song, or otherwise embarrass yourself in front of your friends before pounding some liquor. But there's another reason you should know this Wynwood joint: Thirsty Thursdays, when $3 and $4 shots can be had all night long. In a city where the average price of a shot is $10, the $3 to $4 price (plus $1 tip — always tip your bartender) can't be beat. Soon after downing three or four of these appropriately priced drinks, you'll forget where you put your dignity, strap on an inflatable prop, and dance around the table. As the master poets of LMFAO once said: "Shots! Shots! Shots! Shots! Shots! Everybody!"

The Voice continues to grow louder. What began as a pirate radio station in 1967 has become one of the most powerful college radio stations in the nation. And we mean "powerful" quite literally. Last fall, WVUM, the University of Miami's student-run station, underwent a massive signal boost, which means listeners can tune in from up to 30 miles away from the Coral Gables transmitter. That upgrade doubled the station's reach, and it can now be heard as far north as Fort Lauderdale. Watt quantity is nothing without quality, though, and WVUM remains on the cutting edge. Sure, new students filter through every year, putting their own unique stamp on the station, but for more than a decade the Voice has favored an eclectic playlist that embraces everything from folk to electronic to world. It's a station that kicked the stereotype that college radio plays only forlorn indie rock. The staff's eclectic music taste fittingly remains as diverse as the community it serves.

The walls at Audio Vision Studios are pure gold and platinum. Owned and operated by brothers Ron and Howard Albert, along with TK Records alum Steve Alaimo, this North Miami operation and the dozens of hit records, framed and hanging in the lobby, are monuments to Miami music history. Throughout the '60s and '70s, Ron and Howard, longtime local studio pros who were recently inducted into the Florida Music Hall of Fame, were chief engineers at Mack Emerman's legendary Criteria Recording Studios, shaping songs and albums by the Rolling Stones, the Allman Brothers Band, Eric Clapton, the Bee Gees, Barbra Streisand, Kenny Rogers, Dionne Warwick, Dolly Parton, and Crosby, Stills & Nash. Meanwhile, Alaimo was holed up at TK's Hialeah shop, producing and polishing the funky disco and smooth soul sounds of KC & the Sunshine Band, Betty Wright, George McCrae, and Bobby Caldwell. And now, 40 years later, Ron, Howard, and Steve share Audio Vision, where superstar clients such as Lil Wayne and other local hip-hop heavies cut Top 40 rap tracks. "I think we have 40 gold records to our name," Howard once told New Times, "and about 30 or so platinum." Of course, there's always room for another dozen.

With an ever-thickening catalogue of raw offerings from Leroy "Big L" Brown, Sex Sells, S.K.A.M., Sishi Rösch, and a bunch of other hard-core party boys, this 305 label is all about that deep and dirty booty-tronic sound. Run by filthy EDM genius Jesse Perez (AKA the musical mind behind "Dejen de Comer Tanta Pinga," "We Get Fucked Up," and "Interracial Booty Calls"), Mr. Nice Guy Records has a simple priority: ass-clapping! "Been grinding on all types of females since I was 5," Jesse once told New Times. "I used to get thrown out of United Way school dances for dry humping." But even if the track titles and related come-ons are raunchy as hell, Perez and his crew's stroke is smooth and sophisticated. "I just look for real talent, no phonies," Jesse says. "We push a very distinct sound from what everyone else is doing. Some call it hood house or gangsta house. I refer to it as ass-clapping music or bump 'n' grind." It's sticky. It's stanky. It's real. Or in the words of the boss: "No hype, no all-American smiles. Just talent and dick length."

Traditional radio is boring and predictable. Your music-discovery engine needs a swift kick in the ass — a jolt even. Just turn off that old FM receiver and plug into the constant stream of melody on JoltRadio.org. Playing the best in local, national, and international jams, this is homegrown internet radio you can enjoy all over the world. It drops indie, dance, classics, hits, and anything with a progressive sound. Tune in and you'll catch anything from !!! to the Shins, Grimes to the Magnetic Fields. Even though an internet base makes Jolt global, it represents the 305 in everything it does. Its website offers an in-depth look at all of Miami's happening bands, producers, and musicians, plus a calendar of events cataloguing the best live music in town. You can even stay up to date with artist-of-the-month spotlights. Give Clear Channel a rest; it's making plenty of cash without your car radio. Get involved with your city and your community instead — all by listening to some great tunes. 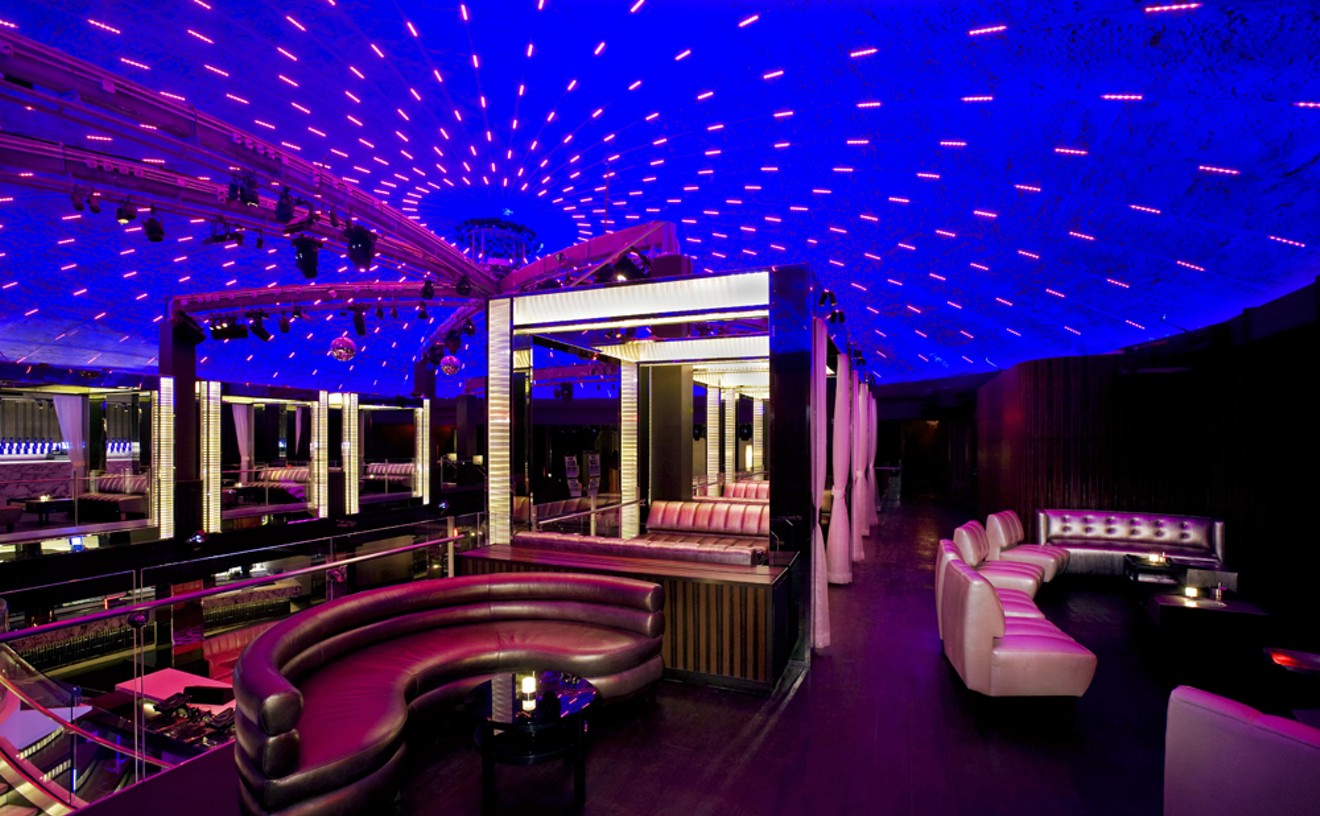