José Luis Burgos is a barber at the Razor’s Edge in Miami Shores, where he has worked for eight years.

1993 I left Cuba in a small boat, but soon the motor quit. So I started rowing. I rowed for hours -- through the night. I lost all my food and didn't have much water at all, but I kept rowing. Finally, after seven days, when my water was just about gone, I spotted a small island in the Bahamas. Soon I was spotted by an airplane, then picked up by the Coast Guard. That was the most dramatic thing ever to happen in my life 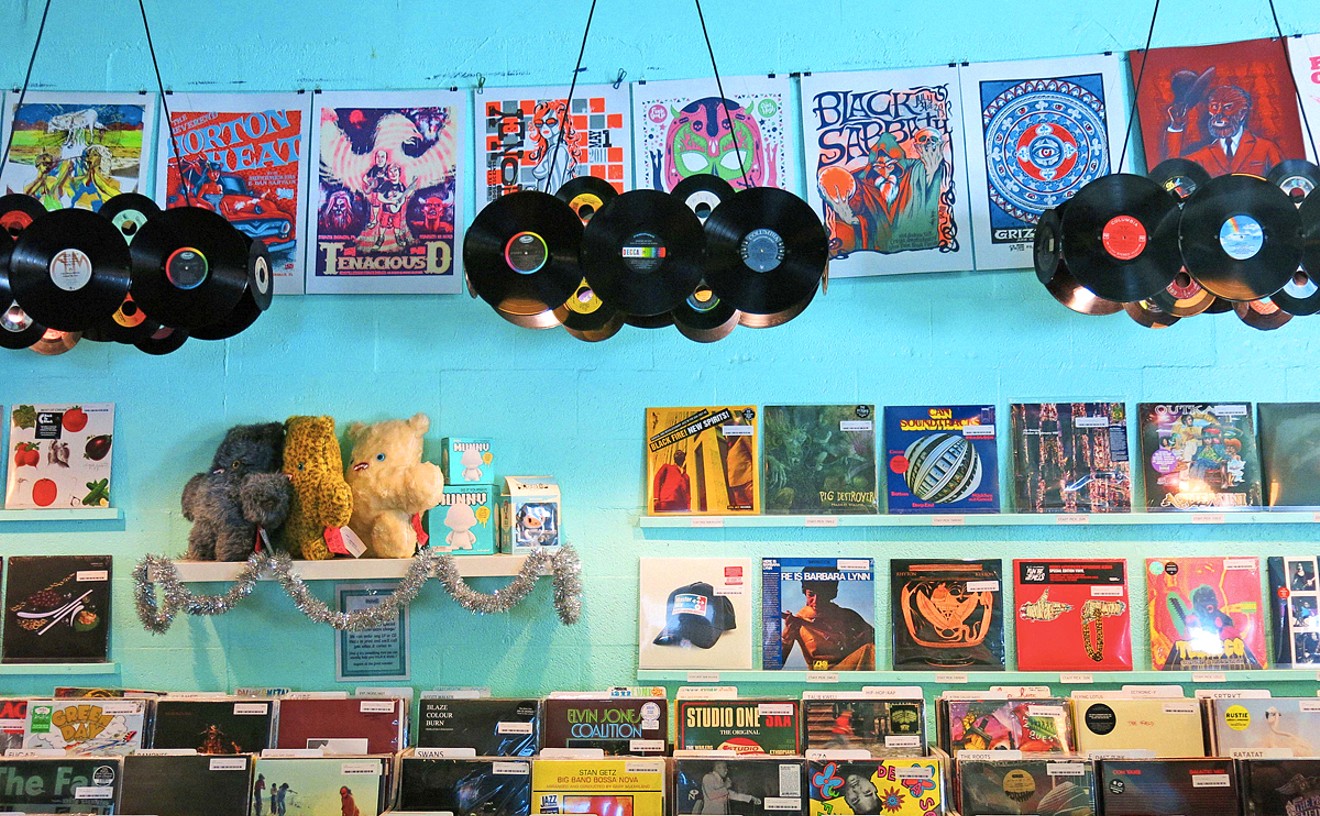 Paolo Santosuosso
Last year we gave this little-indie-store-that-could the title of Best New Record Store. A year later, Sweat has won the hearts of all who deem themselves hip in Miami and has undergone some serious growing pains. The original location took a major beating from Hurricane Wilma, and the store was eventually relocated to a small warehouse at the back of English bar/longstanding live rock and roll venue, Churchill's. Could there be a better place for a record store? We don't think so. Fans can feast on Churchill's delectable pub-style grub and then wander into the tranquil aqua atmosphere of Sweat to rummage through racks of vinyl, CDs, and DVDs, as well as quirky toys, magazines, and locally made jewelry. Preloved records go for anything from one to five bucks, and for many of the new CDs, all you'll need is a Hamilton. Sweat opens late -- usually around 2:00 p.m. Monday to Saturday, but it closes at midnight. So after that killer local band plays its set on Churchill's stage, fans can creep back to the store to cop an EP. The store has its own book club that meets regularly to discuss edgy, well-written literary works. Plans to start craft and movie nights are in the works. A laid-back afternoon at the independent bastion finds a hipster clad in black, picking up albums by the likes of the Beta Band, Joy Division, Outkast, and Le Tigre. Lauren Reskin (nickname Lolo), the orange-haired, label-owning DJ/record store co-owner, is busy behind the counter, putting the finishing touches on the latest issue of the store's newest project, a funky, free zine named The Sweater. Late-period disco videos by Serge Gainsbourg burble in the background, screened on a gigantic TV set that dominates the small space. A hippie chick clad in paisley stumbles in, carrying an armload of old records. "Look at these! I found them in the dumpster," she exclaims, as Lolo leaves her post to shuffle through the pile. "Who would throw away records, man?" the hippie girl wonders. Old vinyl and young music lovers have found a good home.

The kind of store you find on every block in parts of Manhattan, Blue Note has dusty bins that are potential treasure troves. There's always some schmuck who bought the new Ghostface expecting hip-pop, or the Minor Threat discography because the guys from Good Charlotte mentioned them in an interview. These people can't handle musical truth, and because they have rushed to Blue Note and unloaded their barely used goods, you can capitalize on their bad taste. The only thing wrong with Blue Note is that visiting the store is a reminder that Miami lacks more like it.

There is no doubt that Museo del Disco has an enormous catalogue of Latin music on hand. What's not in stock is easily ordered -- which is typical these days. However, Museo del Disco offers a singular thing of value, one that is impossible to obtain from any Website: its owner, the exceedingly colorful and entertaining Hinsul Lazo. The fortysomething native of Pinar del Rîo, Cuba, is happy to talk about music -- or anything -- in prose purple enough to make a Rosetti blush. Here in his words is a description of the fantasticality of Museo del Disco: "It's in a warehouse district, and it's a gorgeous store. No, it's a beautiful store. It's like no other store in this city. Not because it's mine. That's the word from all the customers. They walk in and they're amazed it's so neat and organized. It's a warehouse but it's decorated like a dollhouse. The furniture's red, the walls are white. The light boxes around the entire store are red. It has pictures of all the old records, the Beatles' Sgt. Pepper's Lonely Hearts Club Band. What if you were looking for a Miles Davis CD or a John Coltrane or a Billie Holiday, some great CD? There are only two ways to find them. Either online, because that's where people go because they don't think any store's going to have them. Or you can go to my store. And you'll find it in my store. Because that's what it's about. My store's a music store. We special-order things for people. It's the old style. And by the way, nothing in my store is bootlegged or burned or counterfeit. It's all original product. From everywhere: Cuban, Colombian, Argentinean, Brazilian, Venezuelan, Mexican product. Buddy, everything. I bring in from Puerto Rico. I import directly from Cuba." So there you have it.

While serious vinyl fetishists might consider their post office box the hippest place on Earth, less-accessorized turntablists should mosey down to Grooveman Music to completely outfit themselves with all the necessary accouterments. You can literally walk in and purchase everything you need -- consoles, music, bags, clothing, and even sunglasses -- to play DJ in front of the mirror at home. Although this place might not have the stacks of old vinyl that DJs crave, it does have a good selection of current dance tracks both on vinyl and CD. And there are scads of listening stations. The music section is heavy with house, trance, electro, dance, and drum 'n' bass, but one is still permitted to indulge in the occasional guilty pleasure like Madonna or Depeche Mode.

Up Yours Luv Records

You might not notice Freddy the Bastard's little corner of the universe while you're drunkenly moshing at a club, and even if you did, it would be easy to dismiss his wares as the DJ's play pile or the band's merch table. But if you choose to closely inspect Fred's wares, you'll find a cache of rare LPs, CDs, and books that's breathtaking and for sale! Then, when you actually talk to the proprietor about music or some similar bullshit, his high-octane enthusiasm will intoxicate you into buying records you didn't know existed. A recent émigré from Gainesville, Freddy has been dealing internationally for more than twenty years. Many record collectors know his mug because they have purchased rarities or new releases from him at concerts. The nice bastard (we know this is an oxymoron, but that's who he is) knows his stuff as well as anyone in town, but he hauls the product to wherever customers gather. Call or e-mail Freddy ([email protected]) so you know what nightclub he’s hitting next or to see if he has something you’re looking for. Give him your wish lists! He specializes in punk and hardcore but also serves the needs of goth, industrial, indie, garage, and grindcore kids.

Best Place to Screw in a Light Bulb

Everyone knows the old joke. How many (fill in the blank) does it take to screw in a light bulb? Here's a new answer for you: None, if you take your lamp to Light Bulbs Unlimited. Just ask the helpful employee behind the counter, and he or she will tell you exactly what it will take to lighten up your world. Regular bulbs start as cheap as 34 cents; those craving a spotlight can purchase one for $6; and hydro heads can purchase grow lights for $6.75. It's easy to be dazzled by the array of cool hanging fixtures and lamps. A standing lamp with a row of round blue fixtures like six fish eyes will set you back $1995. A whimsical fixture with a silver parachuting man affixed to a silver minispotlight costs $240. A beautiful modern chandelier that resembles a shining spider web costs only $847.50. Fluorescents and miniatures, fixtures and novelty lights, colored bulbs and neons -- this place is positively glowing. Stopping by is a bright idea. You'll leave feeling positively illuminated. Ba-da-bum.

The coolest-looking Publix is probably the one on West Avenue in South Beach. It's designed by architect Carlos Zapata and is a gleaming glass testimony to SoBe chic. The Publix in the Plaza del Paraiso strip mall is on the opposite end of the city, and makes a statement about Kendall. It's a generic, sprawling branch that might not look cool, but you can get anything you need here. And do we mean anything. This Publix combines features from some of the supermarket chain's rivals. The plant and flower section is extensive and also offers clay chimeras, ceramic pots, and decorative garden accessories. The bakery is stocked with a dazzling array of breads, pies, pastries, cakes, and frozen desserts. The wine department curves inside itself like a maze in a lush's dream, with departments organized by country of origin. Hard-to-find bottles can be had here, like Fetzer Gewurztraminer, which costs $14. This branch of Publix is beginning to venture into Wild Oats territory by offering a slowly expanding section of natural and organic meats, including pork, steak, chicken, and buffalo. It also boasts the largest Greenwise section of any Publix in the area -- fully stocked with vegetarian frozen foods, specialty pastas, and rice infused with flaxseed oil. The very same R.W. Knudsen and Lakewood organic juices that go for a pretty penny at Whole Foods sell for $3.75 here. The beer department is a must-visit. The selection rivals that of many liquor stores and offers a stunning variety of local and imported beers, ciders, and colorful girlie drinks.

Every single thing in this place is organic. Much of it is local, and all of it is available for delivery. Delicious Organics is a three-year-old company owned by a young, beautiful, community-minded couple -- Jack and Annie Malka -- who believe in creating a market for all things environmentally friendly. (Seriously. They even sell recycled aluminum foil.) Creating that market means catering to convenience, so they offer online shopping and a weekly delivery service. They cull the best local, regional, and national produce and products; print your order; pack it for you; and deliver it in a cooler for a flat $9.95 fee -- whether you live in Boca Raton or Marathon Key. But if you want to pick up your own grass-fed brisket ($6.99 per pound), kosher cow's milk feta ($3.49 for eight ounces), or radishlike green kohlrabi ($2.39 for two), stop in Mondays or Fridays from 2:00 p.m. to 6:00 p.m. If you don't have time to choose your produce online, or if you simply want to save money, try the weekly co-op boxes: Forty bucks gets you one filled with four to ten different fruits and seven to fifteen different vegetables to meet your budgetary and nutritional needs. Nutrition and convenience? Bring on that raw, grass-fed, Amish farm milk.