If right wing Pavel Bure remains the Panthers' superstar, a goal addict forever in search of his next fix, then center Viktor Kozlov serves as his pusher. Kozlov, who skates with Bure on the team's number one line, feeds a steady supply of dazzling passes toward his Russian countryman. Kozlov is the best stick handler in the league. The attention defenders must give to his powerful wrist shot creates opportunities Bure is skilled at exploiting. Not that Kozlov can't score on his own; during the 1999-2000 season, he set personal bests in goals, assists, and points. A nagging shoulder injury kept his numbers down this season, but when he's healthy and in the lineup, he, Bure, and the rest of the team all play at their best.

The past year has provided uplifting proof that there is no shortage of locals willing to risk their lives to help others in a uniquely South Florida jam: rescuing people who have driven off the road into a canal. Remember these heroes next time you hear someone badmouthing Miami and its rude citizens.

•November 4, 2000: Four Miami-Dade police officers -- Eduardo Garcia, Will Sanchez, Pedro Polo, and James McDonnell -- dived into a canal at SW Seventh Street and 122nd Avenue to rescue a nineteen-year-old woman trapped in her sinking Nissan. The car was submerged when the officers reached it. "She had been holding her breath, and by the time we'd gotten there she was on her last breath," Garcia told the Miami Herald.

•December 7, 2000: Off-duty Hialeah police Lt. Joe DeJesus jumped into a canal on Griffin Road in Broward at 11:00 p.m. to rescue a woman whose van had veered off the road. She was unhurt.

•January 12, 2001: Hialeah residents Jim Gentilesco, Jr., and Rene Abreu jumped into a canal at West 44th Place and Fourth Avenue when they saw a 40-year-old woman's car slip into the water.

Miami's Spanish-language talk radio all too often suffers from a conformity that ill serves listeners, and from analysis that could more accurately be described as propaganda. For these reasons Col. Matias Farias's shows on weekday mornings and Thursday evenings are so refreshing. Where else on Spanish-language radio could one hear Commissioner Jimmy Morales dissect the Marlins stadium deal or listen in to frank talk about who will really benefit from the Latin Grammys coming to Miami? Farias's life is the stuff of novels. He escaped Cuba in a stolen crop-duster. After the failure of the Bay of Pigs, he joined the U.S. Air Force. He served in Vietnam and Laos, teaching military intelligence. While with the Southern Command in Panama he struck up a friendship with Gen. Manuel Noriega. Farias retired from the air force a full colonel in 1990. In addition to his radio duties, he consults on political campaigns both here and abroad. When this background comes to bear on political events in Miami, the result is an insight on which listeners have to come to rely. 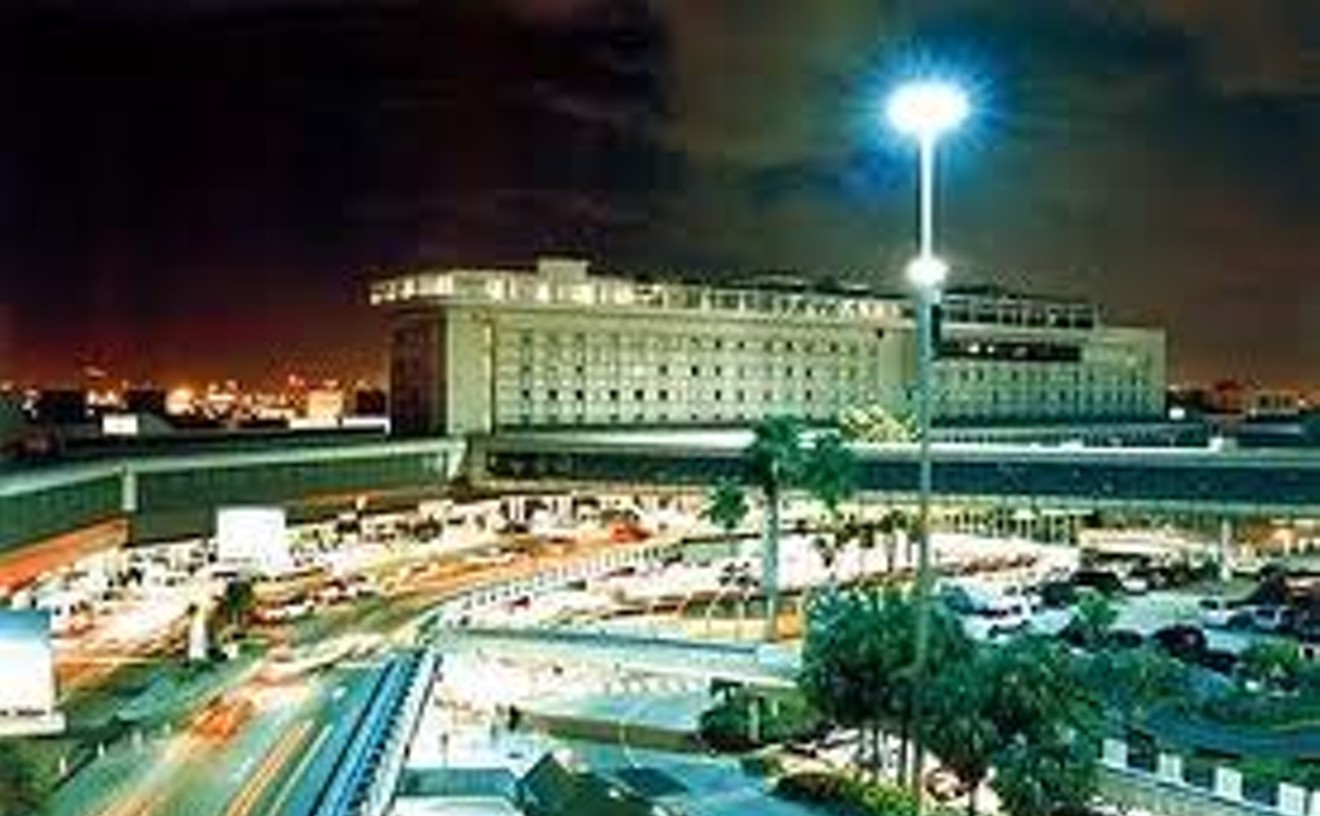 He has a World Series ring -- a ring he won with the Marlins. He has four consecutive gold gloves. More than anyone else he will be responsible for harnessing the exciting young pitching talent the team has stockpiled. He's improving as a batsman. He's a Marlin by choice, signing a free-agent contract with Florida at well below his market value. He was the first draft pick in team history. His return is a very real reminder that the Marlins are on the right track -- if not yet worthy of the World Series, then at least headed the right way.

Almost 80 years after John and Zada Schleucher founded a program to help Miami's poor, the Miami Rescue Mission is still serving "soup, soap, and salvation" to the city's lost souls. The mission has grown into a multifaceted facility featuring residential programs for men and women, a thrift store, an education center, and a companion operation in Broward County. Every day the mission's Men's Center on NW First Avenue serves a hot meal at both lunch and dinner to about 200 men, women, and children. The lunch, however, isn't free. Those who wish to eat must first attend a religious service in the mission's chapel. Although that may turn off some people, it makes others feel as though someone has helped the whole man rather than just filled his stomach. At least that's what Horace says as he eats a lunch of beans and rice, salad, cabbage, cookies, and chocolate milk. An ex-addict who has been in the Rescue Mission's residential program for a year, Horace adds optimistically that in three more months he'll be back on his feet, working as a long-distance truck driver. The Miami Rescue Mission helped make that possible when he had nowhere else to turn.

Southwest Miami High School's boys basketball team, led by five-foot eight-inch point guard A.J. Castro, gave its win-starved fans much to cheer about this year. After decades of lackluster seasons, the Eagles squad tallied a 22-7 record, upsetting perennial powerhouses and reaching the county finals for Class 6A play. At one point the gutsy Cinderella team was ranked second in the state. At the heart of the dream season was the team's fast and slippery playmaker Castro, who frustrated many a taller opponent. On the court he is fearless, taking control with lightning-quick passes, nervy rebounds, and wicked three-point shots. And he has a knack for scoring when the team needs it most. During the Eagles' final regular-season game against their district rivals, the South Miami Cobras, Castro whooshed an arching three-pointer that won it for the Eagles as the clock ticked off its final second. The short guy was named to the first-string all-state team by the Florida Sportswriters Association, the McDonald's All-American Team, and the county all-star roster. Not bad for a scrappy Cuban kid from the burbs. He's a senior now, and when he accepts that scholarship to Cornell, as expected, the hoops around Westchester will never be the same.

Drag queens are like birthday cakes: layered and coated with thick frosting painstakingly applied to evoke strong reactions. The cake most full of surprises in this town full of queens is Ivana, the shiny-lipped, bawdy broad from Buenos Aires. When she struts atop the bar at Cactus in white hot pants and go-go boots, be prepared for an onslaught of camel-toe jokes from a girl who is just about ready to bust out of her own outfit. Try as she might to be classy, whiskey-voiced Ivana can't help it. If her lip-synching to saccharine pop is a little off, her sense of timing when she emcees her shows in Spanish is fierce. Watch her sparks fly Friday nights at Ozone and Saturday nights with Adora at Cactus.

Best Sanctuary From The Fast Track

There is something pleasantly dreamlike and unreal about Black Point Marina. It's an improbable mix of natural and human construction. On some sea charts the area is known as "the featherbeds." Dog walkers have been known to meet crocodiles on Black Point's walkways. To the south looms the region's only peak, Mount Trashmore. At the marina's dockside restaurant and bar, the Pirate's Den, the beer runs cold, the food is passable, and customers can down pitchers while watching herons fish. A 1.5-mile jetty path that juts into the bay is the perfect place for a stroll afterward. Couples spread blankets on the grass. Families picnic and fish. Manmade Miami is rarely this peaceful.

Since 1965 Red Berry has been teaching youngsters to pitch, catch, bat, and spit like a major leaguer. At various times he also has served as a coach for the University of Miami Hurricanes and a professional baseball scout. He likes to claim at least some of the credit for the careers of players who went on to play for teams such as the Philadelphia Phillies, Cincinnati Reds, Montreal Expos, Chicago White Sox, Detroit Tigers, Minnesota Twins, and Toronto Blue Jays. The secret to the decades-old formula? Teaching the kids proper player development, to be part of a team, and to have a good time. Summer camp begins in June. Sounds like fun, and if there's any truth to the Baseball World slogan, it is just that: "Home to America's happiest ballplayers."