The lady has cojones, which is more than we can say for the rest of the editorial page. Krog spends most of her time writing unsigned editorials, typically on the subject of county government. But she also pens signed opinion columns, which are sassier. For instance in a recent column she blasted Miami-Dade County Mayor Alex Penelas for opposing the hiring of Angela Gittens as the county's new aviation director. "For his political gain, Penelas is making it nearly impossible for MIA -- and therefore the public he purports to serve -- to get the strong, experienced management it needs," Krog wrote. "You have to wonder from whom Penelas is taking advice and counsel these days. I'd suggest he fire their butts."

On another occasion Krog was equally blunt toward the newest member of the school board. "It wasn't that I expected new Miami-Dade School Board member Jacqueline Pepper to start her public life with a quick display of leadership or anything," Krog allowed. "She's a political newcomer, after all, and has a lot to learn on the job. But I sure thought that for starters she'd do something smarter than hire her husband as a staff aide. It's legal, says Pepper. Sure, but it's not right."

And on the nomination by President George W. Bush of Linda Chavez as secretary of labor, Krog had this to say: "If Chavez is a victim of anything beyond her own bad judgment calls, it isn't the Beltway's witch-hunt atmosphere as she claims, but Bush's unwise selection of her in the first place."

Krog's strongest column of the past year, however, was far more personal. She wrote about the death of her father: "A few words about this man: He called dry cereal “pop-nuts-scrummies.' He took in strays -- both the two-legged and four-legged varieties. He baptized a basset hound that wandered onto the place and became his adoring shadow “Soupbone' for its sorry shape. He had only one usable arm after polio but played basketball, touch football, and softball with his kids on summer evenings after a long, hard day of farm work. He never whined, never complained, never looked back with regret, always leaning slightly forward into life, which he embraced and accepted for what it was -- and for what it could be."

What a difference a year makes. Back then Miami-Dade County was snubbing the Latin Grammys. Now Mayor Alex Penelas and Cuban American National Foundation chairman Jorge Mas Santos are rolling out the red carpet for the awards show. Why? Technically it's because a U.S. Supreme Court decision effectively nullified the county ordinance that barred groups that do business with Cuba from using county-owned facilities. But the real reason is simpler: Penelas, Mas Santos, and others in the Cuban-American community finally awakened to the fact that they were losing the public-relations battle for the hearts and minds of the American people. Rather than seeming sympathetic, Cuban Americans were viewed as intolerant, especially following the Elian Gonzalez affair. And Miami, rather than being the vaunted Capital of the Americas, was becoming increasingly isolated. Opening the doors to the Latin Grammys is the first step in a long-overdue effort to reverse that trend.

When asked about his New Urbanism-inspired development now under construction on Allison Island in Miami Beach -- a pedestrian-friendly neighborhood of moderate-height homes and townhouses -- Robins said what anyone offended by the condo canyon rising around South Beach longs to hear. "Everybody," he told the New York Times, "wants to build a 40-story building and sell you your shoebox in the sky without taking any responsibility for what effect a high-rise has on its surroundings."

When asked about his New Urbanism-inspired development now under construction on Allison Island in Miami Beach -- a pedestrian-friendly neighborhood of moderate-height homes and townhouses -- Robins said what anyone offended by the condo canyon rising around South Beach longs to hear. "Everybody," he told the New York Times, "wants to build a 40-story building and sell you your shoebox in the sky without taking any responsibility for what effect a high-rise has on its surroundings." 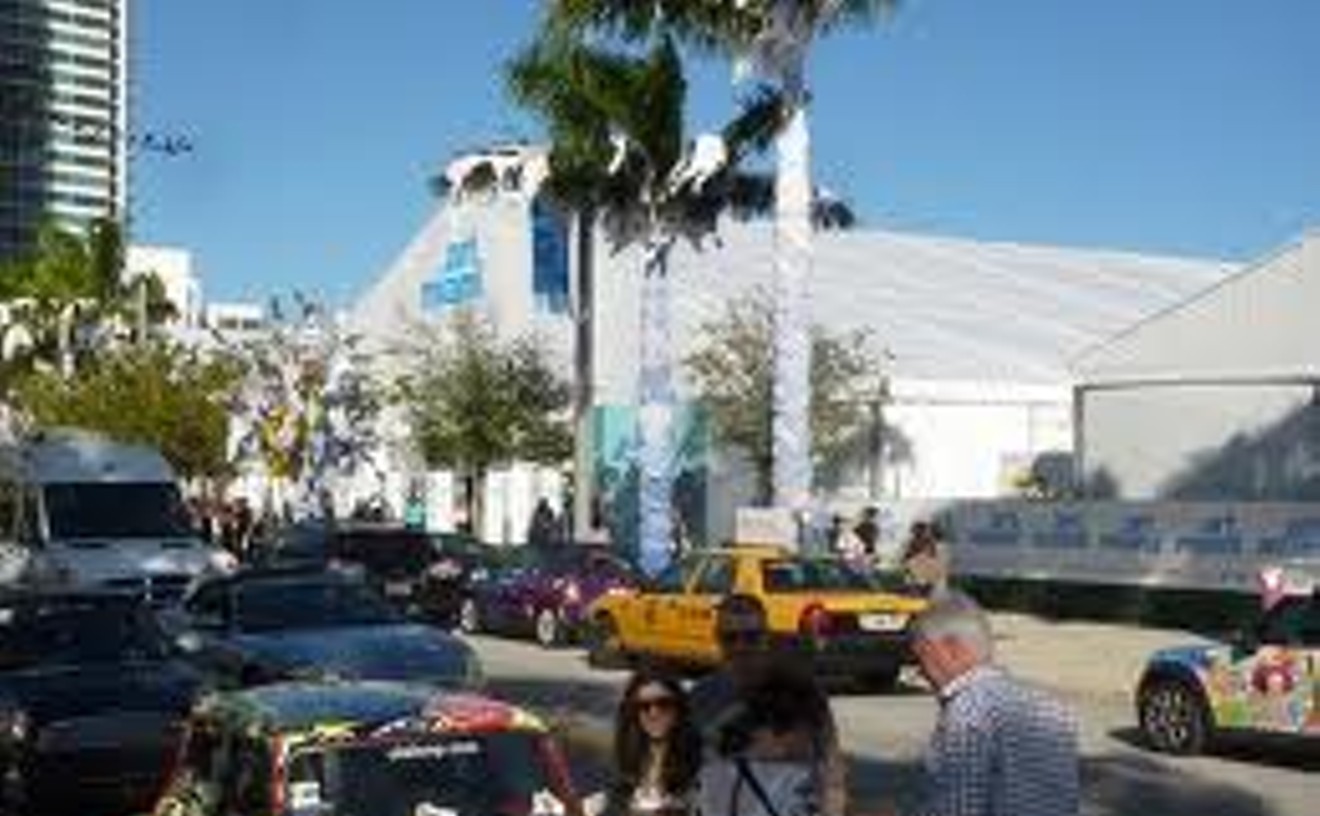 In 1988 Ramon Cernuda presided over an auction of paintings held at the Cuban Museum of Art and Culture. The works were created by Cuban artists who had not broken with the Castro regime. The new owner of Manuel Mendive's Pavo Real promptly stepped outside and set it ablaze in the presence of cheering protesters. (Twice the museum was severely damaged by bombs.) A year later the feds accused Cernuda of purchasing Cuban art in violation of the embargo; they raided his Brickell Avenue condo and confiscated 240 paintings. A federal judge angrily denounced the seizure and ordered the works returned. Today the backsides of those paintings display U.S. Treasury/Customs Service seals, the same ones used to label intercepted drugs. Who would have thought that eleven years later, Cernuda would be opening an art gallery specializing in Cuban art from the island, smack in the middle of Coral Gables. This past fall Cernuda Arte made its debut with an exhibition of Cuban originals by masters such as Amelia Pelaez, Wifredo Lam, and Carlos Enriquez. Currently the gallery represents six working artists. Two of them, Demi and Sinuhé Vega, are based in Miami. The others create in Cuba. They are Flora Fong, Juan Roberto Diago, Alfredo Sosabravo, and Rigoberto Pelaez. "We are very open about what we do," Cernuda says. Boy, have times changed.

Not only did our friends at WTVJ-TV (Channel 6) abandon South Florida's first television studio -- conveniently located across from the federal courthouse in downtown Miami -- to better bring us gripping developments from Plantation City Hall, and not only did they leave a physical and metaphorical black hole downtown, they also desecrated the structural shell they left behind. On their last day in Miami, staffers pulled out markers and paint and graffittied their historic studio's walls. There's symbolism here, none of it particularly appreciated.

"Oooh!" our car squealed as a young Cuban fellow yanked open her doors and began vacuuming nooks and crannies she didn't even remember having. They'd been crudded up that long. Somehow he's able to distinguish and therefore not throw away the valuables lost in a thick layer of gym clothes, fast-food bags, spilled laundry detergent, and work papers we meant to take home but have actually been ferrying around town for weeks. Car-wash packages range from $9 to $19, and detailing services run $30 to $40. We chose the $11.95 premium wash, which includes something called "wheel bright." Inside the building there's a long hallway with windows so you can satisfy that voyeuristic urge to watch the pressurized water and soap blasting off the bird droppings and thick layer of road dust covering the windows. The waiting room is cool, sufficiently stocked with coffee, soda machines, an ice cream freezer, and a stand supporting bags of plantain chips. The television gets remarkably clear reception and is perpetually tuned to lurid but alluring telenovelas. Hours are 9:00 a.m. to 6:00 p.m. Monday through Friday and Sunday. On Saturday it's 8:00 a.m. to 7:00 p.m.